The Green Room set to return (yet again)?

The Green Room appears set to make another comeback — this time with a valid operating license. While we've yet to hear from the restaurant's ownership regarding a possible return, Municipal Licensing and Standards Supervisor Alice Xu confirmed that a license application initially made in November of 2010 is nearing its final stages. "We're waiting on a last set of declarations from the owner. We've faxed documents to the company's solicitor, but the paperwork has not been returned yet. Once that's done and we're satisfied, we'll issue a license," Xu explained by phone earlier today.


This is the latest chapter in an extended tale of the restaurant's attempt to re-open. Initially shut down due to multiple Public Health violations in September 2010, an MLS tribunal less than a month later revoked the operating license of a putative new owner on the grounds that he was a front for those who oversaw the Green Room during its years of health violations. 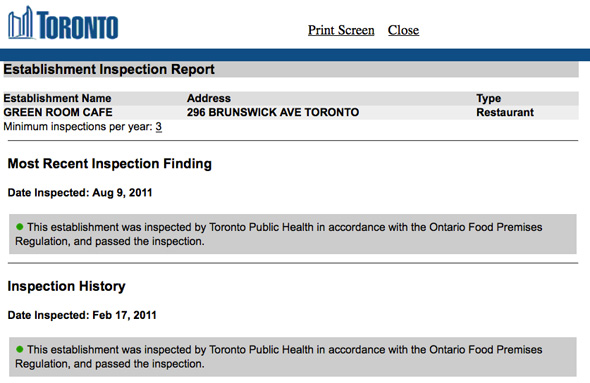 Then, in February of this year, despite the fact that the restaurant briefly re-opened, Ontario Ltd. 1836551 — a company which someone by the name of Jessie Tong claims ownership of — was refused a license on account of concerns related to what MLS spokesperson Bruce Hawkins then characterized as "City of Toronto investigations." At the time, the business was given until March 24th, 2011 to request a hearing before the Toronto Licensing Tribunal.

It did make such an application, but it appears that such a step may be avoided if MLS is satisfied with the latest stage of the application process, one which hinges on the establishment's ability to quell concerns over the history of health violations at the location.

Calls to the Green Room earlier today were met with a message indicating that the phone number is no longer in service, so it's not yet possible to share what the intentions of the restaurant are as far as a possible re-launch goes. What we do know right now is that it passed a DineSafe inspection on August 9th and appears on track to return.