The best dive bars on Queen Street are all curiously populated. In the early afternoon. On weekdays. Alas, there must be something about barred windows I'm just not appreciating. These so-called dive bars--despite their desperate lack of light, sullen dĂŠcor, and lonely solo taps--seem to serve an unrelenting clientele, keeping them in business as the friendly watering holes next door. Nevermind occupying some prime Toronto real estate. Mill Street Organic wha..? No, not here. Think cold beer and men in baseball caps.

In an effort to better appreciate the charm and appeal of some of Queen Street's most popular watering holes I spent an unspoken number of hours dive bar hopping from Leslieville to Parkdale. And all my effort has come to this - a list of the top five dive bars on Queen Street.

Tasty Chicken House, 1014 Queen Street East
Don't let the name fool you--I found little evidence of tasty chicken here. Instead I came across leering eyes, a tap pouring some sort of beer the bartender could not identify, and a jukebox blaring "American Woman" by The Guess Who. But it was the misleading signage that really ticked me off. That's not even a chicken, Tasty Chicken House; that's a rooster! 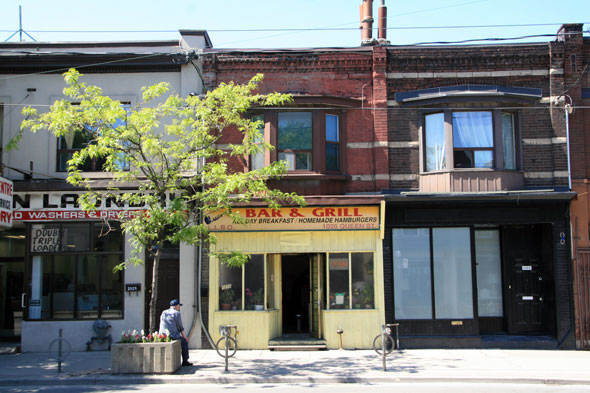 Queen's Bar & Grill, 1026 Queen Street East
Queen's Bar & Grill is just a few doors down from Tasty Chicken House in Leslieville, identifiable by its faded yellow exterior. All day breakfast? I wouldn't count on it. But perhaps the Christmas lights around the windows will cheer you up some. That or the knee-level grungy bar over which you can enjoy an anonymous draught beer. Though most people here seemed to be enjoying the walls or a crossword. 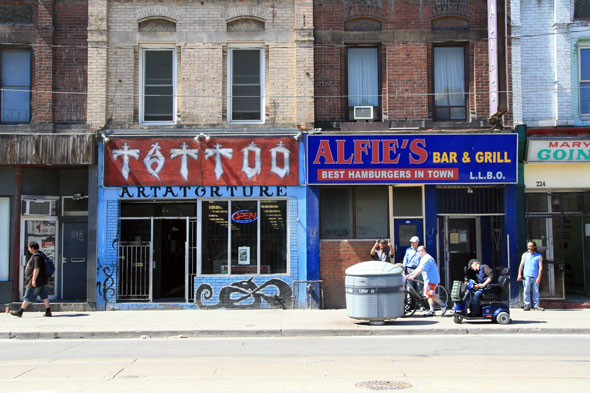 Alfie's Bar & Grill, 222 Queen St East
Alfie's Bar & Grill in Corktown advertises the "Best Hamburgers in Town," and perhaps as testimony to the quality of the product, someone has traced "Eat Me" in one of Alfie's dirty windows with his finger. I wonder if this place takes reservations? Alfie's is overwhelming dark but inexplicably packed, and I'm greeted by many patrons as I saunter through the door. Hockey posters on the wall, several men around a pool table, and lots of retro beer mugs no one here would likely call "retro." 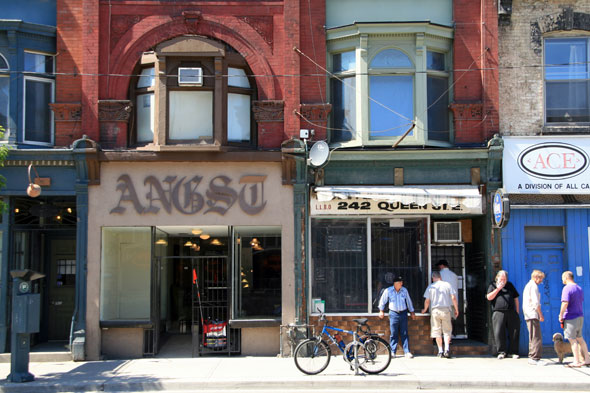 Buffalo Restaurant, 242 Queen St. East
I have to pass through a barred gate, but somehow, I make it inside. Buffalo Restaurant is clearly where pitchers are king, each positioned proudly on tables around the bar. The dark tables and chairs accent the black and white checkered floor, and Linkin Park screams inexorably from some source inside Buffalo Restaurant. The party is nomadic, switching from inside the bar to outside on the sidewalk.

Happy Time, 1384 Queen Street West
This is Parkdale's claim to dive bar fame, with its notorious scooter patrol parked outside on warm days and a bustling (or... maybe just present) population inside every day of the week. Happy Time fits snuggly into the dive bar profile, complete with dark and dingy feel, a largely ignored billiard table, and a chalkboard menu that is hopelessly misleading.

With apologies to Annie's at Queen and Parliament which just missed the cut. Did we miss your favourite dive bar? Add your suggestions to the comments below.