As far as neighbourhoods go, Queen West is one of the more frequented patio destinations in the city. Its generous sidewalks and generous foot traffic make places like the Black Bull, Rivoli and The Horseshoe Tavern some of the best places in town to get drunk outside.

It seems like a recipe for success all its own, really. Got real estate on Queen Street? Build a patio â you'd be stupid not to. And while that's probably not exactly what went through the heads of the folks at BQM Diner when they opened their doors, it might as well have been.

The BQM Diner is the newest member of the Burger Shoppe family and maintains a pretty similar menu to the other locations except in one particular category. In a nod to the buildings previous tenant the Stem, this location does an all day bacon and eggs breakfast. And why not enjoy that breakfast on the street side patio?

Who goes there?
People tend to get a bit loopy when the sun pops out on Queen West, especially after they've been starved for it for so long. Spring has been a bit of a non-starter this year so when the nice weather finally hit people flocked to patios like moths to light. So who exactly will you find here? Just about anyone looking for a seat. 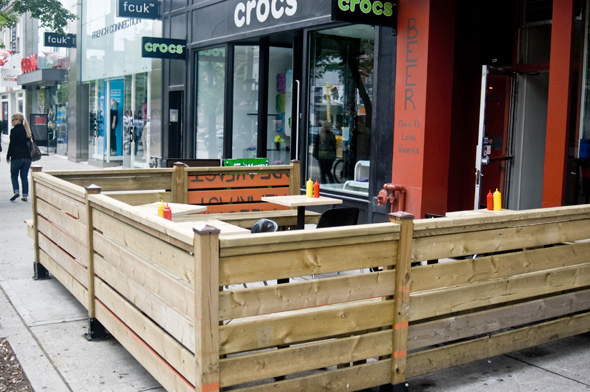 Grub and libations
They have other things on the menu, but when you go to BQM you should probably get a burger. There are plenty to choose from, but for my money the B&B (blue cheese, bacon, red onion, Dijon - $9) is the only one they need. Pair that with a $12 pitcher of beer and you're got everything you need. Is there really a better way to spend a day than on a sunny patio with a juicy burger and inexpensive beer? I think not.

Odds of scoring (a seat)
As I said, this is Queen Street so expect competition in staking out a seat. That being said, it's not impossible. It just takes a little bit of patience and luck. Bribes/threats work sometimes too, but you didn't hear that from me.

A view to a ...
It's a toss up between Yorkville and Queen West for the people-watching crown of Toronto. Both have their advantages, but I have to give top honours to Queen Street if only for the dudes above Get Outside. Keep an eye out for these guys, they like to have shirts off techno parties where they mostly just do their best Jersey Shore impressions and slam coolers â it's more entertaining than its sounds, I promise.

SPF recommended
There are no canopies at BQM, so make sure you're properly covered. On the plus side, the sun will continue to barrel down Queen Street pretty much until it hits the horizon line, which extends the patio day as long as possible. But keep in mind, with so much pavement and zero shade it can get HOT out there. Not so much right now, but come July and August be prepared.

Overall impressions
The BQM patio itself is nothing particularly special, just a little fenced off area on the sidewalk. But that's all you need when you have a vibrant neighbourhood providing the entertainment. Sometimes a patio needs to create its own vibe and other times, it just needs to exist. At the BQM Diner, existing is enough. 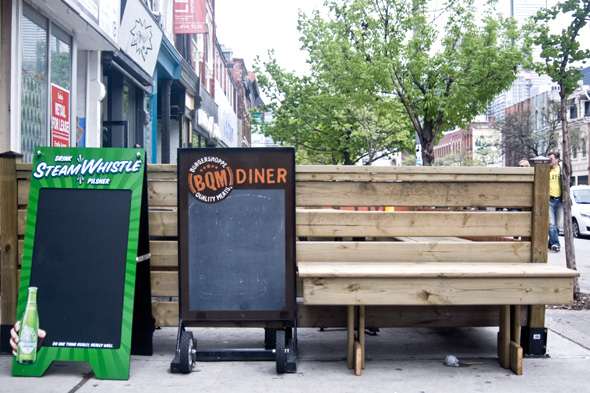