Has Cora Pizza finally got the message?

Last December, we reported that Cora Pizza had been shut down by Toronto Public Health (TPH) due to a rat infestation and other unsanitary conditions. Since then, it appeared that the pizzeria had gotten a handle on their food safety, having passed inspections made shortly after their closure and in late April.

A TPH visit last week, however, revealed some of the same problems that Cora had in December were back. With the restaurant now closed for renovations, could it be that ownership is finally making a more pronounced effort to address these longstanding issues?

The June 7th inspection, which resulted in a conditional pass, cited the following infractions: 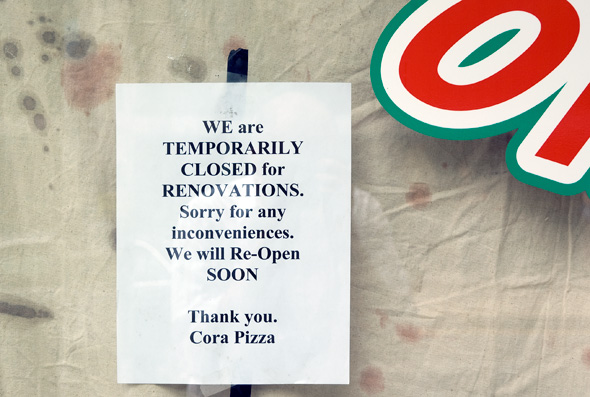 Of the items on the above list, the restaurant was fined for infractions one, three and five. Still, one day later, inspectors were back through Cora and gave it a full pass.

Contacted by phone, Jim Chan, a TPH Food Safety manager, explained that this is standard practice. Upon reception of a conditional pass, restaurants are given 48 hours to address the violations that they've been written up for.

But is 48 hours enough to time to address rodent control issues? Well, according to Chan, in this case it is. Reviewing the inspector's on-site notes, he reports that "[Cora] does have a rodent control system, the problem was with rodent proofing." Control involves trapping mechanisms and the like, while proofing is the measures taken to disallow rodents from entering an establishment in the first place. As such, fixing the problem in a short period of time is quite feasible.

It's for this reason that I was somewhat surprised by Cora's recent closure. Chan confirmed that due to the pass the restaurant received on the June 8th inspection, no additional work on the structure was required by the City.

So, it would appear that there's reason to be cautiously optimistic that Cora is getting the message. Ownership indicated to the last inspector that they were planning to find a better solution to their rodent proofing issues, and my visit to the pizzeria confirmed that renovations are underway. 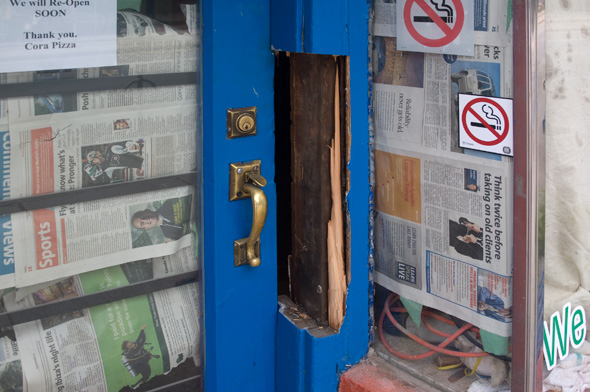 It is, however, tough to know the extent of the work taking place. Although one can peek in through a crack in the front door, information from the source is decidedly sparse. A message on their phone reads simply, "Hello, thank you for calling Cora Pizza. We are closed temporarily for renovations. Sorry for any inconveniences, and we look forward to hearing from you soon."

The brief encounter I had with an unidentified worker at the site was also less than helpful. When asked when the restaurant would re-open, he replied "next week." Other questions were met with grumbles rather than answers.

But, of course, they're not obligated to tell me anything. The fact is that they currently have a DineSafe pass and the renovations underway are completely voluntary. Perhaps the restaurant has, indeed, turned over a new leaf when it comes to food safety.