How can we better feed Toronto families in need?

The purpose of the campaign has been to raise awareness around the inadequacy of social assistance and to demonstrate what it's like to eat when most of your cheque goes to rent and transportation. Currently, about 700,000 people live on social assistance in Ontario.

The first phase of campaign collected the input of over 5,000 people through an online survey that asked them to estimate what they thought a single person needed to live in "dignity and reasonable health" during the course of a month in Ontario.

An average was calculated and the estimate came in at $1,400. Ontario Works offers $585 per month for single adult on social assistance. Even a person working 35 hours/week at minimum wage ($10.25) is only making $1,425 before taxes.

Phase two of the campaign, called Eat The Math, wrapped up yesterday with a community town hall meeting at the Artscape Wychwood Barns. Eat The Math challenged ten high profile Torontonians like activist Naomi Klein, singer Damian Abraham, city councillor Joe Mihevc and his family, and Toronto's Medical Officer of Health Dr. David McKeown to live from a standard issue food hamper for as long as they could. 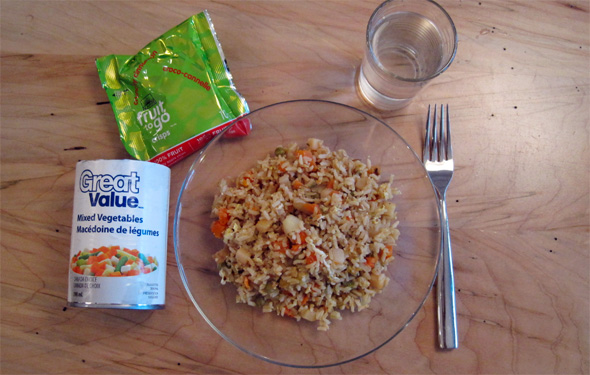 About 200 people were in attendance at the town hall meeting to hear about the experiences of the participants (also documented in a blog). Most had trouble stretching the hampers they picked up from the Stop's food bank beyond a few days, let alone the week that the Stop estimates most people aim for. Several participants supplemented their hampers with drop-in meals at soup kitchens.

A hamper for a single individual generally contains $25 worth of food and might contain something like: 2 potatoes, 2 onions, 1 carrot, 2 tomatoes, 1 bag of rice, 1 can of tuna, 4 eggs, instant oatmeal, 1 litre of milk, 1 package of hot dog wieners, 1 can of soup, 1 tin of tuna, and 1 jar of peanut butter. At The Stop food bank, visitors can pick up a hamper once a month. 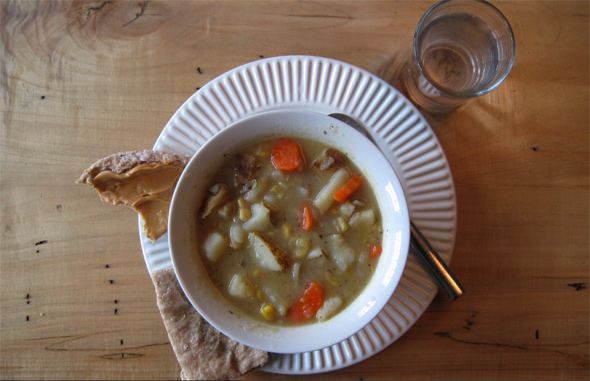 While following each of the participants through the challenge a few things kept coming up over and over again. Aside from the fact that most mentioned feeling socially restricted and deprived of choice, they were hungry. Getting by on rice or canned soup beefed up with hot dogs was not enough and it was impacting their day-to-day lives with headaches, crankiness, an inability to concentrate, and depleted energy.

That wasn't surprising since food hampers are heavy on shelf stable carbohydrates and processed foods high in sodium, and they are severely lacking in fruits and veggies (nowhere near the 5-10 servings per day as recommended by Health Canada).

In fact, according to the Nutritious Food Basket Survey (similar to the Consumer Price Index) done annually in Ontario, the cost is beyond what those on social assistance can afford.

Unsurprisingly, another theme that came up repeatedly in the meeting was Toronto's economic disparity, but what surprised me was that, according to Wayne Roberts head of the Toronto Food Policy Council, 21% of families live below the poverty line. Naomi Klein likened it to the existence of two different cities with too few points of intersection between them.

The math breaks down like this: a single person on Ontario Works is given $585 a month to live on. Of this, $364 must be spent on shelter leaving $221 for all other expenses (food, clothing, transportation etc). That leaves little money for food, and is why thousands turn to food banks and drop-ins for help making ends meet.

Nick Saul, the Stop's Executive Director, said the goal of this campaign isn't to criticize food banks, and he doesn't think food charity is the answer either. As we've seen throughout the winter and now into the spring, food banks are struggling to bring in enough food. What The Stop and other activists are calling for is a $100 a month Healthy Food Supplement for all adults on social assistance. 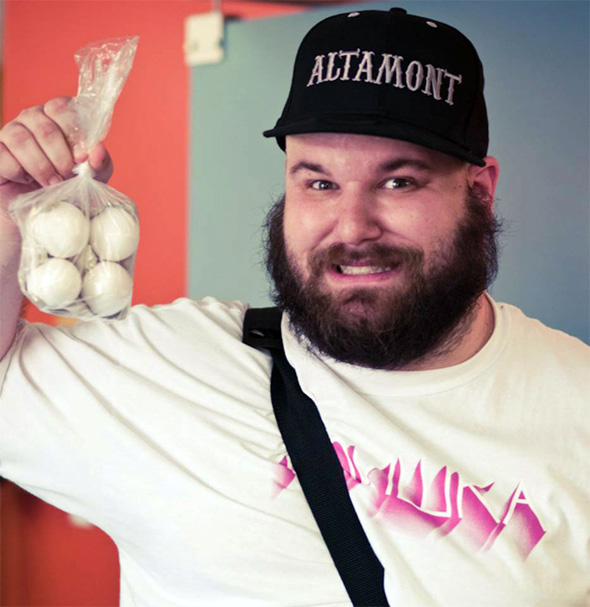 This is by no means a clear cut or easily navigated issue - detractors ask if increasing social assistance will just make it more comfortable for recipients and decrease incentive to find work, how we will know if increased money translates into healthy food choices, or will a food supplement actually be spent on food at all? The Ontario government has just announced it is cutting a Special Diet allowance for those on social assistance who are sick or have health-related food issues because of suspected abuse.

Coincidentally, Eat The Math participant Naomi Klein happens to suffer from several health-related dietary restrictions. She had to turn away a number of the items offered at the food bank and would not be able to survive on food hampers alone. She argues a Special Diet supplement wouldn't even be needed if people had adequate assistance to feed themselves properly in the first place.

The idea of welfare stereotypes persists and was touched upon several times at the meeting - that those receiving assistance are lazy cheats suffering from any number of character flaws and making a conscious lifestyle decision. Councillor Joe Mihevc argues that "poor bashers" are the minority and that most people agree that social assistance should provide the means to meet basic needs.

The meeting ended in typical grassroots style with a quick break-out brainstorming session to come up with ways of effecting change. Among them were suggestions of a province or even country-wide undertaking of the Eat The Math challenge, kind of like The 30 Hour Famine.

A more extreme idea was for a class action lawsuit against the government for nutrition related health ailments among those on assistance (a la McD's trial ). Still others included building increased awareness around and sensitivity to poverty in educational curriculum.

One thing was certain, there were a lot of people there ready to start working hard to make change happen. And that, according to Klein, is one the reasons the Stop is so great - they undertook this campaign as a way of creating public discourse. Nowhere has there been an ask for money or food donations. The main drive of this campaign has been advocating on behalf of the people they serve.

Photo of the soup and rice meals by Andrea Curtis, others by Magda Olszanowski.