The cold and wet summer we've been having means Ontario field tomatoes have been delayed. Generally speaking heat=sweet, and having said that we can expect blander tasting tomatoes and smaller yields all around. And yes, these less than ideal growing conditions have been ideal breeding grounds for blight, a pesky little fungal infection that can take out entire crops of potatoes and tomatoes. Being a tomato farmer is a hard gig these days.

So give it up to the tomato farmers of Ontario, cause the field tomato season is gearing up and there are still plenty of reasons to be excited about one of the world's most versatile foods.

Tomatoes originally came to us from the highlands of Peru. These early tomatoes diversified into the varieties we know today. Somewhere along the way tomatoes made their way to Mexico and were popularized by the Aztecs. In fact, ancient Aztec writings document that tomatoes were often eaten with peppers, corn and salt - the original salsa. 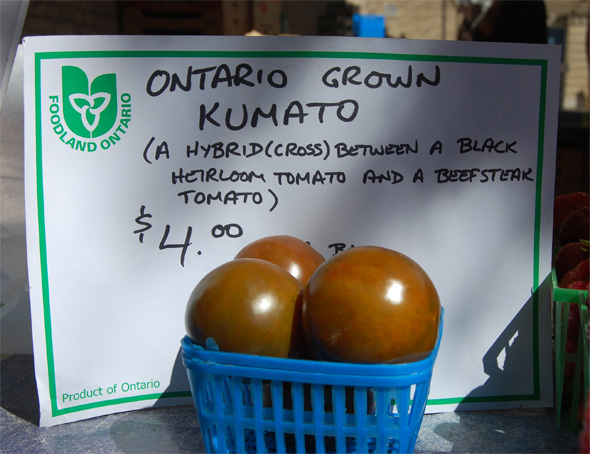 Heirloom (or heritage) tomatoes refer to varieties that are open pollinated and therefore non-hybrid. They have become increasingly popular with home gardeners and organic farmers in recent years because they tend to produce more interesting and flavourful fruit. They are, however, more susceptible to pests and disease which is why they have not been widely picked up by commercial producers. Anything goes with heirlooms, you can find them in red, yellow, green, pink, black, white, and purple with a variety of flavour profiles ranging from light and sweet to earthy and intense.

Should I even get into what you can do them once you get them home? Well, when they are plentiful and therefore less expensive I most often eat them cut into segments and tossed with fresh basil, salt, pepper and olive oil. I mean, tomato and basil? Can you think of a better, more natural pairing of two foods?

Depending on how I am feeling I may throw in some scallion and balsamic vinegar to mix things up a bit. Dipping a piece of crusty white bread into that oily juicy tomatoey puddle that's left in the end is enough to kill a man. Tomatoes are equally good with cucumber, red onion, goat's milk chili feta and olive oil. And then there is the whole world of traditional leaf lettuce salads.

The little cherries are great for a quick al fresco style pasta dish with olives, feta and lemon juice. And who doesn't love a simple sliced tomato, mayo, salt and pepper sammy (Montreal style bagels are awesome for this). 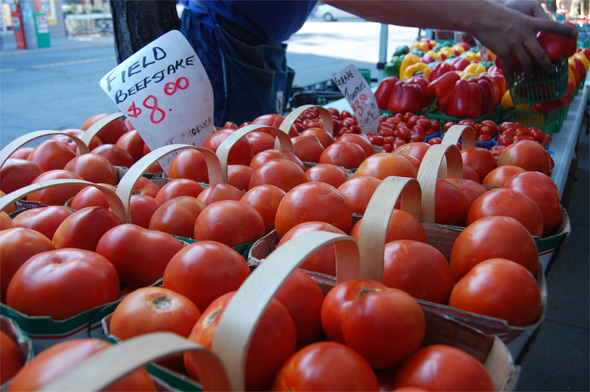 When the summer is waning, it's preserving time. When I was a kid this was a huge family production where we would get together and devote days to cleaning, skinning, cooking and preserving Roma tomatoes for the winter in my great uncle's backyard. I can still remember the smell of it all. Since I now live in a condo far away from my family, all I need to do is take a walk through residential Little Italy to get in on some of the fun.

While I could go on forever, I will instead leave you with the urgency that I now feel to go and eat some tomatoes. Get it on while the getting is good.