With strawberries and cherries picked off and field tomatoes coming up soon, it is the time of season for all things red and juicy. Another Ontario raspberry season is upon us, and these tart and tangy beauties are now finding their way into the markets and grocery stores.

The raspberry is part of the rose family and shares the genus Rubus with blackberries, cloudberries, dewberries and salmonberries. Everyone thinks of the fruit as berries, but each berry is actually a cluster of drupes (fruits with stones in the middle like peaches or cherries). Raspberries can come in a wide variety of colours including white, yellow, orange, pink, and purple. 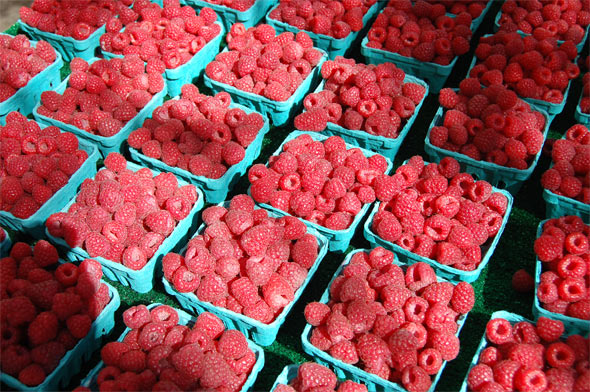 So what to do with these little red gems once you get them home? Aside from the classical use of raspberries in sauces, syrups and coulis, there are about a million other ways to enjoy them.

Ice creams and sorbets are one of my favourite ways to get into raspberry season, as we descend into the heat of late July and early August. This year, though, I might be more apt to wait a bit for the berries to start tasting really good, then whip up a crumble and throw on a sweater.

If you're not into the chocolate thing, raspberries pair well with so many other flavours. Like a simple white cake doused in raspberry simple syrup and covered with thinly sliced nectarines. How about raspberries atop lemon curd in mini-tartlette shells? Or with yogurt for breaky?

Then there's the savoury stuff. Raspberry vinaigrette is an old summertime favourite, on Ontario leaf lettuce with a good goat cheese like the Prestige and toasted pecans.

When fall comes I pull the fruit and berries I have frozen over the summer and jam out. Literally, I make jam. This year I plan to experiment with raspberry and peach, and straight up raspberry.

Which reminds me, perhaps the best (and most often under-appreciated) way to enjoy raspberries: simple and straight up. Just wash and enjoy. And raspberries are another pick-your-own (PYO) fan favourite.

We can enjoy Ontario raspberries right into September, but no better time than now to pick some (up) and add a little tang to your repertoire.