On Victoria Day, the City of Toronto launched its long anticipated and hotly debated A La Cart street food program. It's a program, overseen by the city, that is supposed to expand our street food options and bring more diversity to our otherwise hot-dog-saturated market. A La Cart is beginning its three-year pilot program with eight vendors.

On the day of the launch, I visited each of the four carts slated to be opening. At the end of the day, I was only able to sample food from three.

So this past week I bebopped and scatted my way around the city to try the remaining five carts. The trouble was, I could only find two of them. The other three were missing in action. Has anyone else had this problem?

Being a lover of food and a lover of the city, I was more than happy to travel around to sample the remaining carts. So I went onto the City of Toronto's A La Cart website to get the coordinates for each cart. Initially, I was impressed with the level of detail given - they even included maps!

I decided to divide my efforts geographically into three trips: one to Metro Hall and Roundhouse Park, one to Queen's Park, and one to Mel Lastman Square and Yonge & Eglinton.

Here are my results: 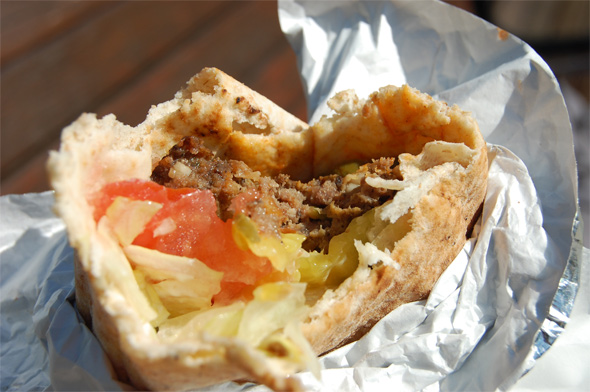 Location: South side of King St. West, on the east side of Metro Hall, west side of Roy Thomson Hall

Menu: Afghani/Central Asian inspired. Serving up Chapli kebabs, a spiced ground beef patty with lettuce, tomato, pickles, and "secret" hot sauce on a pita for $5 including a drink (sodas, OJ, water). They also sell 3 types of samosas - chicken, beef and vegetable for $2 served with either a small tamarind or cilantro chutney. 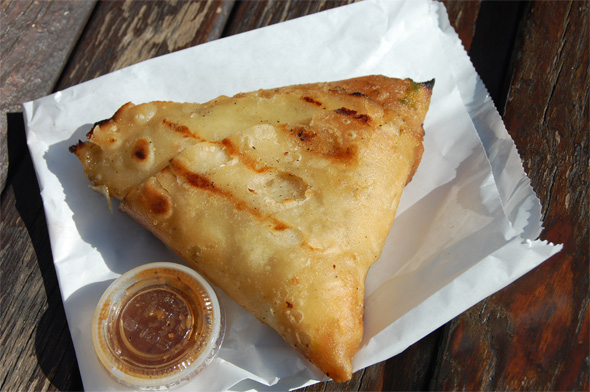 Rating: Chapli Kebab 6.5/10. The pita got really runny as you reach the end of the kebab, I ended up with a lap full of secret sauce. Veggie Samosa 7.5/10. Dipping sauces were yummy and they tasted equally good when warm and cold.

Supposed Location: South side of Bremner Boulevard, west of Simcoe before the Rogers Centre, right in front of Steamwhistle.

This is one of the locations I visited on the Victoria Day opening. The cart and staff were at the advertised location but hadn't set up yet. When I went back last week, the cart was gone. There is a lot of construction going on at Steamwhistle and I can only guess they have been displaced. I surveyed the surrounding area but could not find them!

Supposed Location: 5100 Yonge Street. Located on the Upper Square adjacent to Yonge Street at the south side of the fountain. I walked up and down Yonge to make sure they weren't near any of the dog vendors on this strip. One dog vendor told me that she still hasn't seen the new cart, and that she has heard that maybe they would be set up for Canada Day. 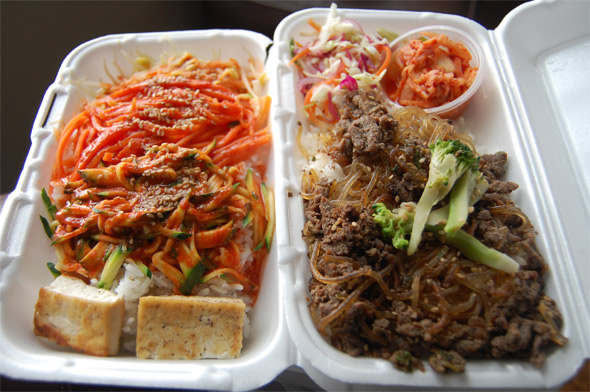 Location: On the north side of Eglinton Avenue, just east of Yonge.

Menu: Korean inspired. Bulgogi, marinated and fried beef served with kimchi, some fresh cabbage, noodles and rice for $6. All vegetable Bi Bim Bap, a medley of zucchini, been sprouts, carrots and tofu with a red chili paste served on rice for $6. Tokbukki (or Tteokbokki) is a popular Korean snack food of spicy rice cakes for $4 (but alas they were sold out when I was there). Pan-fried pork dumplings served with sliced scallion and soy sauce, four dumplings for $2. Drinks (sodas, juices, water) sold for $1. 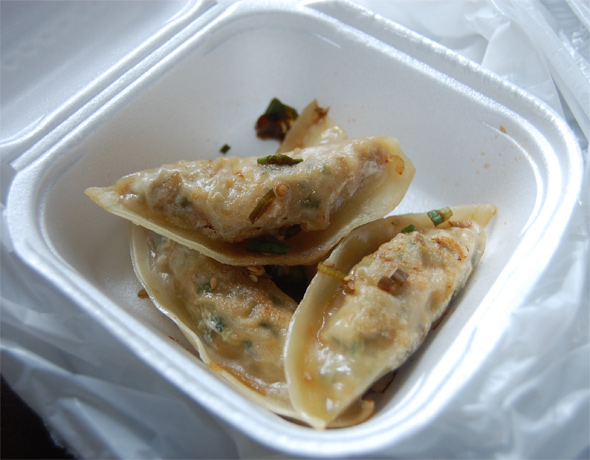 Rating: Bulgogi 7/10. It was raining when I visited and unfortunately I had to haul all the goodies home before I could eat them. First off I should say that the serving sizes for both dishes were more than generous. The beef was a little dry by the time I got it home, but the flavour was good. There was too much rice for the amount of beef (which was already generous). The kimchi was good, I generally like it pretty spicy, but I understand that they have to cater to a variety of palettes.

Bi Bim Bap 6/10. It was a little bland and would have been better with more sauce and less rice.

Pan-fried Pork Dumplings 8/10. These little buggers were tasty. Just the right amount of soy sauce and who doesn't like a little fresh sliced scallion thrown in for good measure?

I both called and e-mailed the A La Cart program several times over the last week and have had no response. Has anyone else sought out a cart but was not able to find it?

It could be that the carts are just not located where they city is advertising them to be. It could be (as in the case of the Mel Lastman Square cart) that they have not started business yet. It could also be that they have already folded for lack of business. In any case, it is both frustrating and disappointing (but not surprising) that the program is not running as it should be, and that my several attempts to contact the program's people have gone unanswered.