I am always interested in what food can tell me about a person. In "The Fridge Files" I provide candid snapshots into random and willing Torontonians' lives by categorically breaking down the heart (or maybe more appropriately the belly) of their kitchens, the fridge.

They keep invitin', so I keep diggin'. Here comes the fifth installation of me routing around in peoples' fridges.

You Can Take The Girl Out Of The Farm
Penny grew up on a dairy farm in Eastern Ontario. Growing up on a farm, it was a big production and long trip to ever go out for dinner so she grew up in an environment where meals were made and enjoyed at home.

Now living and working the busy Toronto life, Penny still cooks most of what she eats herself. She enjoys cooking, and enjoys the satisfaction and flavour that can be derived out of simple ingredients cooked in an honest and simple way. A crock-pot can be a busy girl's best friend. I found Penny and Phil's fridge well stocked with a lot of fresh fruits and veggies, and the freezer was stocked with frozen meats too.

Out And About
Although she thinks it's lame, Penny is devoted to Loblaws for her grocery shopping. She prefers the location at Leslie & the Lakeshore (the closer Queen's Quay & Jarvis location is too picked over, the lines are too long and the customer service isn't all that great). She also occasionally walks over to Kensington. In the summer Penny and Phil will hit up the St. Lawrence Market, and they love to do a trip out to the St. Jacobs farmers' market as well.

For the longest time Penny wouldn't buy eggs, she would just drive home every couple of months and pick up a few dozen from the farm (the dairy farm has chickens too!). Because they were farm fresh they would last forever. In the last few years her parents have also added bee hives to the farm, so all her honey comes from there too. 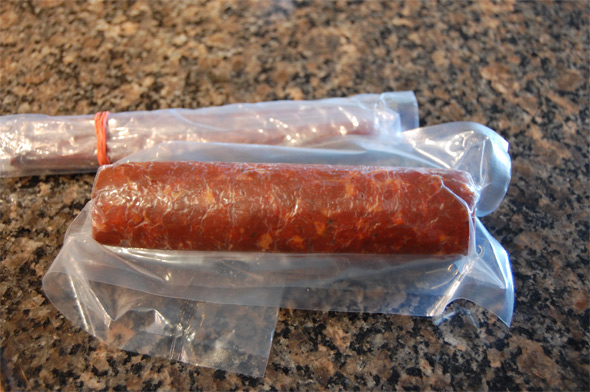 Game On
Penny's brother-in-law, Pierre, does a little seasonal deer hunting up in Northern Ontario. In fact, it's a family affair where they hunt, butcher and cook/cure the venison themselves. The result: cured venison "salami" in Penny's fridge. She quite enjoys it. 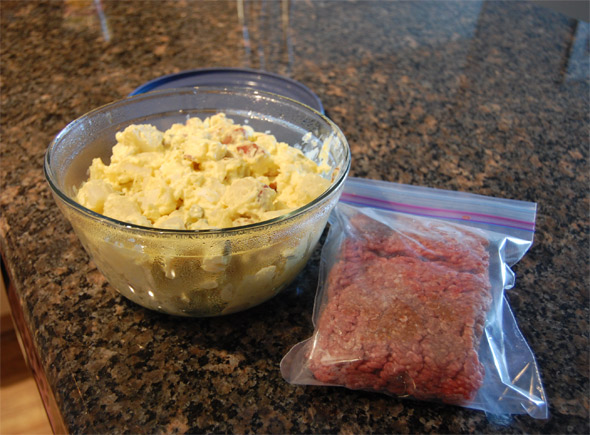 Another Shrimp on the Bar-B
Well OK, not shrimp. But when I visited Penny she was prepping for one of her first BBQs of the season. The crock-pot has been put away for the summer and now it's all about enjoying the freshness summer has to offer. In the fridge I found potato salad (with lots of egg, yum) and ground beef that will be transformed into burgers with egg, breadcrumbs, cilantro and grated cheese. 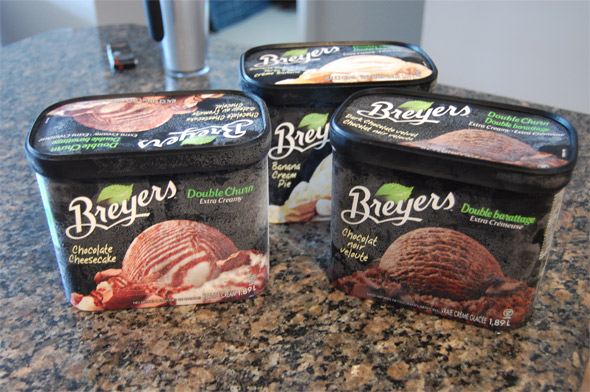 I Want To Live Here
I have no qualms about admitting to the (what some might call disgusting but what I like to call enthusiastic) amount of ice cream I eat. I just freaking love the stuff. So when Penny told me her latest assignment for Chick Advisor was to review ice cream, I did get just a little excited. So much so that she felt the need to offer me some right there and then. I politely declined and pulled out the four litres she had in the freezer. Among the flavours were Banana Cream Pie, Chocolate Cheesecake and Dark Chocolate Velvet. Uhhhhh, add to the mix the newest Breyer's ads with Jane Krakowski of 30 Rock fame and this is a case of marketing making me want to puke up my ice cream. 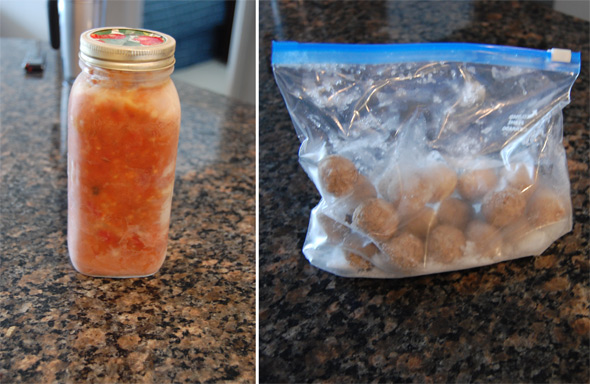 No Man's Land
It's the unfortunate truth, but the freezer is often the place that foods go to die. Penny admitted to this. With every intention of preserving certain foods to be on a later day, the freezer is where things like chili and mini-meatballs will sit for months before they get tossed. 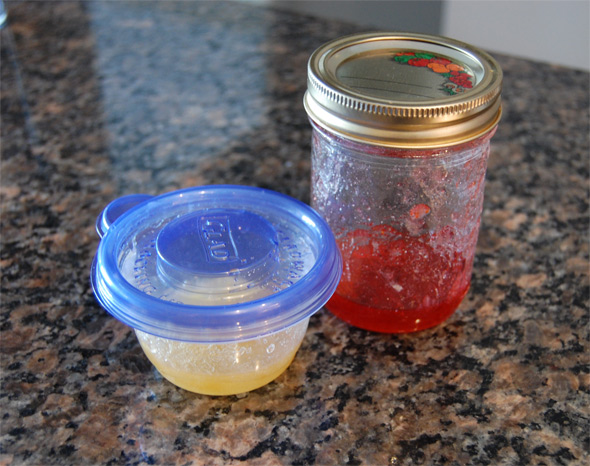 Penny continues to make jam, and is holding on to the last little bit of berry and peach jam she has from last season (she also made raspberry and blueberry too). This year she hopes to expand her preserving efforts into applesauce and pickles (though she is concerned that the smell of pickling might bother her condo neighbours).