Last Wednesday I attended one of City Bites magazine's Food + Wine Experience events. The Food + Wine Experience series was launched as a way of exposing diners to new ideas and philosophies around food while connecting them to the local food community by showcasing local chefs, using local ingredients and pairing with local wines. The theme and focus of the evening is left up to the chefs.

For the third and final event of the spring series, Chef Mark Cutrara of Cowbell was on hand at the St. Lawrence Market's new cooking school and event venue to guide us through a steak tasting. Cutrara was joined by Carrie Oliver of the Oliver Ranch Company, a California-based company that procures and educates the public about artisanal beef.

While the food and wine experience itself was great, there was an educational slant to our eating - not so much in trying to preach the merits of the local food movement (at least not outright), but more in helping the diners understand a little more about the food itself. 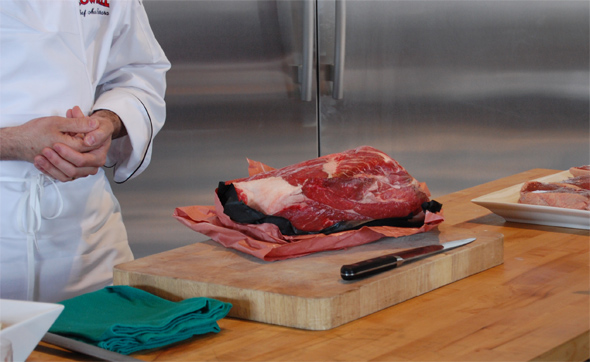 Oliver started out the evening with a quick presentation about how factors like breed, feed, handling and environment can effect the flavour and character of beef. She likened it to wine tasting, where provenance, grape variety and environment effect the flavour of wines. Four different Ontario steaks of the same cut (top sirloin) were prepared in the exact same way (salted, pan seared, and finished in the oven) so that the impact of these factors would be evident.

The wine pairings were done with four of Tawse Winery's Pinot Noirs, two of which have not been release to the public. Tawse is an Ontario based producer located on the Vineland Double Bench of the Niagara Escarpment. 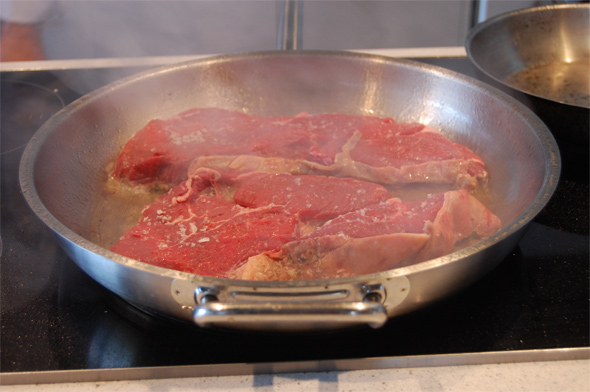 While Chef Cutrara cooked each of the four steaks, we were given tasting guides where we took notes and ranked the steaks on things like texture (tough, nice bite, like butter or mushy), personality (reserved, direct, adventurous), and impression (brief, long lasting). We also gave our impression on flavour notes, which for me ranged from metallic to caramelized vegetables, to liver, and asparagus. 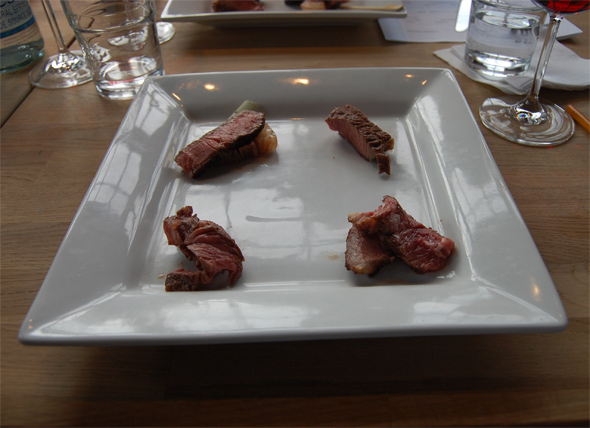 Generally it seemed that most people preferred the wet-aged steak from Fieldgate Organics because it had the most "traditional" flavour. I really liked the Ivanita Farms steak as well.

City Bites plans on launching a complete program of Food + Wine Experience events that will span a wide variety of chefs, themes, and venues in the fall. And with a $50 price tag for the full meal and wine pairings, it is well worth it.

Chef Cutrara will also be hosting a series of Farmers Nights at Cowbell once per month from June through October, where he will prepare a five-course menu using ingredients from one farm. The dinners will also feature a wine pairing from an Ontario winery. The Farmers Nights are $90 for the five-course meal plus $50 for the wine pairings. Check out the Cowbell website for more info.