The results are in: after seven weeks and eleven restaurants, a group of young food critics from Parkdale Public School (aka the Parkdale Pumas) have eaten their way across Queen West and made their final judgments.

Last night at the Gladstone, the Pumas dished out awards like "Scariest Bathroom" and "Coolest Chef" at the Eat The Street Awards Ceremony.

Following last year's success of Parkdale Public School vs. Queen West Round 1 (which included the Pumas giving haircuts to willing adult participants, cooking up meals at Coca, and shooting a film), MDR rolled out round two in a "critical dinner series" called Eat The Street.

Completely open to the public, Eat The Street was a series of eleven dinners at eleven Queen West restaurants. After receiving a primer on the finer points of critiquing food from Coca's Nathan Isberg, the kids were unleashed on the neighbourhood.

According to MDR, Eat The Street was a chance for the public to "dine with the future of the neighbourhood and the future of Toronto." O'Donnell believes that kids should have the same rights as adults, and by giving them the ability to cut hair, make films, or critique restaurants we are giving them an empowered childhood. Opening these events to the public and weaving them into the day-to-day fabric of the community just adds to this empowerment and provides a real-time interactive performance. 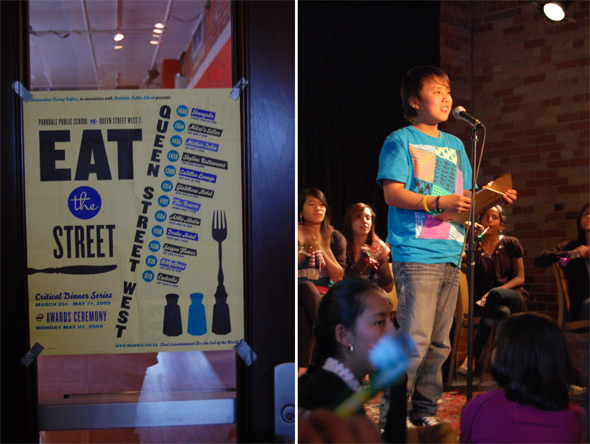 At the award ceremony last night they dished out hand-made awards, some of which included:

Regardless of the criticism of O'Donnell's work as art, it was certainy clear to me that the kids had a good time and got to experience something that they would not have otherwise been able to. In my opinion, opening up the stage for critical thinking about the food they eat (or anything for that matter) is a worthwhile exercise - and if it means good eats and good company in the process then let the streets be eaten.