I was on hand at Slow Food Toronto's "Do It Slow Banchetto" dinner on Friday, May 1st at U of T's Hart House, where over 300 food lovers gathered to hear Petrini speak and (slowly) feast on a collaborative five-course meal from 25 of Toronto's Slow Food chefs.

Wearing two toques, so to speak, I was able to both cook and cover the behind-the-scenes happenings of the slow food event of the year. 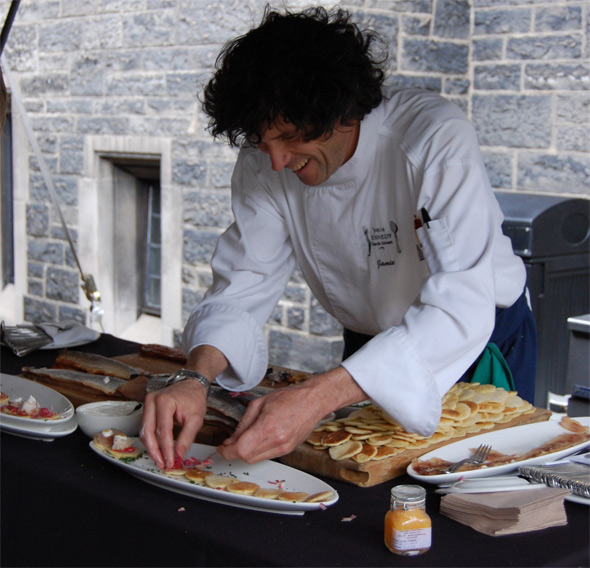 The evening kicked off with an outdoor Canadian cheese reception hosted by Jamie Kennedy, featuring hors d'oeuvres from Kennedy himself and cheeses from Glengarry Fine Cheese (Ontario), makers of "Le 1608" Laiterie Charlevoix (Quebec) and David Wood's Salt Spring Island Cheese (B.C.). What better way to wash that cheese down than a little Canadian wine from Cave Spring, Chateau Des Charmes, Featherstone and Henry of Pelham? 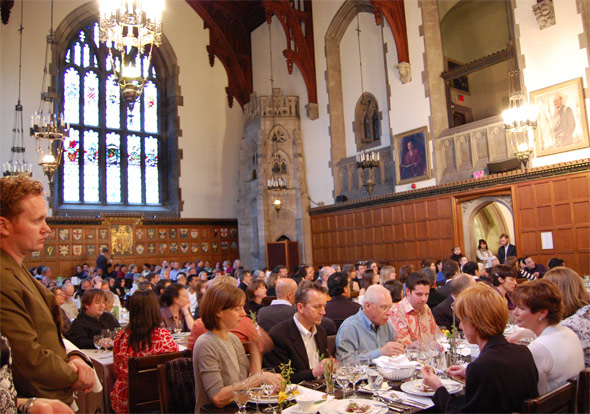 From here guests made their way into the great hall for dinner, where they were seated at tables ranging anywhere from 10-22 guests and served family style.

The menu was the culinary culmination of twenty-five very different styles and approaches to cooking coming together to showcase the best of what Canada has to offer.

From concept to execution, each of the five courses was a collaboration of four to five chefs. Each element stood as an expression of a particular chef's individual style and inspiration but also fit into the cohesive whole of the course.

Sounds romantic and relatively straightforward in principle, right? Let's not forget we're talking about a collaboration between 25 chefs - with the real possibility of a "too many cooks in the kitchen" situation arising.

But that was one of the things that struck me most, the relative efficiency and smoothness of service, and the collaborative (indeed convivial) atmosphere. No Gordon Ramsay outbursts here.

The general vibe of comradery meant that service was a true group effort with everyone pitching in to help in any way they could (which aside from being a brotherly thing to do, I know has a lot to do with a cook/chef's inability to stand still on the job).

The menu was so extensive that I will have to focus on my own personal highlights, and in true slow food style the meal spanned from 6:30pm until about midnight. 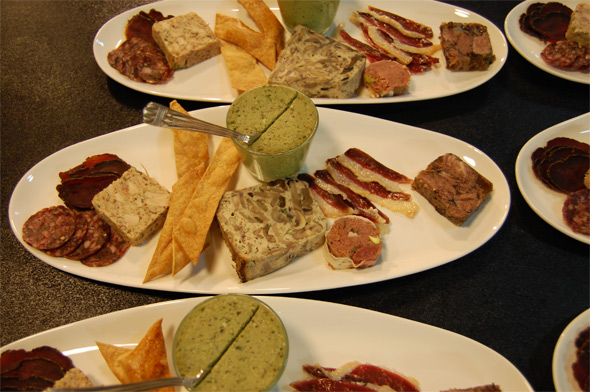 The first course, dubbed "Charcuterie Masters", was the one I had worked on and featured tasty morsels like venison couveture salami and elk bresaola from Chef Mark Cutrara of Cowbell, cold smoked duck breast from Chef Sharon Bergey of Jamie Kennedy Kitchens, and mushroom chicken cognac terrine from Chef Karen Viva-Haynes of Viva Tastings.

Between courses Petrini spoke with the help of an interpreter. His message was one of hope for redefining global food systems, getting back in touch with local food traditions, and rekindling the public's interest in the food they eat. His address was fairly short, but on the following evening he had the opportunity to more fully delve into his own personal beliefs and those of the Slow Food community an event co-hosted by the Planet in Focus and the Italian Cultural Institute.

Following the fish was an intermezzo course of lovage sour freezies by Michelle Fernandes of C5.

Keeping true to snout to tail dining, the fourth course was "The Whole Tamworth Pig" and featured roasted belly and loin, jowl and trotter ravioli, ham cooked in Red Fife and hay crust among other porky treats. The serious undertaking of this course was done by Chefs Teddy Corrado of C5, Bertrand AlĂŠpĂŠe & Jason Inniss of 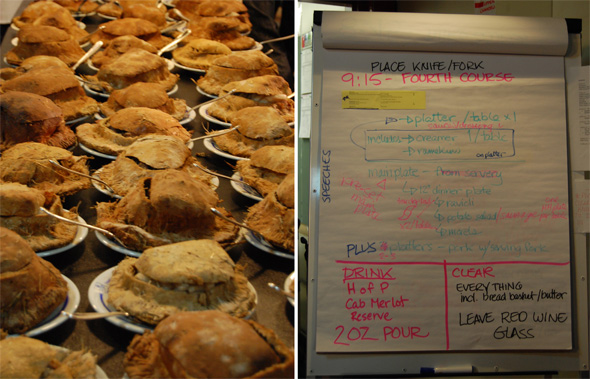 Amuse-Bouche, Anne Yarymowich (though not in attendance) of Frank, and Anthony Rose of The Drake.

Last, and certainly my favourite course of any meal, was the dessert "Honey Four Play." 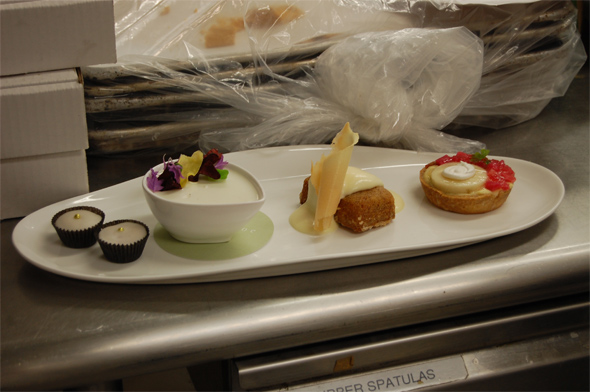 A honey pie featured yet another part of the Tamworth pig - its lard for the crust. There was also a goat's milk panna cotta and a honey lavender fudge. The collaborators on dessert were Rachelle Cadwell of J.K. Kitchens, Chantalle Noschese from Canoe, Michelle Fernandes of C5 and Chrystal Porter of Palais Royale.

At the end of the meal Arlene Stein, Director of Events & Catering at Hart House, recognized each chef individually by calling them up on stage, where they were met with a heartfelt round of applause. The night had definitely been a big and truly slow success.