The "Other" Underground Supper Club in Toronto

I'm on a street all Torontonians know (I've been asked not to divulge the exact location). And I'm pretty far West. Almost Mississauga West.

I walk up to a non-descript but deliberately chic storefront, windows tinted so that you cannot see inside. No signage. The only indication I have that I am in the right place is the numerical address.

No, this is not the latest Charlie's Burgers event that everyone has been peeing their pants over. And yes, had I been there I probably would have peed my pants too (but responding a mere 5 minutes after the invite's gone out is not quick enough so I did not get in). The off-putting elitist air aside, Charlie's latest event did boast Chef Martin Picard, from the celebrated Montreal resto Au Pied de Cochon and Jamie Kennedy's sommelier Jamie Drummond [EDIT: Martin Picard was not actually at the event. His signature dish "Canard en Conserve" was flown in from Montreal]. Nevermind the who's who of the Toronto food scene who attended the four-hour "eating and drinking orgy."

This is the other underground supper club I reported on last month, The Hidden Lounge. I attended their monthly dinner party the same night as Charlie's event was happening.

But the Hidden Lounge takes a totally different approach. The events are open to anyone in the hopes of attracting a more diverse group, as opposed to the somewhat more elite group that must charm or network their way onto the invite list for Charlie's events. All you need to do is RSVP that you would like to attend (they host monthly dinner parties and dinner service from Sunday-Tuesday) via phone or e-mail.

The Hidden Lounge's owner/Chef, Durant Ellis, did his apprenticeship at North 44 (back in the days when McEwan was still actually cooking) and then spent 7 years at Il Fornello. The Hidden Lounge has been running since May of last year, and has had enough success to move out of Durant's loft on Dupont to a bigger space that once housed a restaurant and is now used exclusively for the Hidden Lounge.

The supper club is a registered business, but since the dinners are technically private functions they have managed to stay in the grey area of the law.

On the night I was there, I dined with 8 strangers. Six of them were somehow affiliated with law enforcement, while the other two were the owners/operators of a Toronto murder mystery dinner theatre company. They had all heard about Hidden Lounge through word of mouth, despite media coverage in publications like the Globe & Mail and the Toronto Star. 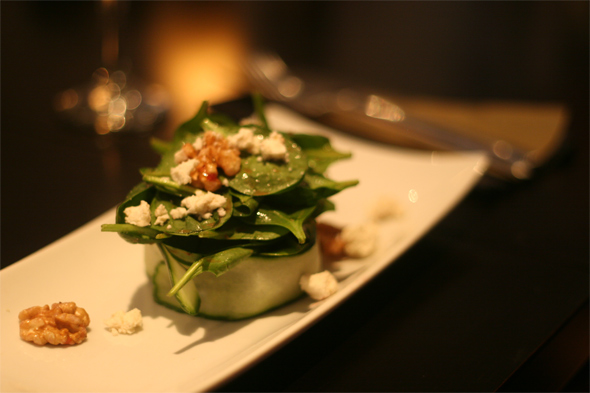 The meal was a four course prix-fixe meal for $45 (BYOB), and they were very accommodating for vegetarians. The first course was an espresso brown sugar crusted quail, served atop a cantaloupe and roasted red pepper salad. The veg option was an arugula salad with candied walnut and goat cheese. 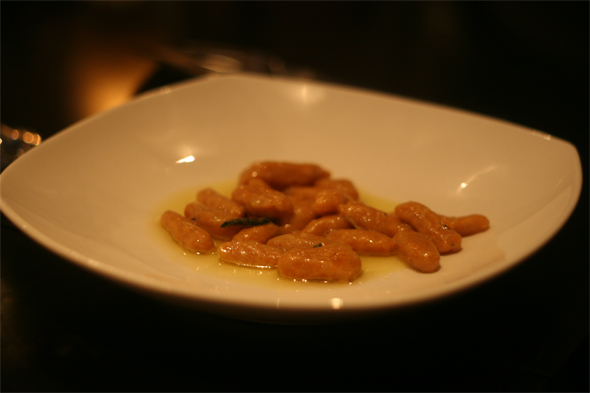 The second course was sweet potato gnocchi with sage almond butter sauce. While the butter sauce was well done, the almonds were MIA. The gnocchi itself was a little tougher than I would have liked it, perhaps because it was made with whole-wheat flour. 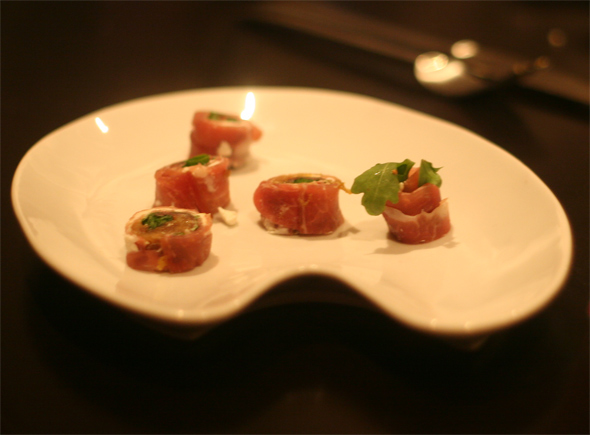 Next was a prosciutto roll with arugula, goat cheese and figs. The veg option was a variation of the same, wrapped in rice wrappers instead of prosciutto. 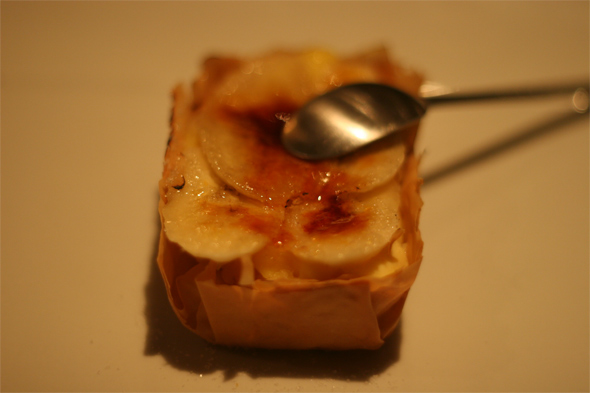 And the last course (dessert!) is always my favourite: truffle and banana creme brulee. Ellis offered up an almost pudding like centre with a flaky phyllo-esque shell. The bananas were quite nice, but I couldn't detect any truffle.

As my first underground experience, it was an interesting evening. Dining in an intimate setting with a group of strangers does not appeal to everyone. But our hosts Durant and Jessica were very gracious and once the diners were all sufficiently lubricated the conversation became livelier and people were able to let loose and enjoy the food.

Underground supper clubs have become the food lovers topic du jour, and I will continue try and get into a Charlie's event. In the meantime, I am going to keep on diggin'.