Eat Green (And Great!) At The Green Living Show

In its third year as Toronto's biggest consumer show for all things green, The Green Living Show is the destination for anything and everything under the big green sun. Of course I went there for the FOOD.

And boy, oh boy was there tasty local food.

Hosted by Slow Food Toronto and Evergreen, the concept for the food offering at this year's show was revamped and locavored to the max. Fifteen Ontario farmers teamed up with twenty-three Ontario restos/food purveyors to develop a dish for the show. They offered up a selection so far and above anything you would normally be subjected to at the Direct Energy Centre that I was in food lovin' heaven.

It was a ticket-based system (5 tickets for $10), and most food items were 1 ticket apiece. So for $10 you got a solid meal of great quality made exclusively from local ingredients.

After making the rounds a couple of times to check out what was on offer, I settled down with a small feast. I started off with a selection of three cheeses from the Ontario Cheese Society, two goat's milk cheeses from Fifth Town Artisan Cheese Co. and a smoked Havarti from Pine River. 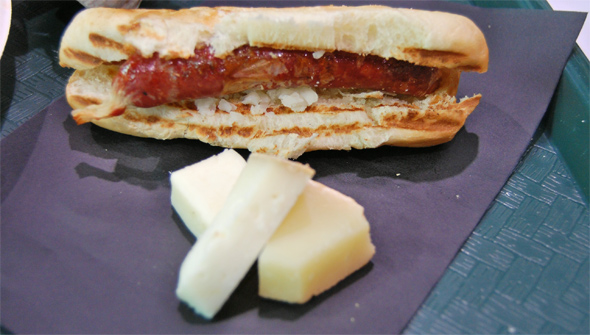 I then moved on to gourmet hot dog from Buddha Dog topped with Vicki's Veggies Green Tomato Chutney and Peeler's Cider Apple Jelly.

Next up was Green Eggs & Ham from Rowe Farms and The Rosebud/The Citizen/Le Petit Castor's Chef Rodney Bowers. Bowers explained to me that the green came from a puree of blanched ramp greens (part of which was turned into a compound butter also used in the eggs). The green Rowe eggs were then topped with Rowe ham and maple syrup. Very very tasty, but not all that rampy.

Next: more pork!!! A 10 hour slow cooked pulled pork sammy from Field Gate Organics and The Healthy Butcher that had the perfect balance of savoury and sweet, and a good bun to meat ratio.

To lighten things up a bit I had a Panko'd Tomato Goat Cheese Salad, which was essentially a deep fried goat cheese ball with tomato in the middle served with greenhouse greens and drizzled balsamic reduction. This dish was from Slegers Greens and Sovereign Farms with Palais Royale.

And to cap it all off I finished with a blueberry smoothie from Barrie Hill Farms and Jamie Kennedy's Kitchens, where Chef Kennedy himself was on hand and handing out smoothies to hungry show-goers. 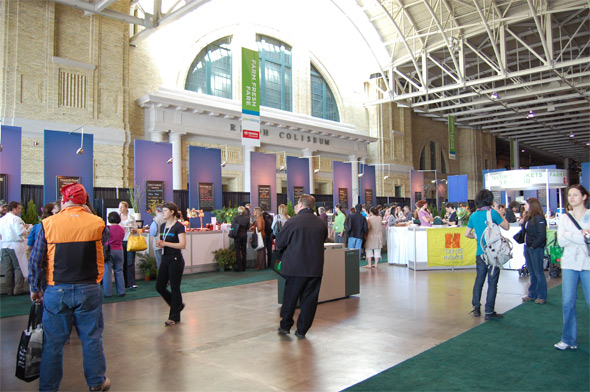 Among some of the other resto/farm teams there on Friday were Weninger Farm with the Harbord Room, Cookstown Greens & Hope Family Farms with Victor at Hotel Le Germain, and Purdy's Fisheries with Epic at the Fairmont Royal York. While the farms represented will remain the same, there will be some rotation of restaurants throughout the weekend.

One more food item I had to have before leaving the show was some forest-friendly FSC-certified Ontario maple syrup from the FSC Canada booth. Sort of like organic certification for forests (but definitely more rigorous than the organic standards in North America), FSC-certification means that forests are being sustainably managed, and all products coming from those forests are tracked and carry a label.

I was impressed by the thought, creativity and care that went into putting together the Farm Fresh Fare pavilion this year. It is absolutely great value for the money and a wise addition to the show. Eat on green lovers, eat on.

Farm Fresh Fare can be enjoyed today and tomorrow.