Taking what appears to be a menu from the reservation desk, he thumbs through the booklet, pointing out products and prices with encyclopedic proficiency. There are at least three pages, maybe four, but it becomes clear that this is no ordinary menu; in fact, it's only the wine.

"We have close to half a million dollars in wines," muses chef Massimo Capra, "We have lots of good stuff."

And as it turns out, "lots" is an understatement. The maze of bottles that sit behind the rounded, beaming chef is just the beginning, dwarfed by wine racks and cupboards that extend across entire walls, climate-controlled, and precision-stocked.

Yet despite its meticulous collection, Mistura - the name of Capra's popular Rosedale restaurant - isn't completely infallible.

"We had a shelf break, and all the wine came down," he sighs, pointing to a small, yet clearly missing partition behind the bar. "It was like an avalanche of wine; thousands of dollars lost."

While one shouldn't cry over spilt milk, Capra knows that spilt wine is no different - the fact that he has been able to stock any wine at all is a testament to his restaurant's enormous success. This is a man, after all, whose house had no running water until the age of five.

Growing up in Italy throughout the 1960s was far from a carefree existence; while the country's major cities experienced a period of rapid modernization and industrialization, not all families were so lucky.

"We were farmers' sons and daughters, and we were not moving at all," Capra explains. "There was complete poverty, and there was nothing glamorous about it. We always thought it was a curse."

In fact, it's often written that his love for cooking and culinary arts was cultivated while helping in the kitchen and gardens of his parents; and while true, he was left with little choice. Everyone was expected to do his or her share. The fact that he remained in his hometown for nearly 22 years is a feat in and of itself - Cremona, after all, was not a town you usually left.

Pausing for a moment, he turns to a whistling colleague, carrying boxes of candles for the evening's dinner; apparently there's some concern that the candles are too hot for their holders. The two converse briefly, and yet, I get the distinct sense that, despite being Mistura's executive chef, it's clear that Capra regards every aspect of the restaurant just as important as the next. Grabbing a glass, he pours some water for the two of us.

"Every restaurant I go to, the glass is never clean," he muses, studying the crystal appearance of the freshly poured liquid. "You see that? When you pour the water in, you should never see bubbles stuck to the side."

"When you buy beer, and you see that all the bubbles are stuck onto the inside, it's terrible glass. Dirty. I can't stand it when I see that."

As he places down the glass, another colleague walks past, and Capra is lost yet again to the nature of his work. This time, the animated conversation shifts to the finer points of Mistura's billing system. 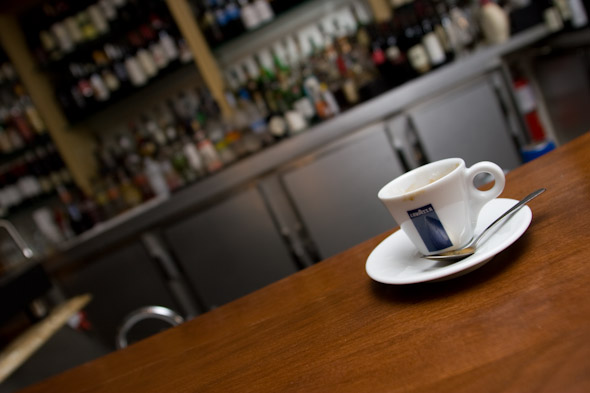 A jack-of-all-trades, it's clear that this chef chooses not to limit himself to the kitchen. While he works extensively at Mistura, and its upper lounge, Sopra, it's only in the last decade that he's earned his "celebrity chef" moniker. Dishes like smoked duck salad, and pistachio-nut crusted fish have made him a daytime staple on the likes of popular daytime television programs as CityLine and Restaurant Makeover.

"I guess when I worked at Prego Della Piazza, I made a lot of good food, and a lot of good friends," Capra explains of his previous, popular Toronto restaurant, once located but a block away from his current restaurant. "I made a lot of friends in the industry. If I had to start naming names I could write a phonebook."

Having just opened Mistura, working as the restaurant's executive chef allowed Capra the freedom to make more frequent television appearances. When CityLine called for an audition, Capra was ready.

"My menu always had something on it that was really spectacular for the media," he says with a grin. "One of the producers for CityLine saw me and said it would be nice if I came on the show. So I did an audition, and blew the other chefs out of the water."

Reaching for my drink, I'm greeted with but another example of chef Massimo Capra's growing popularity: almost two hundred pages of recipes, released in late 2007, entitled One Pot Italian Cooking. Considering the success of his first foray into paperback cooking, it's no surprise that he's currently working on a follow up.

Overall, it's a lifestyle that Capra is truly thankful for - and yet, one can't shake the feeling that home is where the heart is for the celebrated Italian chef.

"All of the things I left are all of the things I'm looking for now," Capra explains, his gaze directed back towards the endless bottles lining the wall. "My brother always tells my wife and sons that I was never a good Italian. Inside, I think I was always meant to leave."

"I had to make a decision," he continues; "The economy in Italy was bad, the living conditions were tough. We had the Red Brigade. We had terrorism. We had all sorts of problems."

And then, pausing for a moment, "I said I was going to work on an oil platform," he smiles.

Of course, the only oil Capra deals with these days is of the cooking variety. Yet he still manages to return home almost twice a year, to the country where the majority of his family and friends remain.

"I was fortunate enough that my father believed in his ideas enough that he was able to say 'go and find yourself a future, I don't care where you go'," says Capra of his youth.

"It's not how near or far, it's what you feel inside."

But these days, for chef Massimo Capra, it's not just what you feel inside that matters, but the food inside as well.