Donning a chef coat and serving up great food six nights a week is no easy task, but mild-mannered chef Rocco Agostino, owner of Silver Spoon in Roncesvalles, does it with creativity and dedication. Chef Agostino, who is celebrating 8 years with Silver Spoon, loves being in the kitchen, using Ontario's finest ingredients and watching diners in his restaurant enjoy their meals.

With strong family roots in the far south of Italy, it's hard for the chef to keep Italy out of his food, but his French technique and worldly tastes make Silver Spoon a seasonal food restaurant more than anything else. His love of Italy, though, and its pizza, led him to help a friend open the new Pizzeria Libretto, where you can find some of the finest brick oven pizzas outside Napoli.

I joined Chef Agostino recently to talk about what makes good food, where he gets his inspiration and whether he'd like to have his own tv show. 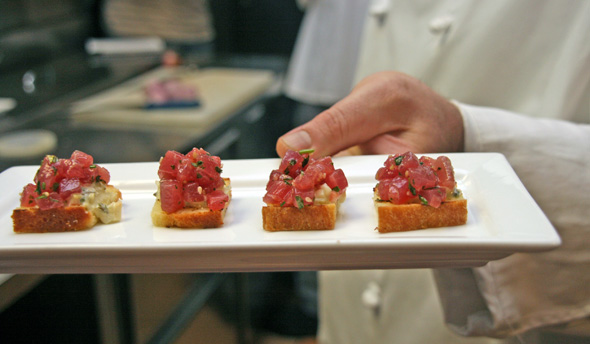 Silver Spoon didn't start out as a local and seasonal food restaurant, but the 37 year old Agostino, graduate of the Stratford Chefs School and 16 year veteran, has been focused on local, seasonal and organic for a couple years now. He sources as much produce as he can from 2 Farms, Cookstown Greens and Soiled Reputations and a lot of his meat comes from Beretta Organics, including the ribeye entree that is a mainstay on his menu. He does the smoking behind the restaurant.

As the available produce changes throughout the year, dishes change over, meaning that the chef and his team need near-constant inspiration. When asked where he finds that, Agostino simply says "the seasons." Prodded for more, a beaming chef says "smiles on peoples' faces" are what tells him he's got a good dish.

Although I could see the large open window in the kitchen, as a diner I couldn't really see the chefs too well. It was with this last comment that I looked from the kitchen side and realized that the chef has a perfect view of his patrons, and he indeed loves to look into the dining room to watch reactions to his food.

What becomes very clear as the interview gets going is that Rocco is a humble guy who just loves to cook. He is proud of his restaurant and takes the owner and leader role he has to fill, but shies from the spotlight and his face doesn't really light up until the questions come back to food. Of course, none of these questions stop him from preparing a tuna tartare for a catering gig that night.

Why local and seasonal food? 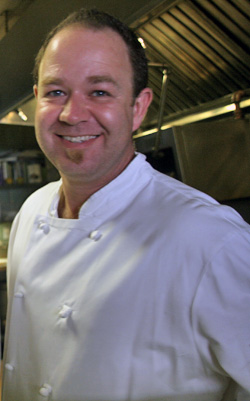 The product is superior and the flavour is absolutely incredible. It costs a bit more but it's well worth it.

What do you think of the Toronto dining scene?

It's pretty good. You've got your fine dining, lots of cultural food, you can satisfy any craving you have. Maybe Toronto tends to follow a trend instead of setting one.

What about molecular gastronomy?

What's a typical day for you?

10:30 am, get in and then go pick up anything for the restaurant. Back by 12 and get ready for service [prepare food]. Service starts at 5 pm. Kitchen help arrives about 1 pm, service staff about 4 pm.

An ideal day in Toronto would consist of?

[With my wife] take a walk, end up at a cheese shop, then go enjoy it [with bread] at High Park.

That we're here! Don't advertise or focus on the type of food, just give a place a try.

Milk, juice, beer, cold cuts. Sopressata from Mama. That has to be in the fridge.

Jerk chicken wings. They gotta be nice and juicy and plump.

You're offered your own television show. Do you take it? Do you start to build your "empire" that way?

What if it took you out of the kitchen?

No, that's not going to work. I have to be cooking. I love cooking.