Although it's not as ingrained in our civic mindset as other dishes are in other cities, the Peameal bacon sandwich is one of the more iconic foods in Toronto. At outdoor festivals there's almost always a Peameal bacon sandwich stand, and you can order it at large venues (like the Air Canada Centre) and even some of the city's cultural attractions (like the ROM's Food Studio).

But, as anyone who considers him or herself a Peameal bacon sandwich aficionado knows, the best place to get the real deal is in the St. Lawrence Market. Within its hallowed halls are three Peameal bacon sandwich vendors in hailing distance of each other, and although you might think the simple pork-on-a-bun "recipe" would be hard to vary, each vendor presents it in a slightly different way.

Enlisting the cast-iron stomach of my trusty dining companion, Horse, I set out to learn which vendor sells the best sandwich. Among other lessons, such as repeated reminders of the somewhat wonky hours of operation of the market, we learned the answer to this age-old question. What follows is a scientific analysis of that journey: The Great Canadian Peameal Bacon Sandwich Luncheon.

While the ultimate test for any Peameal bacon sandwich is its taste, we felt that in order to fairly assess each vendor we would have to include criteria that analyzed the entire experience. Thus, we noted Customer Service Criteria (speed, friendliness), Quality of Vendor Criteria (quantity and quality of serviettes, variety of condiments, cleanliness), and, finally, Physical Sandwich Criteria (number of slabs of bacon, quality of bun, presentation, and, of course, taste). In order to not over-inflate this comparison, I won't include each and every figure, but the following summary of our findings should reveal the highlights (and lowlights) of our adventure.

At each vendor we individually ordered a sandwich so as to customize it to our well-tailored tastes via condiments. We did not ask for any special treatment beyond our condiment requests, giving each vendor the opportunity to surprise us and enhance our experience. After consumption, scores were tabulated based upon our immediate impressions. In the event of wildly differing opinions, an average of both our scores was taken. 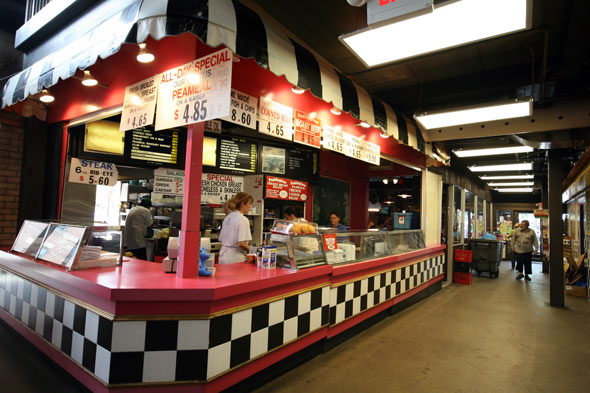 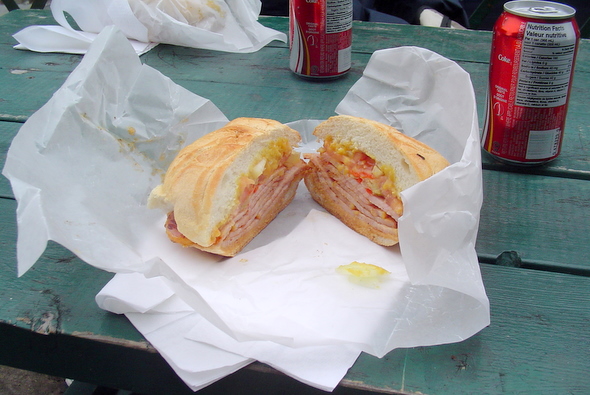 Perhaps the most visible of the three vendors, Paddington's Pump extends to Front Street and is often open when the rest of the market is not. Unfortunately, our experience was marred early by extremely inattentive service. The time between arriving at the counter and sitting down with sandwich was 9 minutes, double the next nearest competitor. In fact, we were flat-out ignored for about five minutes, and a relatively empty St. Lawrence Market meant that over-occupation was not an excuse. Though the wait compounded our hunger, it also strengthened our resolve to see the quest through.

When we did finally order, each sandwich came loaded with six slabs of bacon, a number we instantly agreed would be the minimum acceptable standard. There was also a great variety of condiments, although Horse lamented the lack of pickles. In spite of the variety, some of the condiments had a just-out-the-jar feeling that made them a little more watery than we would have liked.

On the positive side, we were each asked if we wanted our sandwiches cut in half, a must if consumption is to be a neat affair. All of the requested condiments were applied liberally, giving the sandwich a pleasant weight and broadening the gustatory spectrum. The taste was outstanding, and more than made up for the long wait.

After taking into account all these factors, we awarded Paddington's Pump a 78% (Customer Service 17.5/25, Vendor Quality 14 / 20, Sandwich Quality 24.5 / 25). Though our sandwiches were great, we were frustrated by the slow service, the absence of which would have launched Paddington's score straight into the 80s range. 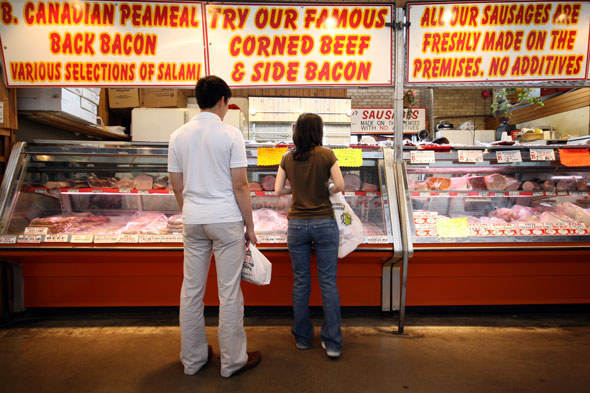 The next competitor was the Sausage King, which incidentally offers the cheapest sandwich of the three competitors. Our sandwiches were prepared in exactly two-minutes, making this both the cheapest AND the fastest Peameal bacon sandwich in the market.

Perhaps the most disappointing thing about the sandwich was the number of slabs of bacon: four. The standard (six) had been set at Paddington's Pump, and although the slabs here were slightly thicker, the lack of heft slightly impeded our enjoyment. The Kaiser bun was also flakier than we would have liked, possibly because it was not as fresh as those of the competitors. On the plus side, Horse finally got his pickle here, and the onion options consisted of both regular and caramelized, a pleasant surprise.

Despite our complaints about the number of slabs of meat and the quality of the bun, we were overall quite satisfied with our sandwich at Sausage King. After tallying up the scores, we awarded them with an 83% (Customer Service 21.5 / 25, Vendor Quality 17.5 / 20, Sandwich Quality 19 / 25). Though speedy and cheaper, the bun quality and number of slabs of bacon left us feeling like the score may have been a little high. 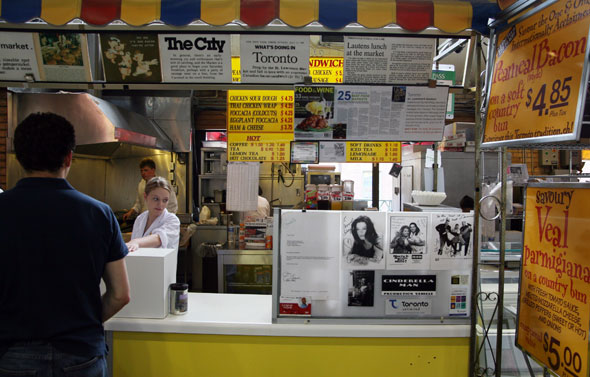 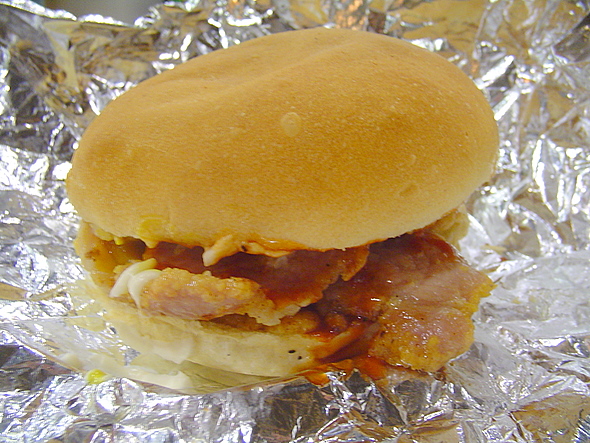 Carousel Bakery is the original Peameal bacon sandwich vendor in the St. Lawrence Market, and laminated articles singing its praises surround it like trophies. Both Horse and I considered this a climax to the adventure, and were excited to dig into our civic culinary history.

Although there is a certain charm to the straight up pork-on-a-bun that makes a Peameal bacon sandwich so delightful, Carousel Bakery did not openly offer any vegetable condiments of any kind. Several sauces were lined up on a self-serve counter, but we were put-off by the somewhat unhygienic communal spoons that were shared between different sauces and customers. On the other hand, the option of Kozlik's Canadian Mustard was a pleasant and appreciated surprise. They also offered horseradish, a potent mixture that Horse suggested was perhaps best enjoyed in moderation.

Because our sandwiches were frustratingly not cut in half, counting the slabs of bacon was nearly impossible once covered in sauces, but we estimated there were between five and six. Somewhat puzzlingly, Carousel Bakery does not serve its sandwiches on a Kaiser, but rather on a "Soft Country Bun," which, suffice it to say, is no Kaiser. Moreover, the bacon itself was not directly from a grill, but rather a non-descript container that gave the sandwich a re-heated feel.

Overall, we were let-down by our Carousel experience. We admitted it was possible the sandwich was lacking in freshness because we arrived in the later portion of the day, likely when they were preparing to shut down. After tallying the scores, we awarded Carousel a 69% (Customer Service 15.5 / 25, Vendor Quality 16.5 / 20, Sandwich Quality 16.5 / 25). 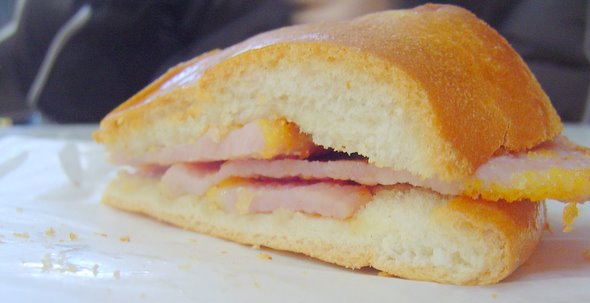 Although Sausage King enjoyed the highest score, both Horse and I agreed that Paddington's Pump deserved the top award. The Paddington's Pump sandwich was easily the superior dish, while Sausage King offered the best customer service. Carousel Bakery, while presenting a passable sandwich, lost us with their lack of freshness and inattentive service.

Of course, a Peameal bacon sandwich is built on meat, bread, and personal taste, and thus these results should be considered a guide, not an immutable judgment. The only way to be sure is to get out there and enjoy these happy additions to our civic food-scape. Suggestions of alternative vendors are enthusiastically encouraged!

All images by me, except vendor images, courtesy of Tim Shore.