Last weekend, in part two of Harbourfront Centre's four part series exploring Toronto's culinary neighbourhoods, I spent an afternoon in Chinatown and Kensington Market. Before I showed up I was curious to see how it would stack up against the Little India tour I'd gone on the week before - I was probably going to be harder to please, because while I'm in Little India a few times a year, I spend more time in Chinatown and Kensington than I should.

Our guide, Umbereen, began the tour with a short history of the the neighbourhoods, telling us about the different waves of immigration that have changed the area so much so many times in the last 60 years. We were also given some Chinese food recipes to try on our own, with dishes appropriate for both meat-eaters and vegetarians. With a bit of background knowledge on the area's cultural history and food, we dove into the crowds and began the tour. 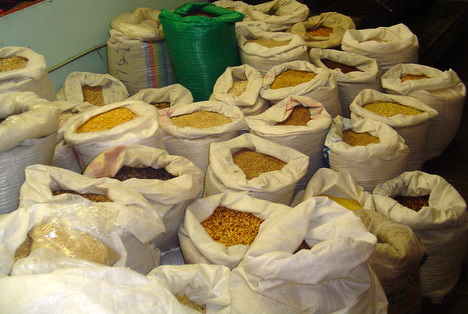 After a brief visit to the marvellous world of miscellany that is Tap Phong, we headed up into Kensington Market. Our first stop was Ethiopian Spices (160 Baldwin), where we were surrounded by exactly what you'd expect in a store by that name. It was nice to have someone take us in there, not just because it's a great place to stock up on berbere, but because it also has lots of bags of fresh injera lying around, something I'd previously only found near Dundas and Jarvis. 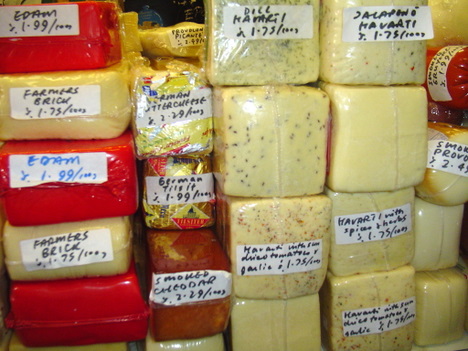 After a walk by the Kensington Community Centre, we stuck our heads into Cheese Magic (182 Baldwin). My Kensington cheese needs are almost always met by Global Cheese, but I was curious to visit the competition, and also to see if I could figure out what the fuss was about their staff.

We were given some great samples, including a Dutch Beemster that sold for 3.99 / 100 grams that I thought was the best of the bunch. It reminded me a bit of cheddar, except with a taste that changes with every bite. The all-male staff definitely was friendly and had the 'aw-shucks, we're just the cheese guys' modesty that is probably the source of the attention they seem to get. If anyone on the tour exchanged numbers with them, though, it must have happened while my eyes were rolling to the back of my head from the Beemster. 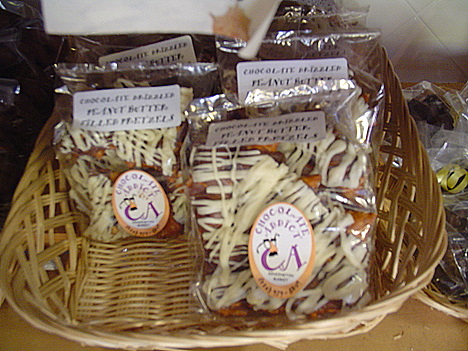 Next we headed to Chocolate Addict (185 Baldwin), one of those stores I've walked by hundreds of times but never actually entered. Having now been inside, I have a feeling it's a place I'll be going back to. Inside is everything you've ever wanted dipped in chocolate - and a few things you probably didn't: chocolate dipped fortune cookies, cashews, apricots, gummy bears, and orange peels, to name a few.

The photo above is of chocolate-drizzled-peanut-butter-stuffed pretzels, to give you an idea of the kinds of treats they have... We sampled a few of their truffles, too, with the chili one being the hands-down favourite of the group. Most of these treats go for less than three dollars, too, making the place not only a haven for chocolate addicts, but the financially conscious. 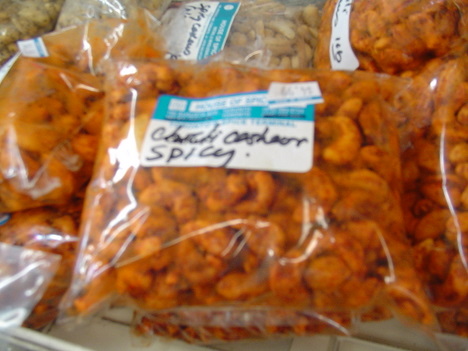 We finally ended up on Augusta in the House of Spice (190 Augusta), a store I'm pretty familiar with. In what was a nice surprise, Umbereen bought the group a bag of Spicy Chili Cashews, a treat I've eyeballed many a time but never actually purchased. (The above blurry picture is of said cashews, and the blur is likely caused by the waves of heat emanating from the sealed bag). The fact that I single-handedly ate about 80% of the bag myself told me I'd be heading back for more.

After the House of Spice, the Kensington part of the tour was finished, so we headed to the Bright Pearl Restaurant (346 - 348 Spadina Ave) for Dim Sum, vegetables, noodles, and rice. I was more familiar with the building's ghost stories than its food, but I'd been told it was considered a bit of a tourist trap by Dim Sum connoisseurs, but I was curious to find out on my own. 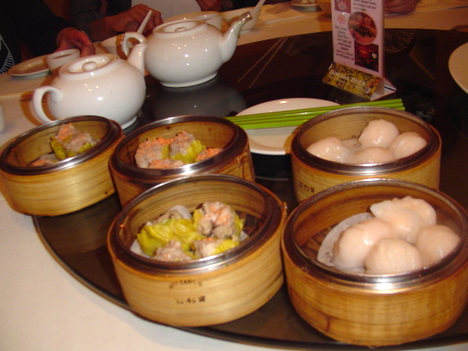 The restaurant was in many ways as advertized: insanely busy, perhaps too much so for the wait staff, who brought the wrong food to the table once, and undercooked dumplings a little later. Not having visited some of the more recommended Dim Sum places in the city, I'm not sure how it stacks up, but I found the noodle and rice dishes more tasty than the dumplings that preceded the main course of the meal.

When we finished our meal, we headed over to Dundas and Huron, to conclude our tour in Ten Ren's Tea Shop (454 Dundas West). My favourite was an Apple White tea, but there were about as many kinds of tea here as there were spices in the House of Spice, so it's the kind of place you have to spend a few hours in if you want to try 'em all.

I definitely enjoyed the tour, and I think it would have been perfect for newbies to the two neighbourhoods. The only letdown was some of the food in the Bright Pearl, but that was almost to be expected given the chaotic pace of the place.

Tomorrow the series continues in Greektown on the Danforth...

All photos by me, except very top, by thatgirlsylvia from the blogTO Flickr pool.