UPDATE (July 2009): Red Indian Art Deco has closed shop in Toronto, and has relocated to Sauble Beach and changed their name.

Someone invented a time machine in 1965. It worked for a while, but it broke down at some point and got stuck on Queen Street West. In 1982, it took the name Red Indian. It's the kind of place that's made of memories. Of course, they're someone else's memories, but you feel like they should be yours, if only you could remember. And if you recognize anything from period movies or T.V., you won't be far off the mark. A lot of the stuff in here has been rented over and over again by production companies.

The first question I asked the super talkative owner was where he got the name. It's a weird chunk of Canadian history. The McColl-Frontenac Oil Company was bought out in the 1960's and absorbed, but it once had gas stations across the country, called "Red Indian". The name was a bit of a problem for a while. When he was renting things to City TV, some of the employees objected to the name.

For a guy who talks endlessly about having to retire, he's pretty damned spry. I haven't met such a chippy store owner in a long time. And he doesn't just sell things. He has an encyclopaedic background in mid-20th century history. When it opened in 1982, the store used to be more of an art deco furniture gallery, but he didn't sell much of anything. In the early 90's, Queen Street went bust, and when the recession was over in the late 90's, no-one was left but him. He had another job that kept his store open. "But the public is spending now, so things are O.K.", he says. 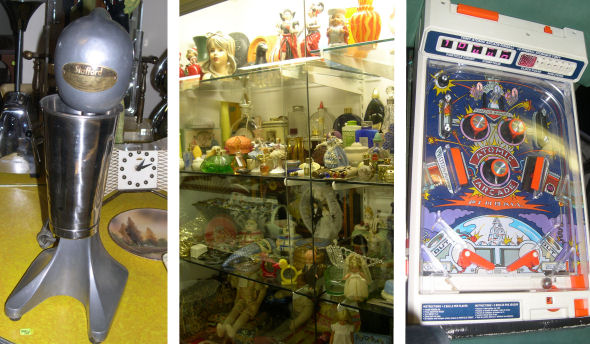 His store slowly became a repository for all things cool and funky and mostly forgotten, like milkshake blenders and figurines. As the years go, he keeps expanding his collecting forwards.

Now, he's just starting to collect things from the 1980's, like pinball machines and pac-man games. I actually remember those things from my childhood, which worries me. He says that at some point he's moving to the countryside, where all antique shops go to live out their retirement.

20th century collectibles is the name of the game in here. By "collectibles", I mean, well, anything that you can actually collect. And it's not just old junk, or not all just old junk. There are old steel fans out of detective movies and every possible kind of telephone. There's an entire cabinet filled with various once-common household goods. It's all a little past the expiry date, but maybe a Vogue Nylon Hair Net might be useful for someone.

There are endless numbers of every kind of old lamp there could possibly ever be under one roof. And some clocks. I'd say they're retro, except that they're not reproductions, they're the real deal. If it exists, this man has one to sell you. It's probably possible to accurately re-create the interior of a house from each decade from 1930 to 1970 with stuff from this shop. Mid 20th-century means there's so much chrome in the store, for example, it's like someone hijacked 1952 and put it on display. 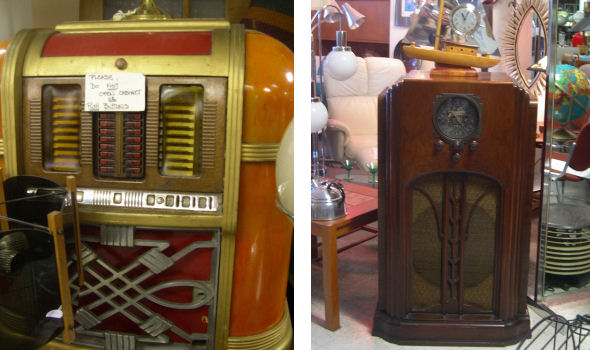 There's one jukebox, from 1939. It was the first year they used plastic. It's mostly used as a film prop, but he claims it does actually work. There are microphones from the 1930's, which actually still work (you might need an adaptor, or two, ... one to bring it up to the 60's, then one to bring it up to about 1990, which should be fine). The globes are like little time capsules with no-longer-extant countries on them. There's an old Zenith radio cabinet. I wonder if it gets shortwave?

All the trendy 20-30 somethings are buying teak from the 60's. He can't keep it in stock. It looks modern enough, but with just a touch of historical panache. The day I was there, a desk went for $295.

Nothing makes a kitchen more interesting that your grandmother's kitchenware. Bakelite and plastic hold up remarkably well. I think the Odd Couple used something like this 1950's dinner set. 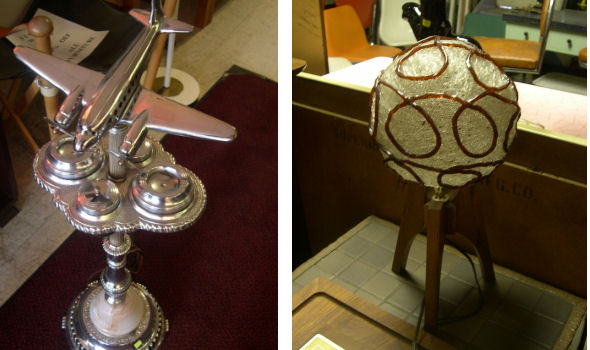 There used to be a factory in Toronto that made silver things, back when western countries still had factories. Incidentally, the factory was responsible for a lot of the pollution in the Don river. One thing they made is a silver Airplane ashtray, recently bought by a pilot. The base lights up, making it bona-fide kitsch. What's amazing is that he's sold about 150 in his life, some of them more than once, in fact. He sometimes gets them back, when customers get old or the wife says, "it's me or this stuff". And the lamps, well, some of them might have been comfortably left back in 1968.

If you plan to stop in, just be sure to bring along some nostalgia medication. This place is pretty overwhelming.