Koma seems like the sort of place from a 1970's sci-fi movie, as if a funky device was invented to holographically project dreams. It sounds innocent enough, but then someone went and connected it up to Terry Gilliam after he got home from a particularly good party. It's Industrial Modern with a dose of Vintage and a lot of something else. I call it "Industrial Theme Park".

Being in this store is exactly like being in someone else's head. Koma's owner, a dreadlock-sporting super-friendly guy named Jamie, has been collecting things for years. When both of his apartments were filled from floor to ceiling, opening a store was the only option left. He started in movie work and now rents props for production, but he also stages homes for sale. One lamp was in the Hulk, for example, and his surgical lights graced more than a few feature films. The orbiting surgical lights are definitely Monty Python-esque.

I felt a slightly religious sensation. The smurf Buddha near the entrance sets the tone, and the incense multiplies the ethereal sensation. The artefacts in Koma are displayed almost reverentially. It's a storage space for relics belonging to a religion from an alternate time line. For example, I just don't know what to say about the alien in the baby carriage. It's immensely, ... immensely. It must have something to do with the mushrooms by the door. Maybe they're special mushrooms.

Jamie isn't into designer stuff. He likes things to be tough, durable, and, oh yeah, juxtaposed. That word glides into this store effortlessly and makes itself at home. Jamie likes to juxtapose everything. "If you've got a room filled with Moroccan stuff, it looks nice, but it's kind-of boring. I want things to pop out at you." He says, "I love thick pieces of glass, heavy plastic, coarse fabric, hand-smoothed wood, metal, anything that's not finely finished."

He also loves to give old things a new lease on life, and he makes and modifies furniture. In the basement, he has a table built with working bicycle wheels. There's an ultra-low sofa made from a recycled 1970's frame and a warehouse trolley that might be useful in a kitchen. "People who come here are usually 25-45 years old. The over-40 set are mostly still into baskets and Pier One Imports stuff." That said, he says his functional pieces go quickly.

All the glistening steel is nicely offset by some 70's wood-brown tones, comfortable spongy pillows, organic lighting, and a sultan's tent. 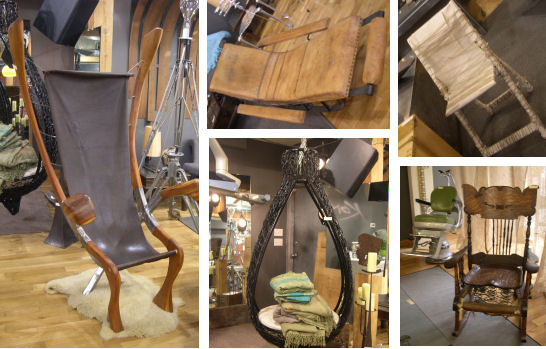 There's a good range of "Concept Seating". The Viking Throne isn't exactly comfortable, but even when it's empty, it looms. It was probably the favourite chair of the Spider King from the planet Art Deco. There's a grungy recliner, a sort-of mummy chair, and a cage-like hanging chair that seems innocent enough... at first. The old green dentist's chair is too medical for me, but a rocking chair with a spring-loaded bouncing seat definitely starts conversations.

The stainless steel "Bone Chair" isn't comfy either but I don't think a bone-chair is supposed to be. I loved the silver barstool. I was almost afraid to use it, it was polished so mirror-clean. The resin-stone reclining chair might have come from Fred Flintstone's psychiatrist's office.

This is not your mom's kitchen, for sure. But the stove apparently works. There's some very unique art hanging over a huge gun-box and the most interesting drafting table I've ever seen, made by Jamie himself. I'm not sure what the bowls are for, though they look vaguely weapon-like, and the recreation Greek helmets hand-made in India are definitely an interesting decor touch.

Some of the lighting really does seem dream-like, the most inspiring stuff in the shop: lamps that look like table lamps but float in the air, funky shiny silver bubbles or glowing blue glass on welded copper pipes. There's an archive of glass lampshades in the basement, all neatly filed and waiting for someone to take them home.

There are lots of room-sprucer-uppers, like glass vases and Dracula's wine goblets, and you can display them on an industrial-strength elevating party table. The magnifier is oddly riveting.

Koma does all of these things at the same time.