The word Haveli refers to mansions in northern India, with courtyards and lost of fancy frescoes and ornate stonework. They're for rich and powerful Indian people.

But step into Haveli Home and WOW! you can live like a Majarajah, too.

Indian furniture has acquired a bit of a sour reputation because unscrupulous importers bring in the lowest quality, cheapest furniture they can find. Before I walked in to Haveli Home, I was expecting another blase import house, with nondescript, badly made Indian furniture.

Holy Cow, was I wrong this time.

This store is part shop, part museum of Indian collectibles. Here's a warning for you, though: people either love this stuff or hate it. And customers drive in from out of town to shop here, because the people who love this sort of thing really love it. A lot of the pieces feel like ancient relics, snippets and bits of ancient cultures air-dropped into Canada.

The furniture almost speaks Hindi. I could hear some of it whispering to me.

Some of this furniture can't be found elsewhere. Take these massive, old doors from India. Builders take apart old houses brick by brick and either chuck the remains or re-use it. Usually, old things like doors get thrown outside and left for dead. The owner of Haveli Home rescues them. They run from $2000 to $6000 apiece, depending on how old and rare they are.

The doors look like they're from different countries, and in a way, they sort-of are. The ones with Islamic symbols on them, all straight lines and geometrical figures, are from Punjab. Some have more Hindu styles, others a mix of colonial British and Hindu work. And they're not actually all that old. Most of them date from the 1930-40's, though they look like they're much, much older. Old and rickety they're not, it must be said. They're solid, sumptuous works of art. 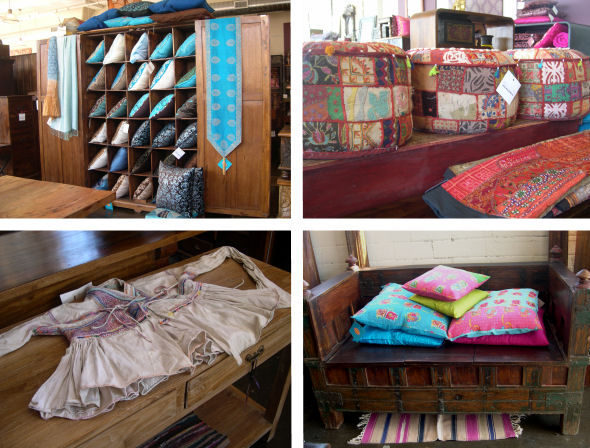 India is not a country, the owner of this shop says. It's like a separate world. Actually, like dozens of separate worlds. It's an extremely regional state. India is so regional, different parts of the country use cloth with different thread counts and you can identify the micro-region where everything originates.

And it shows in his store. Take his textiles. He has lots of textiles here for the discerning enthusiast. It's not the run-of-the-mill stuff. The fabrics are lush and extremely colourful. It's all extra fine and it all has stories. His connections mean that the textiles in his shop are made fresh for him in India. What's amazing is that they're not particularly expensive.

Of course, there's a story to that. 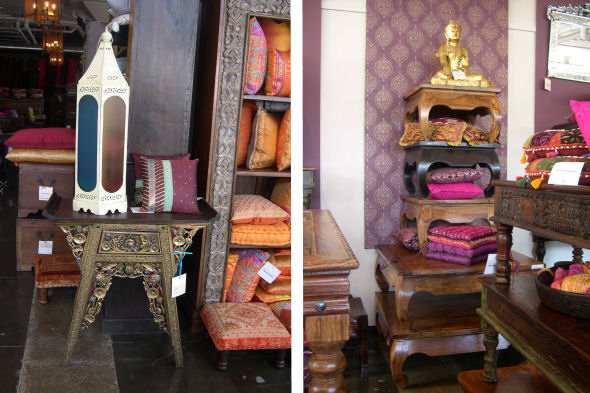 I arrive at this store through a few twists of fate, and it's a story I just have to relate. I hope I've got the details right.

You see, the owner, David Anderson, went on a European trek at the age of 17, an age ago. He started in Spain. While in a pudding shop in Istanbul in winter, he meets a Pakistani guy from South Africa who was on a break from school in Sweden. The Pakistani guy says, hey, I'm driving to Lahore in twenty minutes, I need help driving, there's lots of snow in the mountains, anyone want to come with, now there's a good chap, off we go. It was 1970-something, so naturally Mr. Anderson said sure. It was a scary snow-filled drive over the mountains, but he lived to tell the tale (repeatedly, and at some length, I might add).

And then he spent the better part of 10-15 years in and out of India because he just fell in love with the place. He's kind of like a reverse Gypsy, going from the Atlantic to the Indian Ocean.

He worked for his brother in Afghanistan, importing textiles, and he loved textiles so much he even donated his private collection to the Textile Museum of Canada with stuff he collected in Central Asia. He's still on the acquisitions committee.

Anderson acquired a species of Indian sensibility after spending so much time in The Subcontinent. He hand-picks everything he imports, and he's mighty picky. It's all very slightly off the beaten path. He genuinely loves his goods, too. He doesn't seem to want to let some of it go. And man, can he tell a story about practically anything in here. 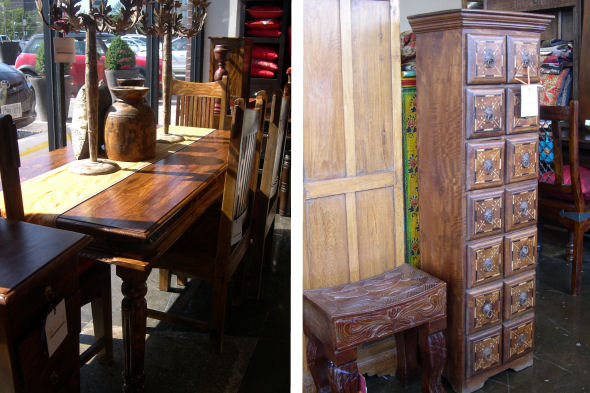 Needless to say, he buys things directly from the people that make them, so his prices cut out the middlemen pretty effectively. Tables, for example, go for between $200 for a side table to $2500 for a huge, massive dining table. It gets more expensive, depending on your tastes.

It's solid wood furniture, not over-priced, and though it doesn't go with everything, a piece or two on display makes any room a little bit more interesting, and if you're feeling like you want to go down that route, you can always outfit your home in grand Indian style, too.

The richness of the wood and the fine details in the painted pieces make it worth a visit, for sure, just to see what higher-quality Indian furniture actually looks like. One note of warning: it's all solid wood. Solid tropical wood. This means most of it is heavy enough to need a large Indian family to lift it. You won't be taking anything substantial home in, say, your little Toyota hatchback, unless you want to get the wheels realigned. 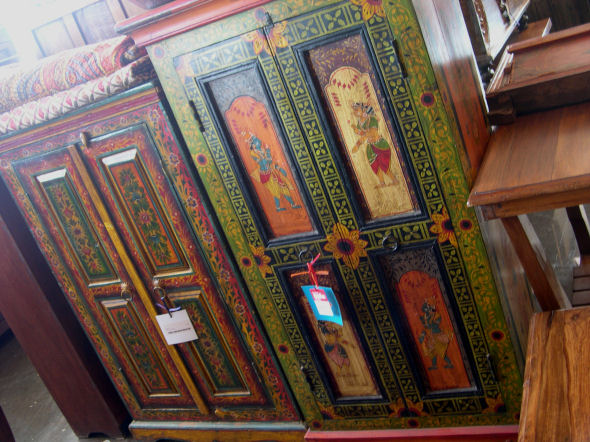 I was worried about tropical trees being cut down because I wanted to buy some Indian furniture. Not to worry, he told me. Not a lot of fresh wood is cut. The principal reason it that this costs a lot more. New trees are worth so much, there's a saying - "Sell a tree - marry your daughter". I assume this means the tree supplies her dowry, or something to that effect.

A lot of the furniture he sells is antique, or is re-made from antiques, like old house parts. The always popular teak is recycled. The mango-wood is from fruit trees and plantations. Shisham comes from small farms. Apparently, it's all good.

I liked the mix of painted furniture with all that wood. I know it seems like a tragedy to paint beautiful wood, with its natural rich woodiness, but this is bona-fide Culture here, and Culture that percolates through serious Tradition, so I think it's not just acceptable, it's downright Fine By Me. It's also pretty and has tons of character.

Some of the older pieces are so amazing I was afraid to touch them. There was one painted cabinet, for example, which was going for $1400. It was some pretty fine work, and it looked like someone had gone crazy with a paint set. It's actually originally from northern India, made by people who live in adobe houses. The cabinet was what they used to keep linen. This thing might just be a recycled linen cabinet, with incidentally a few secret storage compartments to hide valuables, but this simple piece it had so much personality it might take over a room. In a good way, I'm sure. 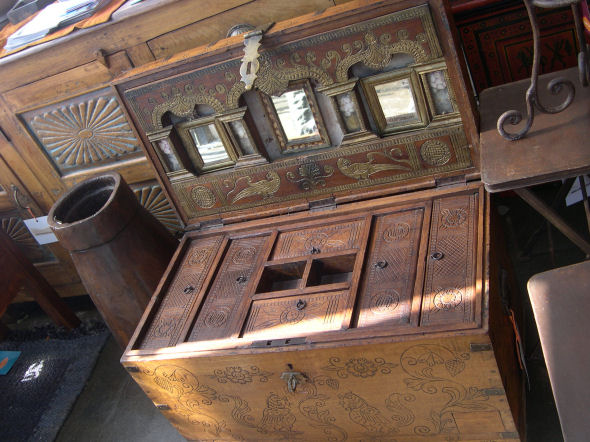 Some of his items are plain, some are functional, some are interesting and some really beg to be taken home.

Here's an example. This was a crate made somewhere around 1940. In an Indian store, the owner would sit and guard the money, while his employees ran around selling things. But this wasn't crass greed or laziness on the Indian store owner's part. Guarding the money was a serious job. The biggest currency denomination was 100 Rupees, which was about $7. People had to pay for things with huge amounts of paper, and God help you if you had to count out coins. On the plus side, I guess if you wanted to steal a good amount of cash, you needed a knapsack, or preferably a couple of them, to get any amount worth the risk.

So the money-crate had dozens of compartments. You practically needed a math degree to make any sense of it. In any case, it made for great chests filled with drawers, secret drawers, and ultra-mega-super-secret drawers. I mean, who wouldn't want to have this? Imagine this as a coffee table. I'd go for it. 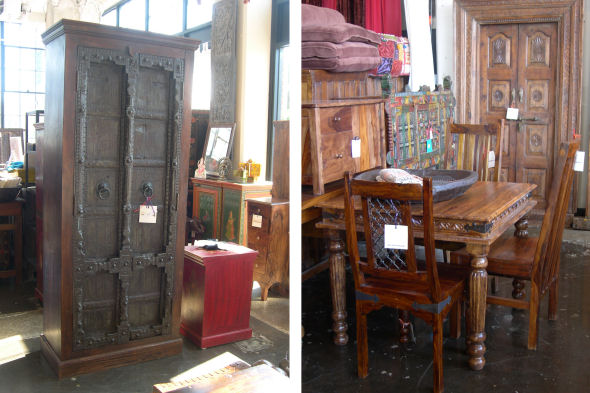 There are lots and lots and lots of bigger pieces for people who want to bite down on something substantial. The cabinets are all pretty impressive, and are at least very solid, if sometimes a bit heavy-looking. This particular one was made using old doors, installed into a newly built frame. The overall effect is damned cool. It may not be the rarest of precious antiques, but there's precious little else on the import market exactly like this, and if there is, it's more expensive elsewhere than it is here.

The tables and chairs have similar stories, partly recycled, partly reclaimed, partly new, with hammered metal hinges and hand-cut bolts. It all seems like it should be in a period movie. 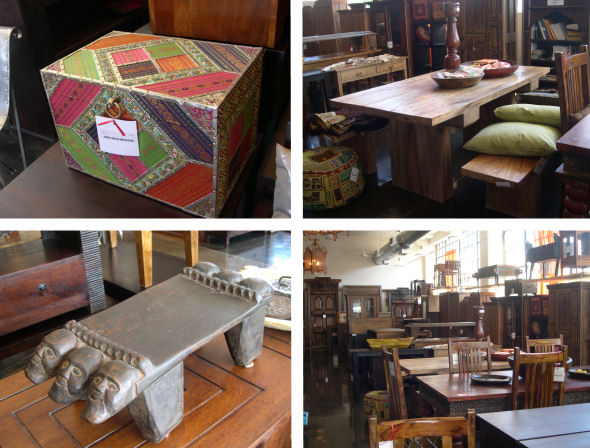 There are lots of little boxes, too, that make great accent pieces. Some of them could even be pretty cool coffee tables, or just things to have around.

The pieces on display here are just uncommon enough that the store supplied set props for Mike Myer's recent movie "The Love Guru".

Liberty Village , Anderson says, is a much better place to be than other developing historic areas. It's a living place, filled with people who actually live there, and it's not isolated or cut off from the city. It has many boutiques and artists and stores you can't find anywhere else. There's no living component in an isolated, half-derelict area like the Distillery District , which is more of a dead zone, a place to go for a few weekends in the summer when the weather is good. Liberty village, says Anderson, has a future.

You just have to tolerate the fact that every square centimetre of it is a permanent construction site. Even the parking lot beside his shop is morphing into a condo at some point.

Finding this little warehouse is an effort. It can be hard to locate. Remember: it's around the west side of the building, the west side. Be warned. Don't blame me if you wander aimlessly, harassing locals for directions. 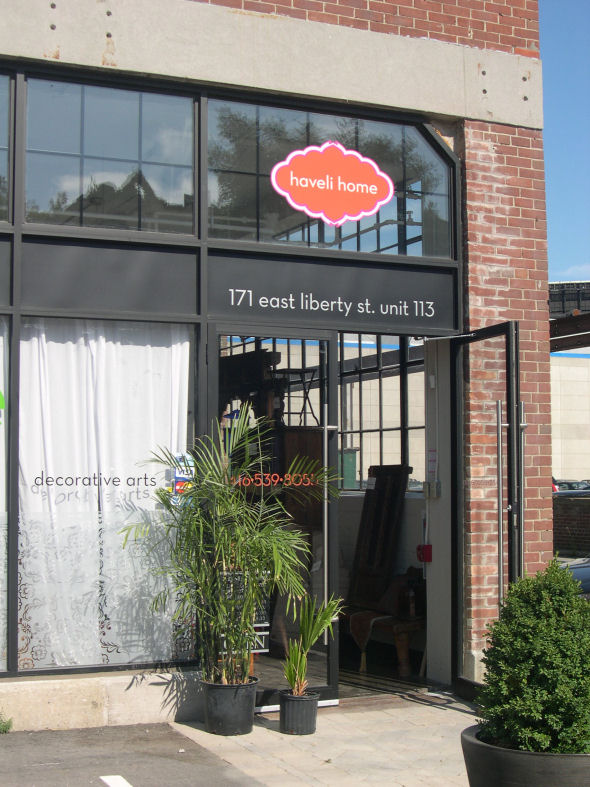