Hacher & Krain is currently open but their offerings and services may be affected due to the pandemic. Please contact the business directly for more information about any changes. Is this your business? Please contact us if you would like to update this message.

Hacher & Krain is a fine knife shop that pledges allegiance to a variety of forging regions. While there are some stores in Toronto, such as Tosho Knife Arts in Mirvish Village, that remain mostly loyal to a particular nation when it comes to the knives it sells, Hacher & Krain is decidedly all over the map.

"I don't believe in the priesthood; that one country has all the answers," Greg, owner of the new Dupont and Spadina store says. "It should be a collection of different culinary tools. 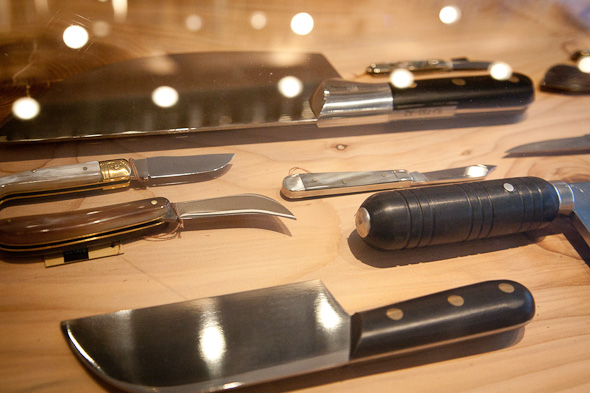 Greg removes a German knife and a French knife from one of his displays, and walks me through the subtle differences in weight, design, and function. "This one," he says of the French knife, "is a little more elegant; the German knife is a little heartier, for sauerkraut, sausages, and other German foods."

"And this Japanese knife — we'd call it a cleaver — but to the Japanese, it's for chopping vegetables." 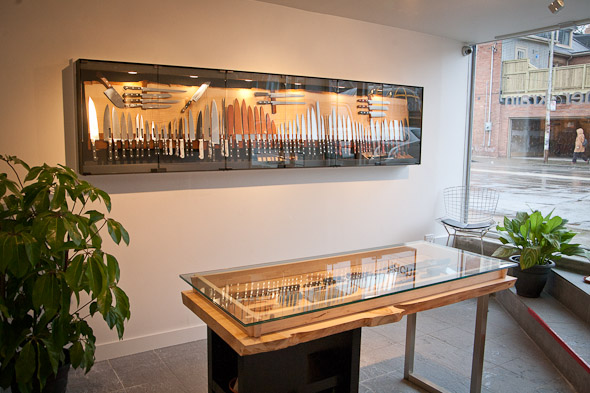 The aforementioned three countries are where Hacher & Krain finds most of its knives, though it also has odd other selections such as whittling blades from Italy and fish cleavers from Spain. Greg says his collection encompasses knives for the kitchen, table, and the pocket, ranging in price from about $25 to $1500. 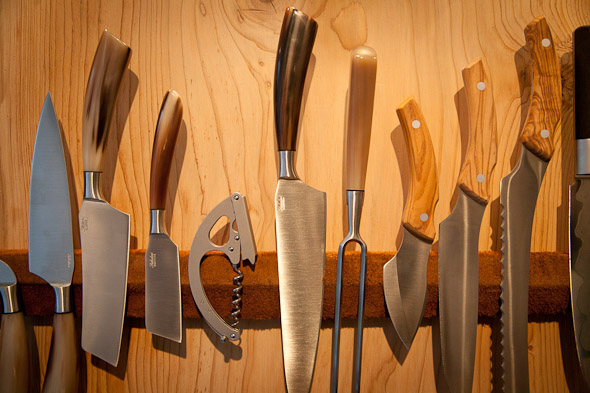 A premium French Sabatier knife, however, one that includes a leather scabbard, will ring in at Hacher & Krain at only around $120. "And it will beat the pants off of any Henckel," Greg says. 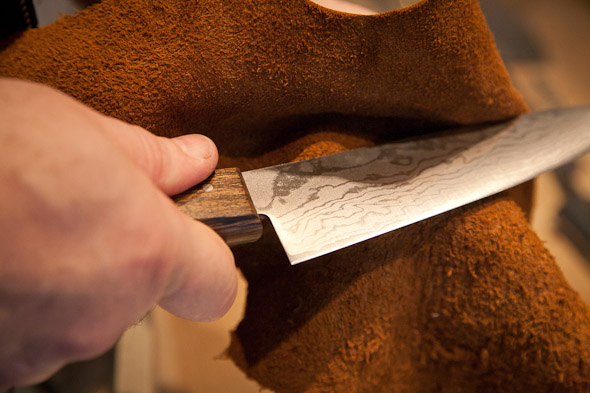 The small shop offers more than 200 different knives, each meticulously sourced for style, quality, and craftsmanship. Greg laid the foundation — quite literally — for his new store by building off years in the international manufacturing industry. He and his son came across this little space on Dupont and found it pretty well suited their needs. Greg constructed 12-gauge steel cabinets from which to display his knives, which are mounted by magnets covered in a thin layer of bison hide. 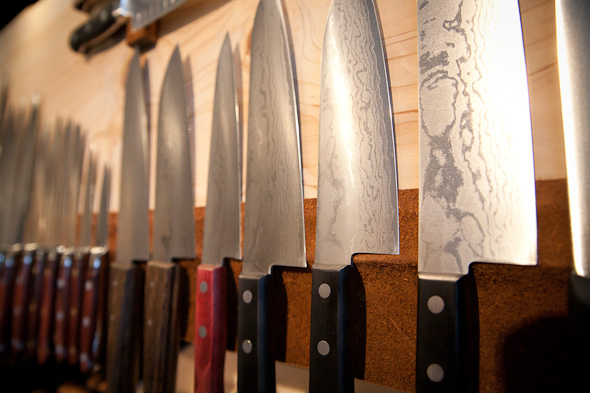 And contrary to what I assumed, there is no Hacher nor Krain sharpening knives in the back. (On that note, Hacher & Krain will teach you how to sharpen your knives, but generally doesn't offer sharpening services.) The "Hacher," Greg says, comes from the French word to cut, and "Krain" is a composite from family last names. That's as far as I get with personal history, though; Greg says he wants the attention directed to the knives, not him. 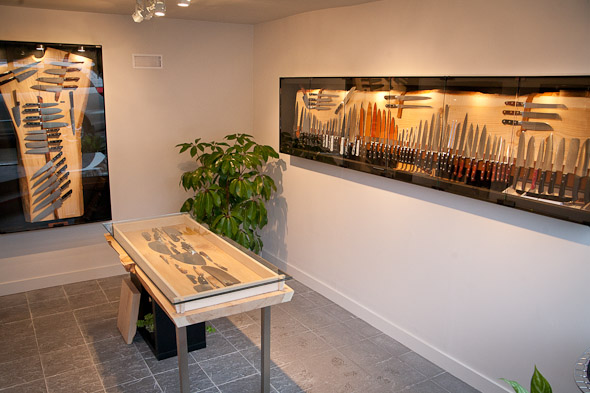 The ones that have garnered mine are the pocket knives in the central display, many of which boast intricate design and a bit of artistic flair. "You know," says Greg, "some women have worn them as jewellery; put them on necklaces, and worn them around their necks." I'm wondering to what inner-city region he's referring, but I let him continue. "This one," he says gesturing over a knife "has mother of pearl. And this one is folded steel, and this one is horn." And while Greg has told me he's been discovered by some of the city's top chefs, I'm waiting to hear about the influx of fashionistas. But, alas, it's just chefs and appreciators of fine knives — for now. 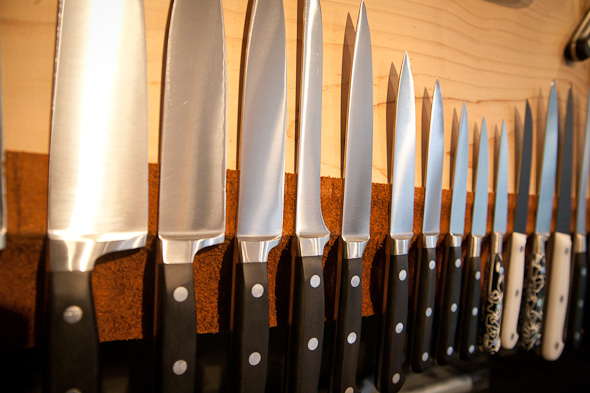 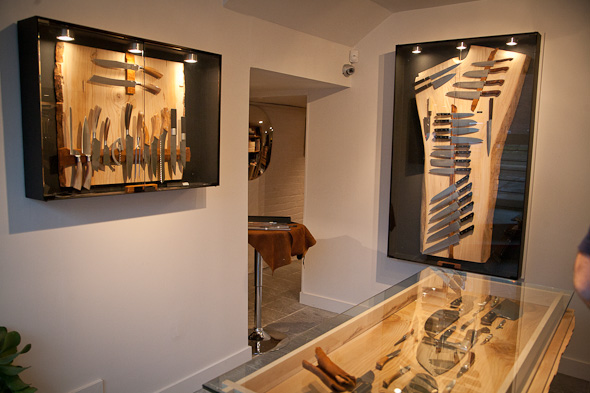 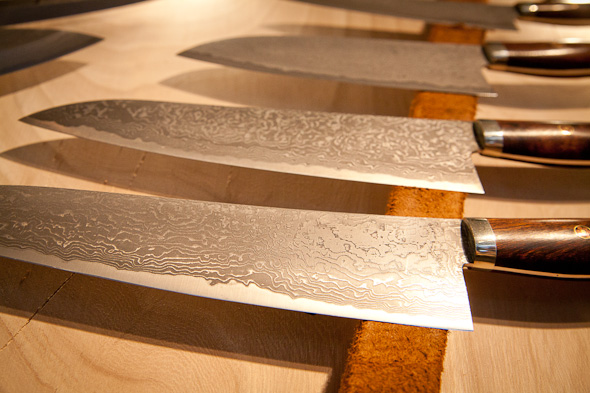 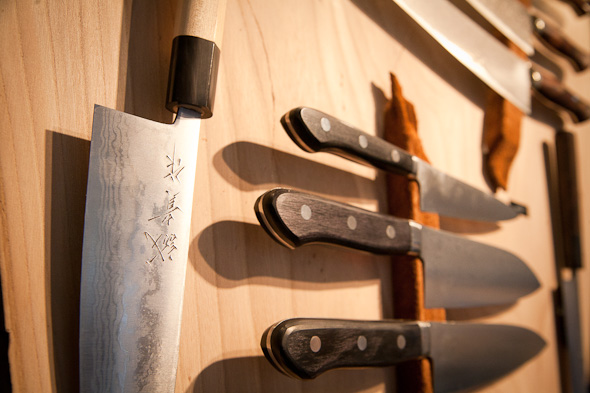 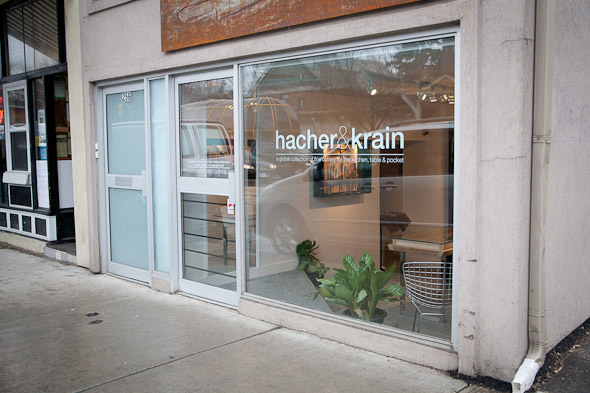