Opened in the Distillery District in March of 2003, The Case Goods Warehouse is one of six Artscape projects around the city, the newest of which is the Wychwood Green Arts Barns at St. Clair and Christie. A not-for-profit organization, Artscape revitalizes historic buildings through both physical restoration and by ensuring that they're inhabited by artists and creative types, rather than merely the highest bidder. The thinking behind this is that each building will become something of a cultural node, attracting the community at large by inviting the public inside to interact with the creativity within. Although the degree to which this is true varies from building to building, with the Case Goods space this is certainly the guiding principle. 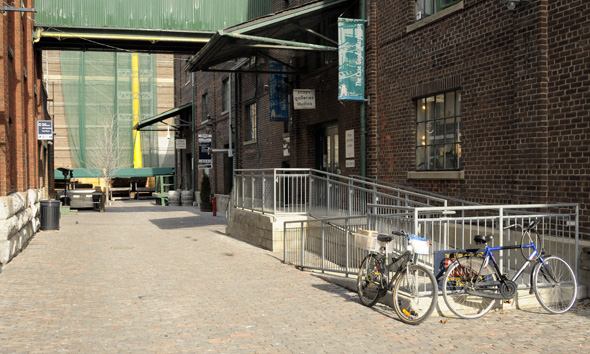 Being the uber-organized type that I am ( read as dripping with sarcasm ), before I went to check the Warehouse out, I decided that it'd be great to have something of a guide. A little bit of Googling later, and I was in contact with David Brown , an encaustic painter whose studio is on the third floor. An engaging and friendly person, David runs Case Goods' annual open house, during which the public is invited to explore beyond the retail-based studio spaces on the first floor (which are always open). He also proved to be a great source of information regarding life in the upper studios of The Case Goods Warehouse. 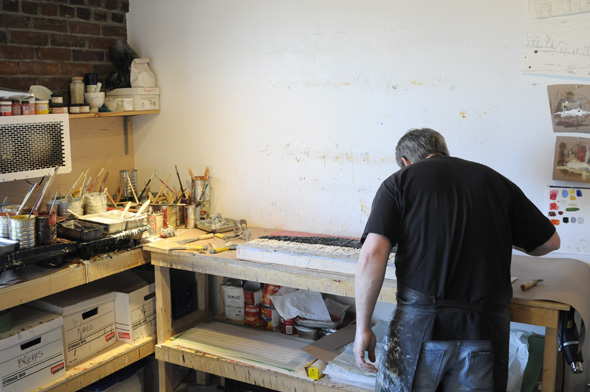 It was intriguing to hear about the sense of community on the upper floors, and without it seeming like he was exaggerating, David conveyed the strong sense that this was a pretty desirable place to work. We tried to drop in on some of the other artist's studios, but being late in the day, most had packed up shop. Having said that, even without David I was treated unusually nicely while taking photos throughout the building. Most of the time, I feel like I'm considered a potential terrorist threat. 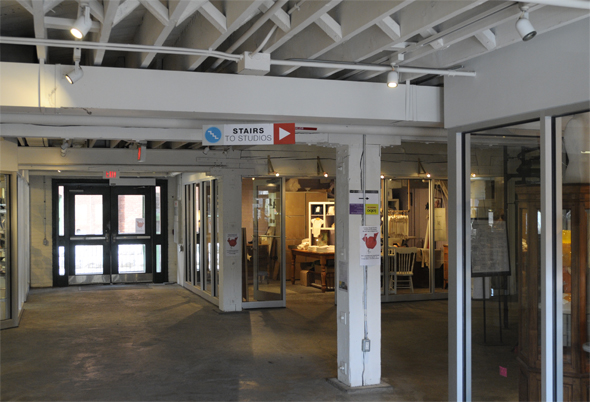 Undeterred by the primarily closed doors upstairs, David brought me down to the main floor and introduced me to some of the people working in the retail studios. Artscape requires that these studios keep regular hours (Wed-Sun, 12-5pm) so as to invite a steady flow of pedestrian traffic. Like the upper floors, there wasn't much action, but the upside to this was that I was able to speak with a number of the artists and artisans working in this area. 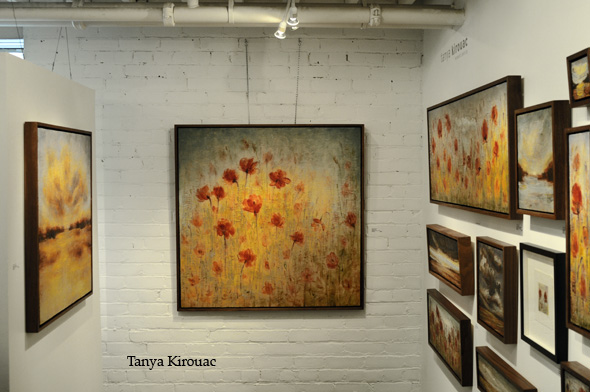 The first of the conversations I had was with Tanya Kirouac , who's also an encaustic painter. She was quite forthcoming about her experience working at Case Goods. Having moved into her studio/gallery space last year, her sentiments were almost all positive. She did, however, note that the winter was quiet (a point made by others as well), and that roughly half her sales are tourist-driven. That's not really a bad thing, but I think it might be indicative of the fact that Artscape hasn't completely succeeded in its goal to draw the wider urban community into Case Goods. It was also somewhat humorous to see that she was in the midst of reorganizing her workspace to accommodate the servicing of one of the almost century-old gaskets underneath her studio. Ah, the pleasures of historical buildings! Still, it was clear that from Tanya's viewpoint, the positives of working and selling out of Case Goods certainly outweighed the negatives. 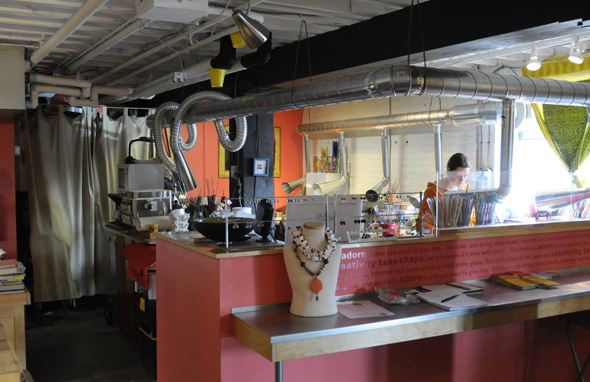 I also had a chance to speak with Amy Johnson and Jill Cribbin at Tank Jewelry , who specialize in glass bead jewelry made through a process known as flameworking. Being one of the few places in the city that specializes in such items, Tank uses its hybrid work and retail space to conduct advanced tutorials on flameworking, operating at times as something of a hub for those fluent in this rare craft. 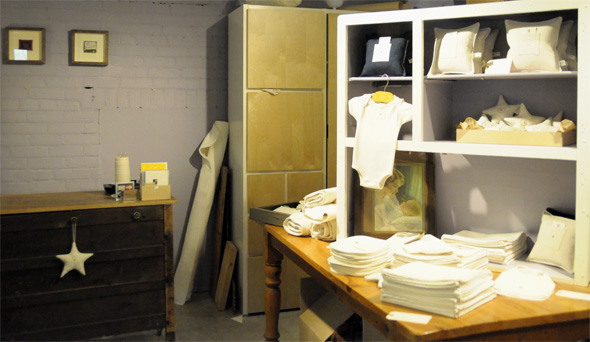 Moving across the hall, I then poked my head into Emily Hamill's studio/store, which offers homeware and infant clothing adorned with hand embroidery. As she was busy at work, we only spoke briefly. She did, however, reveal that she thoroughly enjoys being located on the ground floor at Case Goods because it naturally combats the isolation and potential loneliness that can result from working in a private studio, a feeling shared by all I spoke with. 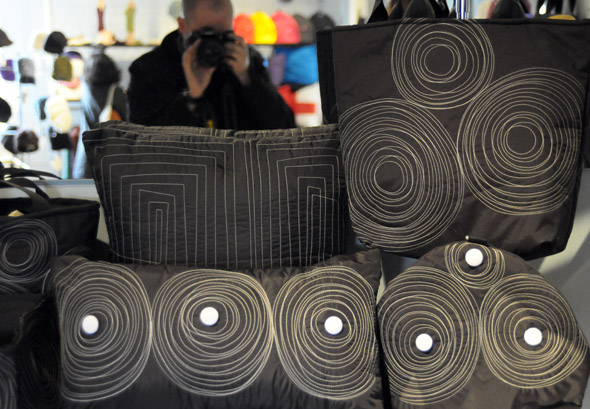 To be thorough, I decided to speak with a couple more tenants. And I'm glad that I did. In speaking with Nancea Whitham at Tenacious studio, I was once again reassured that working around other creative types is a lifesaver. We then talked a little about photography and out of this came something of a challenge to capture a good image of some of her handbags. Having assured her that I'm a good photographer, I then proceeded to take about five photos of her creations, all of which left something to be desired. I guess I can take consolation in the fact that the setting sun and numerous light sources made properly exposing nearly impossible, but I now find my confident tone quite horrifying. 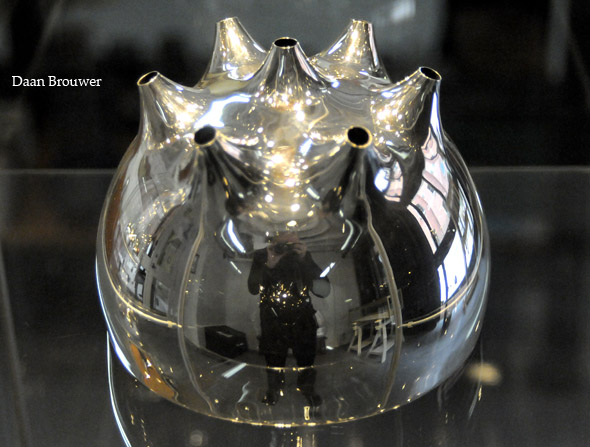 At Nancea's suggestion, I made my last visit to the newest resident of the Warehouse, a silversmith named Daan Brouwer . His work is fantastic. Looking at the objects that he's crafted, it's impossible to say if they're first and foremost fine art sculptures or if instead they're just beautiful everyday household objects, like candleholders or vases. Although he was tight for time with work, what was meant to be a quick Q and A turned into an engaging discussion on the nature of art and the role of reproduction, the difficulty of photographing silver, and what it takes to become a master at a given craft.

It was at this point that I started to buy the hype about the community dynamic at Case Goods. I've always liked to do my creative stuff in isolation, preferring privacy over the possibility of distraction. But in talking to the various tenants, I was genuinely stimulated. I like that feeling. 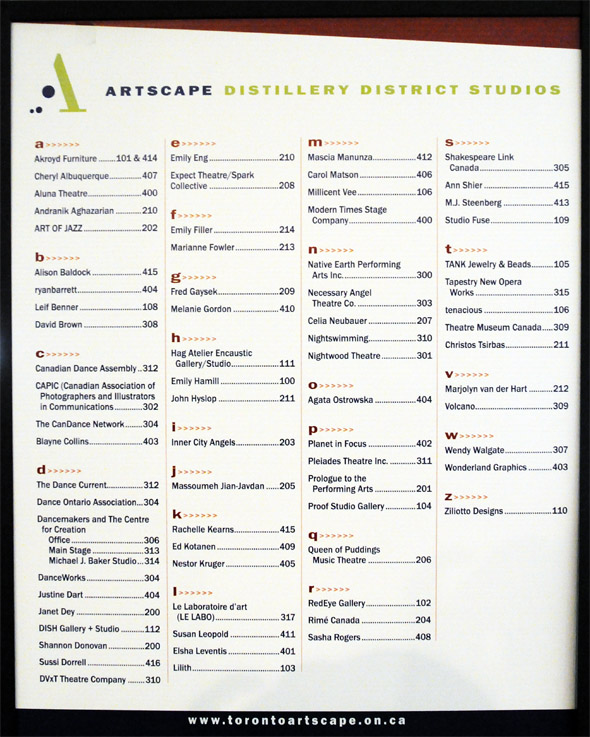