Celebrating the holiday season is a little different for condo and apartment dwellers, who are limited to balconies and unit doors to express their holiday cheer to neighbours.

But did you know that, despite the prevalence of wreaths on condo and apartment doors throughout the province, they're actually banned under the Ontario Fire Code?

It turns out that this festive pastime is indeed forbidden in Ontario's stringent fire code, a fact that surprised one blogTO reader who reached out to vent about this lesser-known rule that many unwittingly violate every holiday season.

"Did you know that anything decorative, including Christmas wreaths, are not allowed on the outside of condominium or apartment doors?" asks Anne-Marie Maugeri.

"I feel like Grinch has hit me this holiday season. When, in reality, there are many more worst things right now, like illegal fireworks and stuff flying off of balconies that are not properly held down. You think they could make an exception at one time of the year, especially when people have flammable trees inside their units or are using oils for cooking."

Unfortunately, for people like Maugeri who wish to literally deck their halls, the Ontario Fire Code is pretty strict about hallways, or egress points, and placement of combustible materials in areas that should probably be flame-free in the event of a fire.

According to the Ontario Fire Code, "Hay, straw, shavings, textiles, films or similar combustible materials shall not be used in the design and construction or as decorative features in public areas located in buildings unless approved provisions are made to control the hazard."

Enforcement of this rule varies from building to building, municipality to municipality, but it's not uncommon to see local emergency services around the province remind multi-residential building occupants of the decor ban when the holiday season rolls around.

The Fire Code prohibits flammables (i.e. doormats, door decorations, wreaths, flowers, etc.) in common area hallways of apts & condos. In case of a fire, it would intensify the flames. The Ontario Fire Code is on the Prov. of Ontario website (a hallway is a "means of egress") pic.twitter.com/sR6TPOwFl1

Toronto Community Housing maintains a "12 Days of Fire Safety and decorating guide" where it reminds residents that "materials that can burn, such as wreaths, trees and doormats, must not be placed in common areas and hallways or on doors." 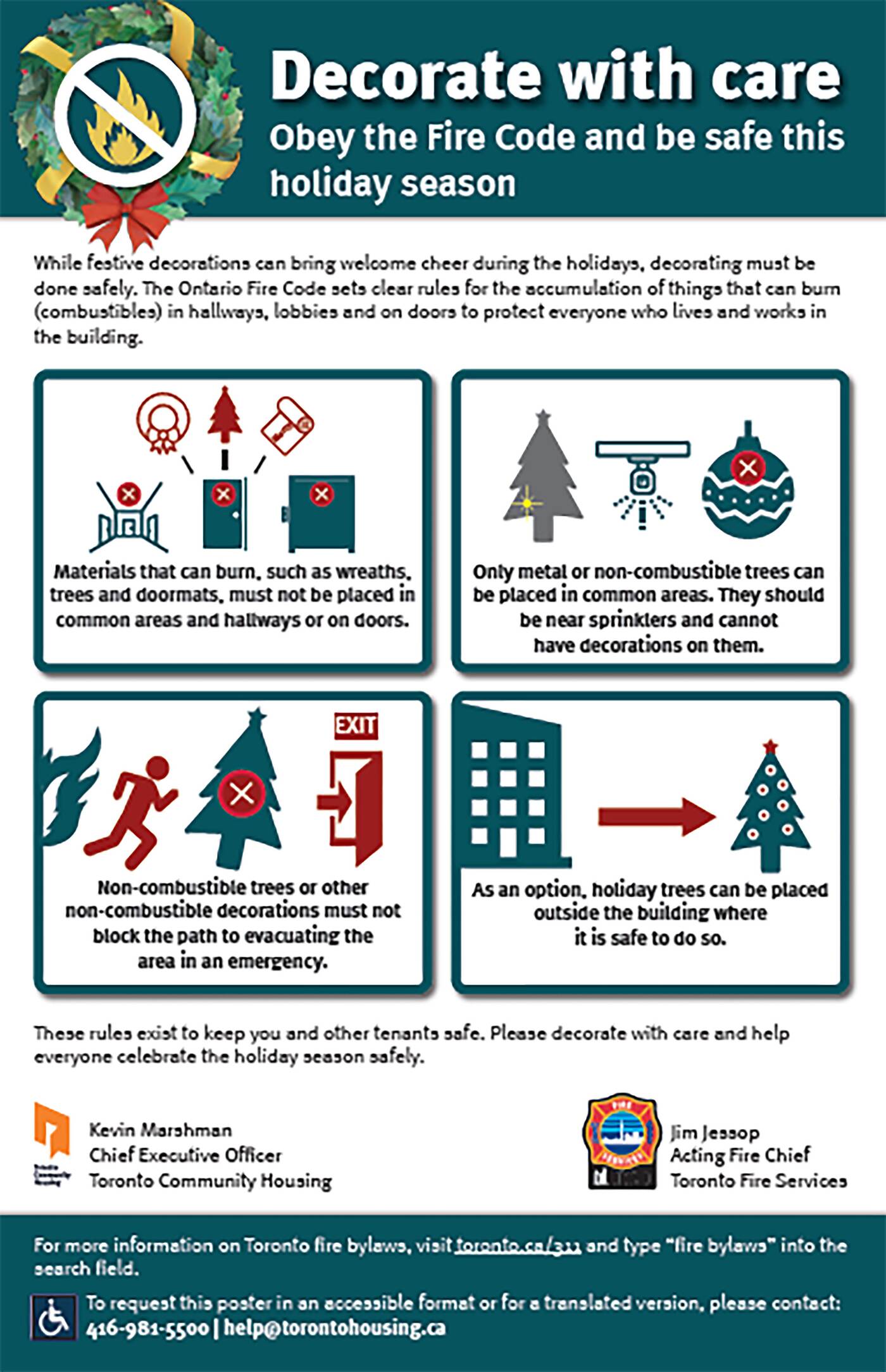 Other property managers often place notices in building lobbies and common areas this time of year, though it isn't difficult to find violations in the average apartment building hallway. 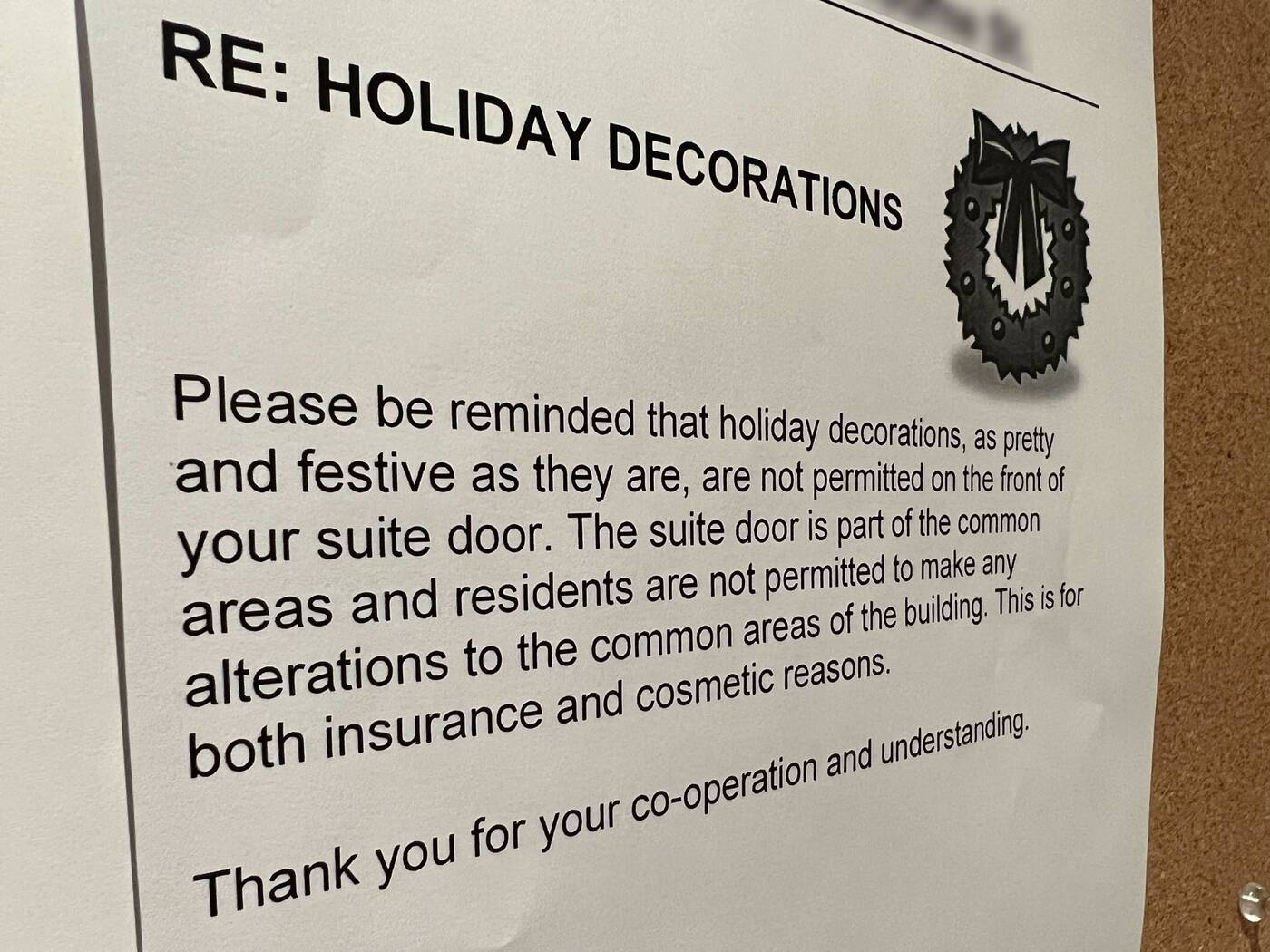 A notice in the lobby of a Toronto apartment building reminding residents that doorway decor is forbidden. Photo by Kris Pangilinan.

In several instances, residents have even been forced to take down their holiday decor due to fire safety concerns.

There could be some loopholes if you want to really challenge the specifics of the code and craft your own fireproof wreath out of non-combustible materials, but it's probably a better bet to just redirect that effort toward your interior seasonal decor.