Residents of a high-rise apartment building in downtown Toronto are running out of patience — not to mention cash — as someone continues to break into their parking garage and smash up car windows, causing thousands in damage that neither management nor security will take any responsibility for.

Nancy Sun, 31, says that her husband's truck was broken into twice over the span of just three weeks while it was parked in a dedicated monthly spot beneath her residence in a high-rise apartment building on Sherbourne Street between Bloor and Wellesley.

"On October 31st, my husband, Brian, woke up to go to work at 5:30am. When he got to his truck, he noticed both driver-side windows were broken. When he called me to go to the garage, I was in absolute shock," she told blogTO.

"I never thought this would happen to us. After looking through everything, we realized nothing important was taken but some change. They even left a brand new pair of Ray-Bans sitting on the dashboard."

While nothing of great value was stolen from the truck, Brian had to miss an entire day of work to deal with the mess and get the truck's windows fixed at a cost of about $700.

"We called our new security to come take a look, and they were just as shocked," Sun, who works in finance, said.

"They took some photos and said they will report it, but nothing else they can do. They said we can report to non-emergency police, but that's about it. They said sorry and left." 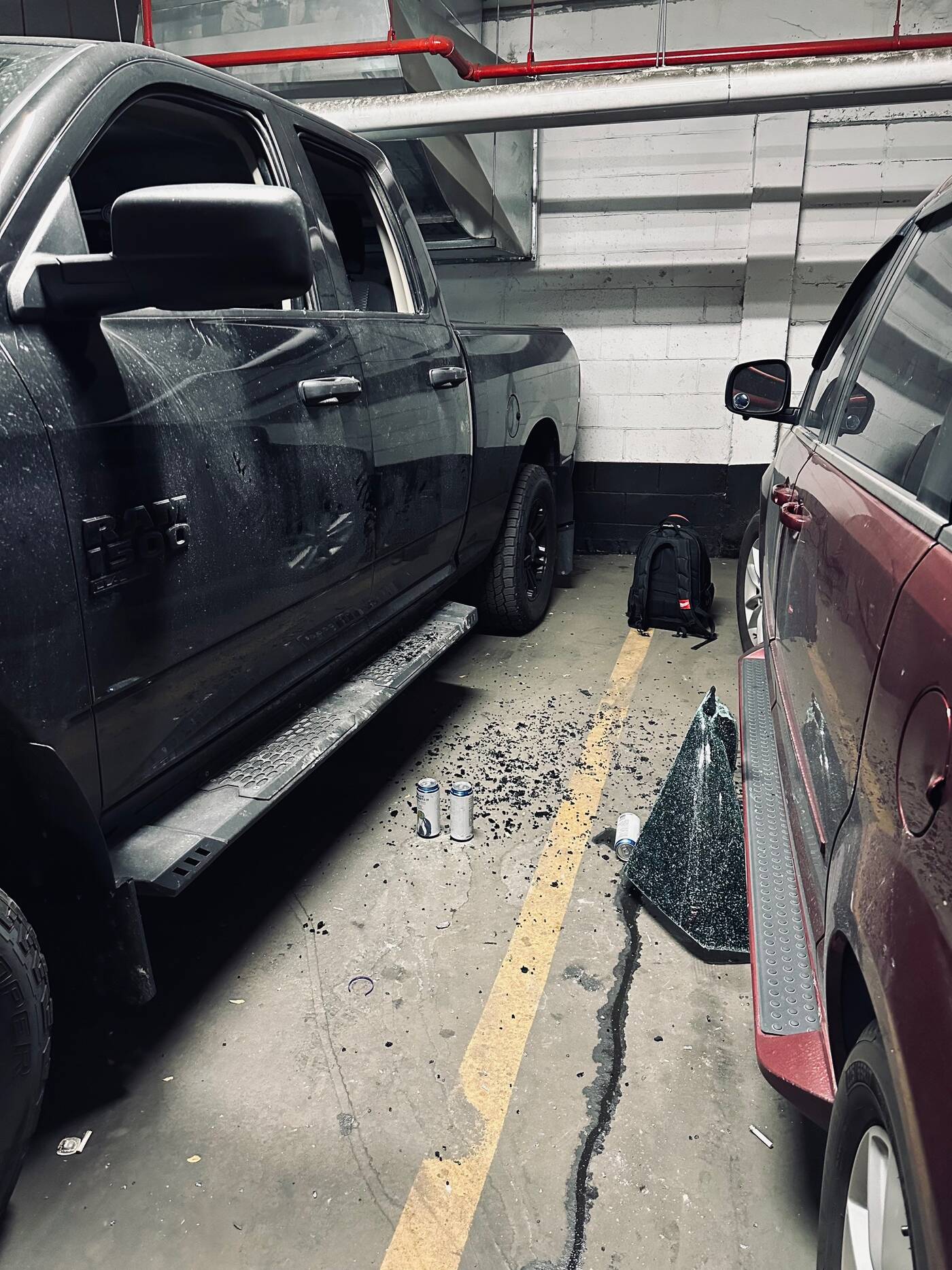 A few weeks later, on Nov. 17, Brian once again woke up to find that his truck had been broken into. This time, repairs cost around $480.

While cleaning up the mess, the couple noticed that several other cars in the garage had been broken into overnight, and it soon became clear that this wasn't an isolated problem.

One neighbour told Sun after the first incident that his car had been broken into three times. The couple found another distraught neighbour standing next to her damaged car on a different afternoon and helped her clean up.

"While we were cleaning, a security guard getting off her shift saw and spoke to us. She said it's been seven or eight cars a night lately, and not just in our building but also around the area," said Sun.

After Brian's parking pass was stolen, a frustrated parking attendant told the couple that 20 cars had been vandalized overnight within the garage on Nov. 7 alone. 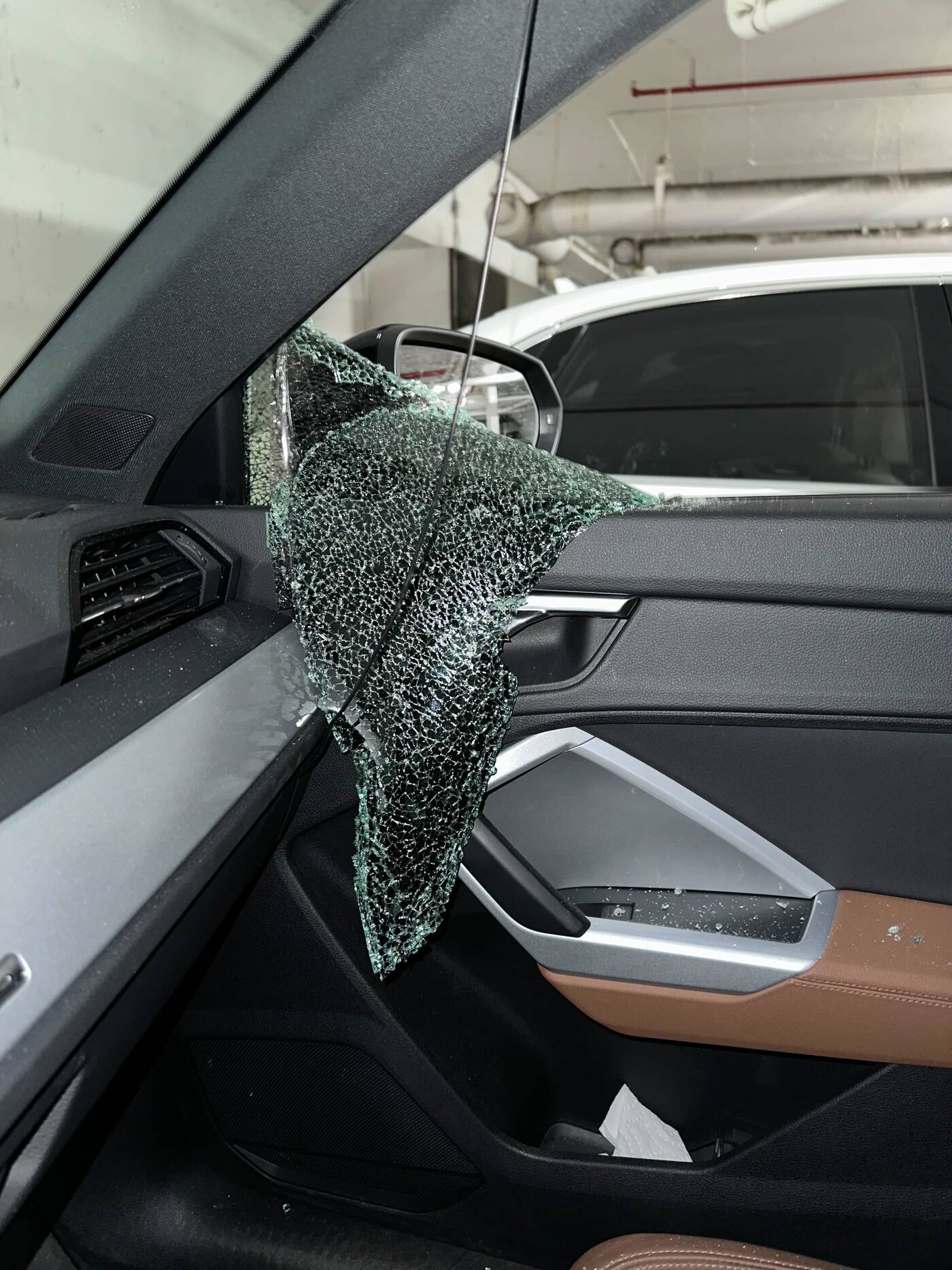 Sun says that she and her husband called security again after the second break-in, but was once again told that there wasn't much they could do aside from reporting the crime.

"I asked him who I can talk to rectify the situation, as it had been the second time for us," she says of the security guard, who again urged the couple to speak with management.

With her previous emails to management unreturned and unacknowledged, Sun decided to visit the Medallion's on-site office.

Target Park is the company responsible for operating the garage in terms of taking payments and maintaining the space, but it is not clear who is responsible for keeping items in Target's lots secure. The garage is shared between building residents and customers of nearby businesses, including FreshCo.

"Target park runs the parking in our building. We pay monthly to have a parking pass, but they don't rent out spots and are separate from Medallion," explains Sun, noting that Medallion itself hired a new security contractor for the property itself called LTS (Live To Secure) Protective Services in September of 2022.

Neither Medallion nor Target have yet to respond to multiple requests for comment from blogTO. Attempts to contact LTS Protective Services have been similarly unsuccessful.

To Target's credit, Sun did say that the parking rep she spoke to on-site was "super nice" and that he had been personally recording all of the cars that had been broken into. He promised to continue telling his own managers about the incidents. 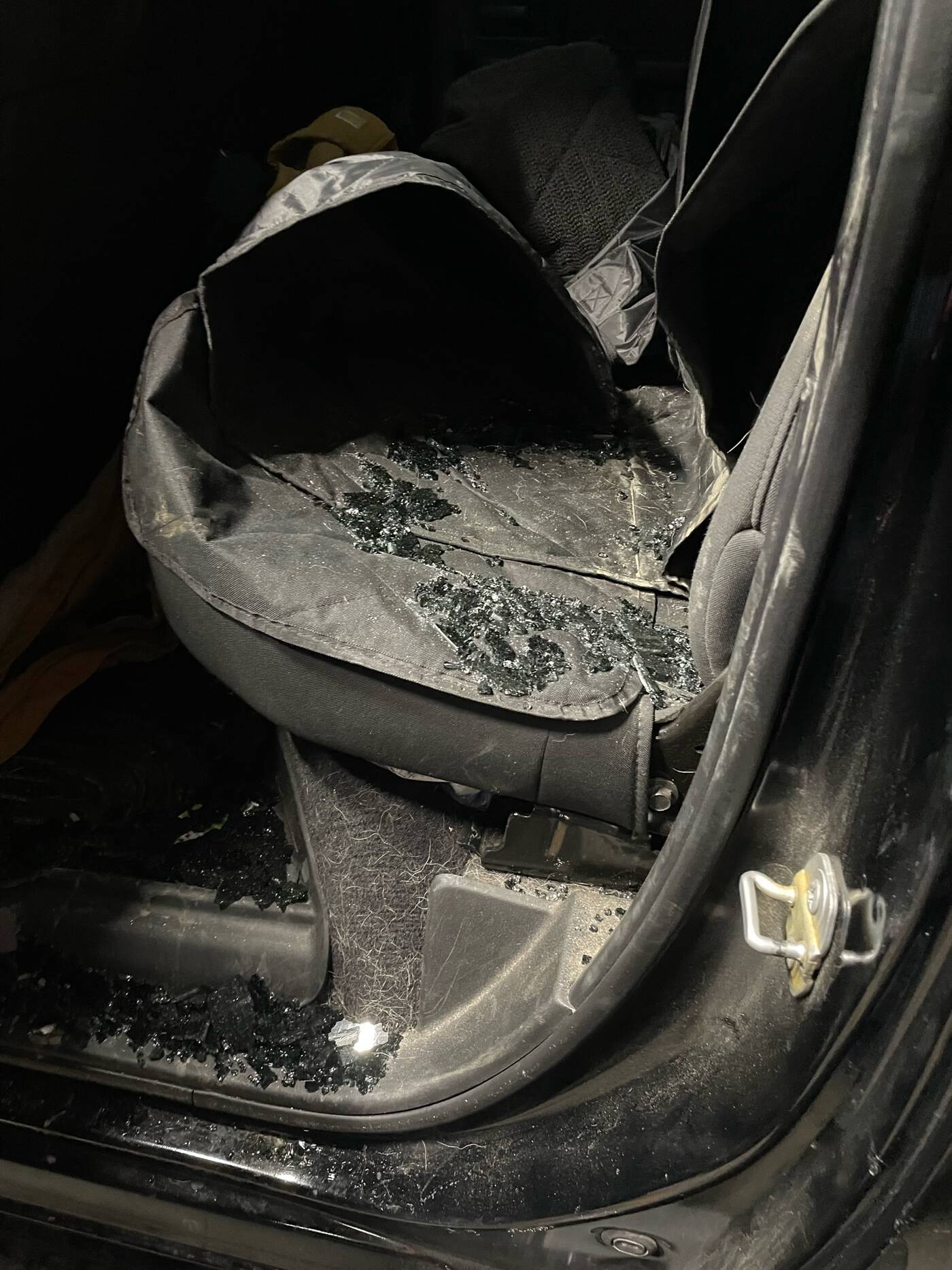 Residents of the building have been mobilizing to share their frustration and see if there's anything they can do.

After noticing that there were no cameras around in the garage at all, for instance, one of Sun's neighbours was so freaked out that he decided to roll all of his windows down and cover his car with a tarp to deter vandals.

Brian has similarly started taking everything out of his truck at night, rolling down the windows and leaving a note to say there's nothing of value inside.

"We shouldn't have to do that," says Sun. "We should feel safe to be able to park in our garage that we pay monthly for."

"The building must know what has been happening but has not done anything about it. Everyone is sending me to other people and there is a misconnection between security, Target Park and Medallion, and it needs to be resolved," she continued, noting that many people don't feel safe and are losing days of work to deal with their vandalized vehicles.

"Me and Brian are fortunate to have decent jobs, but what about the people who don't? People who work multiple jobs just to get by, elderly people, single parents... No one should be going through this. We should not be living in fear and anxiety, we should not be going to bed every night hoping not to wake up to broken windows."