Life has pretty much gone back to normal (or some version of the "new normal" we were all promised post-lockdown times) for many in Toronto, now that offices have reopened, and we're allowed to see our friends in real life again at desirable venues of our choosing.

Except, it hasn't. We're different. Two years of working from home and constantly changing regulations that directly impact one's daily life will do that, it seems.

A newly-published study by The Toronto Foundation, conducted in partnership with Environics and more than a dozen leading community organizations across the city, suggests that Toronto residents today have fewer close contacts than they did in 2018.

One in 12 of more than 4,000 people surveyed as part of the study reported having no relations at all that they could call for help or social support when needed.

"In the face of more limited opportunities to interact, Torontonians today report having fewer close family members and friends than in 2018," reads the executive summary for the 2022 Toronto Social Capital Study, released this week.

The study also found that people see their companions in person less often now than they were in 2018, leading to a decline in "the proportion who are satisfied with how frequently they communicate with their close friends and relatives."

📄New Report released today: Toronto Social Capital Study 2022, in partnership with @TorontoFdn. See the report athttps://t.co/nga5MdTXNm
and we will see many of you at the report launch event starting momentarily.#socialcapital #researchdata pic.twitter.com/FuusYivPsX

Conducted between May 27 and September 10 of this year, the social capital survey is described as a "comprehensive look at the wellbeing of Toronto residents viewed in terms of social networks, social trust, civic engagement and neighbourhood support."

It is the second such study of its kind. The first was conducted in 2018, before the health crisis, giving researchers a unique opportunity to assess whether the pandemic brought Toronto residents closer together or pushed them further apart.

Their findings in surveying 4,163 Torontonians were both good and bad.

"And more than two years into the pandemic, levels of confidence in most local institutions—including the school system, city hall, local businesses and neighbourhood centres—remain unchanged," reads a report released by the Toronto Foundation and Environics on the study.

"At the same time, the 2022 Toronto Social Capital Study clearly illustrates the toll the pandemic has taken."

While the majority of people in the city report that they have companions they can call upon for help, that they find the city safe and that they have helpful neighbours, hundreds of thousands do not.

Seniors and people with lower incomes, disabilities, poor mental health and employment issues are among the most likely to feel socially disconnected.

Across the city, social networks have shrunk during the pandemic. This has had a marked impact on Torontonians with a disability*

Read about the impact of diminished social networks and what it means for our wellbeing at https://t.co/2Sz6so06qI#TOSocialCapital @RabiaKhedr pic.twitter.com/jveq38r1ke

Another finding that the foundation labelled as "striking" relates to community engagement.

According to the survey's results, Toronto residents today are less likely than they were four years ago to be members of organizations and associations.

"This decline is most likely a result of the COVID-19 pandemic, as many groups suspended their activities, while many members did not feel safe participating, even when activities resumed. What is not yet clear is whether and how quickly these forms of engagement will rebound," reports The Toronto Institute.

Researchers also found that Torontonians in 2022 are "less likely to have volunteered or donated money or goods to an organization or charity" than they were in 2018, posing serious challenges to the nonprofit sector.

Perhaps most concerning is the finding that Toronto residents were far less likely in 2022 to report high life satisfaction and good health than they were in 2018.

"These declines generally were experienced by residents from all backgrounds." 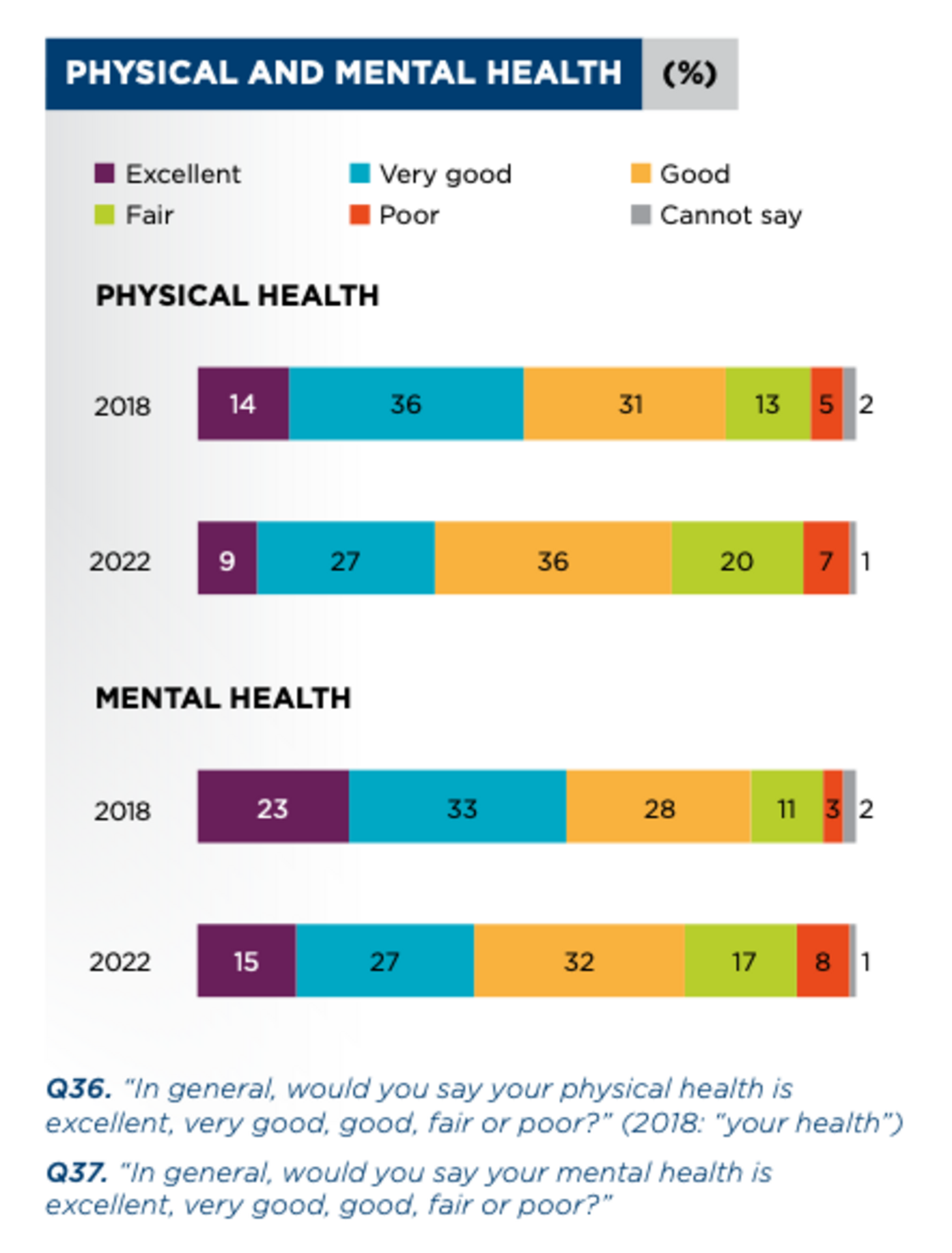 That said, rates of wellbeing generally tend to improve with income and age, according to the study's findings.

"The life satisfaction, overall wellbeing and mental health of younger adults in Toronto (and particularly younger women) remain much lower than average," states the report.

What hasn't changed much, according to the foundation, is the level of inequality that exists among different groups in the city when it comes to social capital, and the inability of more vulnerable groups to access the services they need.

Single parents, Black Torontonians, those with disabilities and those who identify as LGBTQ2S+ are all more likely to experience income insecurity as well as have distrust for institutions and police.

"Torontonians with lower incomes or who are unemployed are among those who stand out most consistently in this regard."

You can read the full, 84-page-long report right here if you're keen on learning more. It's a fascinating, albeit disturbing read at times, but one that offers hope by way of inspiring action among community organizations.

"While it's encouraging to see that social capital is still relatively strong, we've lost ground, and this has the greatest consequences for people impacted by systemic inequities," said Daniele Zanotti, President and CEO of United Way Greater Toronto, in the report.

"Strengthening a network of local support that can cut across those gaps and provide a bridge to social capital is central to United Way's mission... The changes we need, for you, for me, for all of us across this region, to reach our collective potential, start with trust. And that's why social capital matters."