Cops and cyclists weren't the only feuding factions to clash in Toronto's High Park this week. Things may have gotten even more heated, in fact, between some people fishing and someone who took up issue with how they were doing it.

Marni Ugar was walking near Grenadier Pond on Monday when she happened upon some young men fishing.

Knowing that the pond is a sensitive ecosystem and habitat for many species of bird, fish, turtle and other wildlife, she was surprised to learn that such a thing was even permitted (the rules are a bit convoluted).

"Because I knew they wouldn't stop fishing, I asked that they please have some mercy and immediately kill the fish. 'Fish feel pain' I said," Ugar wrote on Facebook after returning home from the park.

"There were two squirming fish in a basket, I felt their pain. The two fishing didn't care and so, I grabbed the basket and released the two fish into the water."

The fish (who, for the record, can absolutely feel pain) may have been saved, but the tables quickly turned on Ugar, who was terrified by what happened next.

Tensions were high at Toronto's Grenadier Pond this week after a woman picked up a fisherman's bucket and dumped all the fish back into the water. - 📹 submitted to blogTO #Toronto #GrenadierPond pic.twitter.com/kVyyUlmD3n

The animal lover and activist says that they began threatening her, calling her a "b*tch" and a "c*nt." They screamed at her, saying that the fish were their property.

"I requested that if they were going to fish, to at least immediately kill them so that they didn't prolong their suffering. They wouldn't, and so, seeing the suffering — two fish squirming in a basket — I put the fish back into the water; two small fish who just wanted to live in Grenadier," Ugar told blogTO this week.

"I tried leaving, they followed me, threatening, saying they'd find a way to hurt me," she said. "A couple stopped to help me, then a city worker came by; they could see I was in danger."

Fortunately, as seen in the video above, bystanders were able to deter the men from further harassment. The city worker was so concerned by how the young men were treating Ugar, she said, that he followed her out of the park to make sure they didn't come after her.

"Without others coming to my aide, I, a resident/home owner in Parkdale High Park, might not have made it home. I was being stalked and called names," she said.

"They were screaming, saying the fish were their property. How could beings swimming freely moments ago be property? "

"What would we do if somebody held us underwater? How the fish respond when taken out of water is exactly how we would respond if we were held down," said Ugar of why she did what she did. "It's called empathy." 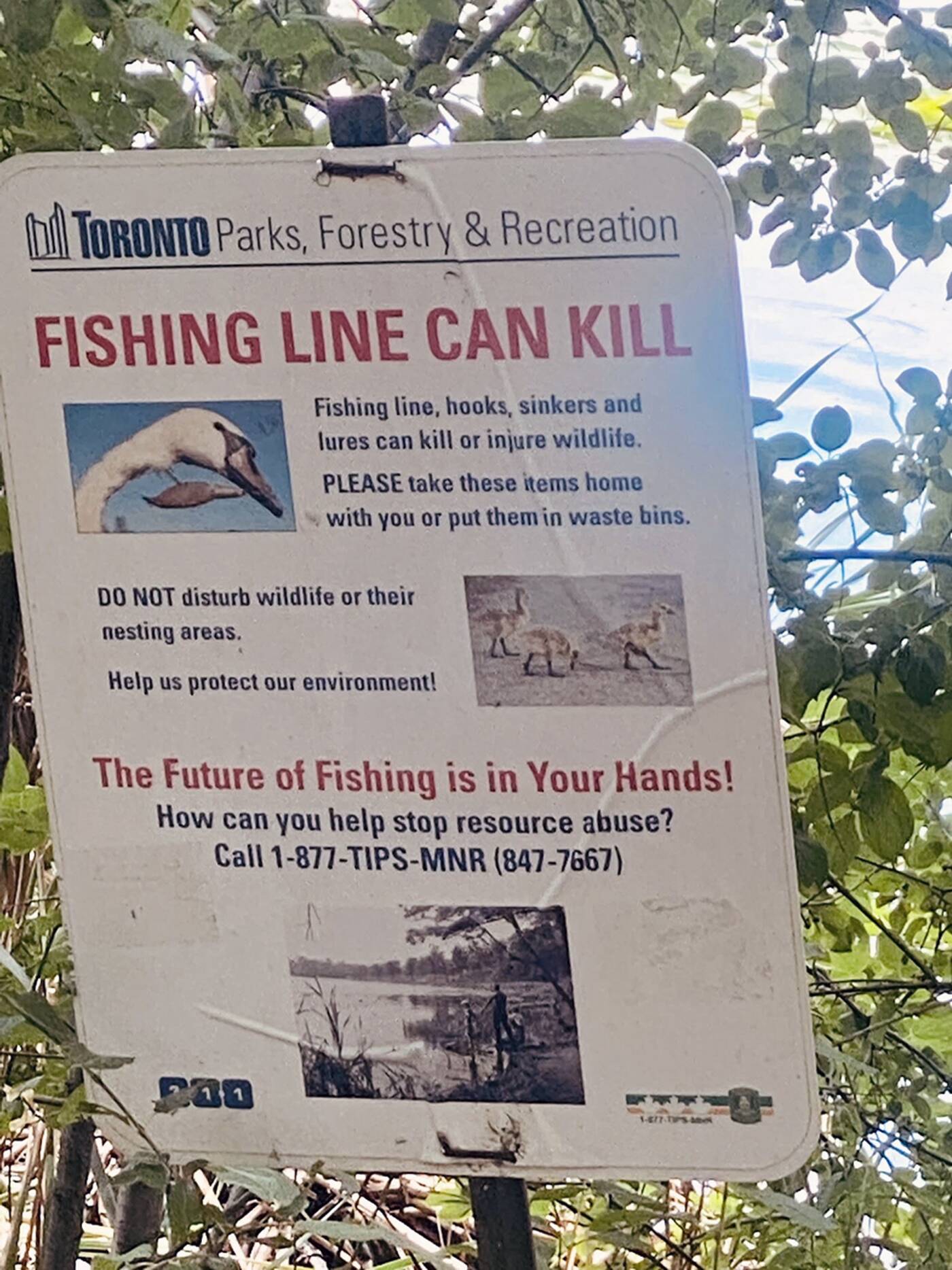 A sign in Toronto's High Park warning people who fish to do so without leaving behind material that could injure other wildlife. Photo via Marni Ugar.

Curious about the legality of fishing in High Park, Ugar went back to the scene another day to take some photos of the signs she'd observed around Grenadier Pond.

"PLEASE take these items home with you and put them in waste bins. DO NOT disturb wildlife or their nesting areas. Help us protect our environment!"

The sign contains a phone number for people to call if the suspect resources are being abused, as well as two prominent photos of aquatic birds.

"It mentions hurting wildlife, but it doesn't mention that it hurts and kills fish. Are they not wildlife?" said Ugar to blogTO of the sign.

"I spoke to a city worker today who told me that no one follows the law when fishing. They're not supposed to take fish under a certain size out of the water, young fish that still need to be there. As a result the water has been depleted in the past."

Indeed, the pond has been in need of rehabilitation before, as recently as 1994, when it was re-stocked with fish including Largemouth Bass and Northern Pike.

Regardless, the City of Toronto did confirm that "fishing is permitted in designated sections of Grenadier Pond, specifically the south end of pond."

"Signs are posted to delineate where you can and cannot fish," said a media representative for the city.

"Those wishing to fish must hold a valid Outdoors Card and a fishing license tag and observe sport fishing regulations to protect wildlife in the park."

Ugar would like to see fishing banned altogether in the sprawling park.

"When will we turn High Park into a progressive park?" she said. "I've been fighting for the cyclists getting ticketed, and now I'm fighting for the wildlife. It's their home, why can't we respect it?"