While Saturday's wicked storm was fairly tame and short-lived in Toronto, other parts of Ontario weren't so lucky, with many people somehow still without power, internet or full cellular service five days later.

Hydro One is doing its best to urgently address the ongoing issues, but it has advised customers that the damage was so extensive that "restoration efforts are expected to continue for several more days" before things are fully fixed for all affected areas.

DAY 5 with no power begins.

These are not once in a lifetime events. Because this is my FOURTH blackout disaster in Ontario and I'm only in my early 40s.

According to the provider, more than a whopping 1,800 utility poles in the province were broken due to high winds, heavy rain, flying debris and lightning, along with tons of downed and mangled power lines, and damage to multiple transmission towers — all of which has meant tens of thousands of households are still without service.

Outage maps show just how widespread and severe the blackout is, stretching from smaller snags around Chatham and Brantford up to Bradford and Aurora, and then far bigger disruptions moving eastward from the GTA all the way past Ottawa. 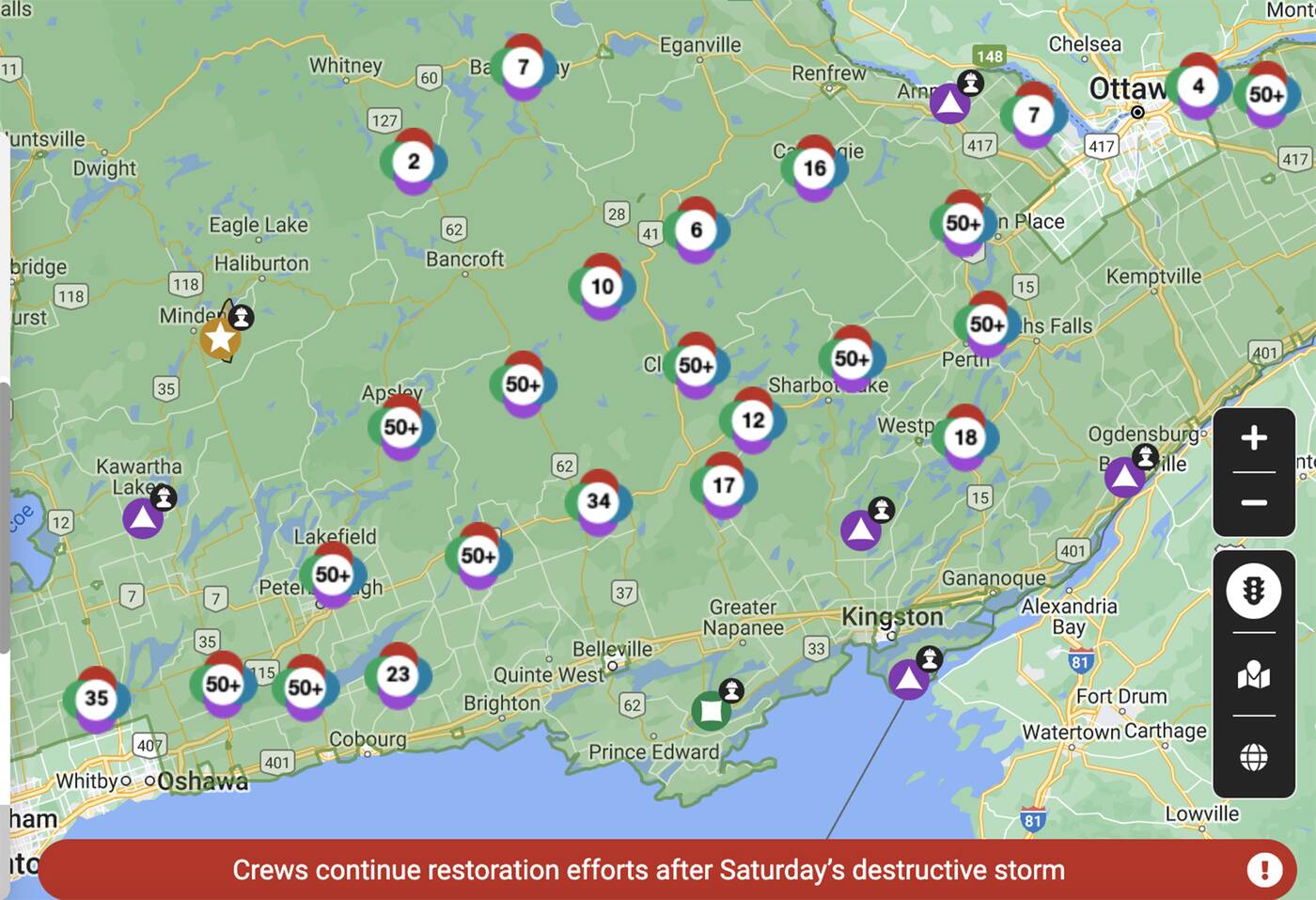 Hydro One's outage map still shows that tens of thousands of people have been dealing with a blackout for five days now.

Ottawa and Peterborough are among the hardest-hit regions, with most residents still dealing with no electricity whatsoever on top of spotty cell reception.

But, some 53,000 people in the nation's capital can apparently expect to have their electricity back on sometime on Friday, in part thanks to dozens of Toronto Hydro crews sent out from the city to help.

Some townships, like Bancroft, Tweed and Perth, will still have to wait days before things are fixed — and in these smaller locales, many rely on the grid for more than just their lights, outlets, A/C and internet, but also things like water (if they have a well).

Still no power in the West End.

Had to throw out two fridges worth of food.

The province is now very familiar with the word derecho, the term to describe the rare type of summer storm that left at least 10 dead.

Derechos are fast-moving, with tornado-like winds (though they are straight rather than cyclical), flash flooding and more, and happen amid groupings of severe thunderstorms, like the one we had in Toronto.

The Ontario Student Transportation Authority has posted a list of cancelled bus routes for tomorrow, but the webpage isn’t currently loading. A number of schools will also be closed due to power outages. #ottnews https://t.co/KBFO7V8SHU

While the city was only under a severe thunderstorm warning, other municipalities saw actual tornadoes and had to declare full-on states of emergency and close schools due to the aftermath.

Initially, more than 500,000 residents were affected and 150,000 were still going without electricity by Tuesday, but that number is now closer to 73,000 as of Thursday.

Following power outages caused by storms in parts of Ontario and Quebec, we are continuing to make progress restoring services for impacted customers. Our crews have been on the ground working around the clock to get remaining customers back online. Thank you for your patience.

As the cleanup of downed trees and property damage continues, many are wondering if this marks the worst outage in the province's history due to its length and scope.