Toronto was just ranked one of the kinkiest cities on earth

Toronto is a lot of things to a lot of people, but "sensual" isn't exactly high up on the list of common descriptors for Canada's biggest city.

These are all things I've actually heard people say about Toronto, visitors and residents alike — save for the whole "smells like pee" bit, which only tourists tend to say. Are they jealous haters, or have those of us who live here simply stopped noticing the smell? Have our noses been burnt by so much time spent in bar basement bathrooms?

The 6ix came in even stronger on the same company's list of "the world's most sensual menus," with Toronto ranking fourth behind only London, New York and Paris.

Analysts looked at factors including fetish website sign-ups, sex events, strip clubs, the number of people making money on OnlyFans and one-hour hotels when compiling its ranking of the most-seductive cities globally. Image via The Bottle Club.

While I would encourage anyone to be skeptical of sociographic data from a website called "The Bottle Club," the company actually used some pretty straightforward methodology to compile its rankings.

Taking a seed list of the top 30 major cities worldwide, The Bottle Club says it commissioned "experts" to explore 10 different factors that it thinks makes each city seductive.

"Experts at The Bottle Club have explored the cities around the world to determine the destinations that radiate sexual energy, serve up sensual menus and allow you to indulge in your deepest, darkest desires," reads a post sharing the results of this analysis.

"From strip clubs to freaky fetishes, large populations making money on OnlyFans, and restaurants serving up aphrodisiacs to set an alluring mood, these are the most seductive cities in the world to get in touch with your flirtatious side." 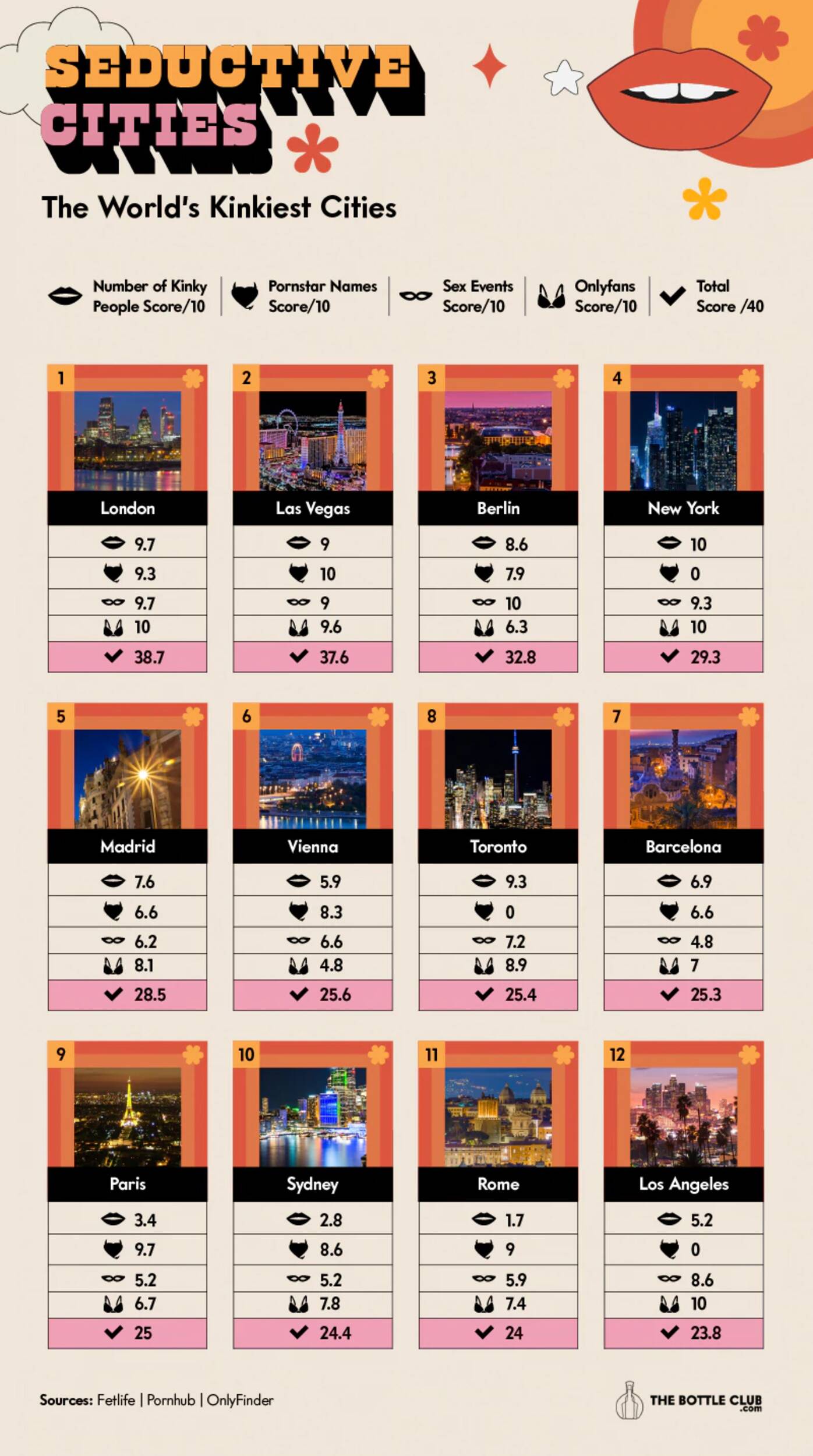 Toronto was found to be on the kinkier side of things in a recent analysis of 30 global cities. Image via The Bottle club.

Toronto fared decently on both lists, considering how many traditionally "sexier" cities it was pitted against, but it only managed to earn a top three score for one of the factors looked at: Kinky people.

Ontario's capital took eight place on the "world's kinkiest cities" ranking, but was found to have the highest number of kinky people behind only London and New York with a score of 9.3 out of 10.

With zero pornographic film stars named after the city and a moderate "sex events" score (sourced from FetLife data), Toronto did post an impressive OnlyFans score with 8.9 out of 10.

Las Vegas, Los Angeles, New York and London are the only major cities with a higher proportion of OnlyFans users than Toronto.