How's your day going so far? Good? Cool, let me ruin that for you real quick.

There is an insect so large, so terrifying, and with a bite so painful you'll have a difficult time believing that it exists right here in Toronto.

Lethocerus americanus is just one species in the Belostomatidae family, better known as giant water bugs. And these nasty critters, native to southern Canada and the U.S., are just as menacing as they look.

As the name implies, these aggressive predatory insects can grow to gargantuan sizes. If you exclude wingspan, they are the largest insects in the country, with typical specimens measuring between 5 to 6 cm in length.

The americanus is still somehow among the smaller Belostomatidae species, with other examples that can grow longer than 12 cm elsewhere in the world.

Other fearsome nicknames for the giant water bug like "toe-biter" and "alligator tick" only hint at the horrible pain these armoured beasts can inflict on unsuspecting swimmers or people walking near marshes and other freshwater bodies.

They primarily feed on other insects, and a range of aquatic life such as small fish and tadpoles, but also some more durable opponents like crustaceans, including crabs and crayfish. In a surprising food chain placement, "there is record of one eating a small snake" according to Canadian Geographic.

Lethocerus americanus, Giant water bug. This 5-6 cm long thing lives in #Toronto . I don't know if I will be able to sleep tonight! pic.twitter.com/sFK8dSLsUl

And it gets worse in the way they take down their victims.

These highly-evolved killing machines stab their prey with a proboscis, injecting a specialized saliva that liquefies the unfortunate victim from within. The giant water bug then literally drinks the prey's soupified guts like some kind of macabre slushie, which is why getting bitten by one of these things is so much worse than just the initial stab.

Oh, and they can fly. Like other bugs, they can be attracted to lights at night, gaining them the less worrying nickname of "electric-light bug."

So that has to be about as terrifying as these mammoth bugs get, right? I mean, how could they possibly be any more fearsome and revolting than already described?

Well, buckle up and get ready for some upsetting imagery, as some species of giant water bug females lay clusters of their repulsive eggs on the back of the male, which are then carried until they hatch.

Luckily, that is not the case with the local example, which instead lays eggs on vegetation near water. 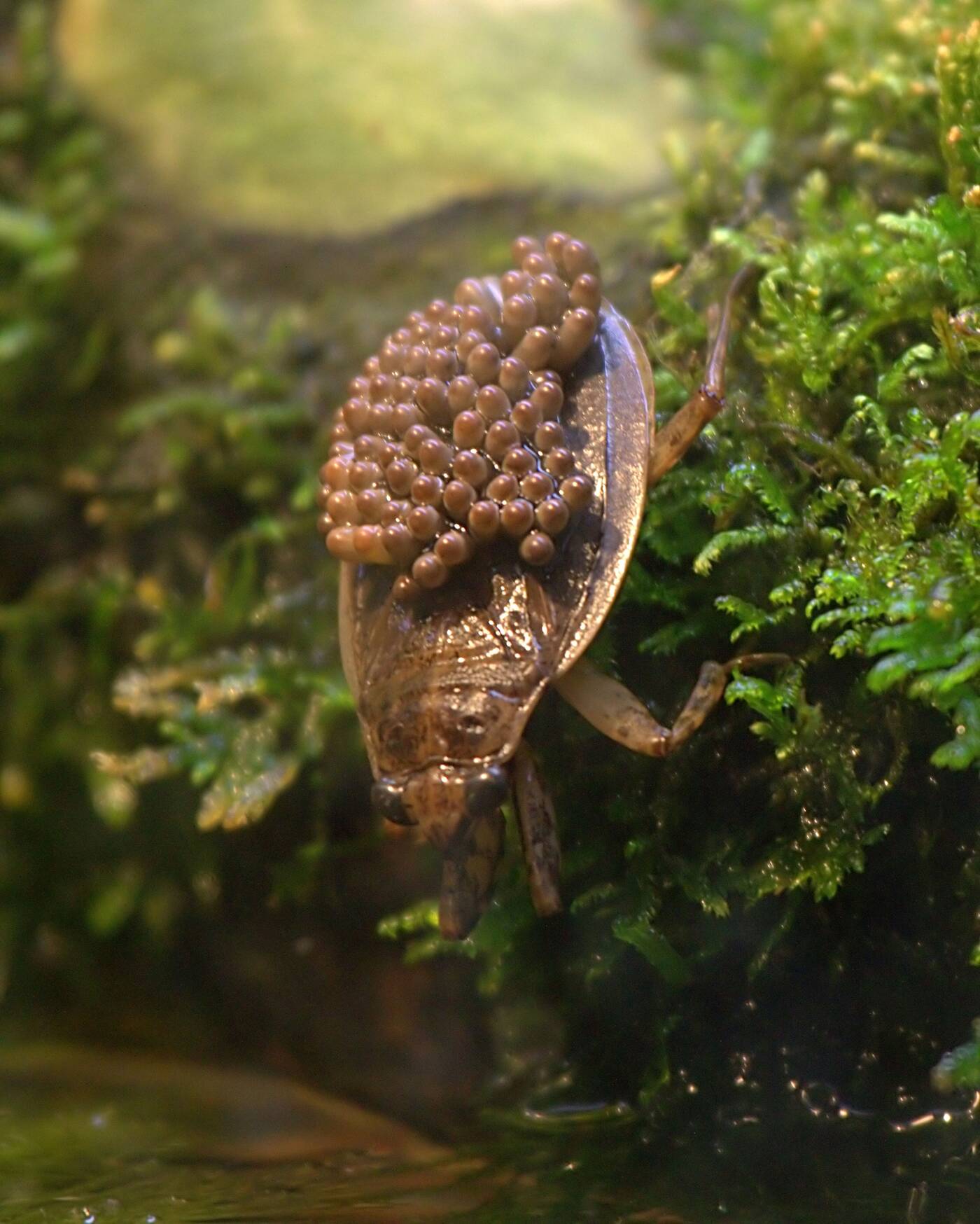 Another species of giant water bug carrying eggs on its back. Photo by Greg Hume via Wikimedia.

Next time you're out for a walk through a Toronto nature trail or wading in a murky body of water, just know that one of these monsters could be lurking, ready to split a painful new hole in your foot.

But humans always get the last laugh, and while these creepy-crawlies may give us the odd stab in the foot, giant water bugs are considered a delicacy in many countries, sold as street food.

So take that, nature.