Everyone loves a good deal, and whether you're after bulk candy, curiously cheap seasonal decor, pet costumes, or suspect off-brand cologne and pregnancy tests, discount retailer Dollarama has got you covered.

They brand has also got many Toronto buildings covered in its vibrant yet cheap-looking green and yellow branding, and it looks like the dollar store giant is about to expand in the city once again.

But this time, Dollarama wants to put its sickly-looking signage up on a majestic old building covered by multiple heritage protections.

A recent signage application submitted with the City details plans to bring a Dollarama to the heart of Toronto's Entertainment District, the submission revealing renderings and diagrams of the new location in the works for 317 Adelaide Street West, a stunning Depression-era office tower also known as The Commodore Building. 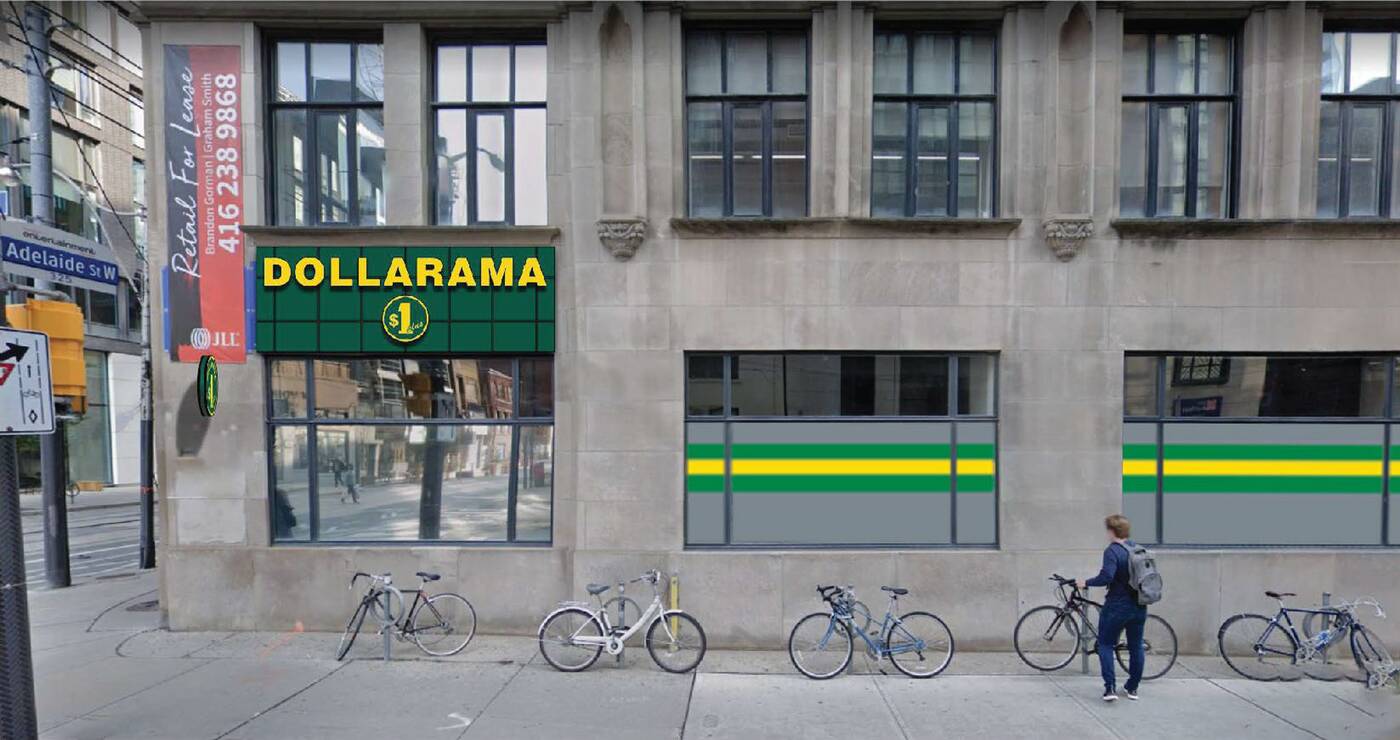 Designated under Part IV Of The Heritage Act, and within the coverage area of the broader King-Spadina Heritage Conservation District, the building has been largely insulated from the wave of vertical change occurring across the surrounding blocks.

Heritage protections have kept the building in place as its surroundings are replaced by condo towers, but these measures likely won't be enough to stop gaudy new retail signage from being tacked onto the majestic base of this landmark.

The building's ground floor has been emblazoned with temporary retail leasing signs since 2020, for pretty obvious reasons. These will finally go, though the application indicates that the entire street frontages along Adelaide and Peter, and even the laneway to the east will soon be treated in Dollarama's signature yellow and green look.

A pair of 3.25 metre-wide signs with the Dollarama branding would be installed over the primary entrances, while smaller coin-shaped signs would project (and stand out wildly) from the beautiful 1929 stonework at the tower's base.

And if the signage wasn't already jarring enough on its own, Dollarama plans on blocking out ground-level windows from within using vinyl window coverings with opaque grey and horizontal strips of those very loud Dollarama colours.

Rendering showing how windows will be blocked out by interior wraps, part of the building's heritage character.

Dollarama confirmed to blogTO on Tuesday that the chain "will be opening a store at 317 Adelaide St. West in 2022." The 11,210 square-foot store's upcoming opening will end a lengthy vacancy for the prominent address, but it'll come with a shot of incongruous colour and blanked out windows.