Saturday morning I made may way to the Scarborough Town Centre parking lot with the purpose of speaking to the participants of what has been called the "Freedom Convoy," the better to understand their motivations and goals.

Scarborough Town Centre had been advertised on social media platforms as the easternmost of several assembly points for members of the many convoys that would eventually make their way to Queen's Park, the site of the provincial seat of government.

And while the parking lot was close to empty when I arrived just after 9:00 a.m., I had no trouble spotting the ten or so convoy vehicles that had assembled as nearly all were bedecked with Canadian flags and all manner of colourful hand-drawn placards.

And even as I crossed the parking lot to begin what would become more than two hours of interviews, I could see that numbers were steadily increasing as cars, SUVs, pickup trucks, and a few big rigs pulled in from every direction. 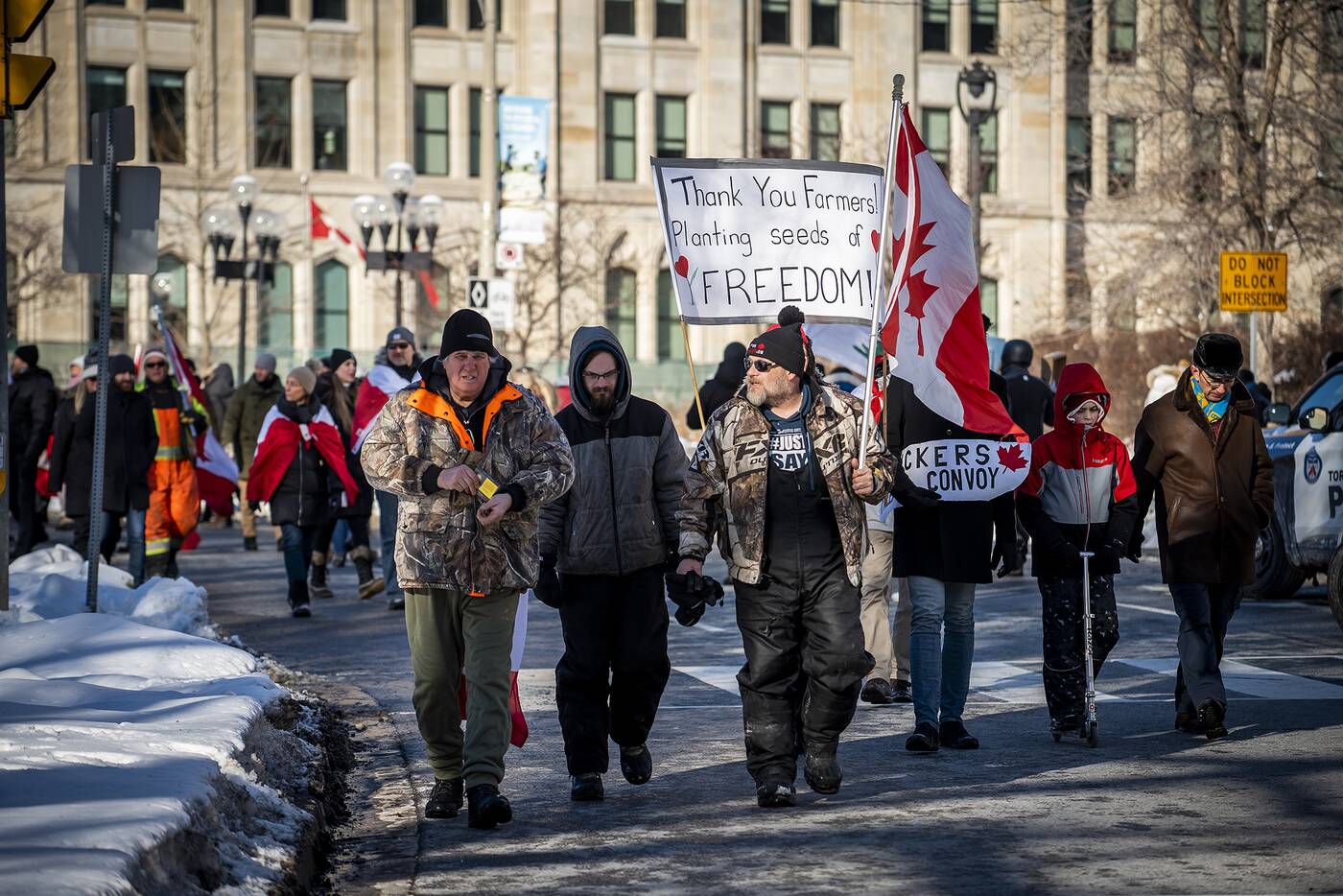 Protesters marching on Saturday in Toronto. Photo by Hector Vasquez.

What reservations I may have felt about soliciting interviews from demonstrators participating in a movement that had received seriously negative media coverage in recent days were quickly allayed after speaking to Robert, who proved to be as gregarious and genuinely friendly as most everyone I would speak to that morning.

"I want the discrimination to end between the vaxxed and non-vaxxed," was how Robert summarized the goals of a movement that, as he saw it, was fundamentally about freedom of choice. 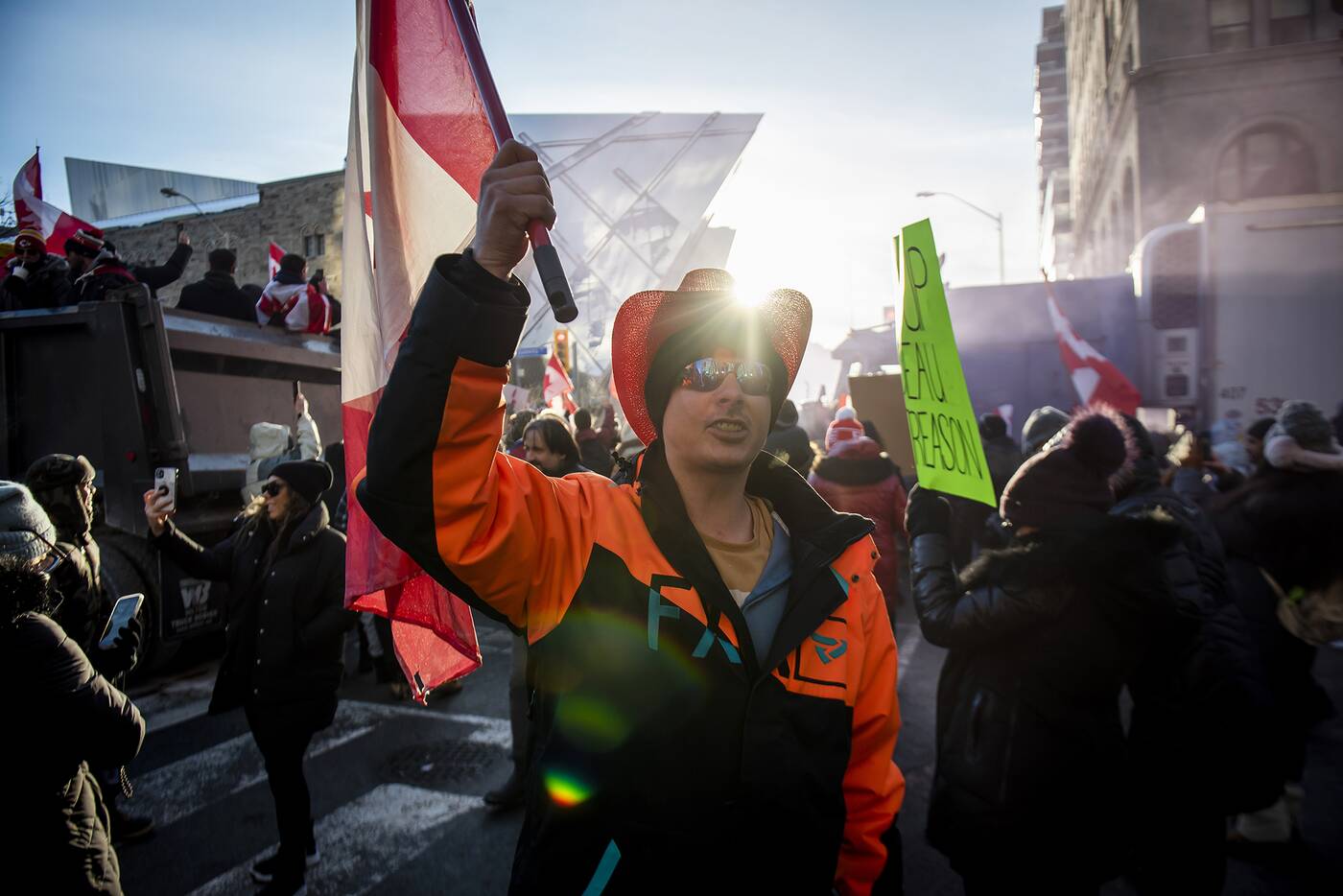 Many waved Canadian flags at the protest. Photo by Hector Vasquez.

It is not that COVID is "a hoax," he went on to explain, but that the response by health authorities was extreme: "It's been taken further than it has to be."

Robert's position that the right to personal autonomy outweighed all other vaccine-related concerns was one that would be echoed by every other person I interviewed.

As it would turn out, Robert hadn't always held this position. 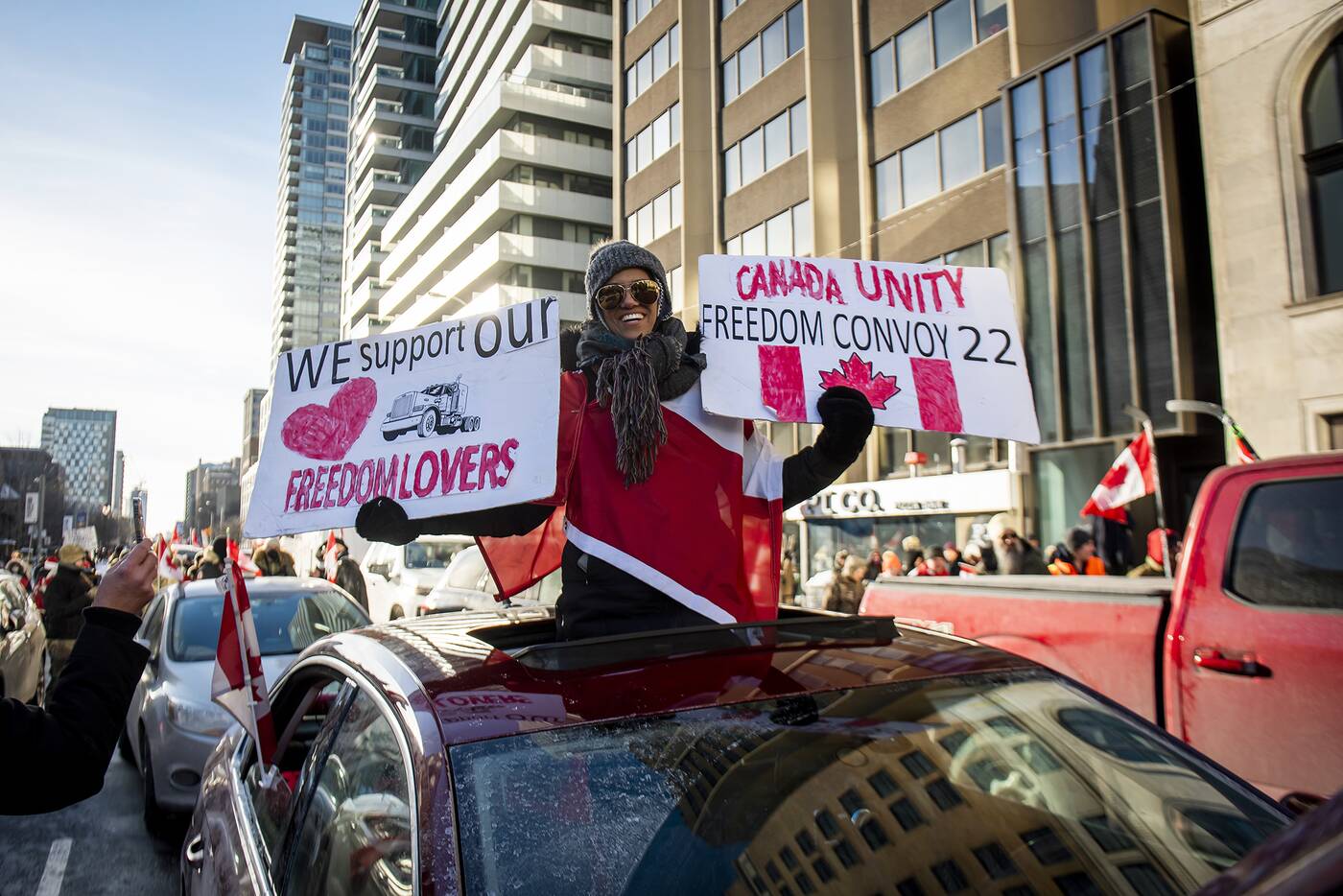 A supporter of the "Freedom Convoy" on Bloor St. Photo by Hector Vasquez.

"My opinion definitely changed over the course of time," he explained: "When COVID first hit, like everyone else I didn't know what to make of it." And like his friends and family, Robert said that he stayed home when mandated to do so.

As things "dragged on," however, he became increasingly distrustful of the government and a media ecosystem that he suspected of "corruption."

For Connie, who, like Robert, confessed to never having previously participated in a protest movement, her decision to become an activist grew from events taking place considerably closer to home. 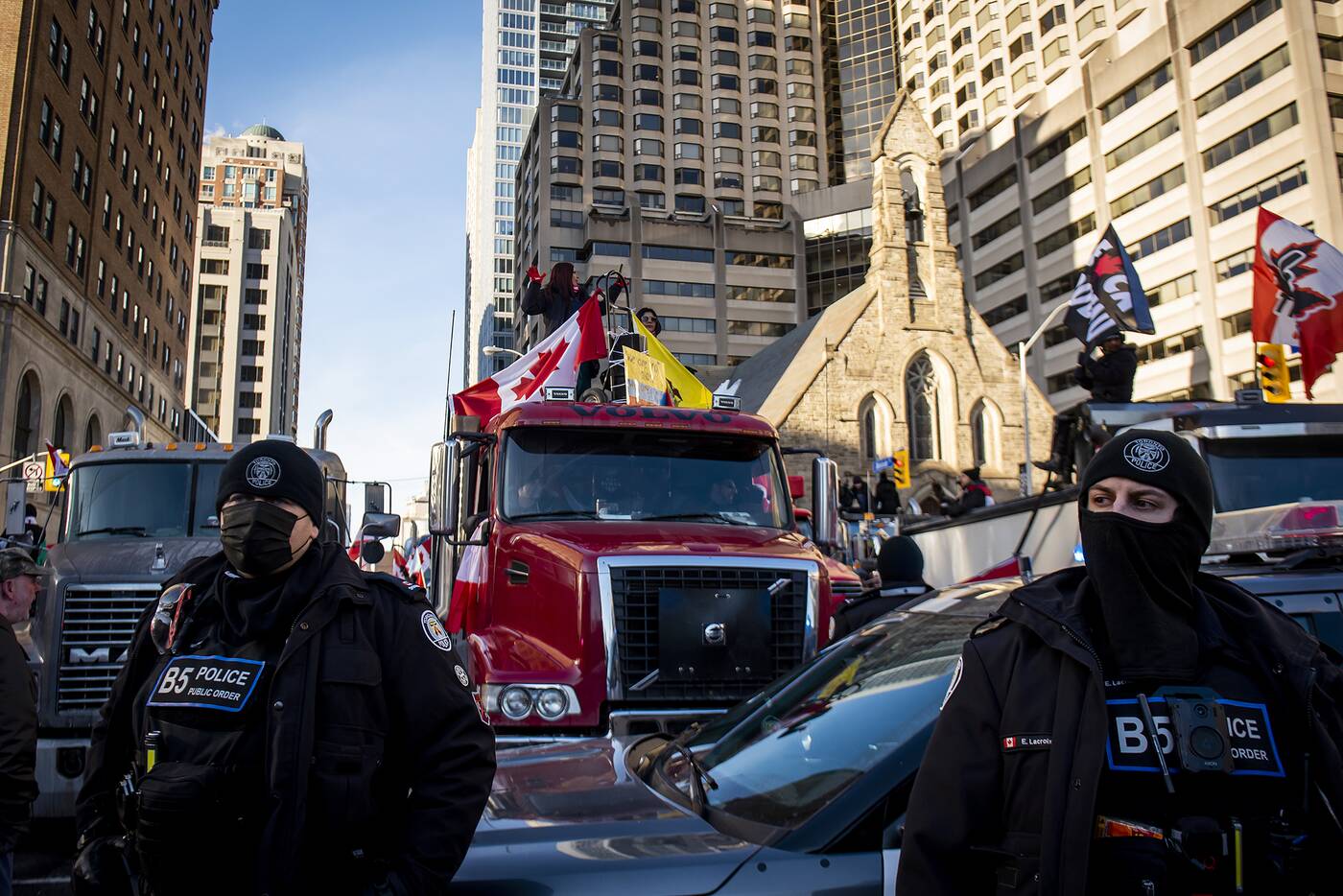 During the lockdowns, Connie explained (tearing up as she did so), "my sixteen-year-old began having thoughts of suicide. She didn't want to leave her room. I'm doing this for my kids and everyone else's kids in this country."

While not as desperate as the situation Connie described to me, the other parents I interviewed inevitably cited the debilitating effects of extended lockdowns or extended mask use on their children as reasons for showing up in minus double-digit temperature to take part in what is generally portrayed as an "anti-vaccine mandate" movement. 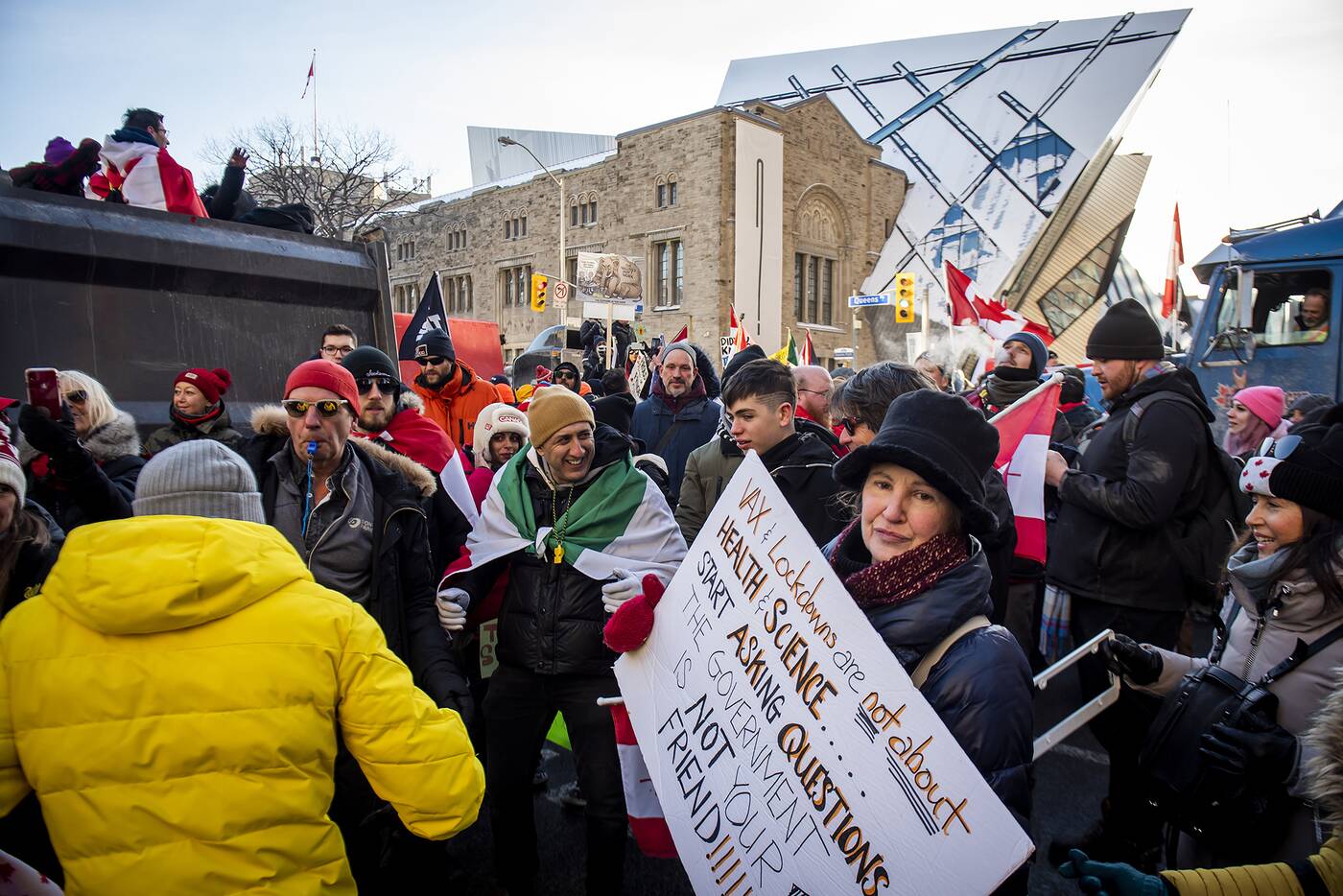 A crowd of protesters near the ROM at Queen's Park and Bloor. Photo by Hector Vasquez.

For other interviewees, the decision to take up the anti-mandate cause sprang from their experience growing up in and then emigrating from countries with genuinely authoritarian regimes.

Another first-time protestor, Elena explained that she decided to support the movement because she feels strongly that a government should have no right to "mandate what I should do to my body." 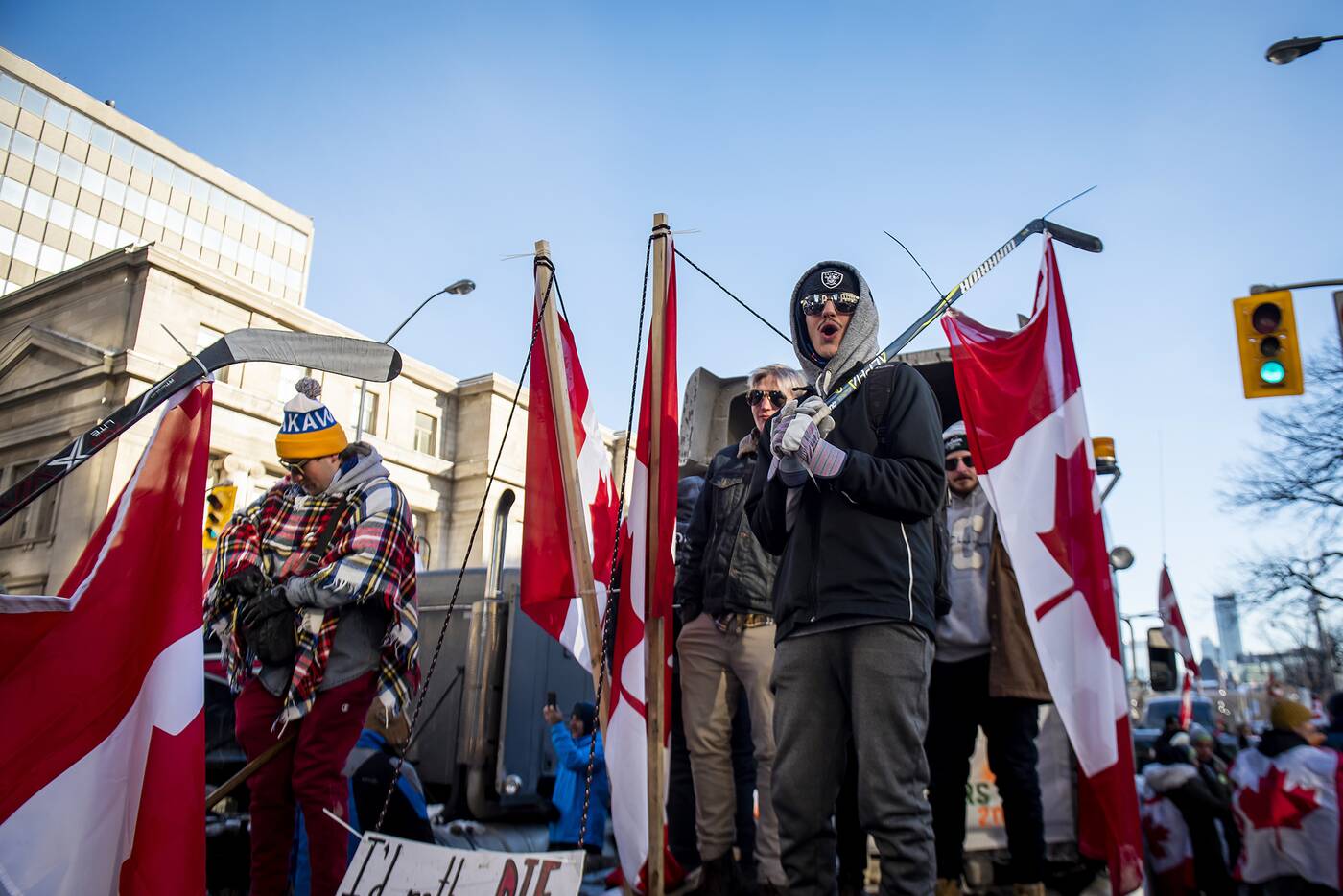 Protesters at Avenue and Bloor. Photo by Hector Vasquez.

She made it clear that she viewed this type of government overreach as eerily similar to the Soviet Union and post-socialist Russia, where she grew up before immigrating to Canada.

"It's not about vaccinations," Elena continued: "It's about the government mandating vaccinations."

Similarly, 65-year-old long-haul trucker, Daryosh, was quick to equate the vaccine mandates and lockdowns to the authoritarianism he endured while coming of age in Revolutionary Iran. 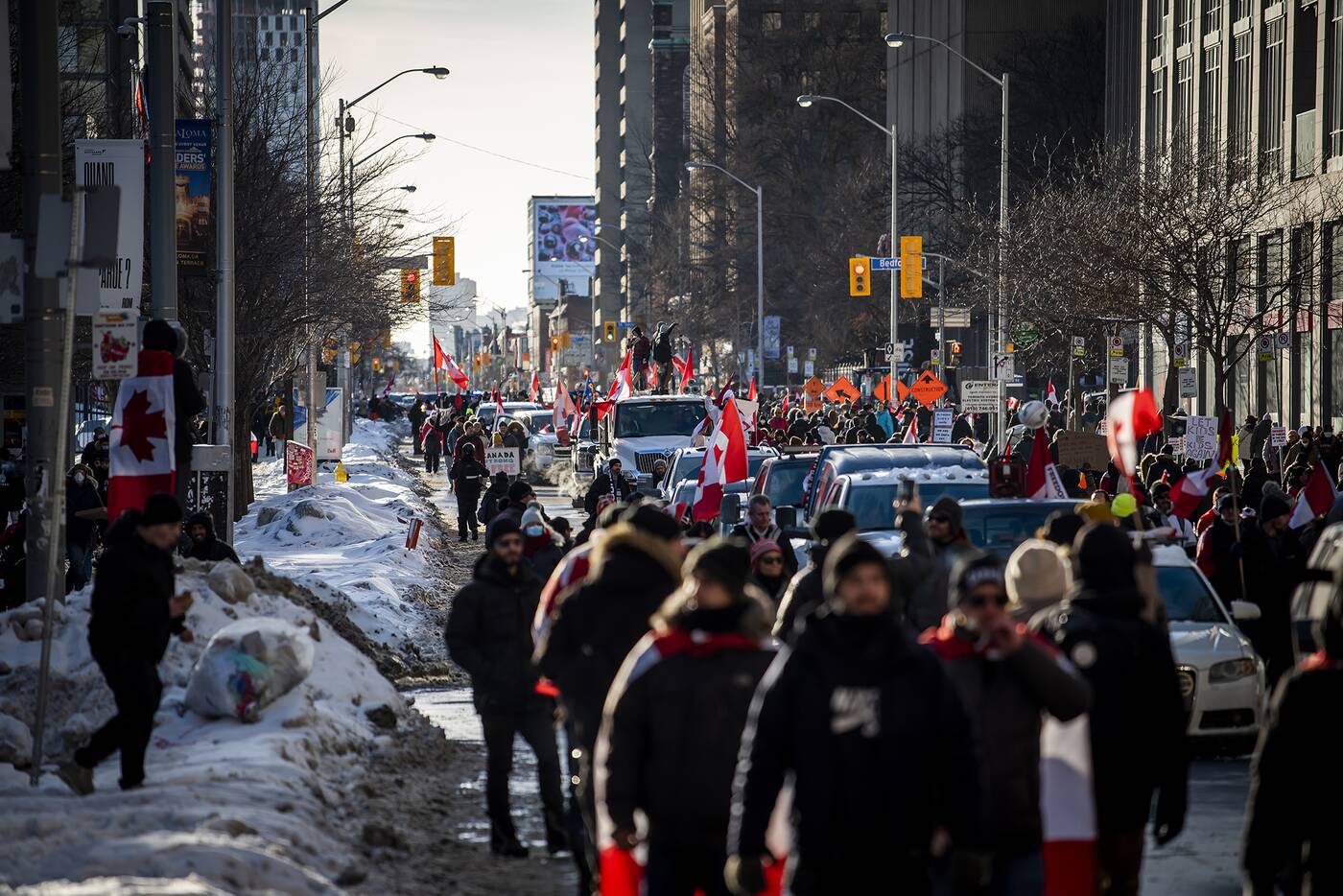 Listening in on the conversation was Daryosh's adult son, who added: "We came from a country that didn’t give us freedom. That's why we came here. So, today we're here to support freedom."

In the course of our conversation, Daryosh also referenced the fact that he was a Persian immigrant as a means to highlight what he viewed as another hypocrisy perpetrated by the current Canadian government, namely the perception that he and is fellow protesters are racist. 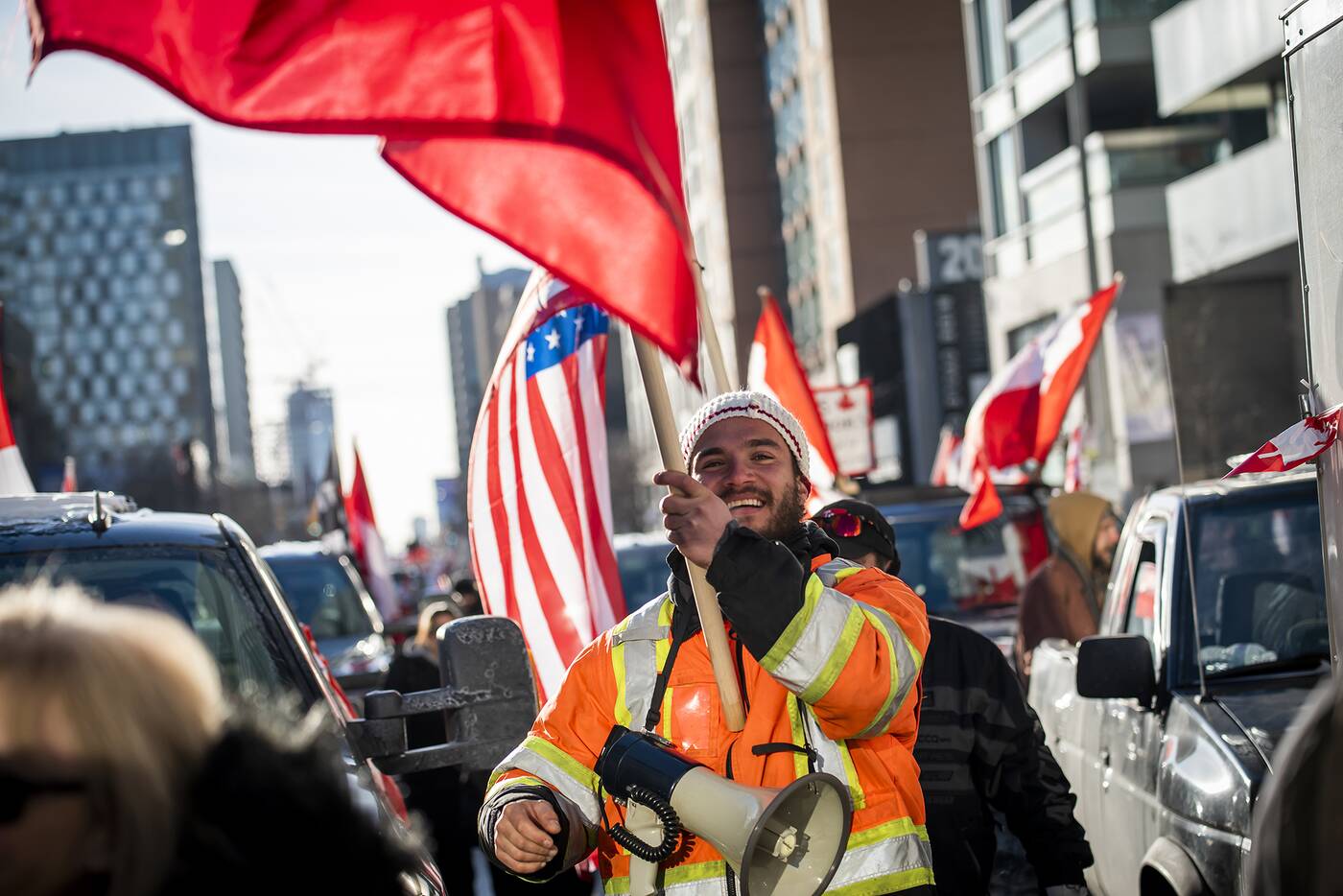 A protester near Avenue and Bloor on Saturday.

Citing the January 31 press brief in which Prime Minister Justin Trudeau repeatedly expressed disgust with what he characterized as hateful behaviour shown by the truckers and mixed protesters who showed up in Ottawa the previous weekend, Daryosh asked: "Am I a racist? Trudeau says there are racists here. Why is he saying that the people in the Ottawa or Toronto rally are racist?"

It bears mentioning that that while the Prime Minister reserved much of his press brief to describing instances of hateful behaviour, he did not explicitly say the trucker's movement was racist. 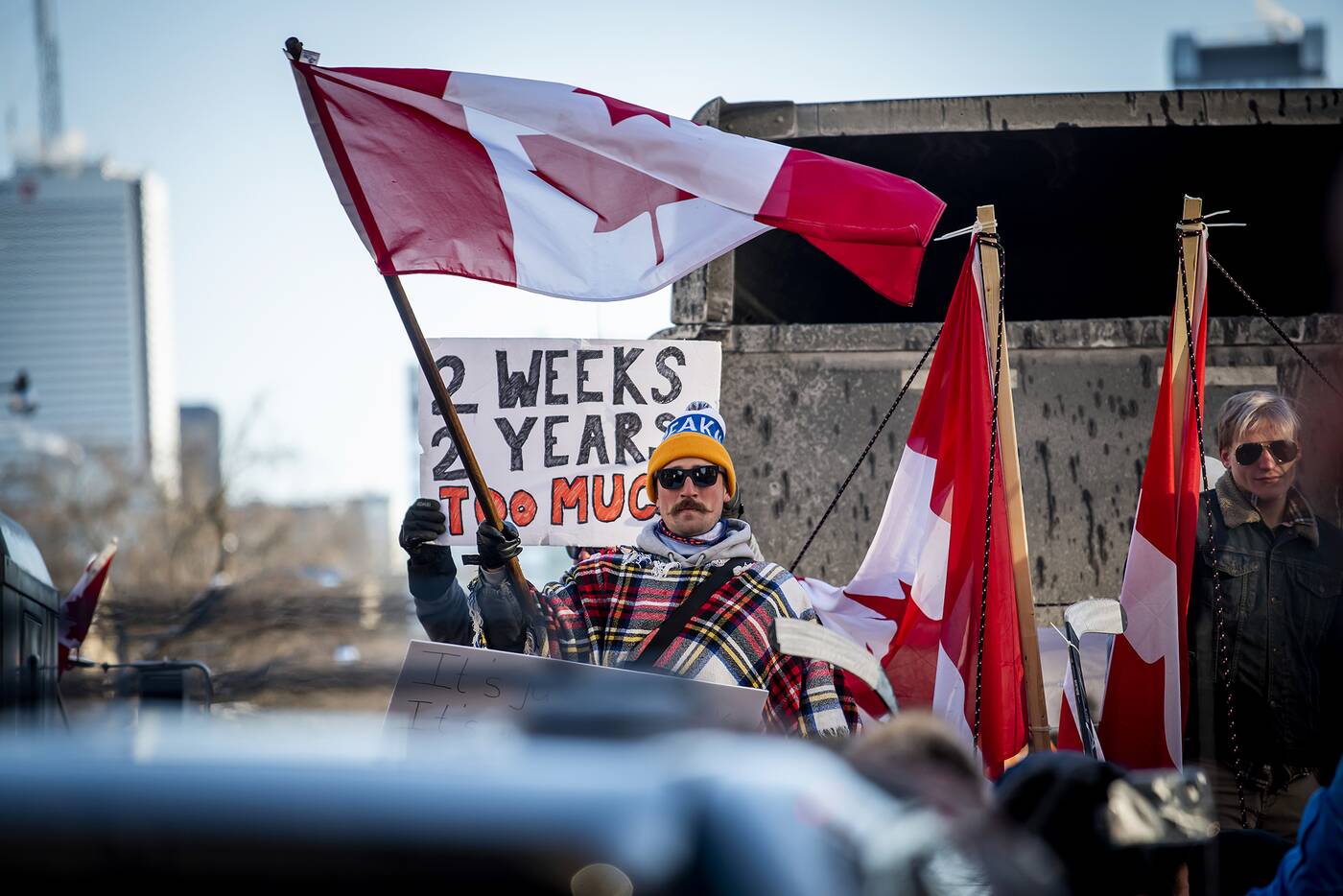 Protesters say they're tired of lockdowns. Photo by Hector Vasquez.

This distinction, however, was generally lost on my interviewees, many of whom took offence to what they believed was a widely reported perception that their cause was a racist one.

Daryosh's son, for example, pointed out somewhat exasperatedly that because of the actions of the Prime Minister, now even close friends thought that he and his dad belonged to a "racist" movement. 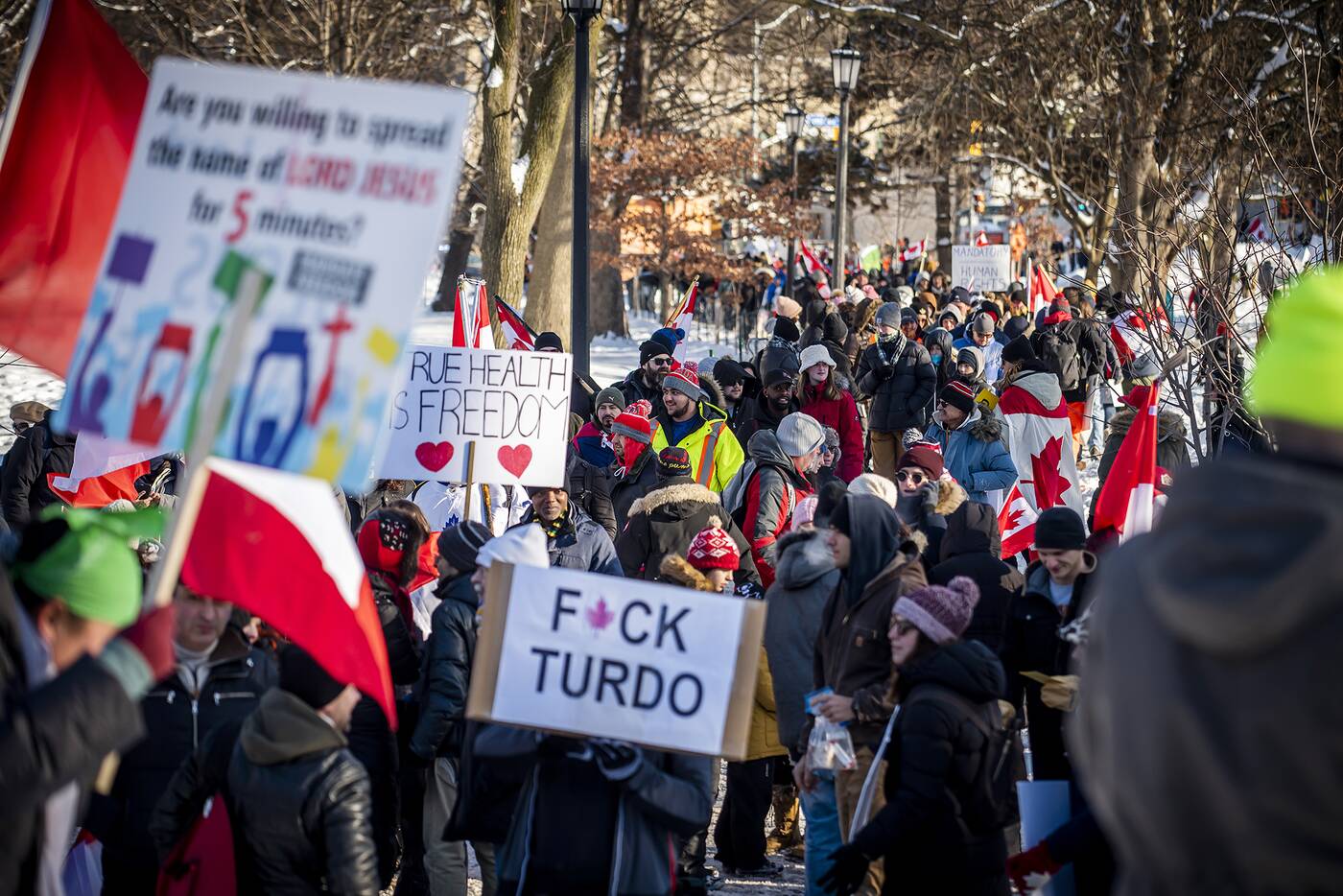 A crowd of protesters weaving through  Queen's Park on Saturday. Photo by Hector Vasquez.

Carson, an unemployed handyman who was among the first to show up that morning expressed a similar opinion, saying: "Mainstream media try to portray us as violent, arrogant and racist. We're not about that. We're here to peacefully protest and get our voices heard."

As I have learned from friends with years of experience in progressive movements, reportage on marches and demonstrations almost inevitably focuses on the "worst of the bunch” that is, the participants who turn violent, break windows, and project the worst possible image of the group as a whole. 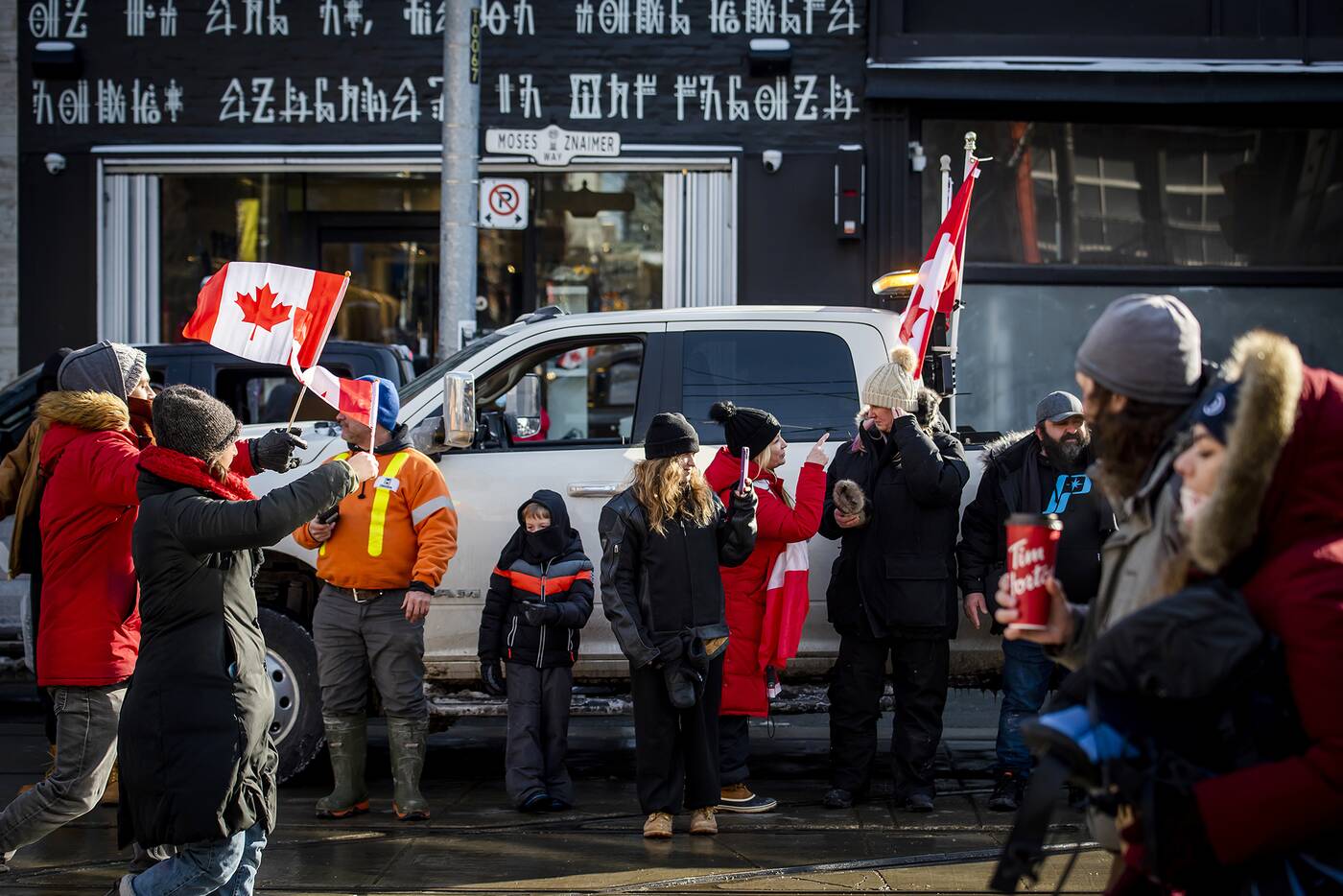 Kids and families were a common site at the protest.

This was a sentiment shared by many of the protesters I interviewed, and which Elena summarized best of all when she told me: "The idea that we are a racist movement is completely not true."

Gesturing towards her two teenaged children and her husband standing next to her, Elena went on: "My family represents four nationalities. I am Russian and Korean. My husband has British and Chinese heritage. We have the right to talk about this. And I think it was totally ungrounded what the Prime Minister said. It's appalling how he took one racist incident and related it to all of us." 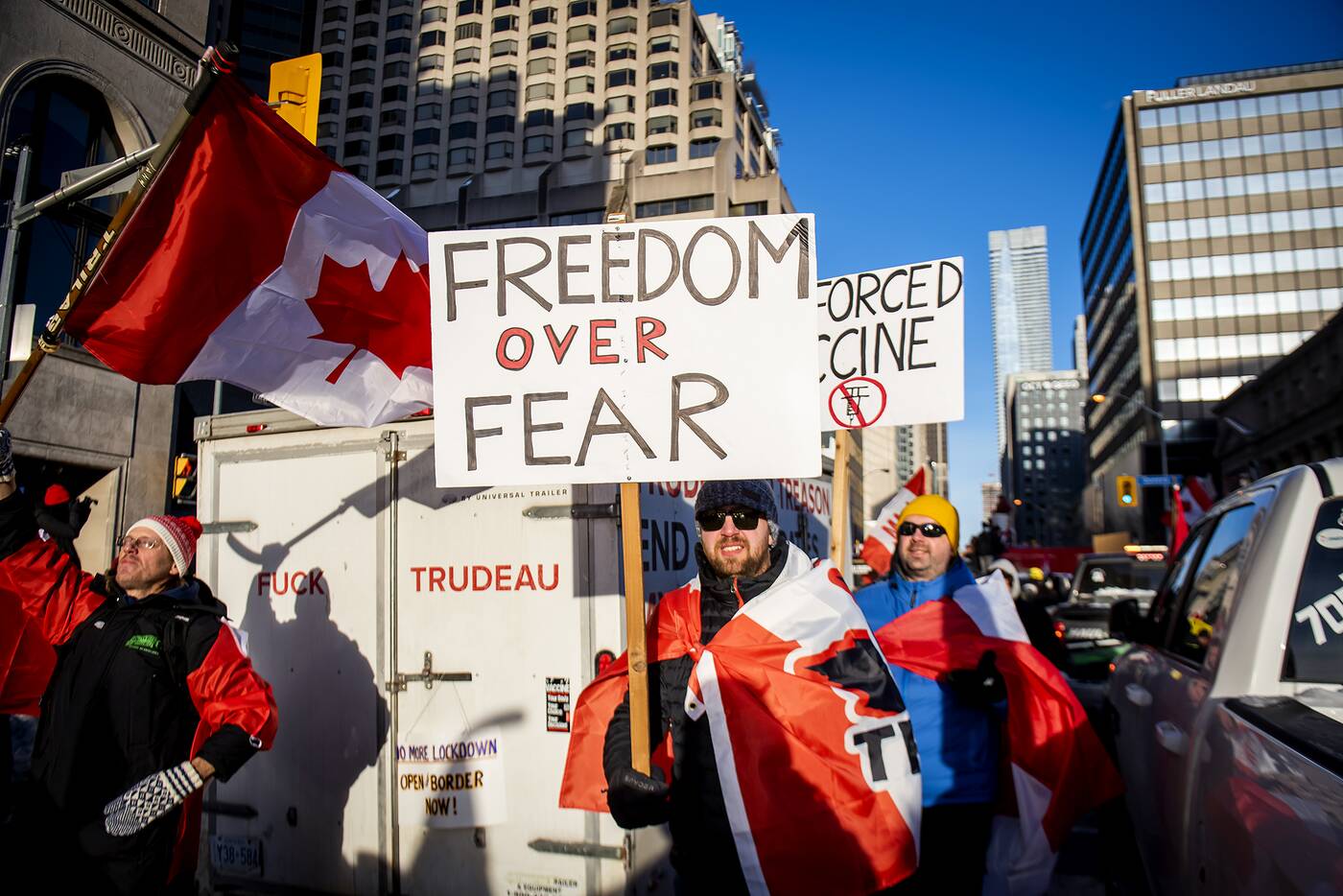 As vehicles large and small eventually began to pull out of the parking lot amid a din of blaring horns, fluttering Canadian flags, and jubilant "freedom, freedom" chants, the accusations of racism that had become attached to this particular movement presented a sharp contrast to the sizable number of participants who were not only visible minorities, but as the interviews would show, culturally quite diverse. 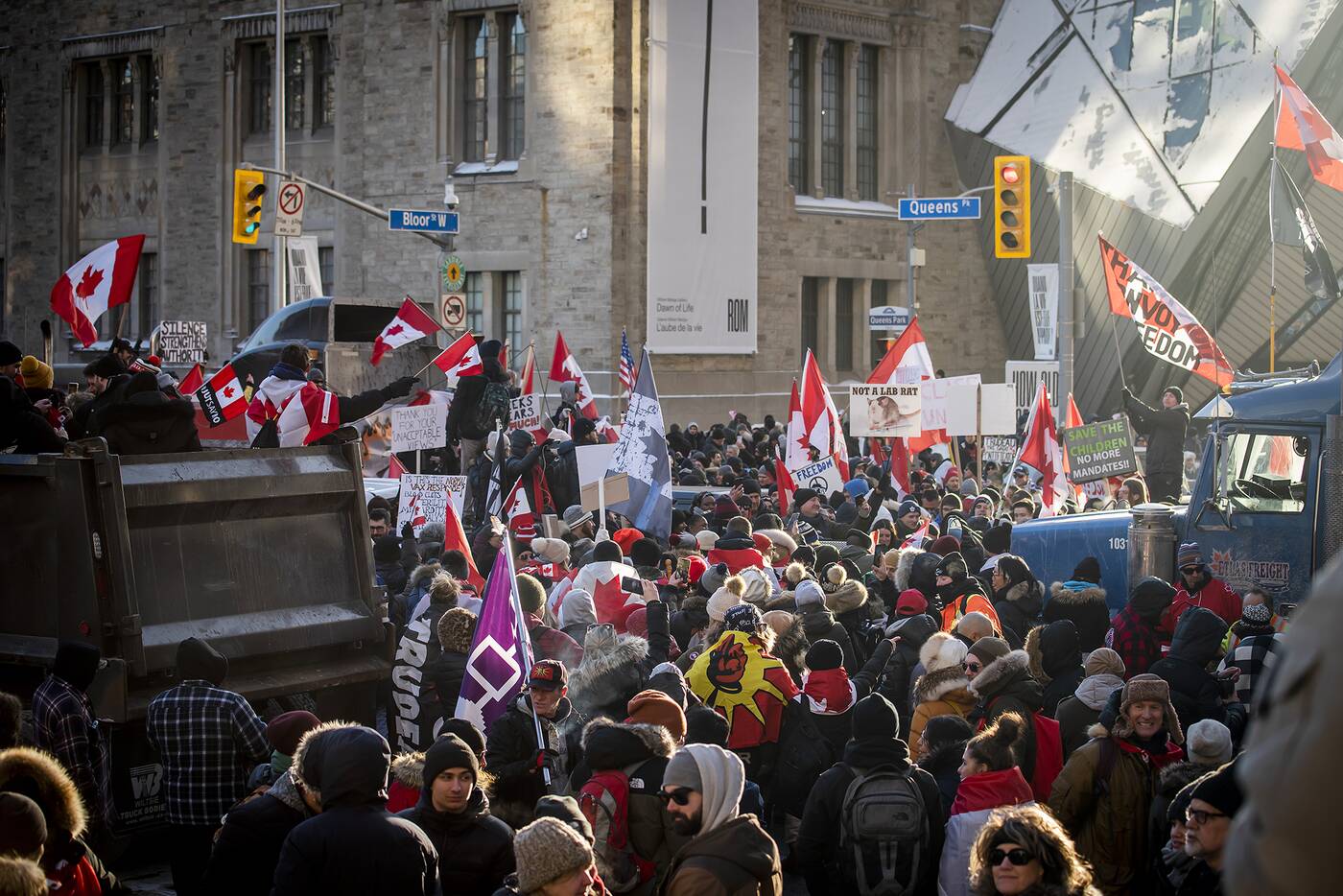 The intersection of Bloor and Queen's Park/Avenue Road was blocked with crowds and trucks for most of Saturday. Photo by Hector Vasquez.

Speaking to me in his native Spanish, one Cuban-Canadian man articulated this particular contradiction quite adeptly when he stated: "Have you seen racism? I don’t see it. I see all sorts of people. I see white people. I see Latinos. I see people from India. I see black people. I don't see any racism here. Only Trudeau does." 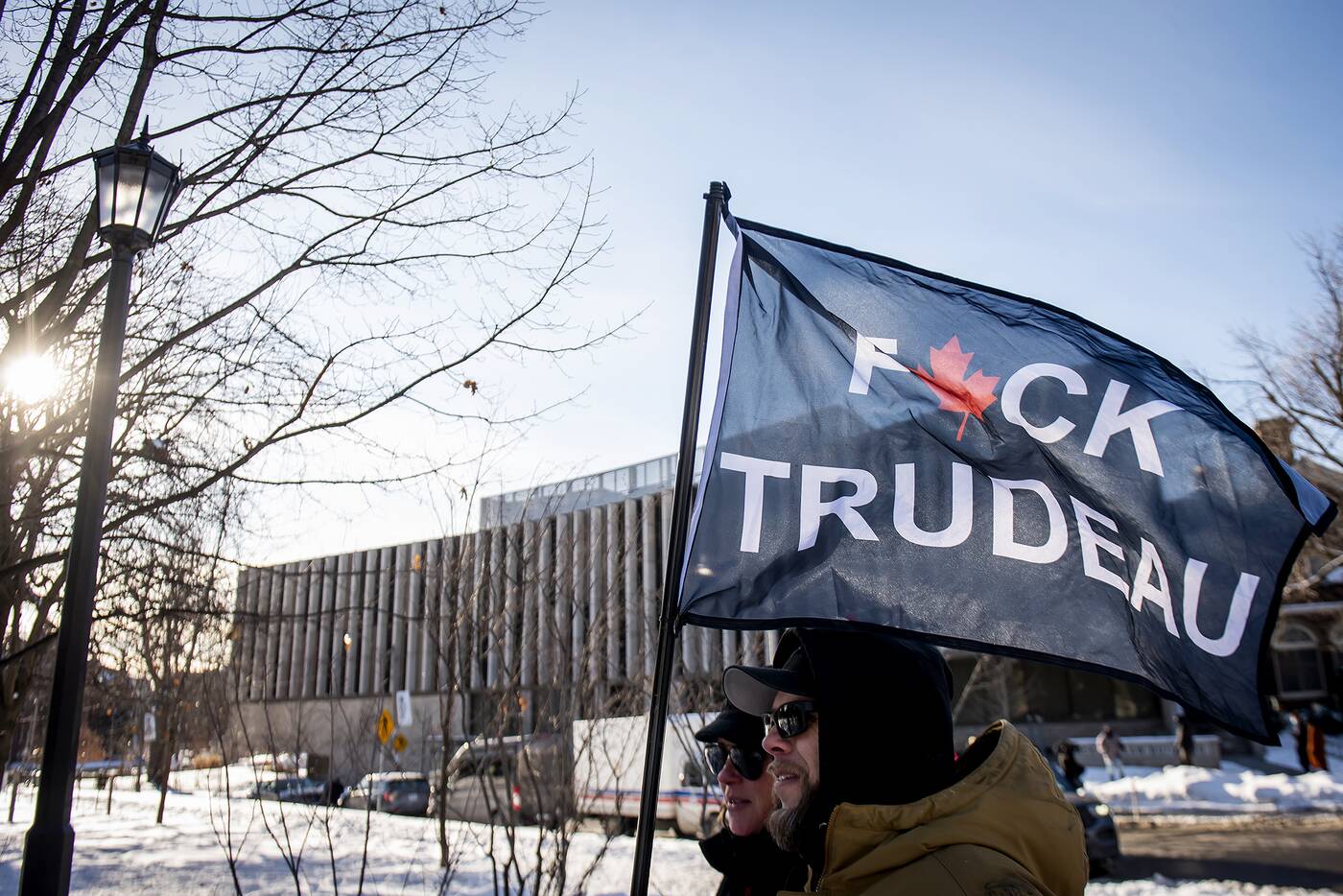 F**k Trudeau flags and signs were a common sighting at the Toronto rally. Photo by Hector Vasquez.

There was no question that the Toronto rally at Queen's Park later that day was a friendly, inclusive event with a large number protesters participating as families, even though many did not hesitate to fly "F**k Trudeau" flags and display strongly-worded commentary of the Prime Minister and his government.

However, swastikas (even used ironically as a critique what the bearers believed was the authoritarianism of the Canadian state), Confederate flags, and other hateful symbols visible in Ottawa, to my observation, were absent in Queen's Park.