Some newly-released studies assessing Canadians' mental health two years into the pandemic have found some very bleak, although fairly unsurprising results, with a huge number of respondents saying that they're still severely anxious and depressed.

One report from the Toronto-based Centre for Addiciton and Mental Health found that levels of anxiety, depression, and feelings of loneliness are just as high this far into the health crisis as they were when it first started, and way worse than mid-last year, when COVID-19 numbers were much lower and provinces were far less locked down.

Just over 25 per cent of participants cited moderate to severe anxiety (compared to 19 per cent in July 2021), while 24.1 per cent said they're feeling lonely (compated to 18.8 per cent in July) and 22.3 per cent would call themselves depressed (up 18.6 per cent last summer).

More people are also very afraid of catching the virus than they were previously now that Omicron is rampant.

More Canadians are feeling anxious, lonely and depressed than during last summer, and binge drinking remains high as the health crisis and lockdowns wear on. Chart from CAMH.

As the CAMH experts note, "after all of the ups and downs of the pandemic, in terms of the overall mental health of Canadians, in many ways we are right back to where we were two years ago." They also note more pessimism and less resilience among the population than earlier waves.

Women, young people between 18 and 39, and those working in customer-facing positions have appeared to be disporportionately impacted, and an entire quarter of those surveyed said they've needed help with their mental health in the last two years but have been unable to receive any in our healthcare system.

Meanwhile, a second survey on the topic from the Angus Reid Institute presented even more dire results, with only 12 per cent of people saying they felt happy in recent weeks, compared to 23 per cent who would say they're depressed.

In that survey, a staggering 36 per cent of Canadians said they're struggling with their mental health, while even more call themselves anxious (37 per cent), frustrated (40 per cent) or just plain tired of everything (a whopping 48 per cent). 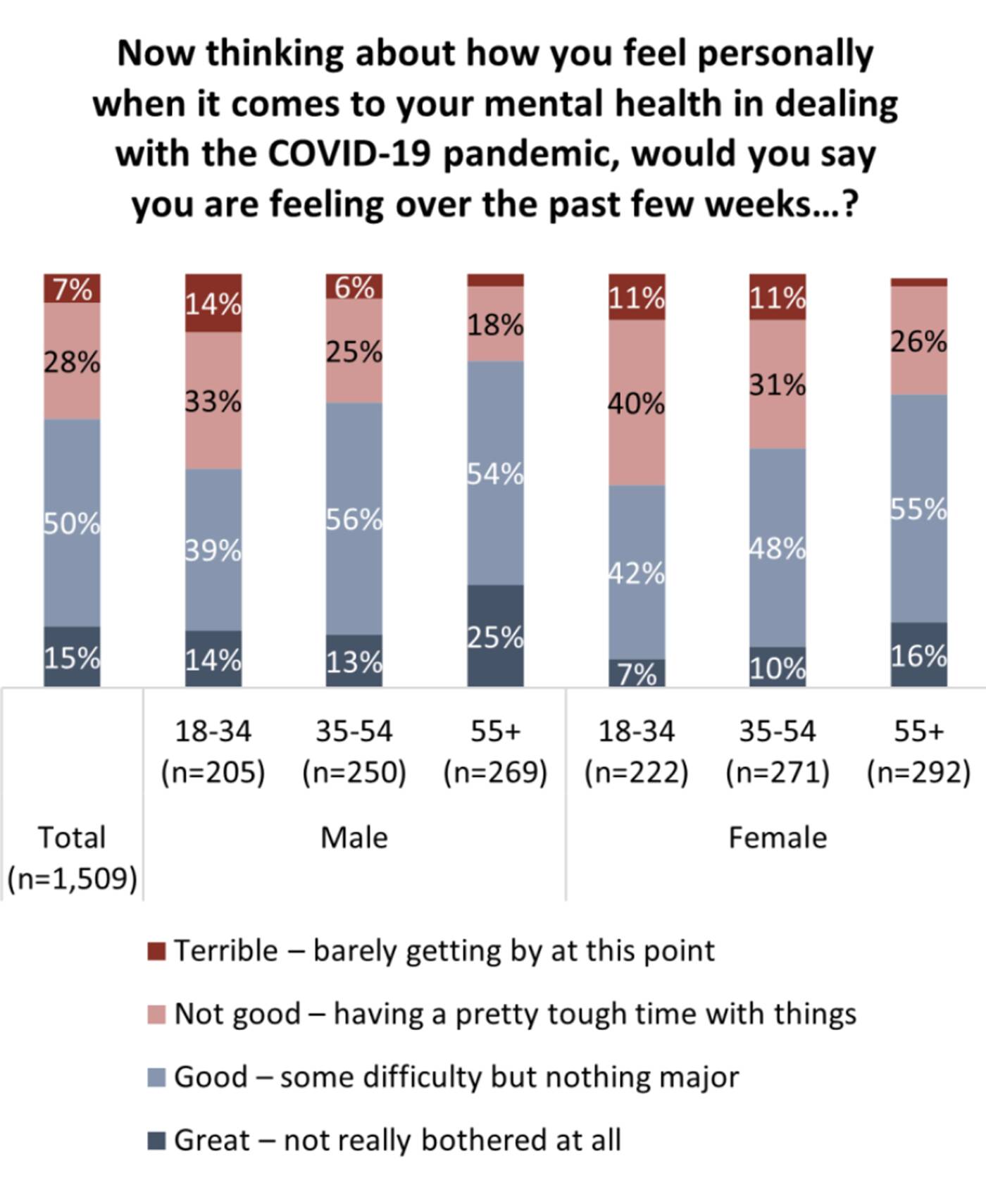 New studies reveal that Canadians are really not doing well mentally these days because of the health crisis. Chart from Angus Reid.

The number who reported themselves as "barely getting by" mentally these days (seven per cent) is more than double what it was measured to be at any point since October 2020, and nearly half of people say alcohol abuse has been a serious problem for them or someone they know lately.

People living in Ontario were found to be the most likely to suffer from pandemic-related mental health issues, perhaps due to our notoriously long stints of business closures and other stringent public health measures.