Two of Toronto's most-revered and mysterious photographers just dropped a head-spinning short film featuring four daredevils who, like themselves, have an appetite for aerial adventures — the kind of adventures that make most peoples' palms sweat with a single glimpse.

Tom Ryaboi, aka Toronto's own Roof Topper, and Ernest Emond, who stays off the grid, have been working since 2015 on their newly-published film 'The Air Up There.'

The piece features two local base jumpers (anonymous, but notorious) and two "urban free climbers" whose actions are accentuated on film by stunning shots of the city skyline from all sorts of perspectives; near, far, at sunrise, at sunset, when it's cold, when it's hot, when it's clear, when it's cloudy...

Toronto is actually breathtaking in gloomy weather when shot from above the cloud line.

At just two-minutes-and-45-seconds in length, the film is a must-see (that you can actually find time to see) for fans of this beautiful city. And viewers will see a side of Toronto that they've never seen before.

"We wanted to really connect the city through the visuals, so we thought about how we can tell the story in a fluid way from one scene to the next," said Ryaboi, an award-winning photographer and filmmaker, to blogTO on Tuesday.

"This city has so many great angles, and it can look so different from one day to the next. We really left so much on the cutting room floor."

But it's not the stunning shots of downtown Toronto from on high that are the focus here: Rather, Ryaboi shifts focus to the human subjects of the film when asked about his latest work.

"I think the goal of any storyteller is to make people feel something when they see their work. We are no different, we wanted to show the city in a people have never seen it before, and maybe, appreciate," he tells blogTO.

"Ultimately we'd like to make a lengthier narrative based piece. As exhilarating as the visuals are, we think the stories behind the people in the film are much more interesting."

These guys are nuts, been following their adventures for years.

The Air Up There https://t.co/BNl4SsCDE0

He's not wrong — the four brave souls featured in the film are interesting on their own. They do things most people would never dream of doing; The kind of things some people see in their nightmares.

Two of the subjects jump from incredibly high buildings with parachutes for fun. The other two scale industrial cranes to capture one-of-a-kind images. Also for fun.

What they all have in common — alongside Ryaboi and Emond themselves — is a penchant for going up into the sky with their own two hands and feet.

To put it simply, these dudes are all badass, and the fact that they do none of these things for clout makes this assertion all the more accurate.

"They aren't doing this for likes and mentions," says Ryaboi of his anonymous subjects. "Most of them don't use social media, and their motivations couldn't be further from these."

‘The air up there’ will be out tomorrow November 23.

"While climbing, I always feel both terrified and exhilarated. The challenge is finding a balance between those extremes," says one of the film's urban climbers, a university student who goes by Edward.

"On the more challenging climbs I sometimes talk to myself out loud, asking myself how I could be so reckless with my life. Overcoming this anxiety is part of the experience for me."

The other climber, Brad, is a little more zen about scaling cranes and risking his life.

"You tap into this flow state, and your whole body delivers hand after hand, foot after foot," he says. "A thought will cross your mind occasionally, but I'll simply let it pass."

Ryaboi and Emond say that it was "refreshing to film individuals with a very different motive" in an "age of obsession with 'likes,' 'shares,' and 'mentions.'"

"When our lives are so preoccupied with the act of reflection and the optics of other people's experiences, living in the moment has become almost ironic. It's wildly romanticized on social media, but so few people actually practice it," say the filmmakers. 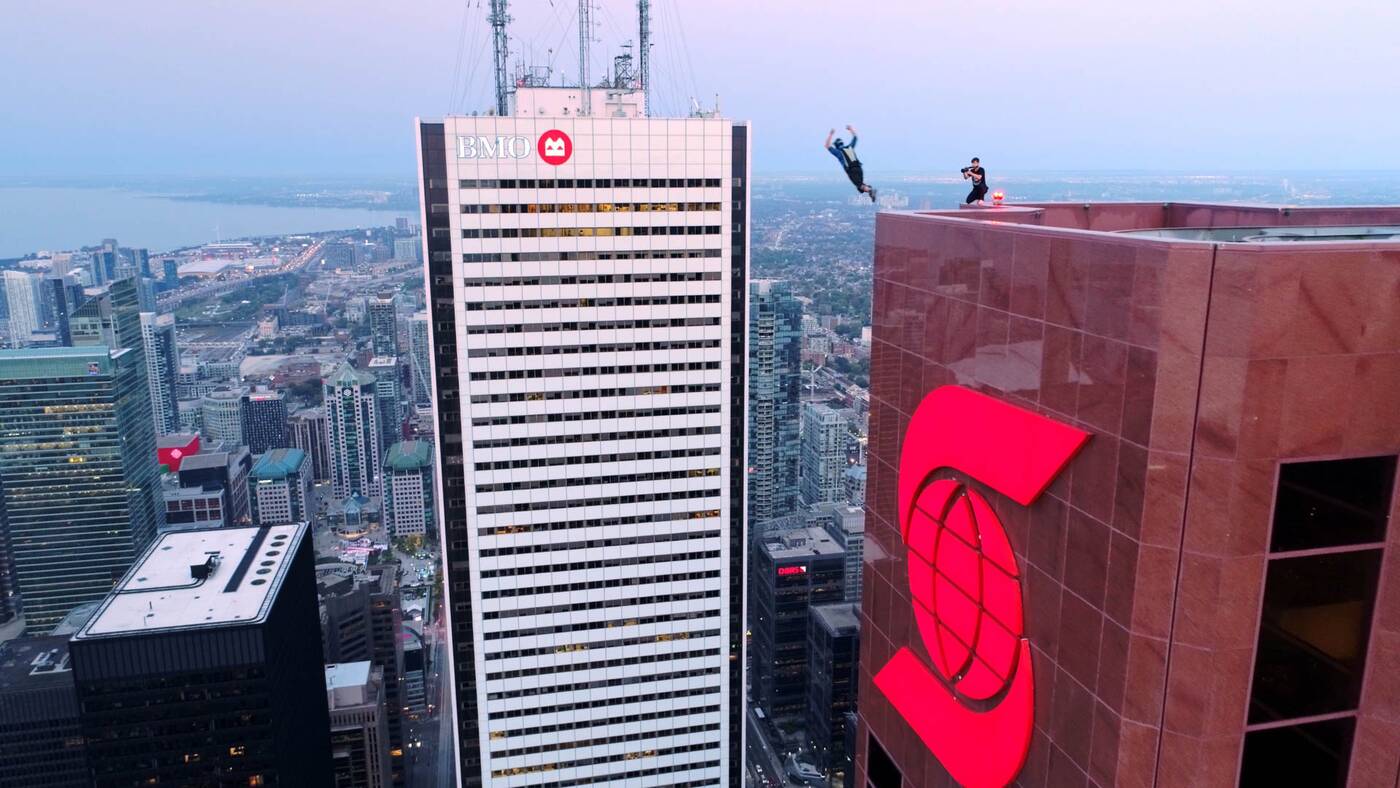 While police may condemn the actions of urban base jumpers, most Toronto residents can't help but be impressed by their boldness and bravery. Image via The Air Up There.

The piece was also inspired by the city itself and the idea of what urban environments mean to humans both now and in the future.

"With The Air Up There we really wanted to explore the human relationship with the city, both physically and metaphysically. It's predicted that 70 per cent percent of the world's population will reside in cities by 2040," said Ryaboi and Emonds in an artistic statement about their film.

"How did we make this transition so quickly after having spent tens of thousands of years living in rural and even nomadic communities? We thought about what it means to be a product of the modern city, and the effect this way of living has on our nature...

"Ultimately, we wonder if this monumental change in habitat has resulted in us losing something along the way, or if it's still in us, waiting to be awakened."