A car flipped and destroyed in the "fake homecoming" riot at McMaster University belonged to a first-year student who saved for years to buy it.

Thousands of students gathered on the streets last weekend in an unsanctioned homecoming in Hamilton.

The crowd left a wake of destruction and damage in the event. In a widely circulated video, a white Mazda is flipped as people shout 'no,' but the mob continues, and then several people jump on the overturned car on Oct. 2.

The car belonged to first-year student Ashley Hogan, who tells blogTO she saved for four years, since about Grade 10, working part time at Dairy Queen to buy it.

Hogan tells blogTO she left Hamilton early that day for a regatta at Trent University — she didn't know the party would be on her street until later that morning.

Later, looking at posts on Snapchat she saw a car being damaged. Then she noticed a  pink license plate cover in the corner of the photo.

She was just about to race, and not wanting to let her team down, she stayed at the event. It wasn't until she got home, after midnight, that she learned her car had been flipped and pretty much destroyed. She has insurance but it won't cover the deductible and contents of her vehicle.

Luckily, a friend, Julie Martin, started a Gofundme to help Hogan. The fundraiser brought in more than $10,000 in about four days and many students offered support. 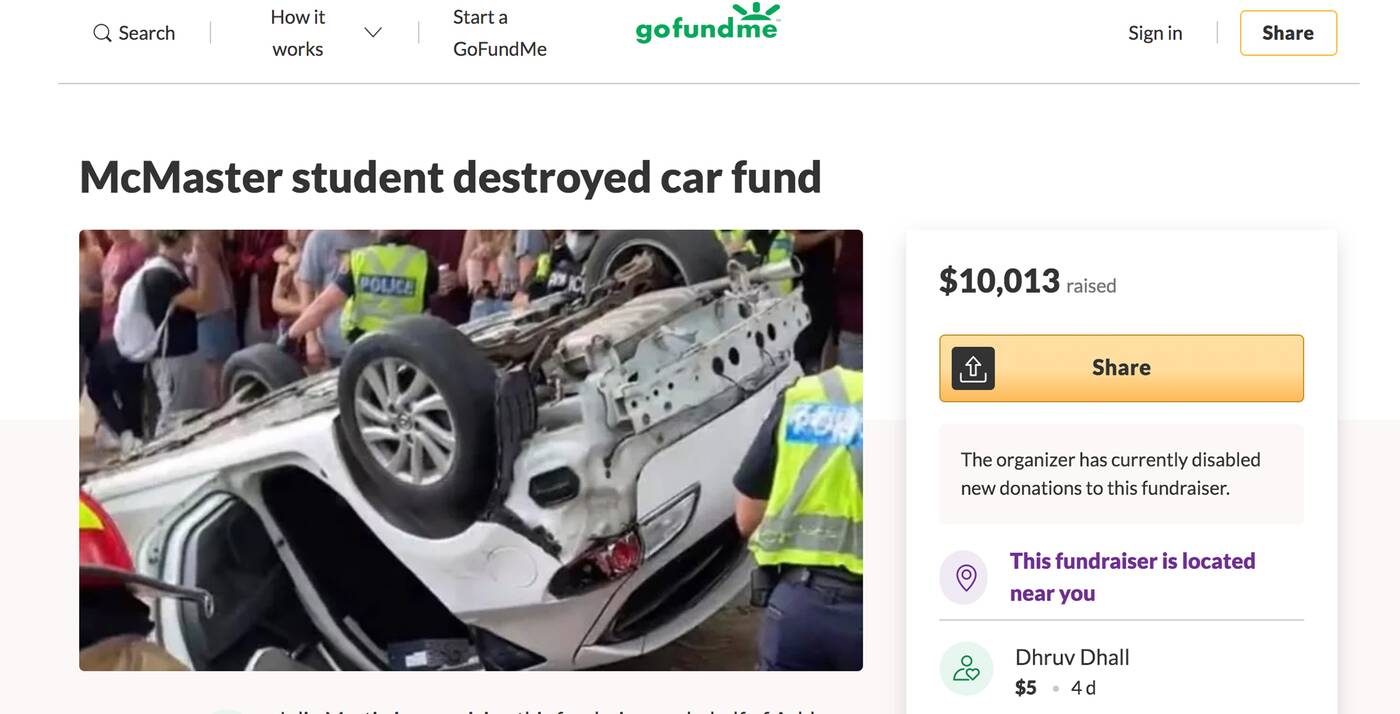 Ashley Hogan's friend organized a fundraiser to cover costs of the car damaged in the riot.

"My heart goes out to you, saving up for a car is a big deal and this disrespect shouldn't be [taken] lightly," one person wrote. "I hope this doesn't change your view of the McMaster community, you have thousands behind you against a rotten few."

"We should work towards having fun and partying without destroying some poor girl's personal property," said another person.

Another wrote: "This isn't the McMaster we know and love."

Hogan doesn't think the car can be repaired.

"The insurance company hasn't told us yet, but it's 365, like all-around broken, so I don't think they're going to be fixing it."

Martin closed donations to the fundraiser after topping $10,000, saying how happy she was with the support.

"I know that many people who donated are also students at Mac which is very heartwarming," she wrote. "Blown away by the response that we saw in less than 24 hours! It is amazing to see the community coming together."

Hamilton Police reviewed video footage investigating the damage to the care and street signs. They arrested a 19-year-old Wilfrid Laurier student from Burlington in connection with the incident. They also charged others with Liquor Licence Act Offences.

Hamilton Police continue to investigate after a car was overturned & street signs damaged after a large unsanctioned gathering near Dalewood & Westwood in #HamOnt. Investigators are appealing for assistance in identifying those responsible. Read More: https://t.co/YGC6v7opvL

Police estimated 5,000 people crowded into the streets, which had to be closed to ensure the safety of those attending the gathering and those members of the public in the vicinity of the area.

Glass bottles, cans and other objects were thrown at officers and one police vehicle was damaged as a result.

Police said there were no serious reported injuries, but several individuals were treated for injuries consistent with falling and excessive alcohol consumption.

Hogan says she is now looking for another used car but finds that they are a bit more expensive than they were about a year ago. Even though she felt unsure about doing a Gofundme and only agreed at the urging of friends, she is happy with the support.

"Everyone came together as a community, supported me, and I was really shocked and taken back by that," Hogan says. "I'm just thankful for whoever donated to me and anybody who reached out to me with kind messages."