If you feel like you've been waiting for the Eglinton Crosstown LRT for ages, you're not alone.

It's late, it's over budget, and people and angry. But if you can look at things purely through the lens of progress and better transit for Toronto, the future Line 5's planned 2022 opening is a pretty exciting moment in the city's history.

Despite a price tag in the billions and a decade of construction, the magnitude of work involved to build Toronto's next transit line is staggering.

The last bits of the line's 19 kilometres of track are now being installed, including through a 10.4-kilometre stretch that runs entirely underground in dedicated tunnels.

Once all is said and done, we'll have 25 new stops and stations along Eglinton Avenue from Mount Dennis in the west and Kennedy Station in the east.

Over the last few months, east-end residents have grown familiar with the line's light rail vehicles, or LRVs, plying Eglinton as they do test runs between Brentcliffe and Kennedy. 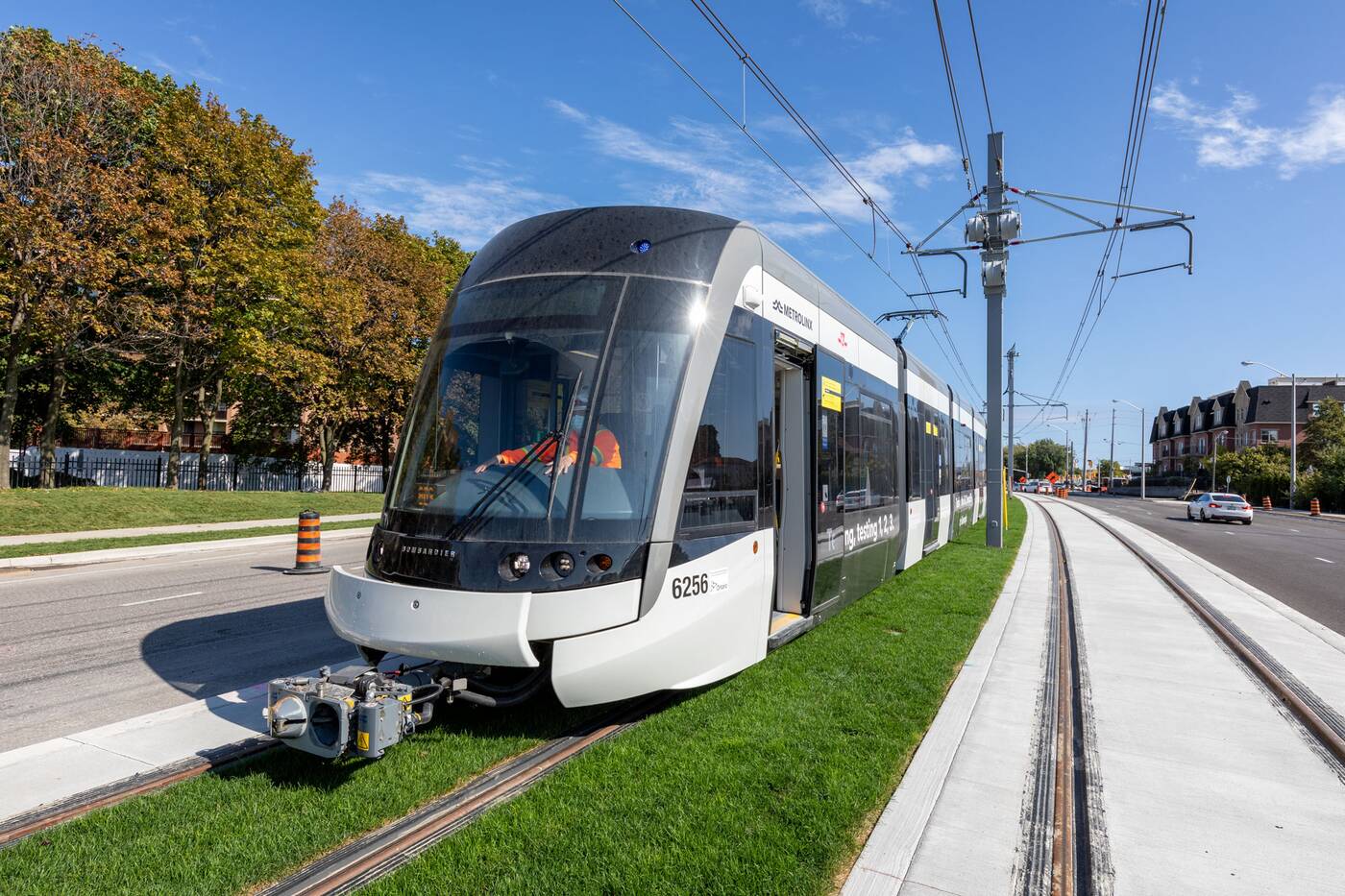 An LRV along a stretch of green trackbed in Scarborough.

Toronto media got a first glimpse inside the vehicles and a chance to go on a brief ride back in August, and this week, another preview took news cameras on a much more in-depth trip along the eastern stretch of the Crosstown.

The media tour started at Science Centre Station, an underground station functioning much like a subway, flanked on both sides by surface sections. 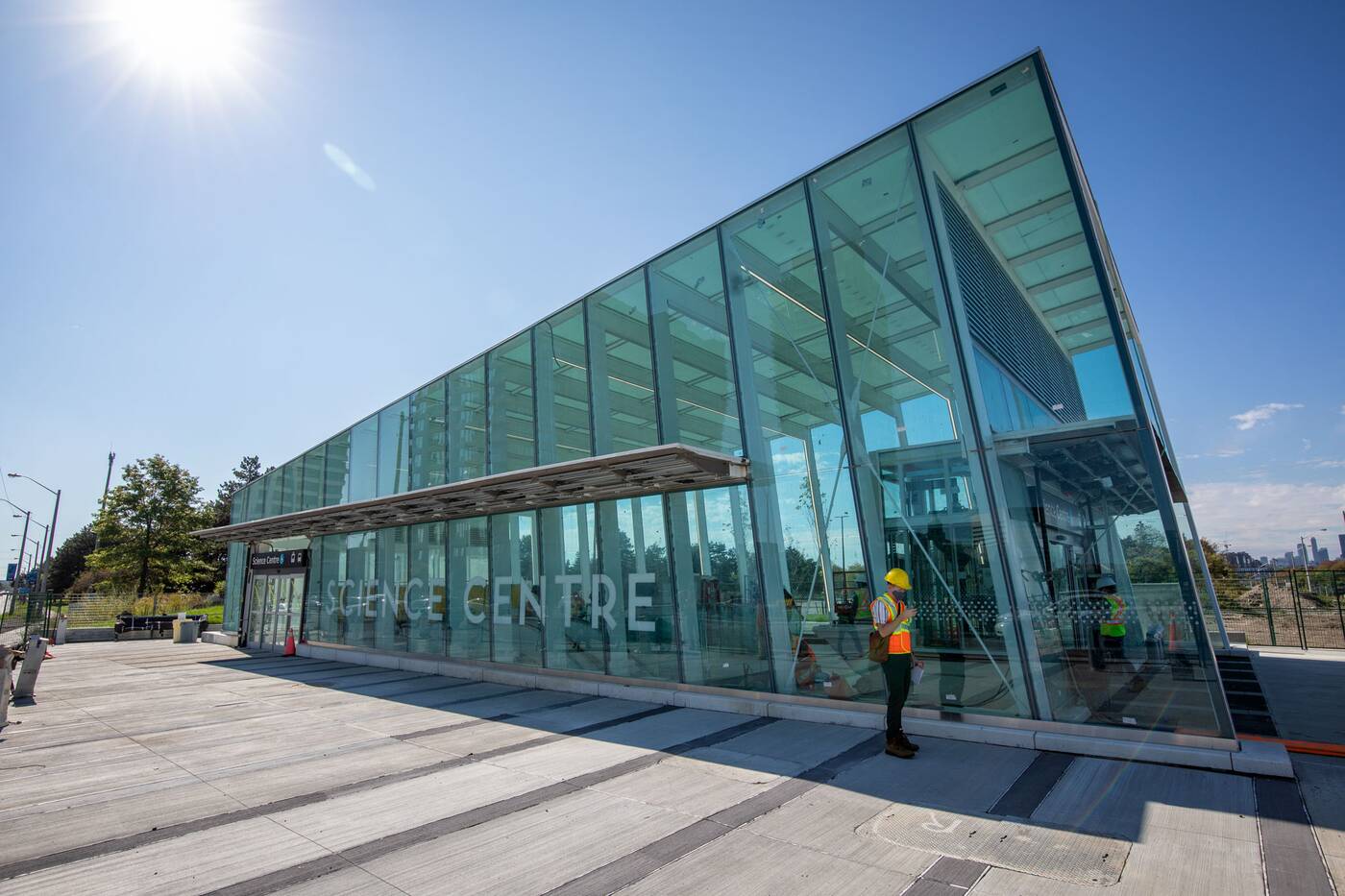 Work is about 90 per cent complete at this site, and it's clear from even a quick walkthrough that there's not much left to do before construction wraps up.

Phil Verster, President & CEO of Metrolinx, said that the tour was a way for Toronto to "get a sense of how vehicle testing and the Science Centre station are coming along." 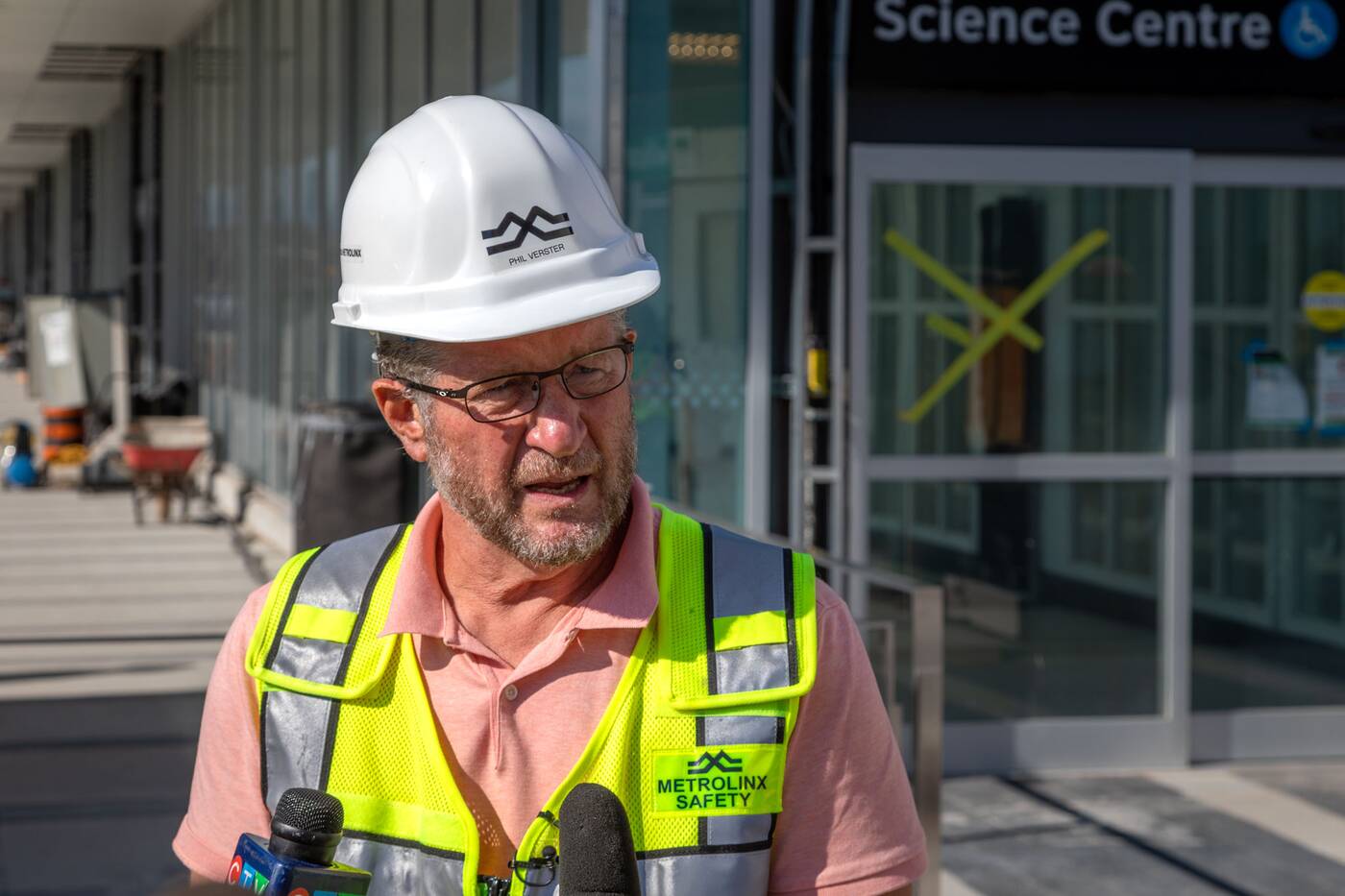 Phil Verster, President & CEO of Metrolinx, spoke with media before the tour.

Science Centre Station offers exits at opposite corners of the Don Mills Road and Eglinton Avenue East intersection. The main entrance sits at the southwest corner, an impressive angled jewel box design that makes for a grand entrance or exit from the station. 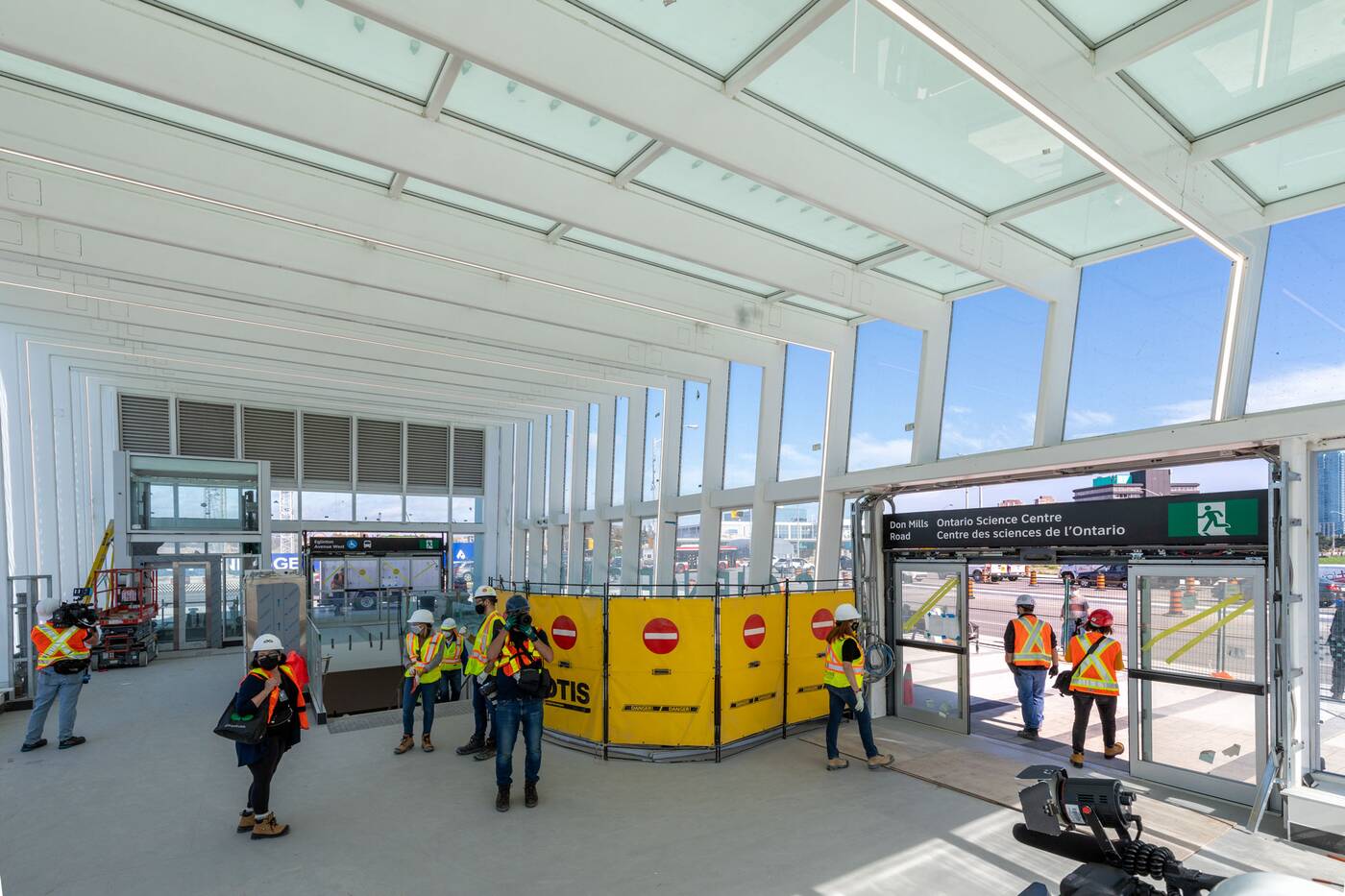 Inside of the Science Centre Station main entrance at Don Mills and Eglinton.

At the northeast corner, a second building stretches from Don Mills in the west to Gervais Drive in the east, which features seven bus bays for connections to surface routes. 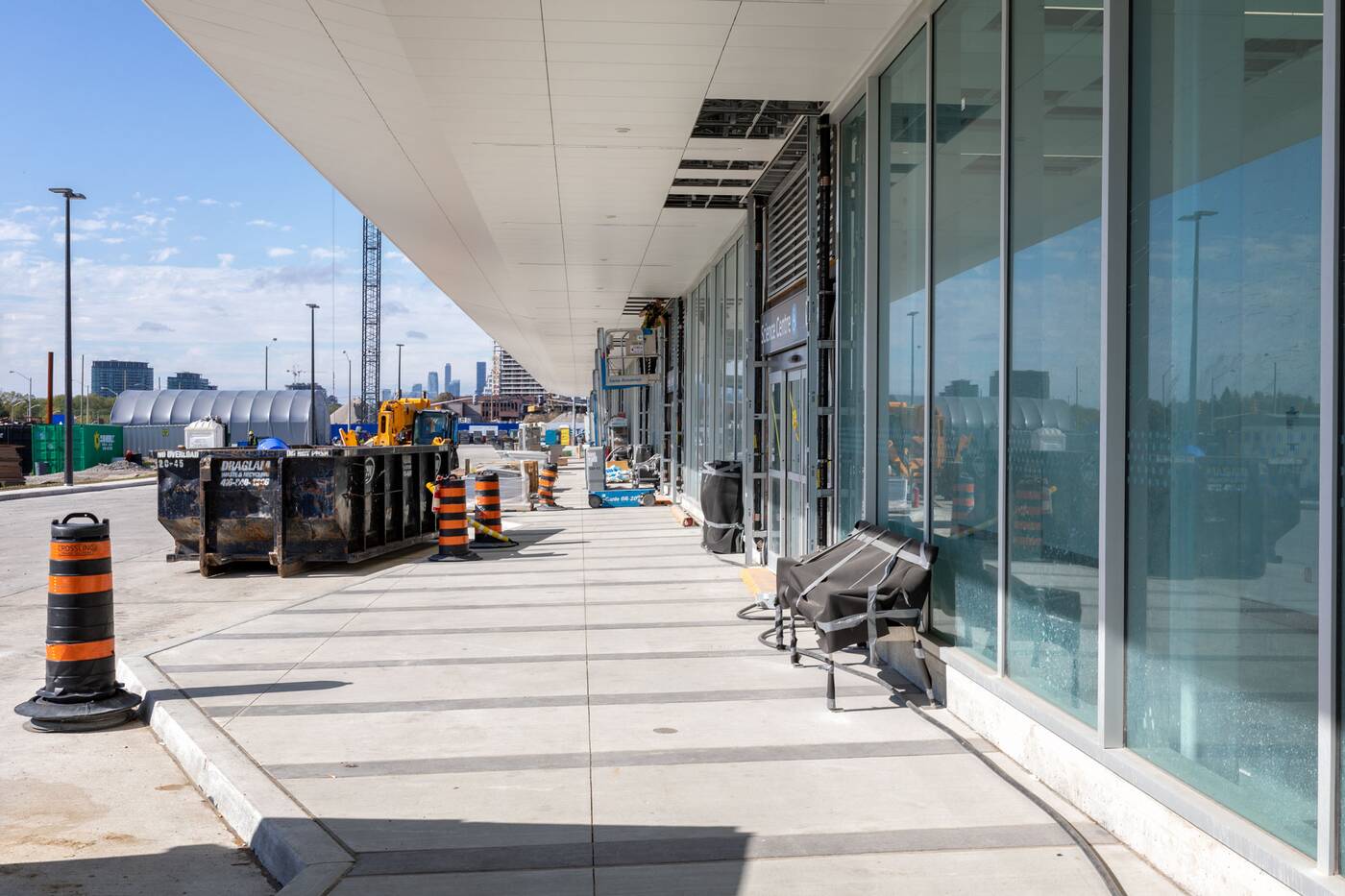 Bus bays at Science Centre Station, supporting some of the 54 surface routes that will connect with the new line.

Below ground, riders pay their fares in a cavernous mezzanine level before descending one more floor to the platform below. Greeting commuters is a vivid installation from artist Sarah Morris, known as Total Lunar Eclipse, gracing the subway tile finishes throughout the station. 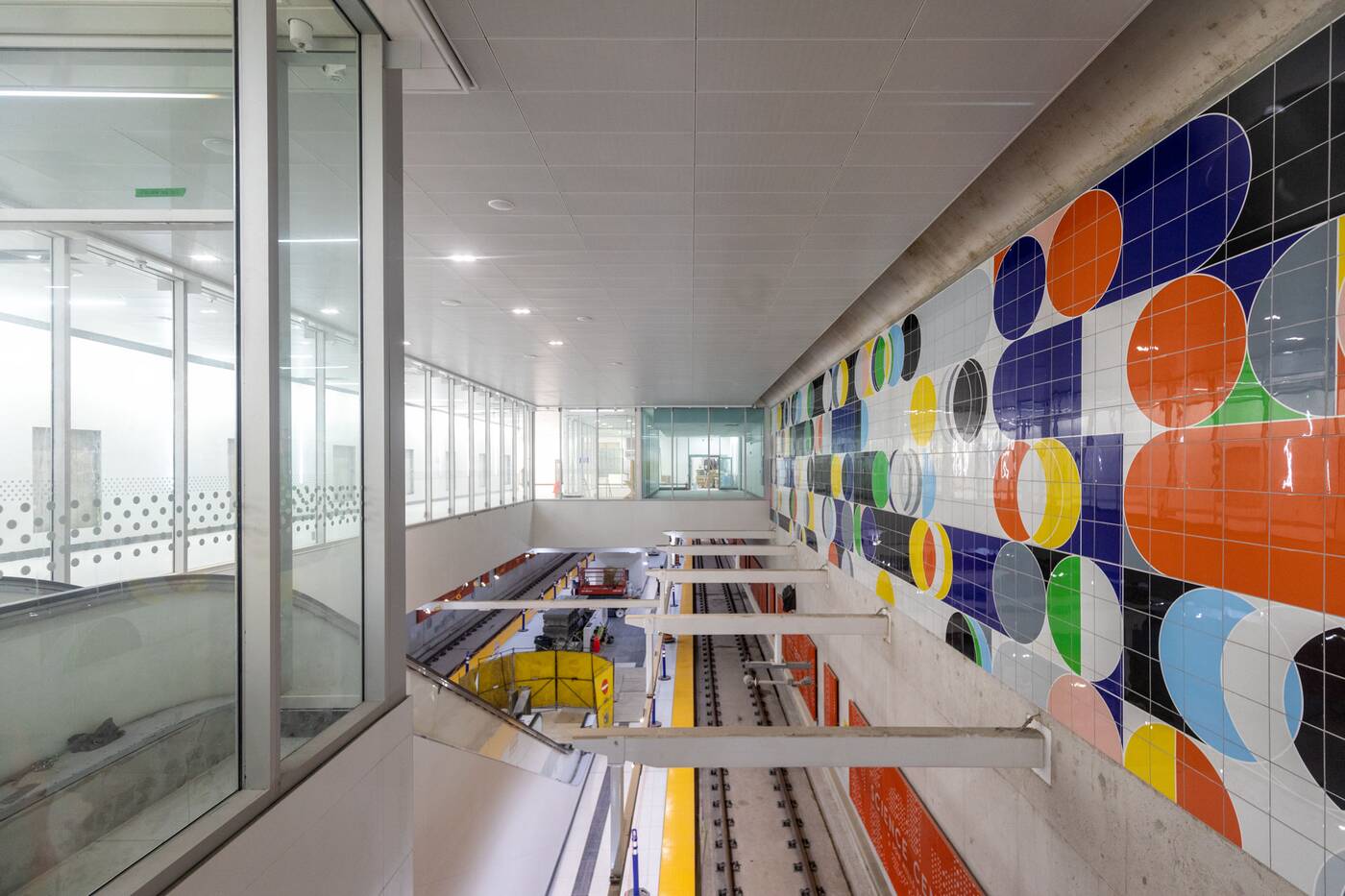 This installation was procured through Metrolinx's Integrated Art Program, which is also bringing visual touches to the line's stations at Mount Dennis, Caledonia, Cedarvale, Eglinton and Kennedy. 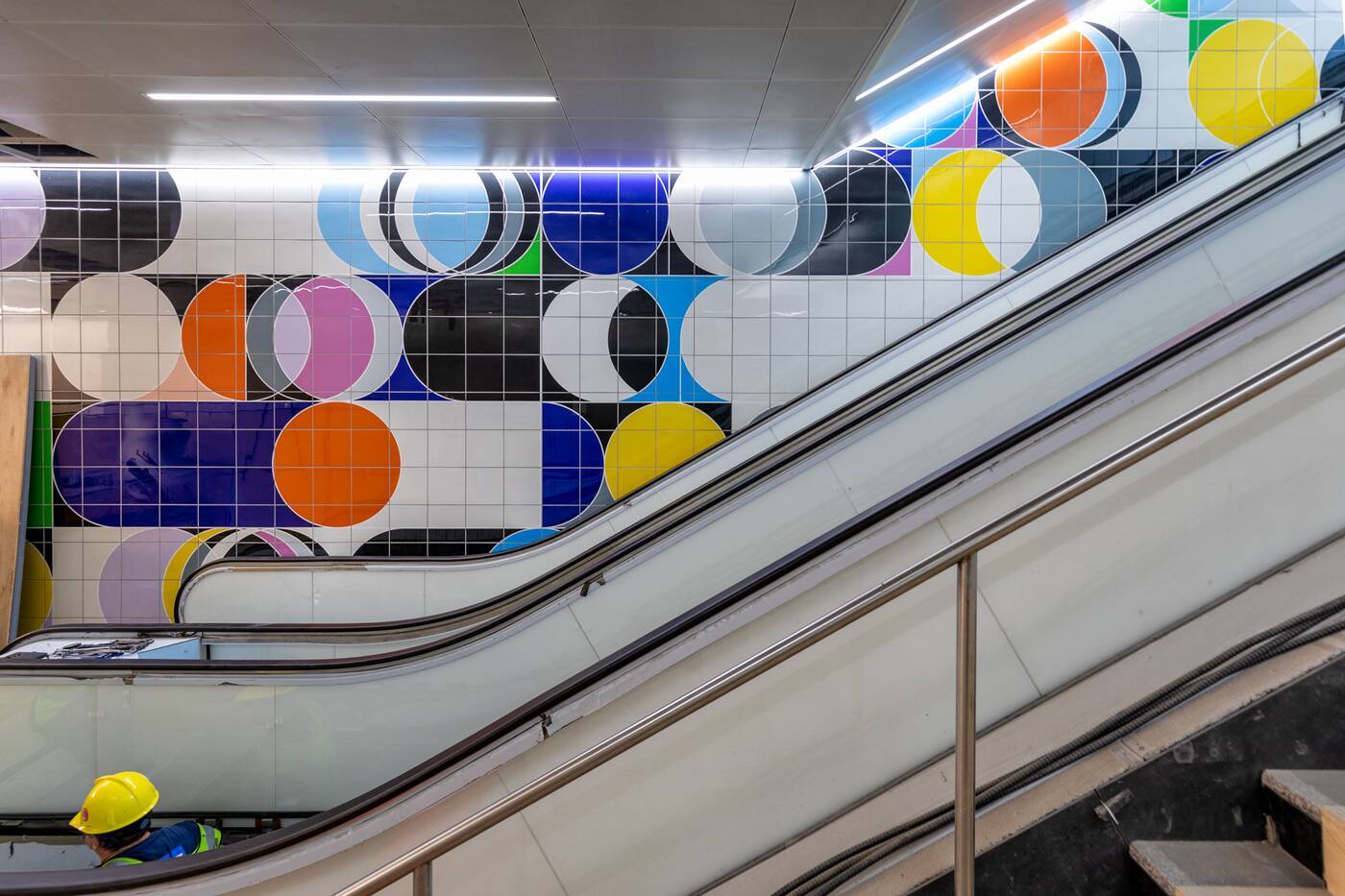 Down at platform level, it feels distinctly subway-esque, the yellow raised edge indicators, platform wall signs, and central platform with escalators all giving off the atmosphere of a higher-capacity line. 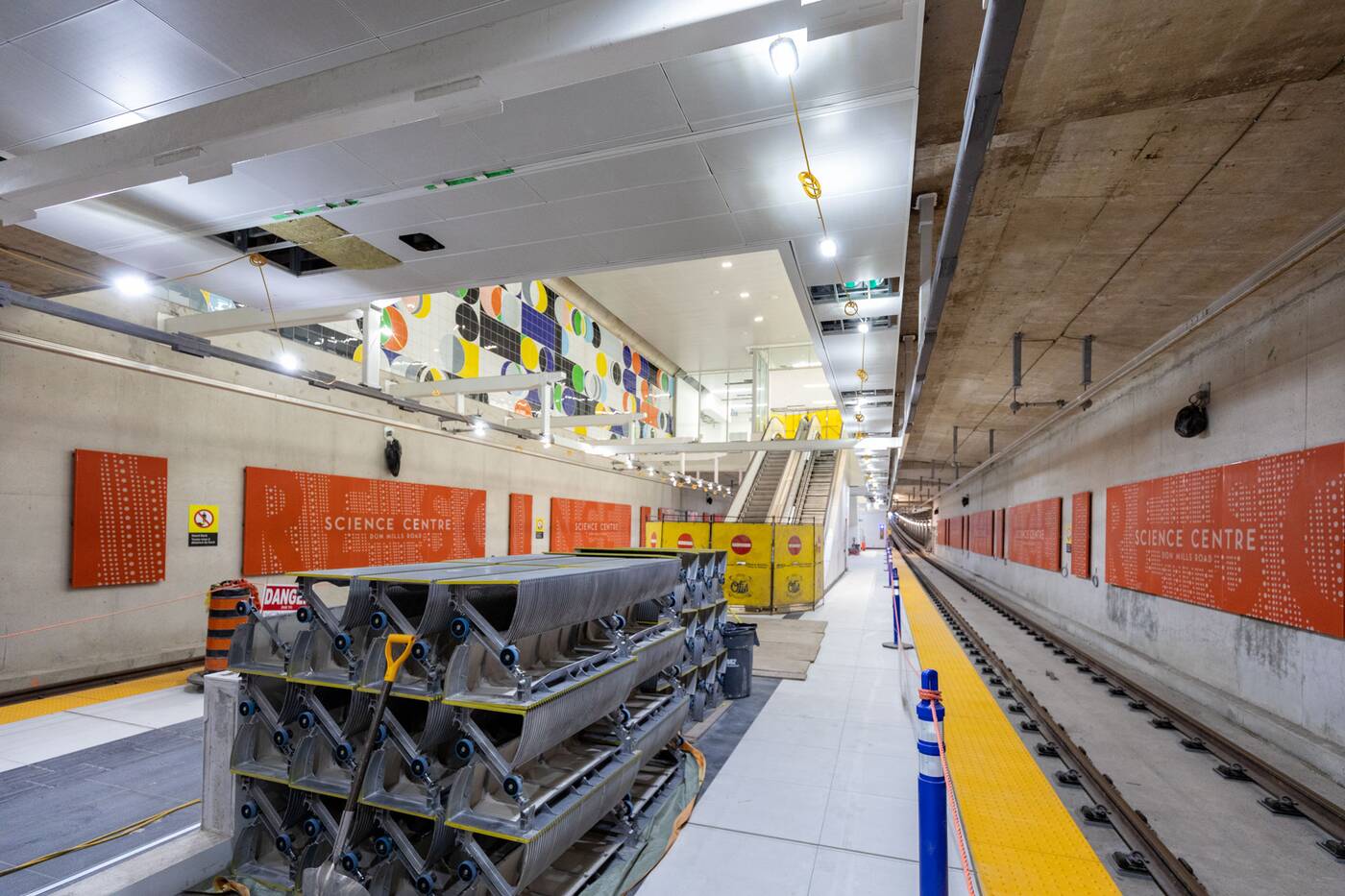 Diego Ocampo, project manager at Science Centre Station, told the tour group about how the project has been a very big challenge, while underscoring that the team is "very grateful seeing this massive project that will be so helpful for the city, something that's in your heart every day. I say to my guys, this is my baby." 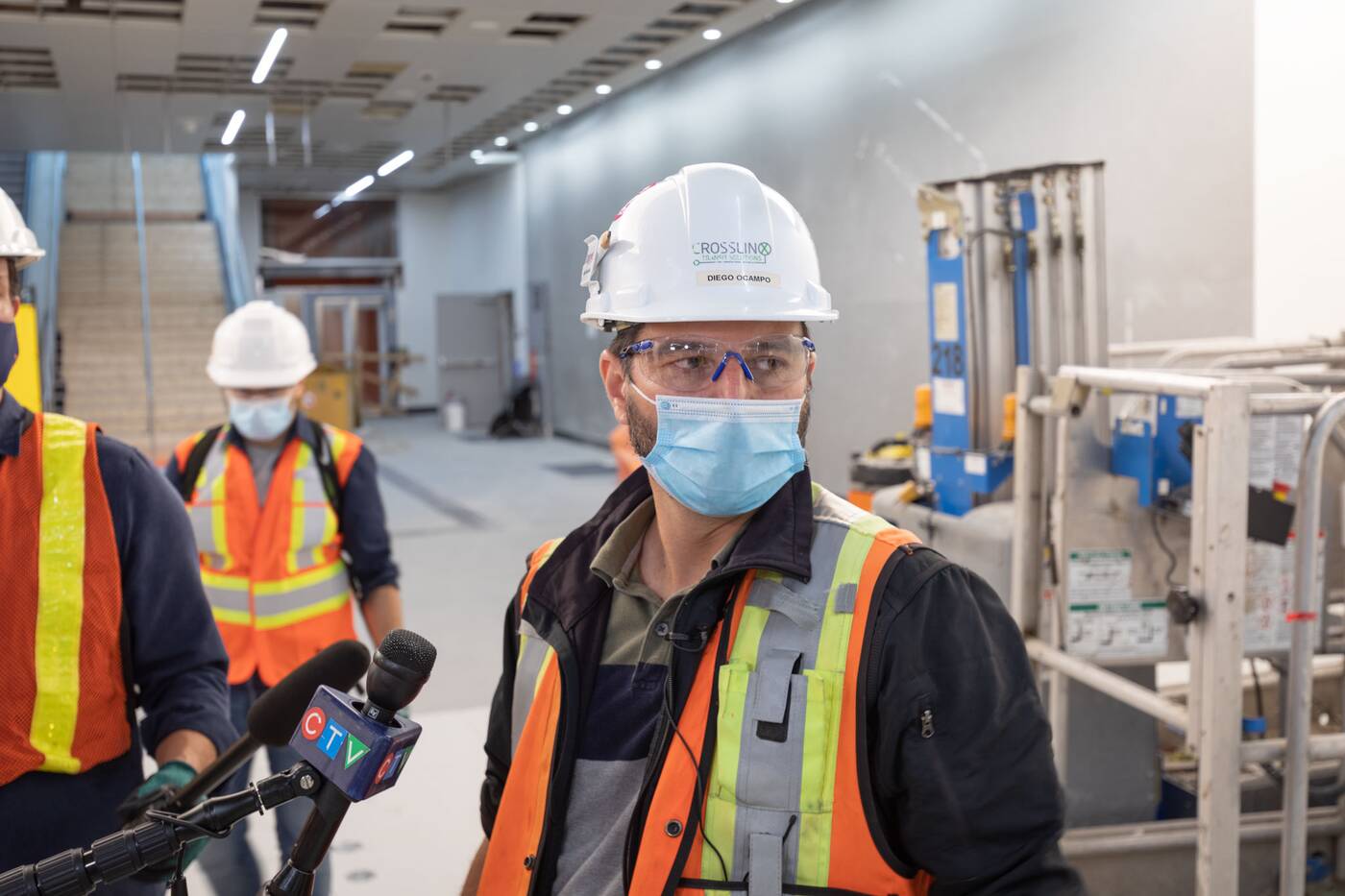 A Bombardier Flexity Freedom LRV rolling into the station was a unique event to behold, even if it snapped everyone back to the reality that this is still an intermediate-capacity system, albeit a really cool one.

Boarding one of these LRVs in an underground station is a new yet familiar experience, feeling somewhere between a proper subway and the underground stops of the Harbourfront streetcar. 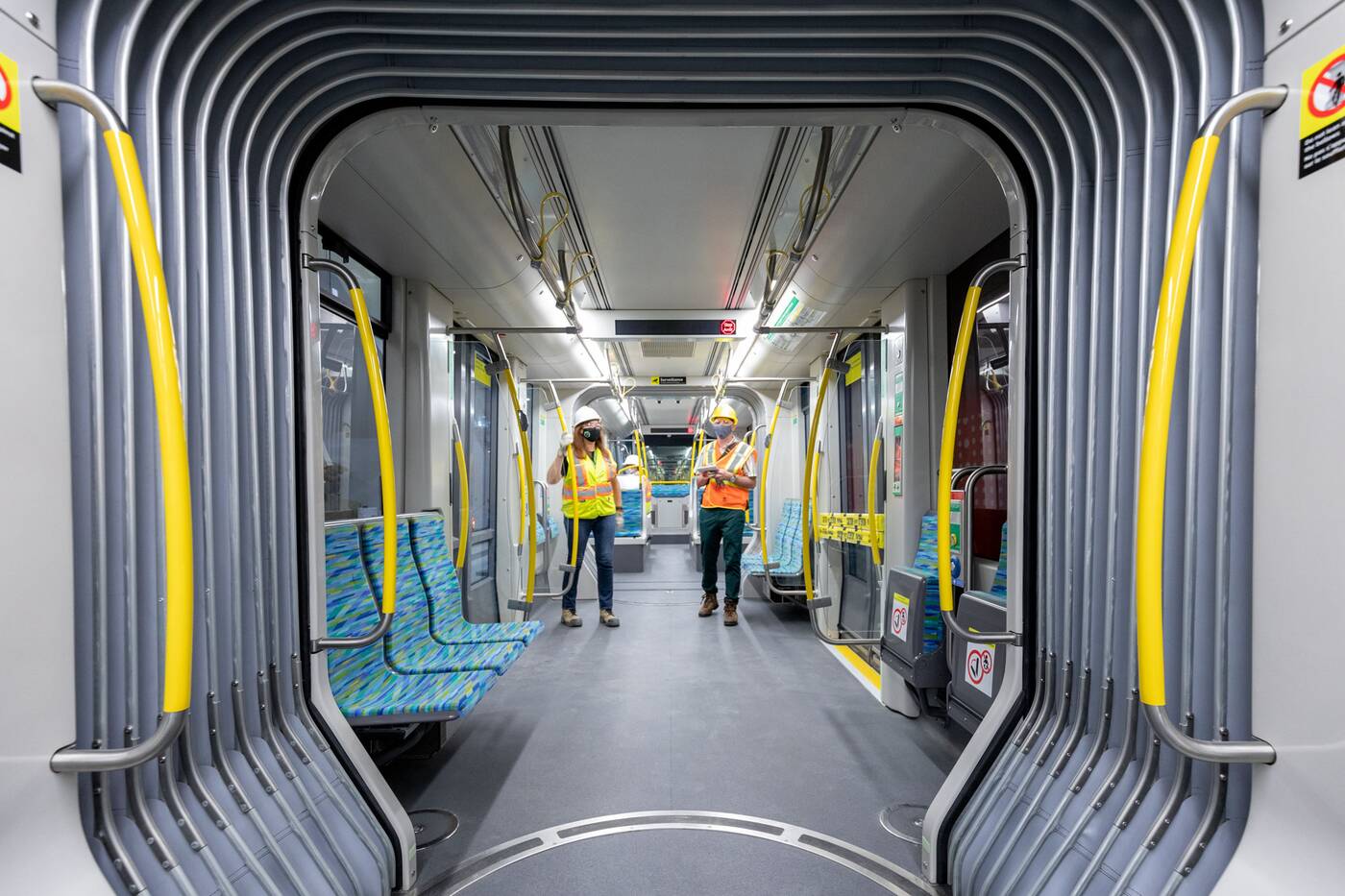 View inside of the LRV that took media along a stretch of the Crosstown on Tuesday.

Though the LRVs will operate on automatic control within the new Eglinton Storage and Maintenance Facility, they will be crewed on the line due to the many signalized intersections along the tracks' surface sections. 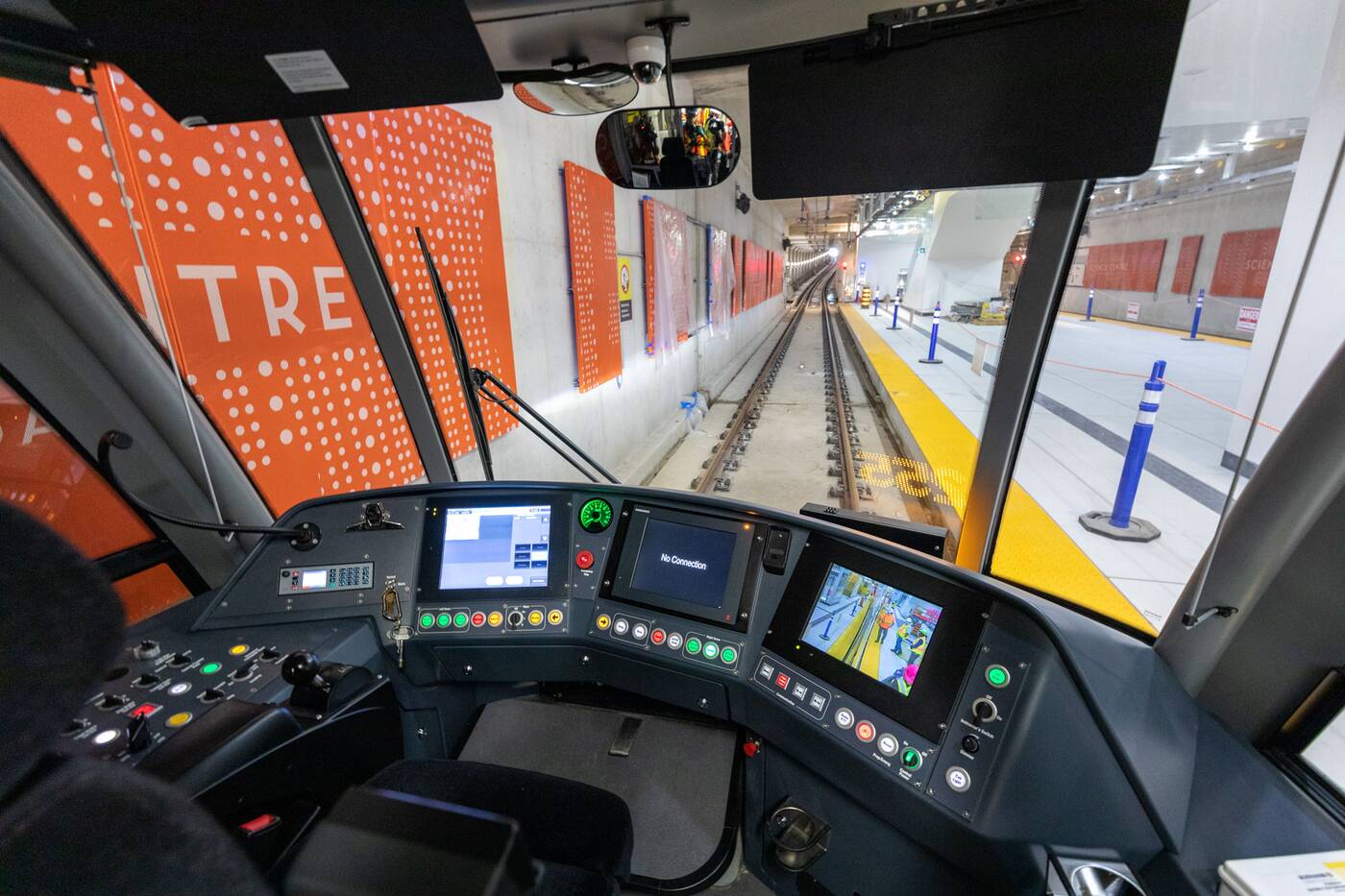 View of the LRV's driver cab within Science Centre Station.

After some time for oohs and ahhs, the trip east got underway, exiting the underground portal and emerging onto a dedicated right-of-way running through the centre of Eglinton Ave. E.

LRVs on the Eglinton Line are capable of traveling 80 km/hr, though they will be limited to a top speed of about 60km/hr during service. It was a much slower ride on Tuesday, the train crawling at just 15km/hr as testing continues. 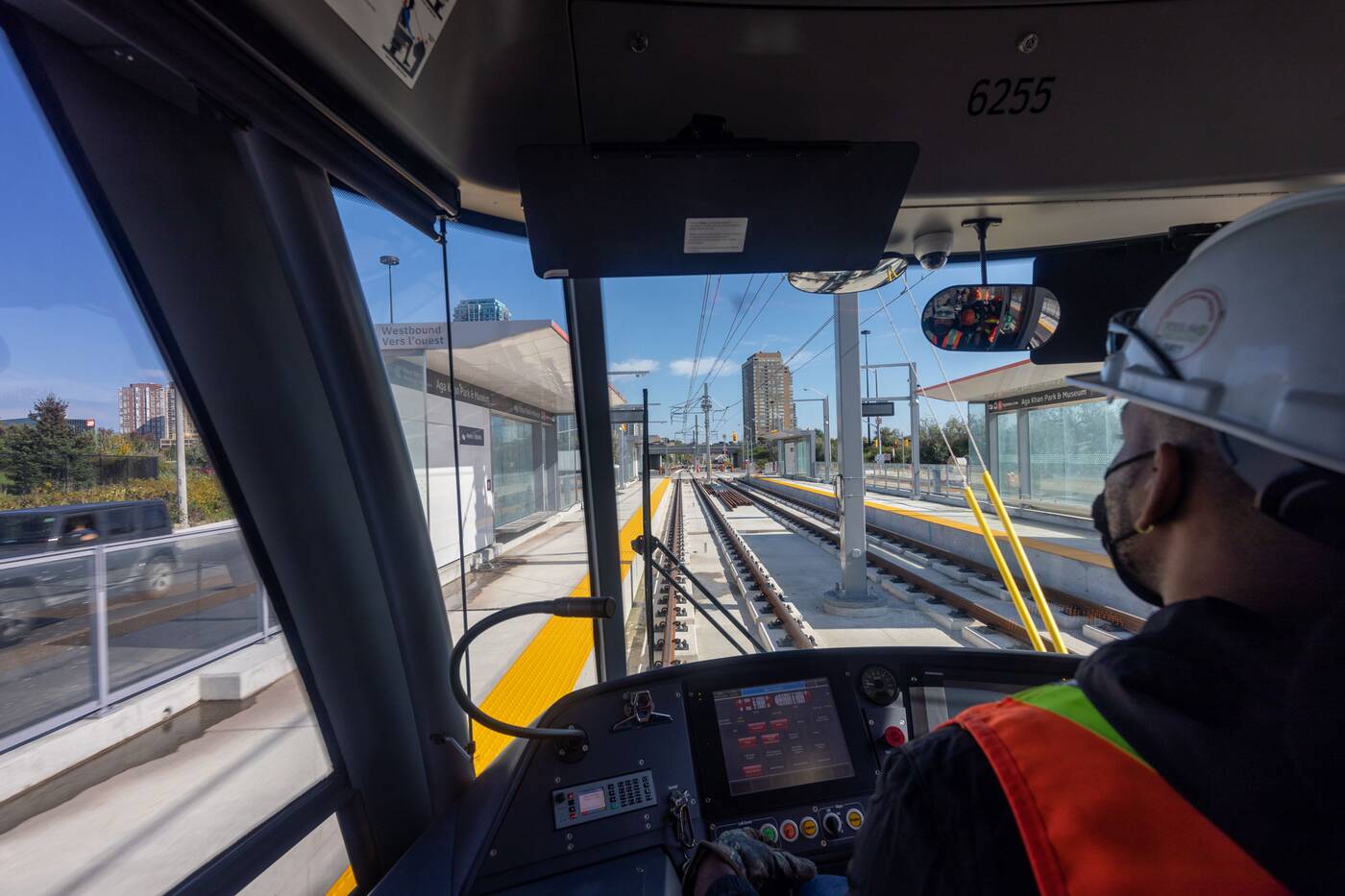 The trip continued east to Birchmount, stopping to give the media an opportunity to check out one of the line's above-ground stops. 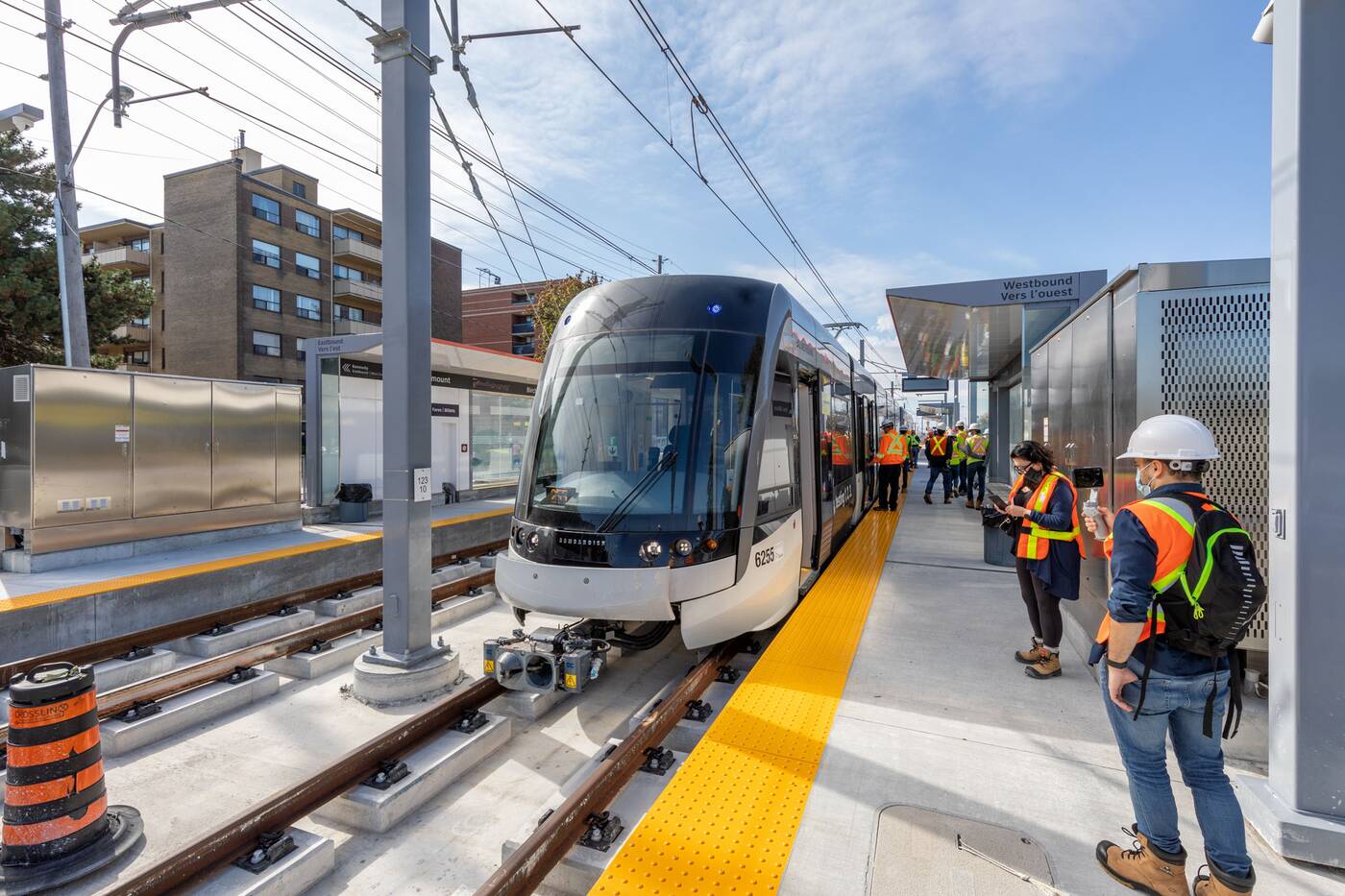 The LRV letting passengers out to explore the Birchmount stop.

After reversing the train's direction (only one set of tracks was operating for the test), the LRV began its crawl back west towards Science Centre, stopping along the way to check out a stretch of green track. 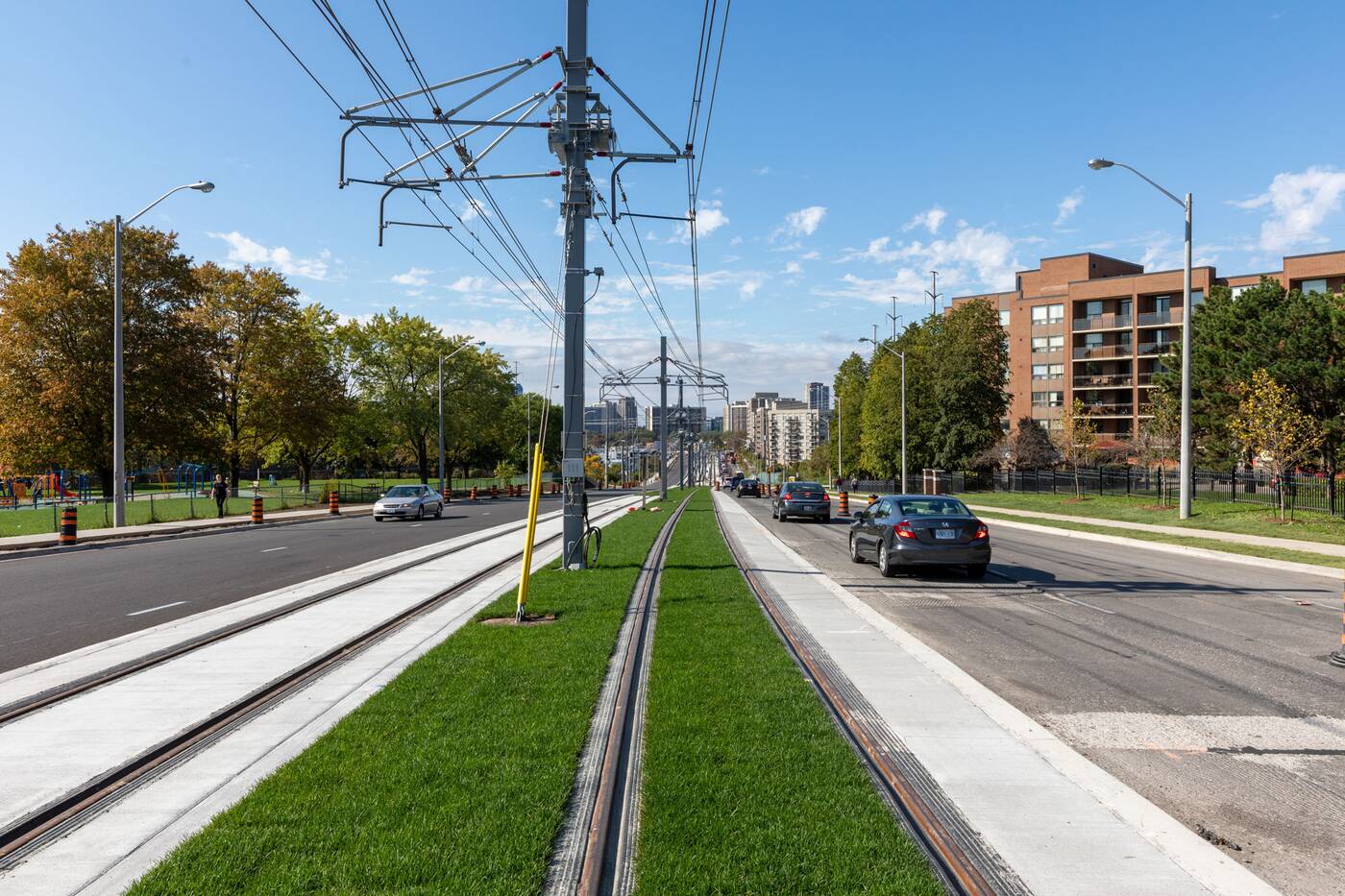 Grass and other foliage replace the standard concrete approach here, with built-in irrigation and power systems to keep the planted trackbed healthy. 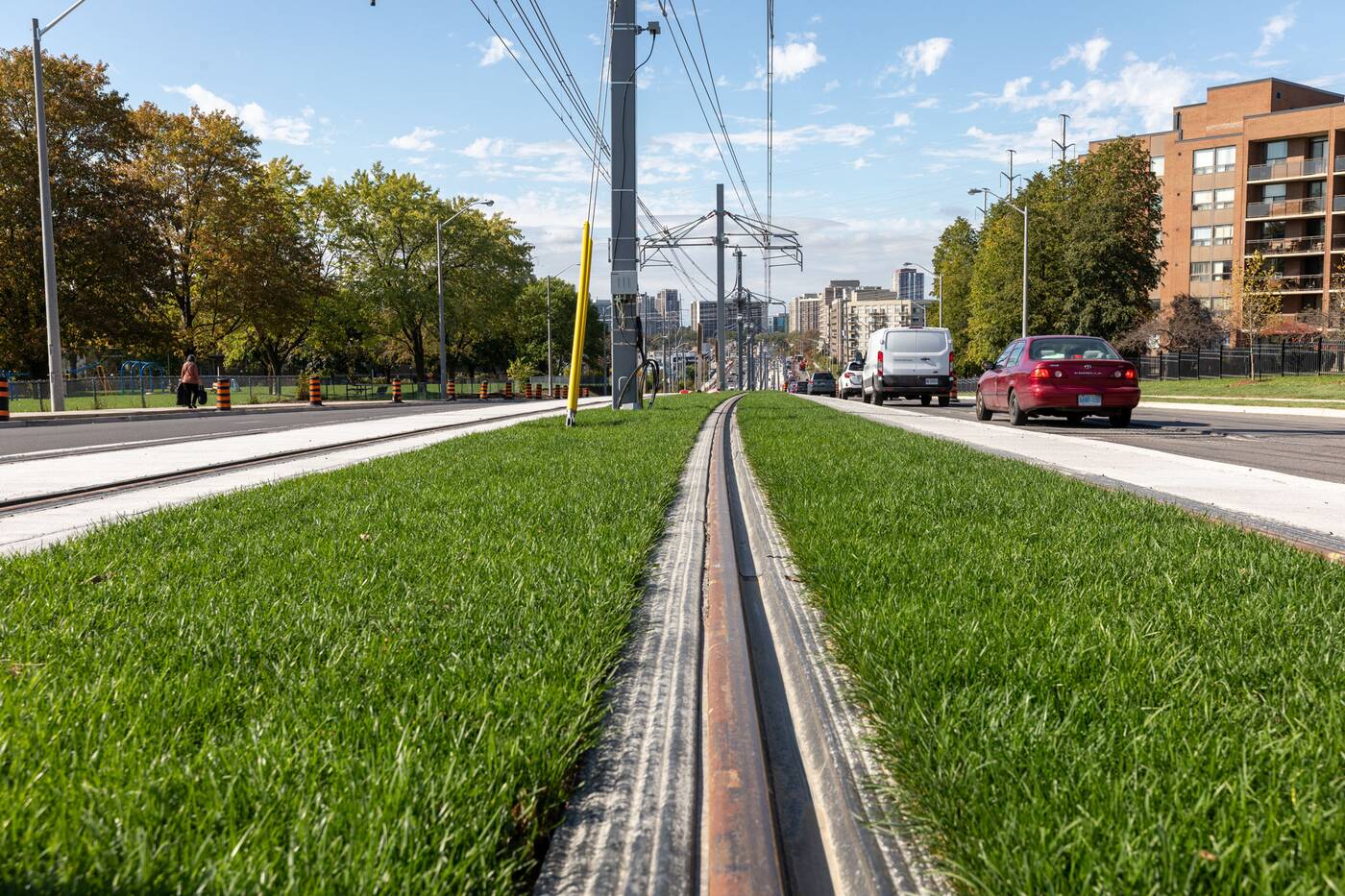 Returning to Science Centre Station was an experience on its own, the open driver cab door offering the chance to see the trip from the vehicle operator's perspective. 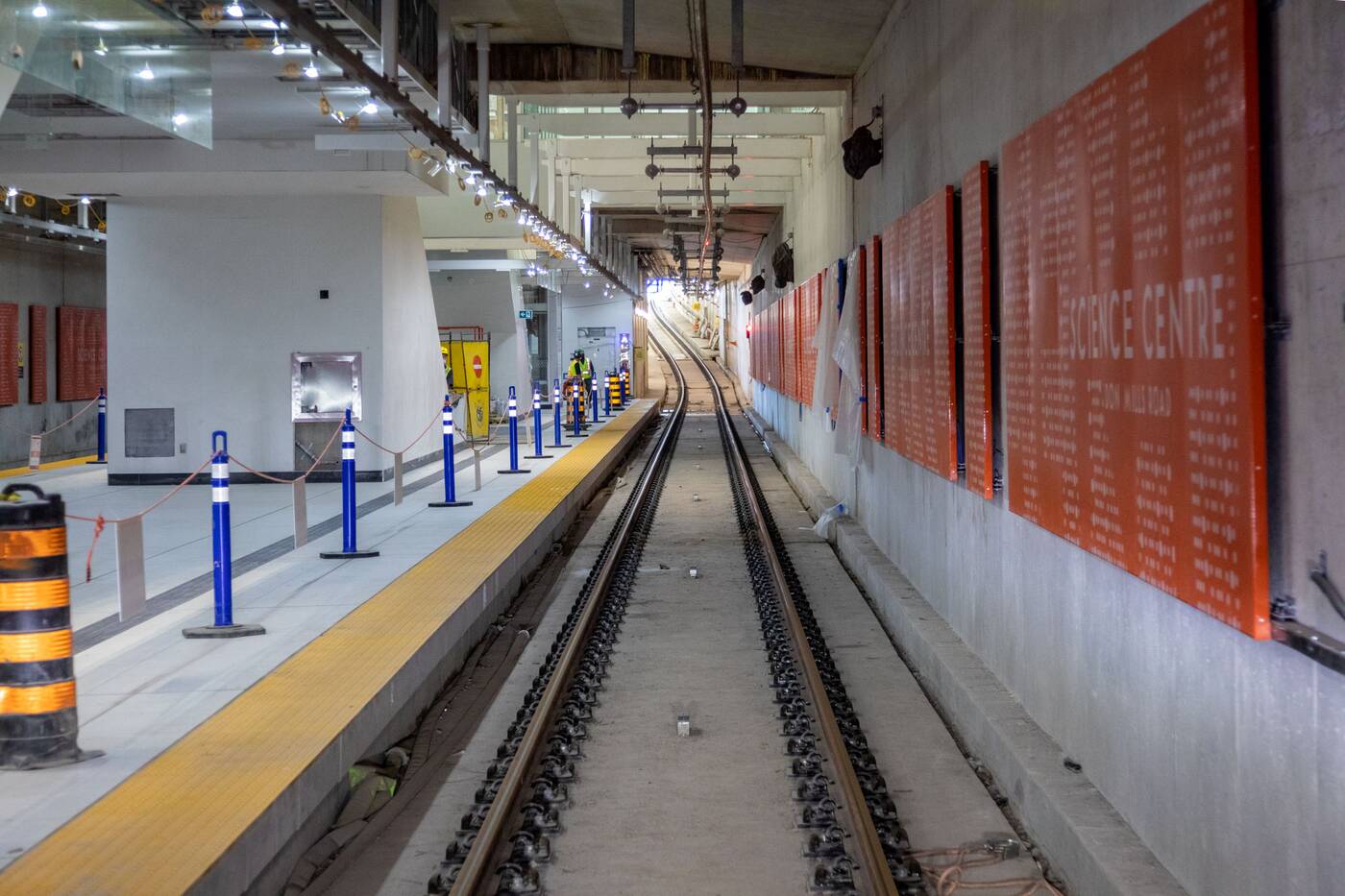 This rare preview hints at what it will be like to ride what will become Line 5 upon opening next year, but the authentic experience will come further down the road when the media gets a first glimpse at the central underground section cutting below the heart of midtown.