A tree so well known in Toronto's E.T. Seton Park that it had its own nickname — The Cricket Tree — was abruptly cut down without explanation.

People noticed the tree in the Don Valley was gone on Sept. 29 and the sudden disappearance has led to an outcry from the community.

Located at the bottom of the park entrance, the tree was not just any tree, according to a petition started by one of the Don't Mess with the Don founders, Irene Vandertop.

The tree was iconic and known as simply "The Tree" or "The Cricket Tree" as there used to be a cricket field nearby, Vandertop tells blogTO.

City of TORONTO cuts landmark tree ‘Cricket’ in Don Valley without consultation, notice, or information to the public. Community is outraged and demands a new tree 👉https://t.co/gx9bAmqVmJ👈 It was a community meeting place & gathering + trading place for indigenous community

She believes the maple tree was about 35 years old and meant a lot to many people who used the park. It was common for people to just say – 'we will meet by the tree,' she says.

"This tree was not just any tree," Vandertop says. "This was this was a communal hub for many communities like Thorncliffe Park, the mountain bike community, hikers, runners, this tree symbolized a kind of coming together for people taking a break, sharing stories."

Many commenters on the petition expressed how shocked and saddened they are learning about the tree's demise.

"I am heartbroken that (the) cricket tree was removed," wrote one person. "For over twenty years when I ride my bike in the Don I have said to my friends 'see you at the cricket tree.' Now the landscape is empty and ugly."

Vandertop says she can't understand why there wasn't a consultation. The tree was just gone without warning.

"The fact that the tree was cut down in a blink — I could not even have protested it or tried to argue otherwise," she says. 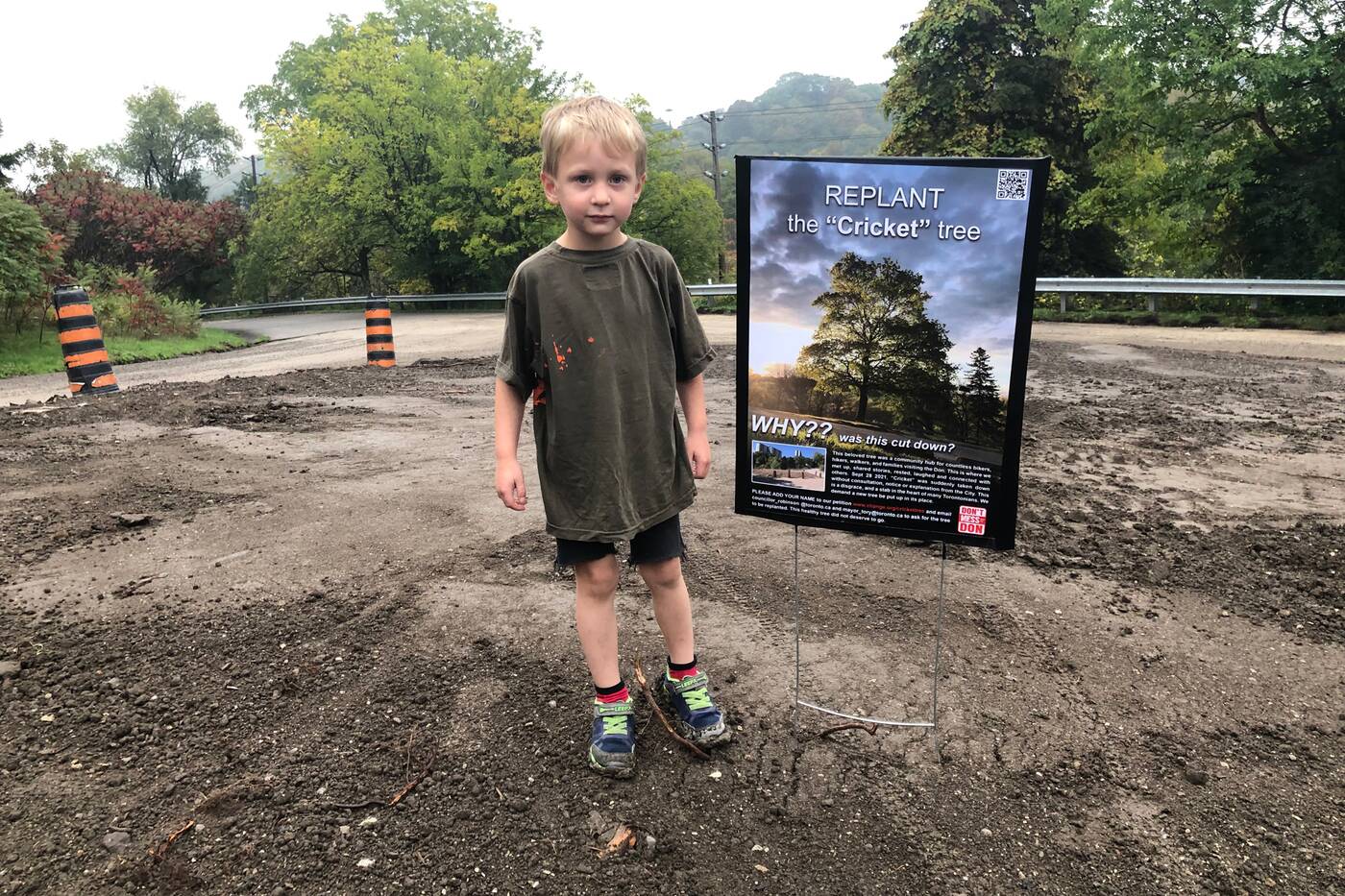 Protecting the trees and the natural environment is so important, she adds.

"It's so fragile already we are under such a big threat in the valley from invasion from developments, Metrolinx expanding into the Don Valley," she says. "Who's standing up for the trees? Our hope was that the city would do that."

It appears as if the city was not aware the tree was going to be cut — despite it being in a public park.

The City of Toronto Parks, Forestry and Recreation (PFR) department tells blogTO they are undertaking capital construction project work to improve and enhance the driveway to Thorncliffe Park Boulevard and the pathway through E.T. Seton Park.

"At a recent site visit, the project team identified safety issues at the fork at the bottom of the driveway and began discussing options to improve safety through improving sight lines, which included potential tree removal and replacement," the city says in a statement.

But while city staff was preparing paperwork to hire an arborist to look into vegetation management for the project, the contractor working on the site cut down two trees on Sept. 29, the city says. 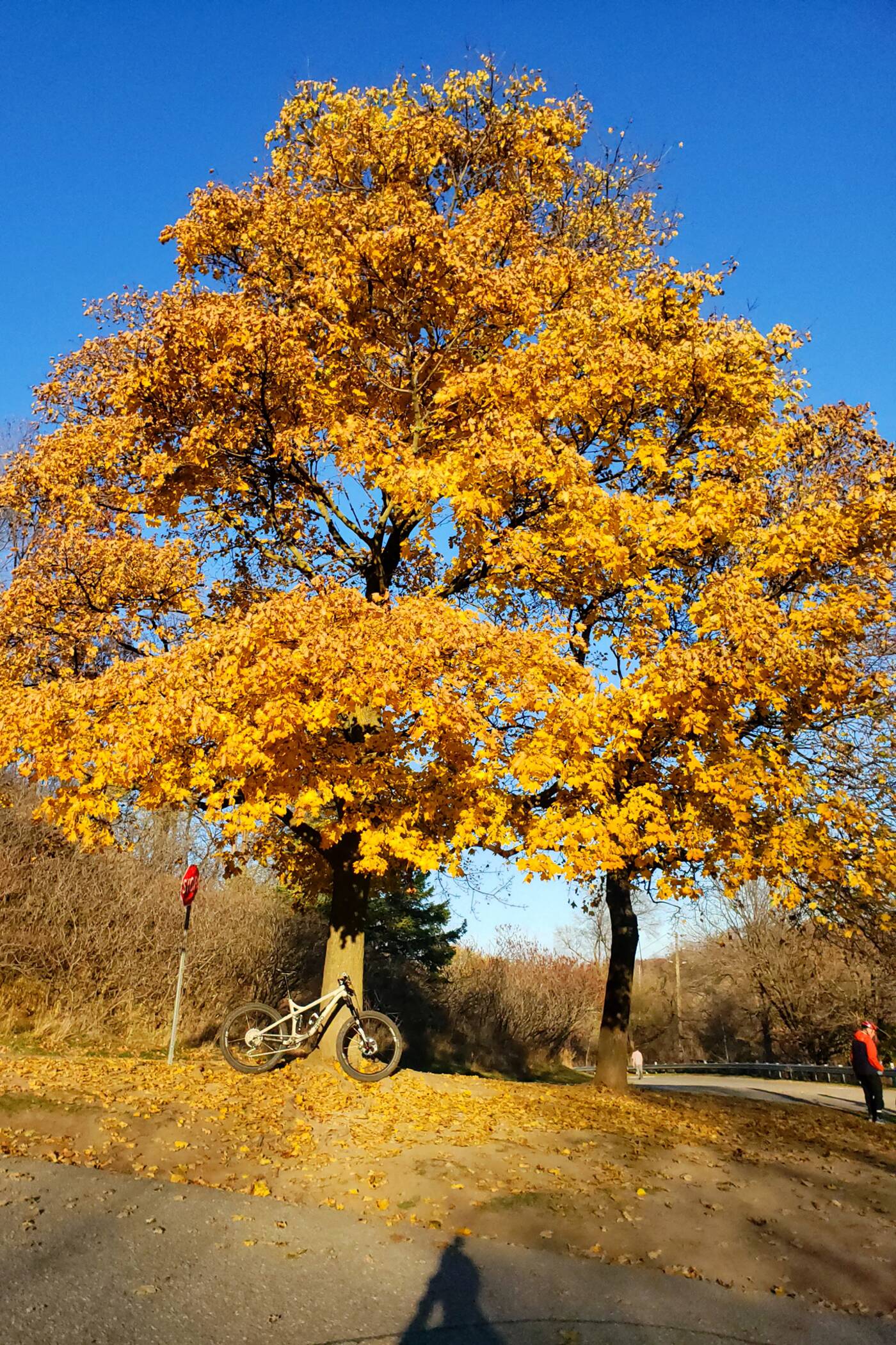 The tree was a meeting spot for cyclists and walkers in the park. Alexandre Naggar photo

"No permits were issued by Urban Forestry for the removal and PFR staff did not expect these trees to be removed at this point in the project's timeline."

City staff is investigating why the trees were removed prematurely.

"Urban Forestry's Compliance and Enforcement unit is involved and will review tree replacement planting requirements to compensate for the loss of the trees," the city says.

Sadly this comes a bit late.

"It makes me feel really sad because I have memories there," says Vandertop. "And my four year old kid... it will take him his entire life for another tree to grow back in the same to the same size as this tree."