The Canada Life Building is a treasured Toronto landmark, well-known for its famous weather beacon towering above University Avenue. A recent sign review application tabled with the City could spell significant changes for the Depression-era office building, showing proposed changes to the classic "Canada Life" signs mounted just below the beacon.

Installed in 1951 and upgraded to LED lighting in 2019, the famous weather beacon turned 70 years old in August. The building is also well-known for its minimalist signage, now threatened with replacement.

The first hint of trouble for the famous Canada Life sign at 330 University Avenue came in early 2020 when Canada Life revealed new branding for their buildings in Toronto and Montreal.

Sign of the times! We unveiled the new Canada Life signs on our buildings in Toronto and Montreal. #MyCanadaLife https://t.co/qRv2PgXKIg pic.twitter.com/GTva1bnQgA

New signage is one facet of a broader rebrand that consolidates three company-owned insurance brands under the Canada Life name.

Like any big re-branding, high visibility is a huge asset. Canada Life has a prime opportunity to get its new logo out to the masses by switching up the building's signage to an updated version.

Side-by-side comparisons reveal differences between the clean and minimal text currently used and a much more complicated design that would replace it. This replacement branding has an asymmetrical design that would bring a distracting shot of red to the limestone exterior. 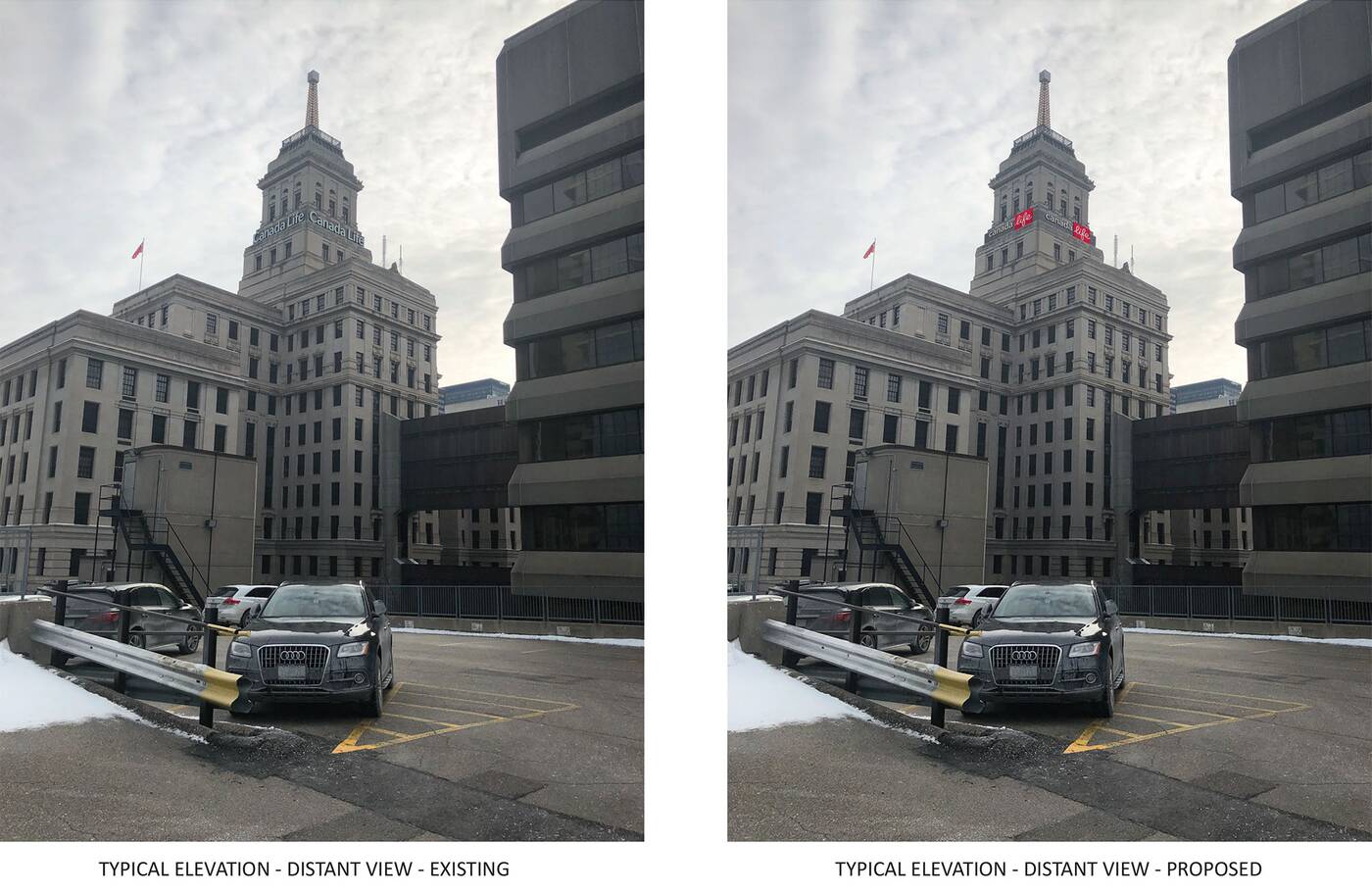 Current (L) and proposed (R) Canada Life signage viewed from a nearby rooftop.

The new sign would be built by Pattison Sign Group, consisting of two sections; the "canada" portion measuring around 5.8 by 1.4 metres, and the "life" portion at approximately 3.8 by 3 metres. 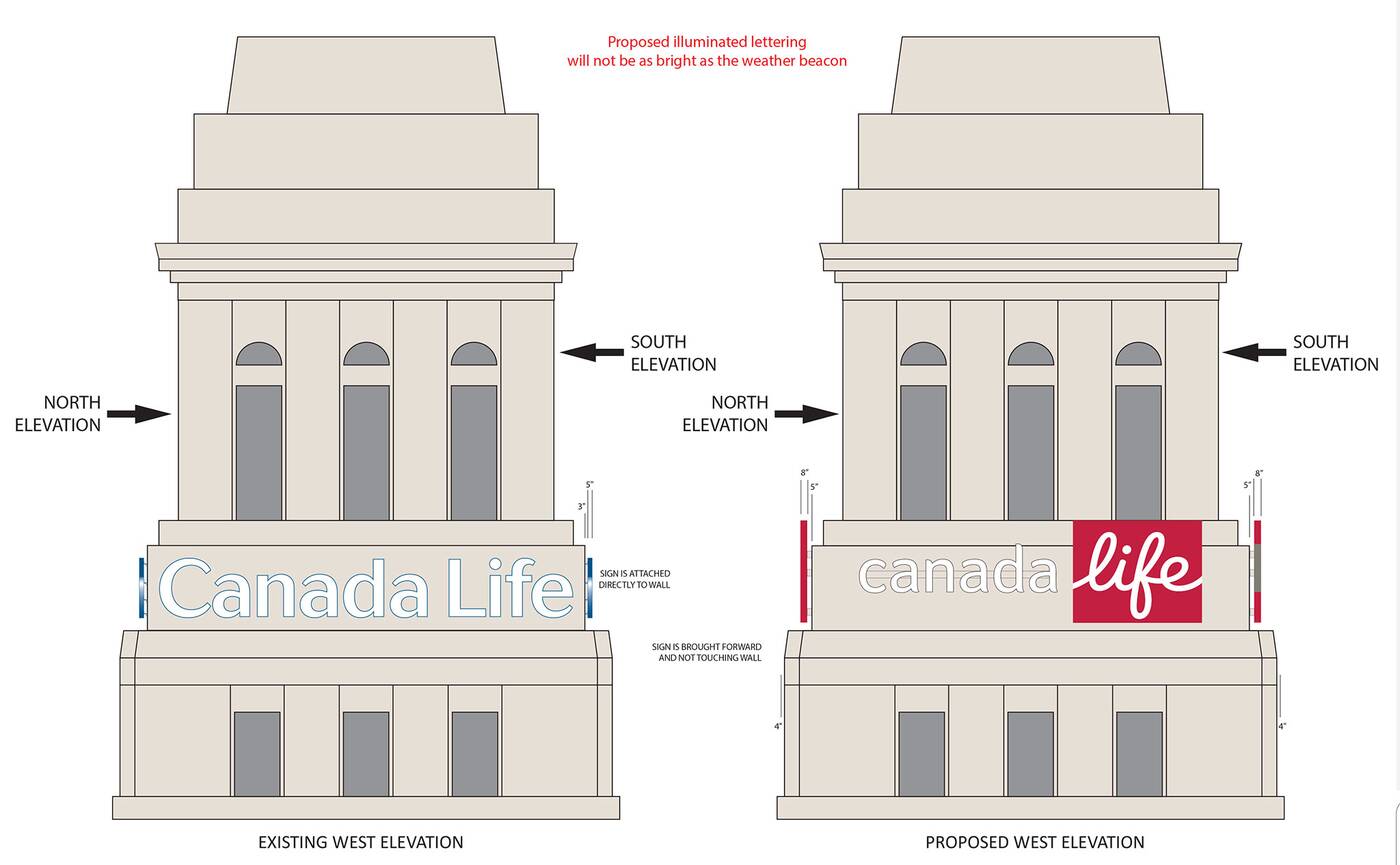 A representative from Canada Life tells blogTO, "We're updating our building signage across all of our major centres in Winnipeg, London, Regina, Montreal and Toronto to align with our new Canada Life branding." 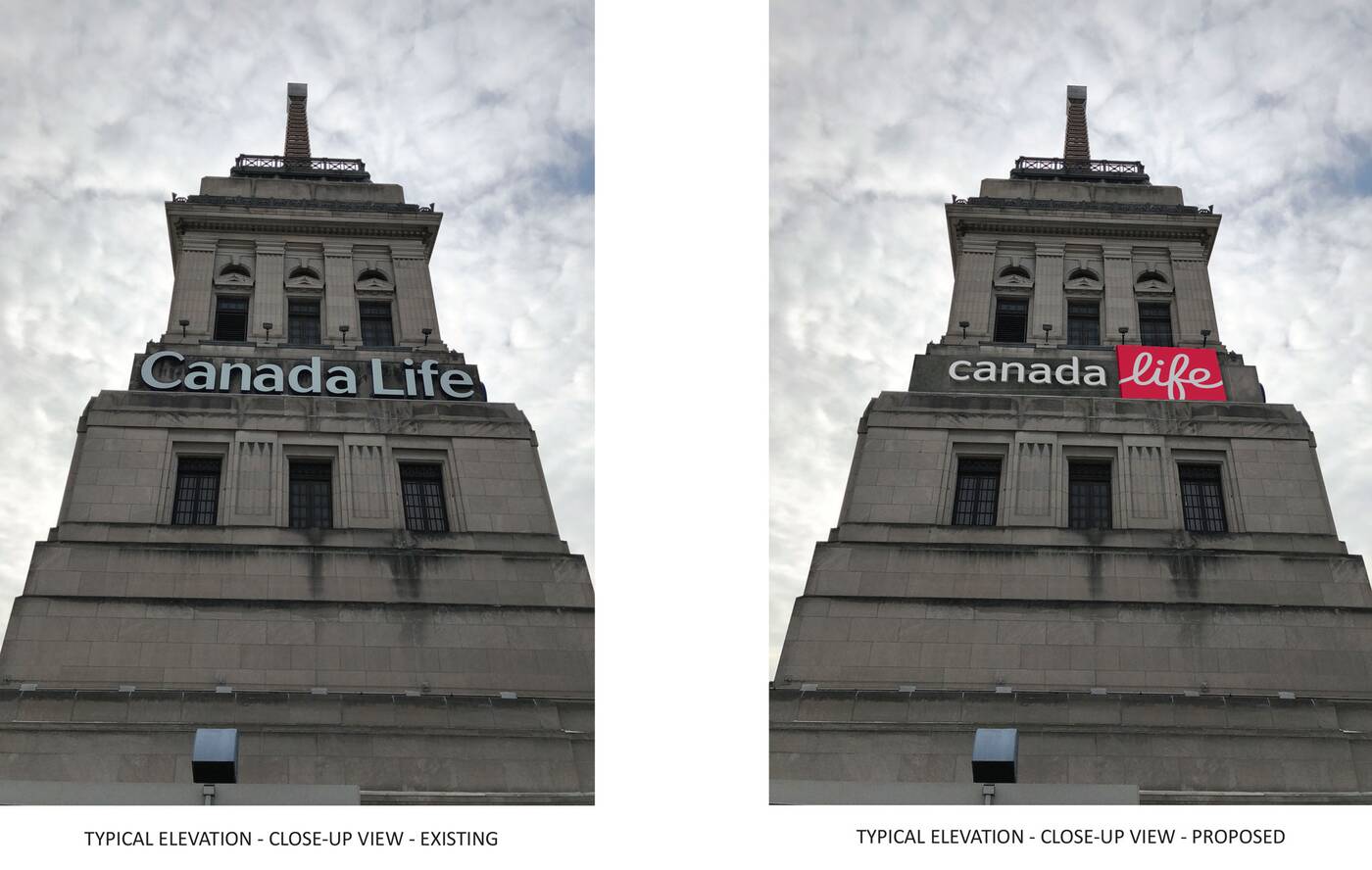 Close-up view of existing (L) and proposed (R) signage below the weather beacon.

"We're currently still working with the City of Toronto to ensure we have the proper permits to proceed with signage changes at 330 University."

Still, there are potential obstacles in the way of this getting a seal of approval from the City.

Nikoo Shabestari, Sign Building Code Examiner with the City, tells blogTO that the application will take time to process, and will take the building's heritage value into consideration.

"The application review process has not been started yet. Like other applications, it needs approval from several divisions, and specifically for this one, heritage approval is required."

Pattison Sign Group via submission to City of Toronto