Think of suspension bridges, and the mind conjures up images of globally recognized landmarks like the Golden Gate Bridge.

For residents of Scarborough, a more local example might come to mind, a single-lane suspension bridge tucked away just northwest of the Toronto Zoo. 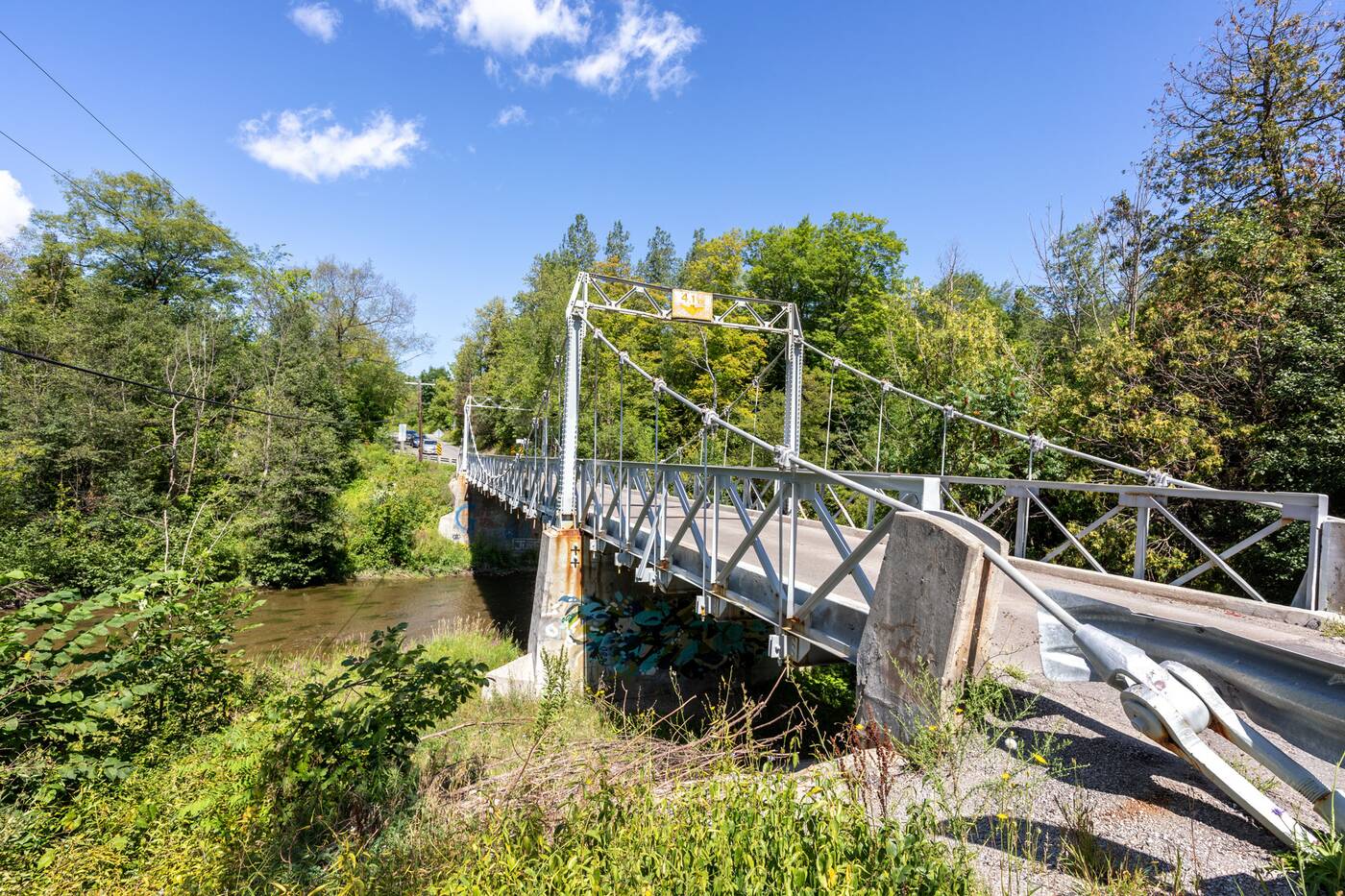 Constructed in 1912 (over four decades before Scarborough Township was incorporated into Metro Toronto) and restored in 1981, the bridge carries a single alternating traffic lane over a scenic stretch of the Rouge River.

The bridge and road it is named for pass through a relatively low-traffic area with a distinctly rural feel.

Sewells Road connects the last pocket of undeveloped farmland in Toronto to the north along Steeles Avenue with the more built-out areas to the south towards Old Finch Avenue. 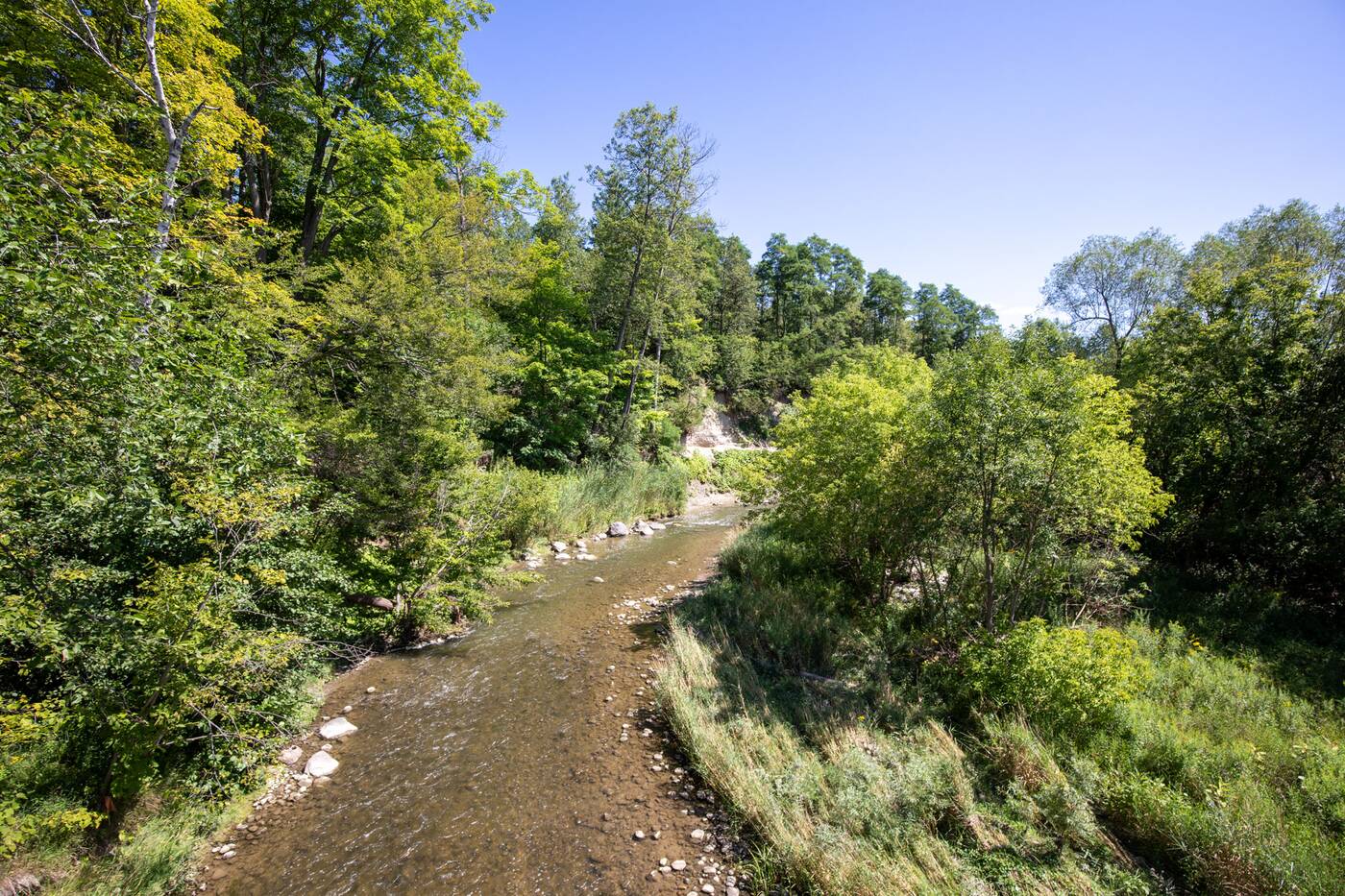 A pair of cables anchored to towers support the 50-metre span, which research suggests is among the shortest towered suspension bridges in the world. 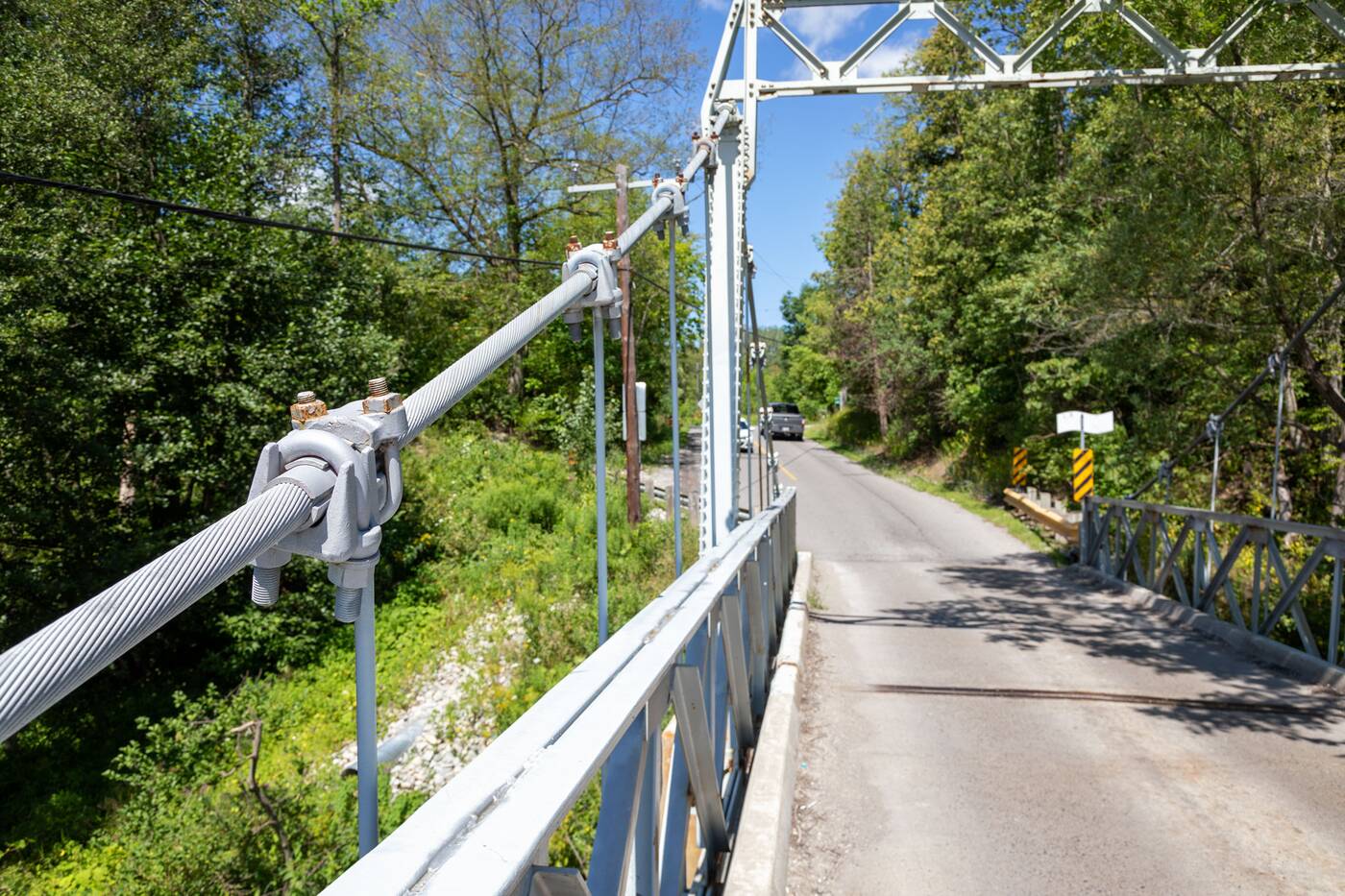 It spans approximately twice the length of the shortest known suspension bridge — the Wiggly Bridge in York, Maine — though that bridge is limited to pedestrians, its name being a pretty good indication of why. 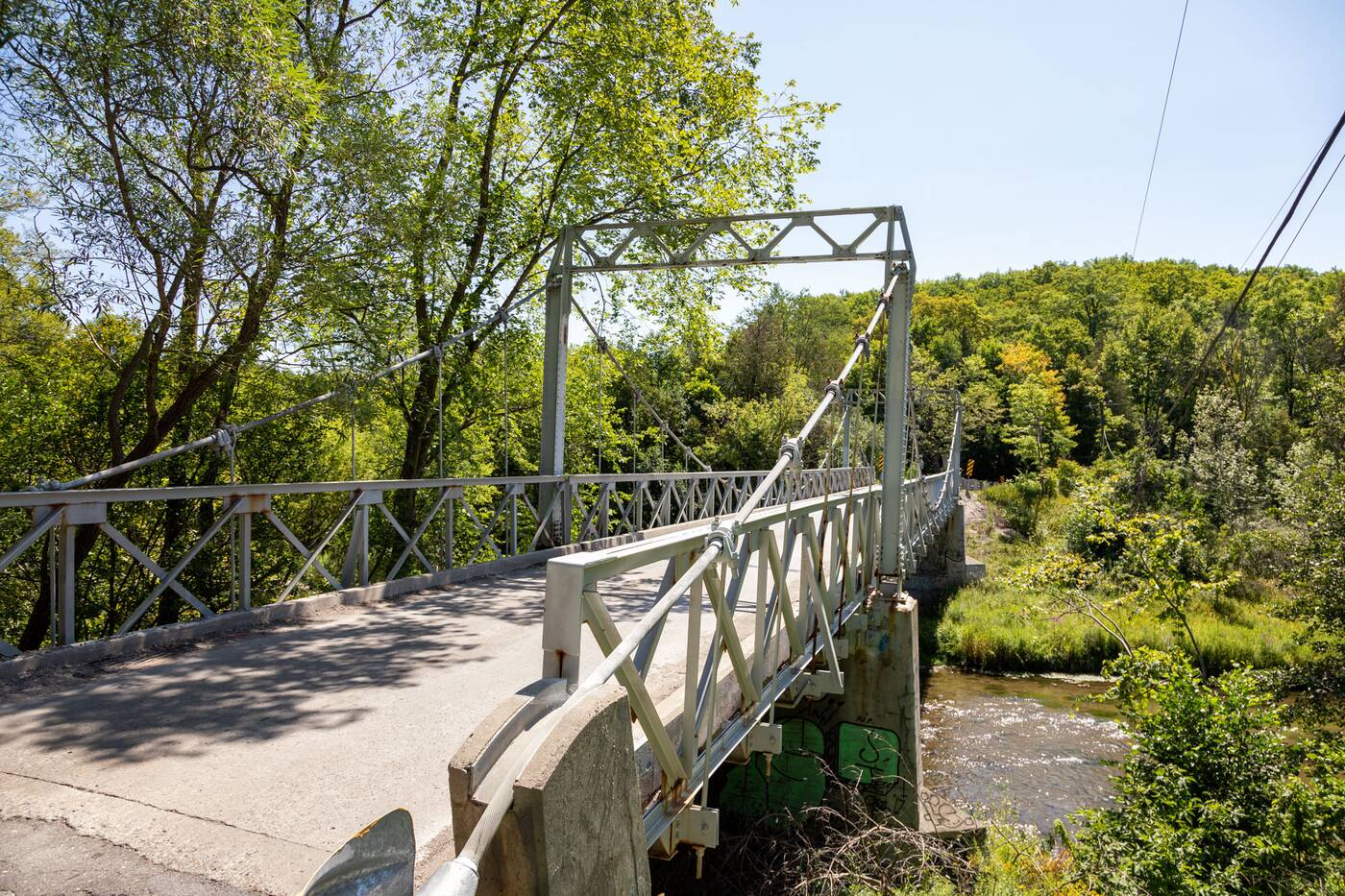 In contrast, you'd have to stack almost 40 Sewells Road Bridges end-to-end to match the length of the world’s longest single suspension bridge span, the central span of the Akashi Kaikyō Bridge in Kobe, Japan.

A hidden treasure well-known by locals and infrastructure geeks alike, the bridge is a rarity in Toronto and the only suspension bridge carrying road traffic in the province that does not cross an international border.

The other three suspension bridges with road traffic in Ontario (the Ambassador Bridge, Ogdensburg–Prescott International Bridge, and Thousand Islands Bridge) all dwarf the Sewells Road Bridge in scale.

Smaller scenic pedestrian suspension bridges are scattered throughout the province. 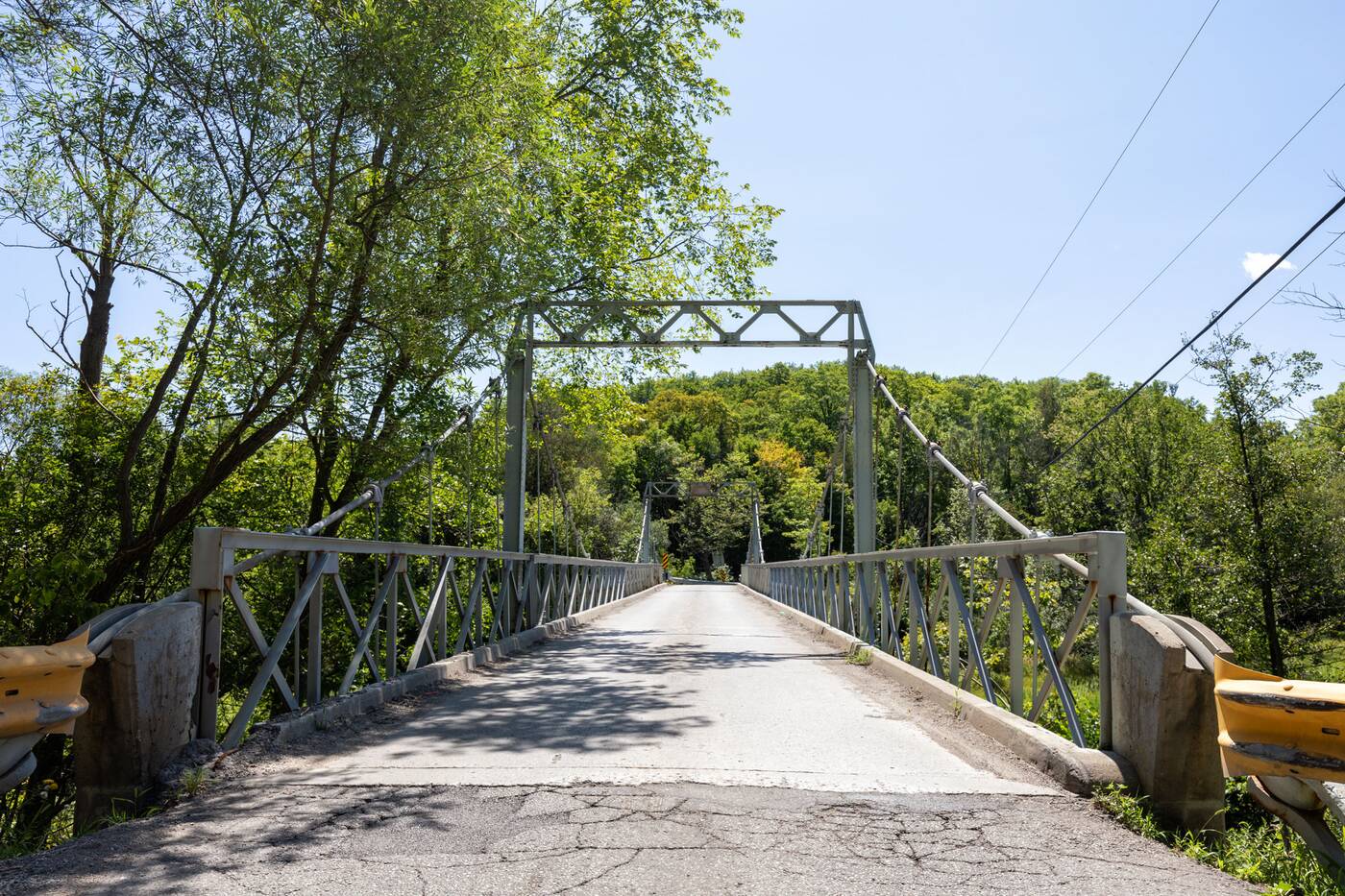 A plaque was installed just south of the bridge during the 1981 restoration, providing some history to those passing by.

In 1912, Frank Barber, Civil Engineer (1878-1945) designed and supervised construction of a steel suspension bridge for the Township of Scarborough. Foundations and substructure were built by Lewis Construction and the superstructure by Frank Barber. In April, 1981, restoration of the original bridge was completed, leaving its original appearance unchanged. Design for restoration work was by Consulting Engineers Gregg and Edens Ltd., with construction by S. McNally & Sons. This bridge is a unique example of its type in Ontario, demonstrating the advances achieved in civil engineering at the time of its original construction, and it stands today as a tribute to Professional Engineers in Ontario. 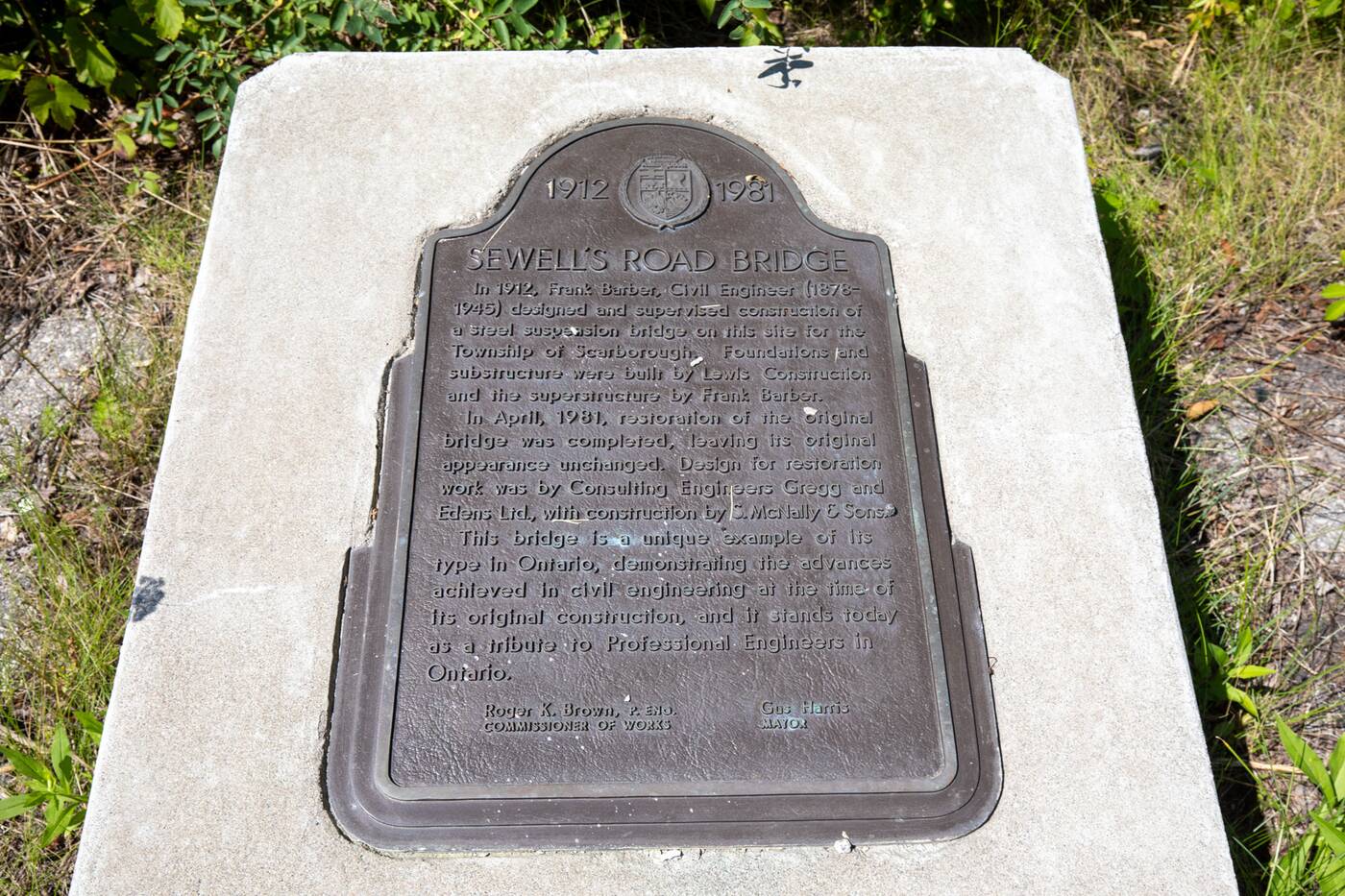 Other similar styles of bridges may look the part — like Harbourfront's cable-stayed Amsterdam Bridge — but the Sewells Road Bridge stands alone as a one-of-a-kind standout among Toronto’s 1,055 bridges.

If you're planning a visit to the Toronto Zoo by car, the bridge is just a quick detour off the beaten path. The immediate area is home to another infrastructure anomaly with the nearby Old Finch Avenue Bailey Bridge. 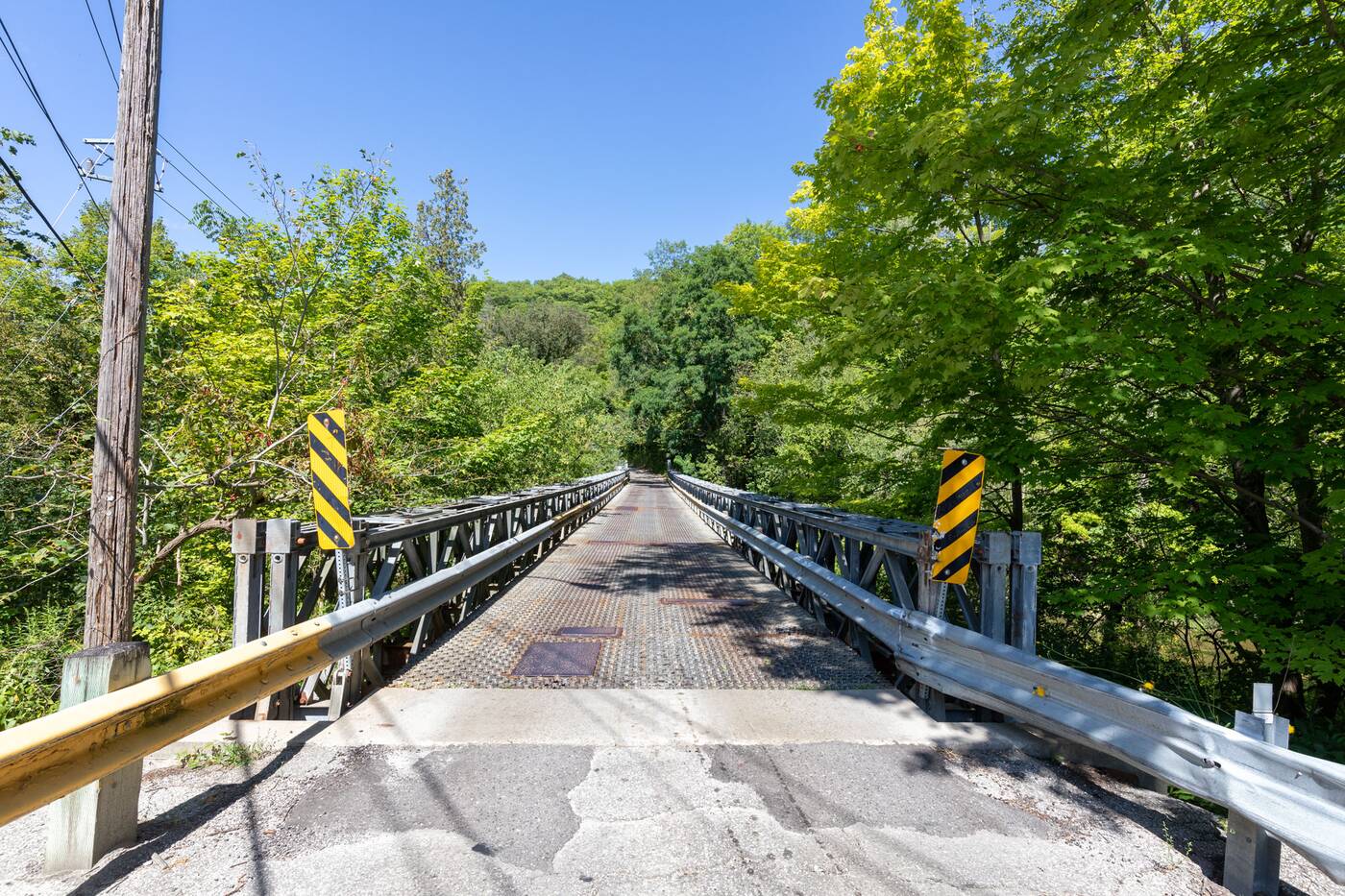