The Ontario government made ads that feature a creepy talking toilet

Whatever your thoughts on how they've handled the pandemic, you've got to give props to Ontario's Ministry of Health for keeping on top of reminding residents to schedule important checkups.

If you happen to be within a demographic considered at risk for breast, cervical or colorectal cancer, you may have received letters in the mail from Cancer Care Ontario "inviting" you to get screened. This service is automatic and run by Ontario Health.

There are surely some people who miss the memo, however, or ignore calls from their doctor's office asking them to book a test.

For these people and all others who might be interested, the government has created ads in which a cartoon toilet appears to open its... bowl? mouth?... and declare that "colon cancer is 90 per cent curable when found early."

It's an important message, but like... why does the toilet appear to be talking? Why does it have eyebrows?

The simple digital poster, which includes a "Paid for by the Government of Ontario" tag, is essentially encouraging people to get one of the province's newer, "easy at-home" tests for colon cancer.

Clicking upon the ad, which was uploaded to the Ontario Government's YouTube channel on Aug. 13 (and served up to one blogTO staffer through the AdChoices widget on an Ontario-based newspaper's website Thursday morning), will take you to the government's website for Colon cancer testing and prevention information.

There, right at the top, is a button that reads "get an at-home test." That section of the site specifies who should get a fecal immunochemical test (FIT) based on their risk level, how to go about ordering a test, and then how to "complete the test."

It is here where the image of an anthropomorphic toilet becomes anything but cute. 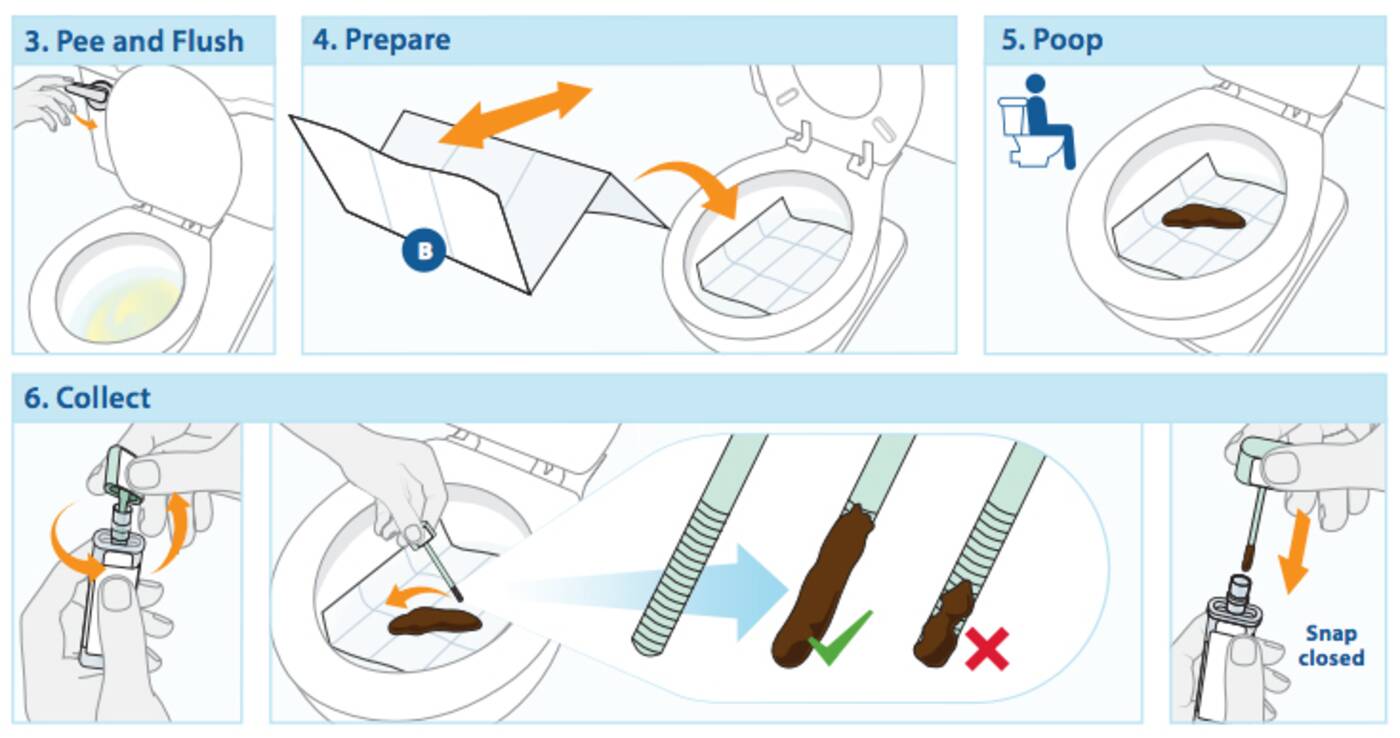 One part of the FIT instruction sheet shows what the government's toilet is asking you to do to it. via Cancer Care Ontario.

A link to more detailed visual instructions actually shows a person figure sitting on the toilet. The toilet is seen with an illustrated stool inside it.

Another frame shows a hand collecting their sample from the toilet's mouth, with "do" and "don't" illustrations to show what lab analysts are looking for in a sample. Then the toilet is flushed.

Is this the same animated toilet from the ad? Why would anyone do this to them? Does the toilet like it? Then why isn't it smiling?

My research shows that the toilet character was actually introduced on the Ontario Ministry of Health Facebook page back in early March of 2020 — right before COVID hit.

Little else has been seen of the toilet, which has eyes inside the tank, until this most recent advertising push. Nobody seems to be critiquing or overanalyzing the campaign yet, aside from me, but it's only a matter of time. Look at the toilet's face. It looks terrified.

The toilet ad has appeared in pre-roll before YouTube videos, as its own YouTube video, on Facebook and in banner ads online. Image via Government of Ontario.

All jokes aside, the campaign is raising awareness about a free, important medical test that could (and does) save many lives.

"The fecal immunochemical test (FIT) is a safe and painless test that checks your stool (poop) for tiny amounts of blood, which can be caused by colorectal cancer or some pre-cancerous polyps (growths in the colon or rectum that can turn into cancer over time)," notes Cancer Care Ontario.

"You can do this test at home and it only takes a few minutes."

What are you waiting for? Toilet is hungry.

The Government of Ontario