Residents of a small street in Leslieville are frustrated by never-ending inconveniences resulting from a puzzling century-old road realignment.

This small street is Gerrard Street East, though we are not talking about the bustling thoroughfare most are probably already familiar with.

Just south of the Carlaw and Gerrard intersection, a small side street shares the Gerrard name with its more prominent parent street.

Running approximately 90 metres between Carlaw and Boston avenues, this disconnected, narrow street is divided from the larger Gerrard Street East by a small green space and a parkette, with no connection between the two roads. 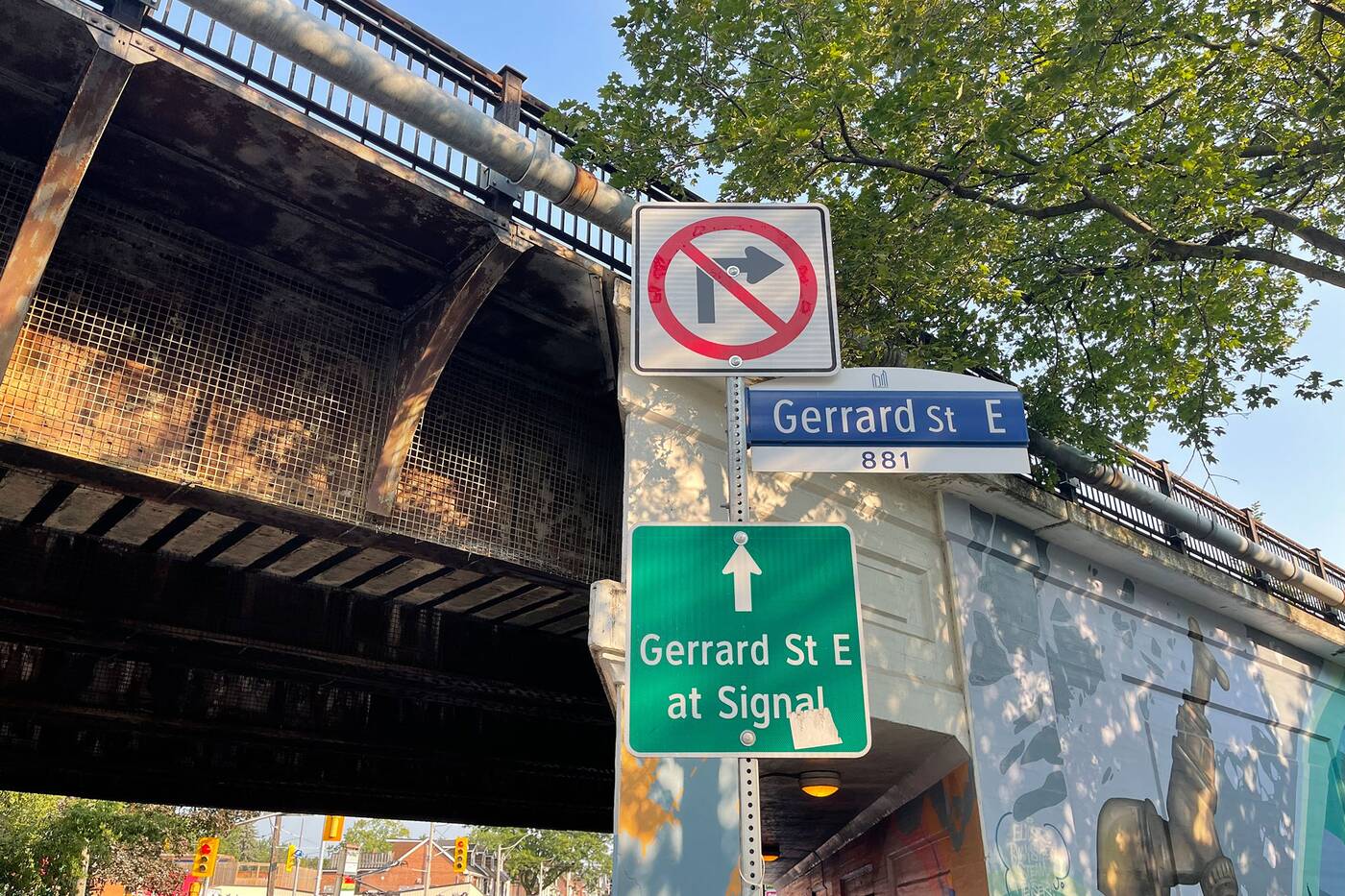 Confusing signage near Gerrard and Carlaw. Photo by blogTO.

This head-scratching configuration has proven frustrating for drivers as well as local residents. The problem here is that many drivers travelling north on Carlaw Avenue turn early at the first Gerrard Street and soon find themselves trapped.

Larger vehicles are especially prone to issues on the lesser Gerrard. Its roadway is far too narrow to accommodate a three-point turn by the public transport and heavy haulage vehicles destined for the Gerrard one block to the north.

Resident Timothy Millan has been vocal in trying to get these issues fixed, his Facebook page Why Two Gerrards? a rallying cry for the homes on this stretch that have to deal with regular nuisances.

"It affects various streets around us," Millan tells blogTO. "I get people calling me all the time to report big trucks on the street."

"We'd just like the City to finish what they started in 2007 when they extended the frontage of the first seven houses on 'old Gerrard' and extend the frontage of the ten remaining houses across that stretch of obsolete asphalt. They would create more green space and at the same time eliminate the possibility of this issue ever happening again."

Another resident, Andrew Carter, tells blogTO that there have also been a few incidents involving TTC buses mistakenly turning onto the street.

"One evening, a bus driver entered our street and gave up immediately. He then waited for another TTC official to come and help him back the bus out to Carlaw again." 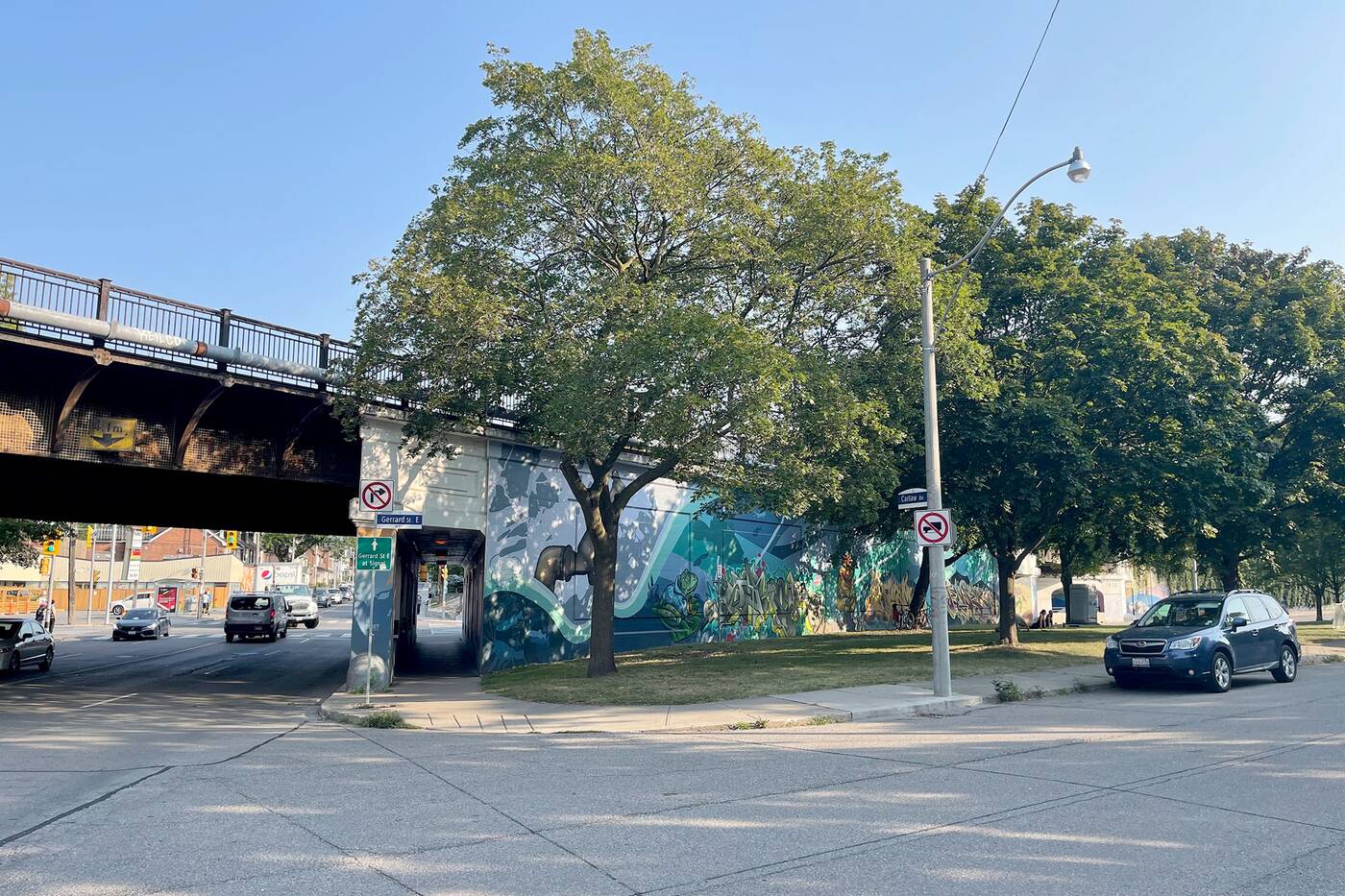 Toronto-Danforth councillor Paula Fletcher has been working to address these issues with the City for about a decade now.

Her office's efforts have included many attempted solutions like turn restrictions and signage, but wrong turns are still a regular occurrence here, causing continued headaches and property damage for residents.

"The 'no right turn' signs that have been installed at the Carlaw corner are either ignored or not seen," Andrew Carter says. "The corner of Boston Avenue and Gerrard Street East has seen a lot of deep tire treads carved into the lawns from transport trucks."

"We've tried to put in signage, and next we're going to try to narrow the throat of the street, so it's very clear that it's not a big wide arterial," said Councillor Fletcher. "I've been working with Transportation Services to look at how can we narrow this intersection to the point where it's clear, you shouldn't be going here."

Other solutions like converting the street to one-way traffic emptying onto Carlaw would require support from the majority of residents on this portion of Gerrard and the connecting Boston Avenue.

"I think it's important that there's a consensus of people living on the streets when you make a big change. If it's not an overwhelming number of people, then I think we're forcing something on them that they might not all agree to," said Fletcher.

"I'd ask the people that would like it to please bring me a petition from the majority of people on the street that would like to have it changed to one-way traffic. I haven't been given that yet." 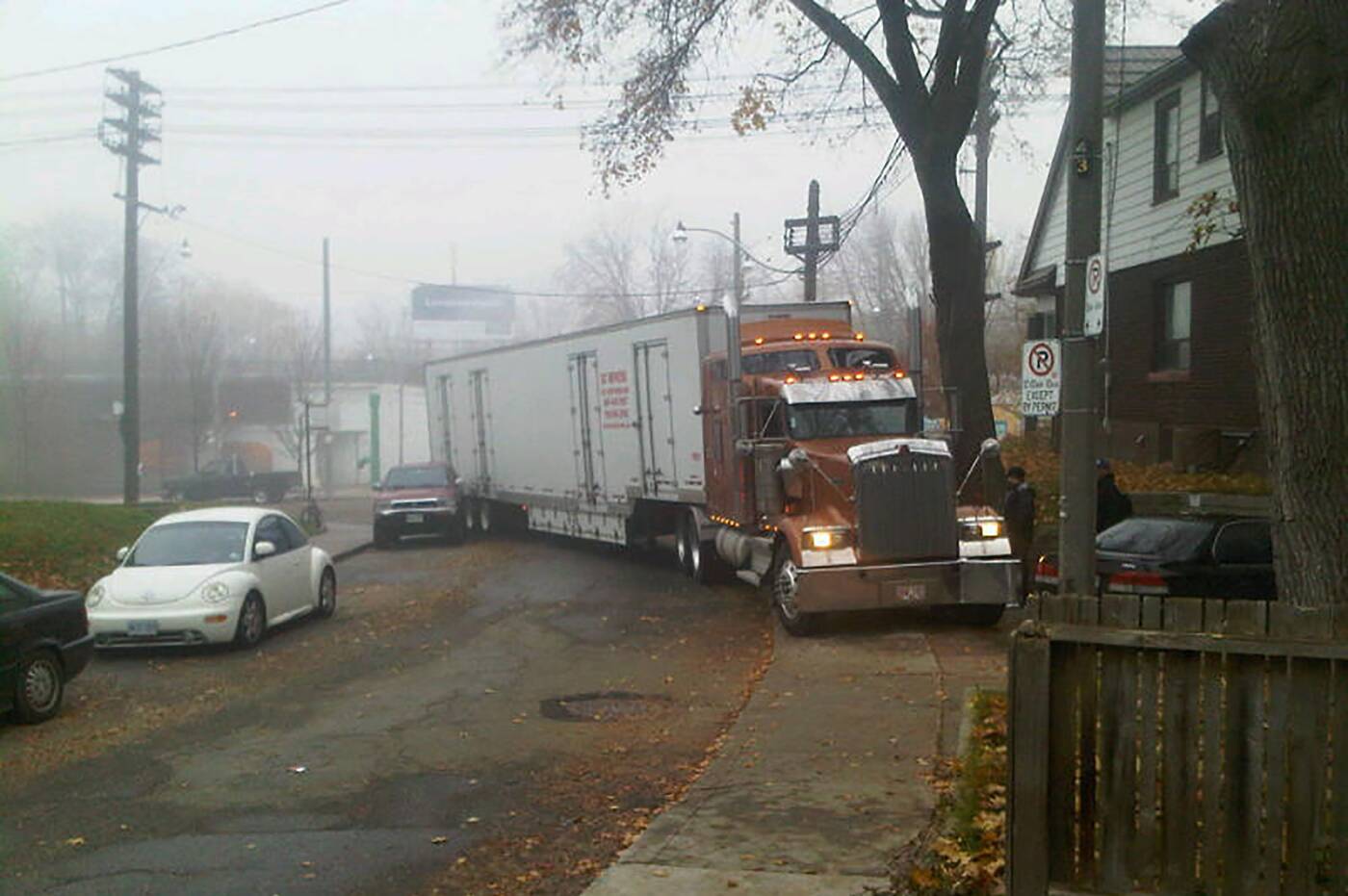 A truck stuck on the truncated Gerrard. Photo by Why Two Gerrards.

But why does this truncated, disconnected stretch of Gerrard even exist?

It's an interesting story going back over a century to when the Gerrard and Carlaw intersection was a confusing mess of road and rail, the smaller Gerrard being a remnant of the original alignment.

Gerrard was realigned in the 1920s to the route we know today, bypassing the short stretch of original alignment on a clean east-west axis.

This realignment may have solved one of the city's early traffic problems, but nobody bothered to rename the second Gerrard street that ran diagonally to the southwest of the main route. 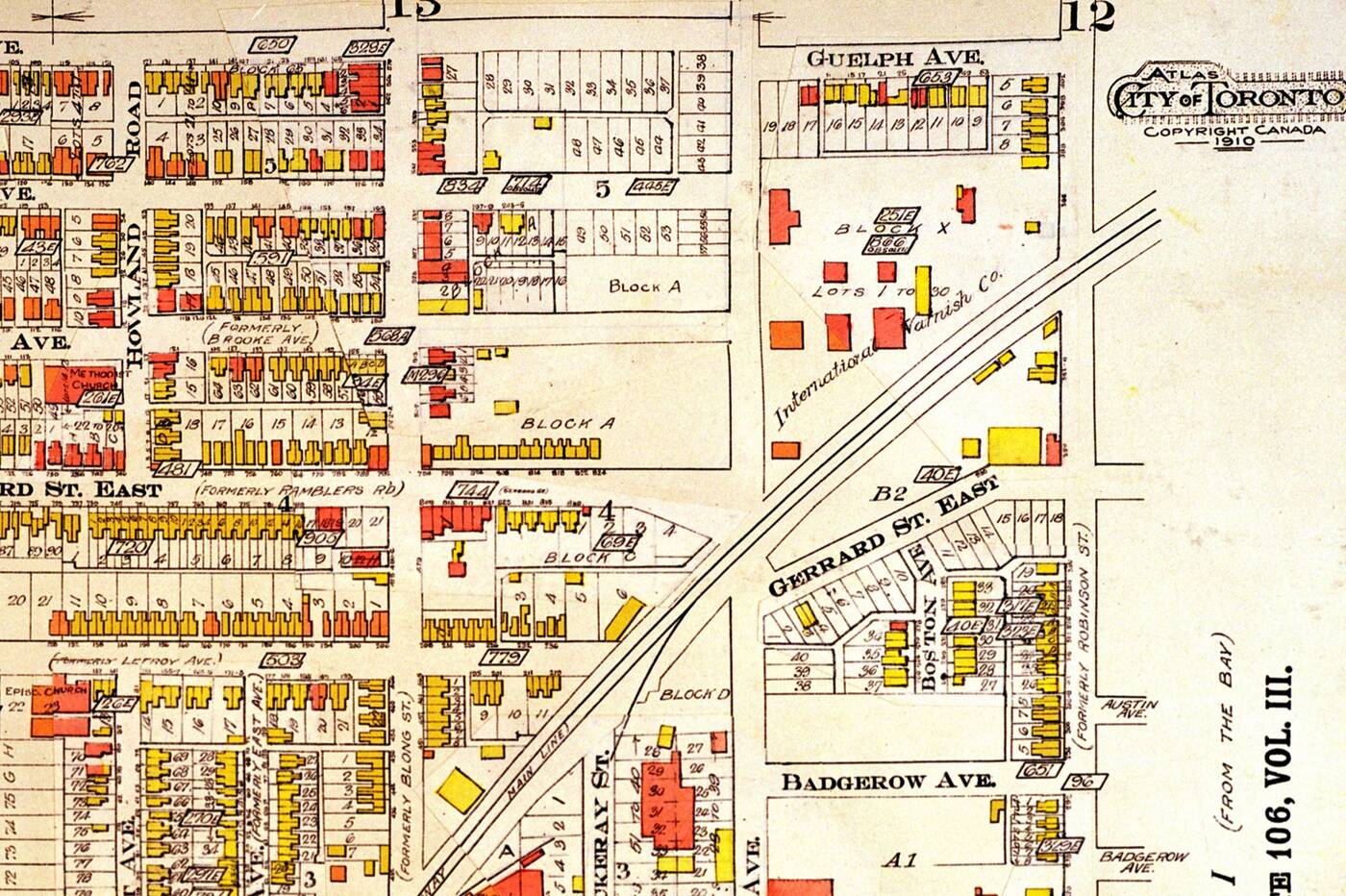 This configuration was less of a problem in the early days when the two Gerrards connected. The 2002 addition of a Transportation Services-owned parkette effectively closed off what was once the intersection of Gerrard and Gerrard. 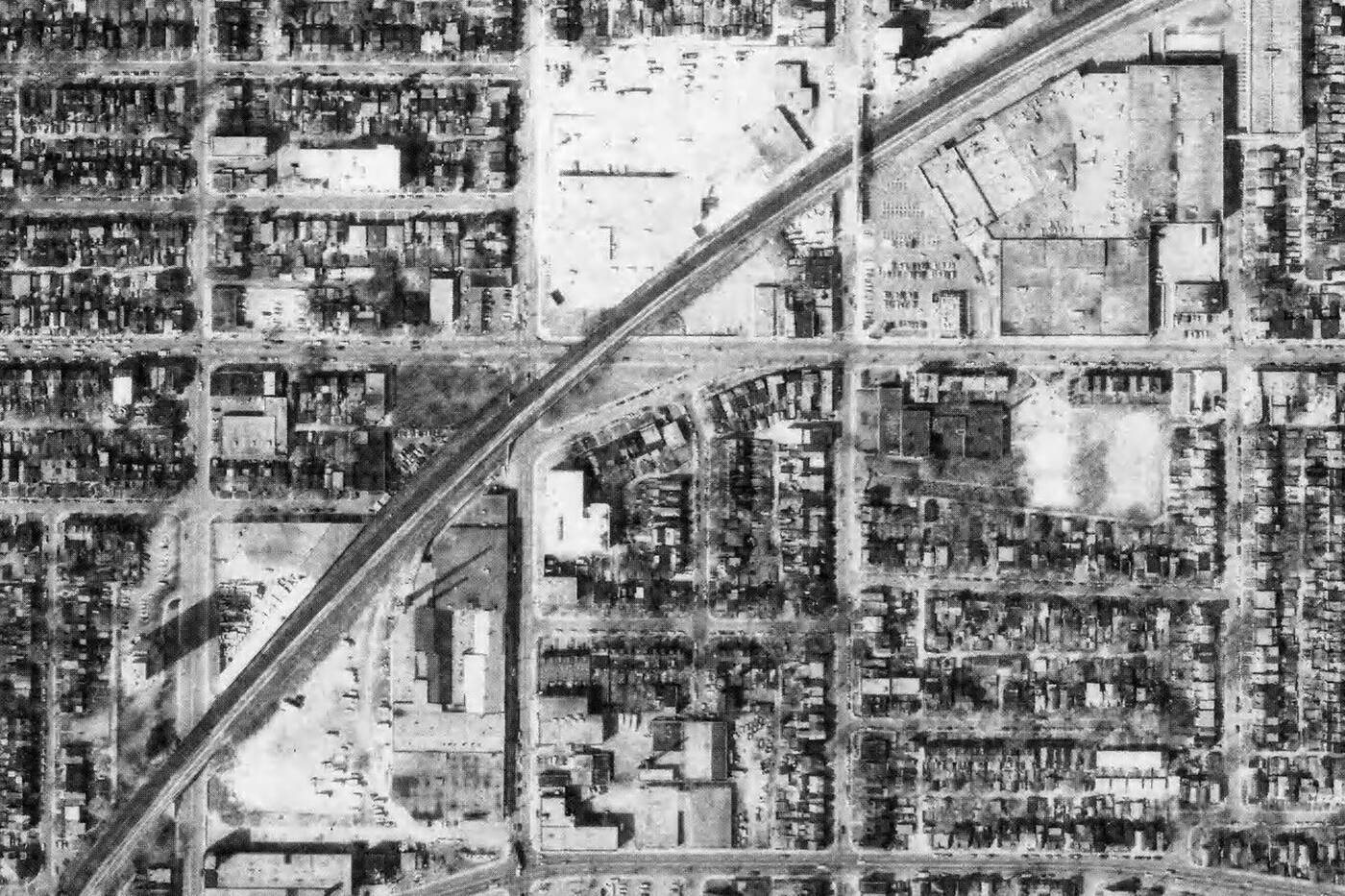 1992 aerial view showing the two Gerrards connecting, a decade before a parkette would divide the two, image via Toronto Archives

Ostensibly a move to calm traffic, vehicles making wrong turns have since been unable to continue along to their intended Gerrard Street, creating the problems that persist today.