Opened as a small airfield in 1929, Downsview Airport has grown from its earliest iteration as a rough airstrip to a WWII warplane manufacturing hub, then a military airbase, and most recently, a commercial aircraft testing facility.

Like the airport, the surrounding neighbourhoods changed with the years as Toronto’s insatiable demand for housing swallowed up rural lands and fueled the funding of transportation infrastructure. 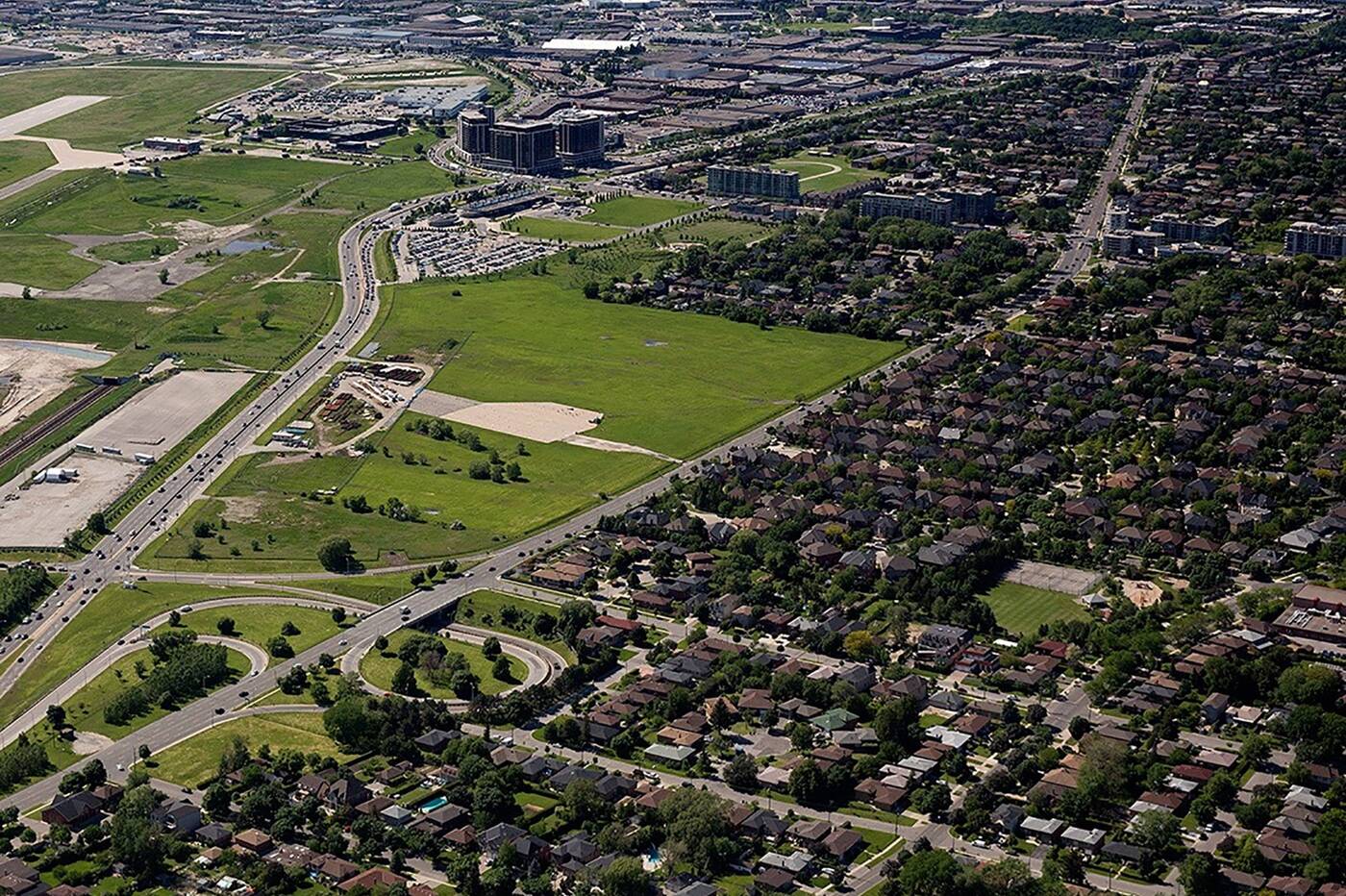 Am aerial view of the Downsview airport. Photo via CreateTO.

The declining needs of Downsview Airport and rising demands of local traffic have cultivated an interesting picture. A once-bustling stretch of runway has been sitting idle for a generation, cut off from the rest of the airport for almost four decades.

Known previously as Runway 09/27, the 3,164-foot/964-metre strip was built in 1947, part of an expansion by the Department of National Defence following its purchasing the airfield and adjoining land, growing to what would become RCAF Station Downsview.

Archival aerial photography from 1947 captures the east end of Runway 09/27, with Wilson Heights Boulevard running north/south along what was then the base’s east edge. 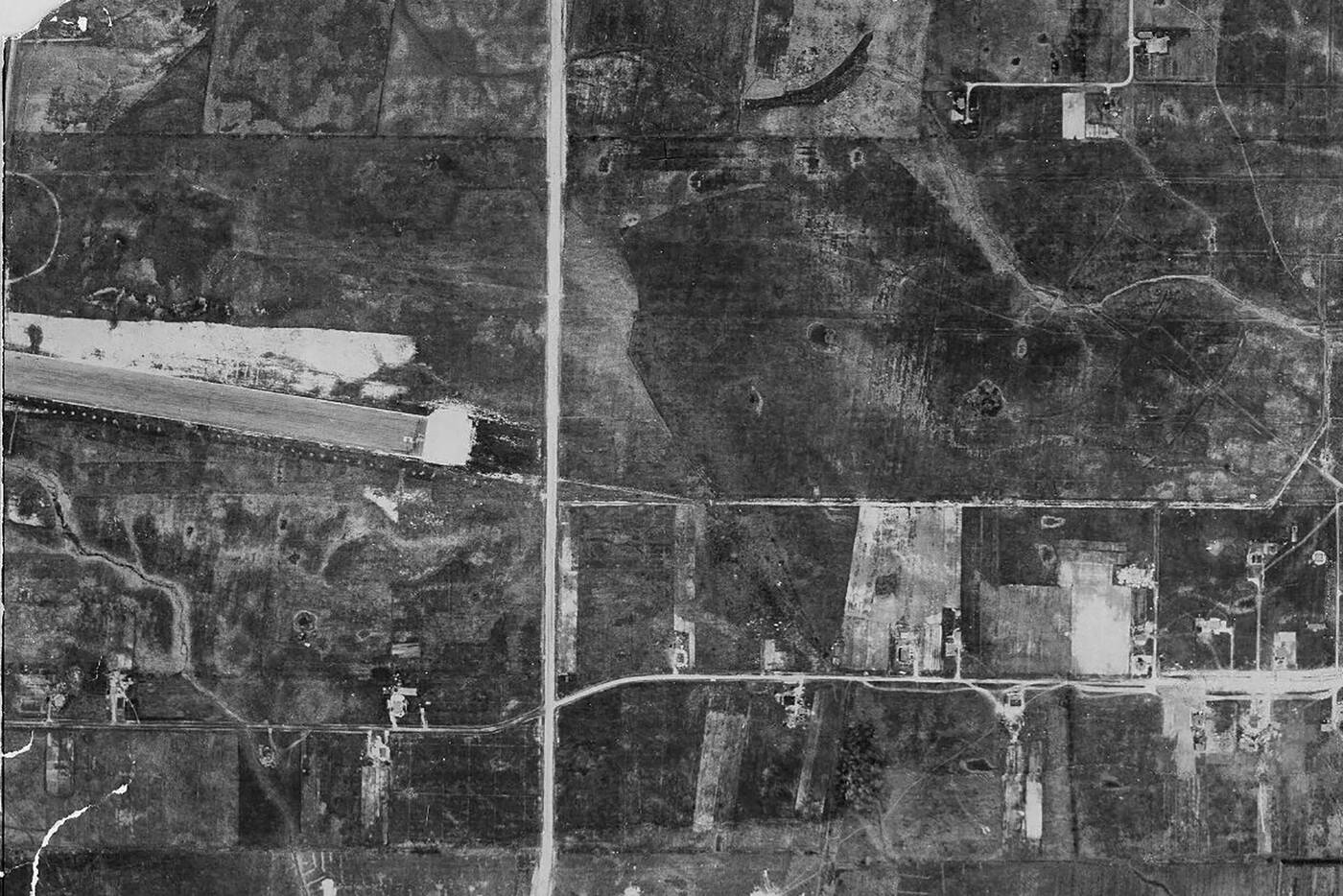 1947 aerial view showing the east edge of Downsview airport, with Wilson Height Blvd. running through the centre, image via City of Toronto Archives

For a short time after this expansion, Dufferin Street actually crossed the runway of an active military installation via a signalized intersection, foreshadowing what would come decades later.

This configuration was understandably inconvenient for the base and traffic passing through, and roads would eventually be diverted around the runways.

This rerouting resulted in the confusing, non-contiguous route of Dufferin Street we know today, which includes an abrupt ending north of Wilson, and a truncated stretch north of Sheppard that leads nowhere.

The same year the airport was upgraded, a seemingly unrelated move to address growing automobile use in Toronto would spell the beginning of the end for the newly-expanded runway.

In November 1947, the Toronto City Planning Board presented the City’s Civic Work Committee with a plan for two new highways, including what would ultimately become the ill-fated Spadina Expressway.

Originally intended to run from Front Street to St. Clair Avenue, the scope of the project expanded to city-wrecking proportions before a grassroots campaign aided by the voice of urban affairs icon Jane Jacobs helped kill the project.

The approved route into Downtown was scrapped in 1971, though a few sections have been built in the years since. The partially-built stretch between Lawrence and Eglinton — abandoned in the wake of the route’s cancellation — finally opened in 1976 after a local campaign. 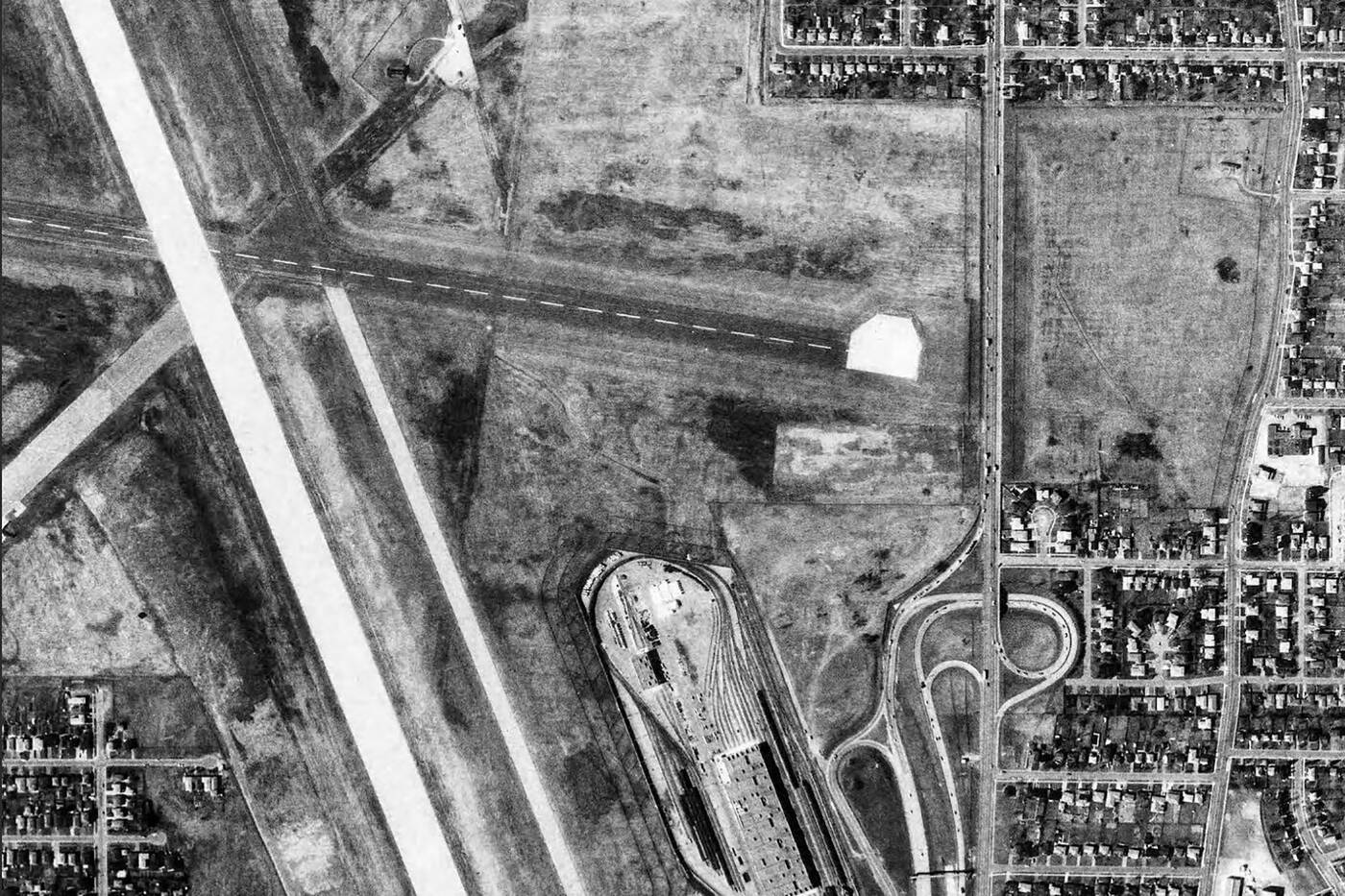 1981 aerial view showing the east edge of Downsview airport, with Wilson Height Blvd. running through the centre, image via City of Toronto Archives

Less prominent is the final phase of Allen Road, an at-grade five-lane road at the north end of the expressway, and the source of this unusual orphaned runway section.

This stretch of Allen Road from Clanton Park to Kennard was completed in 1982, linking the grade-separated expressway to the south with Dufferin Street to the north. And just like that, a part of Toronto’s rich aviation history was relegated to obscurity. 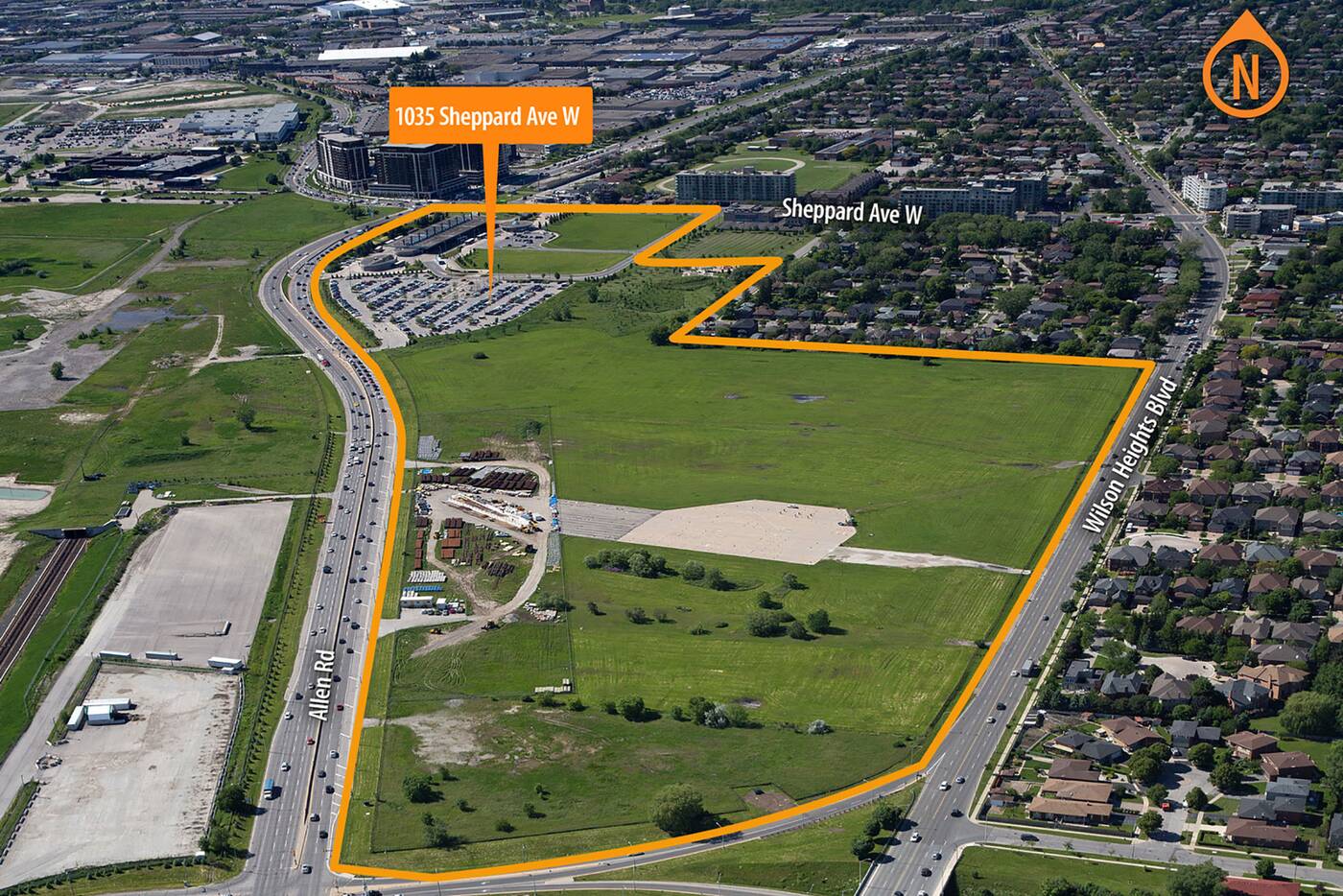 Looking northwest over the orphaned section of runway, image via CreateTO

What remains to the east is little more than a fenced-off strip of cracked, aging concrete surrounded by overgrown grass, inaccessible by pedestrians and hardly noticed by motorists speeding by on Allen Road.

Current views of the site reveal a mess of City-owned equipment, pylons, and a shelter structure. 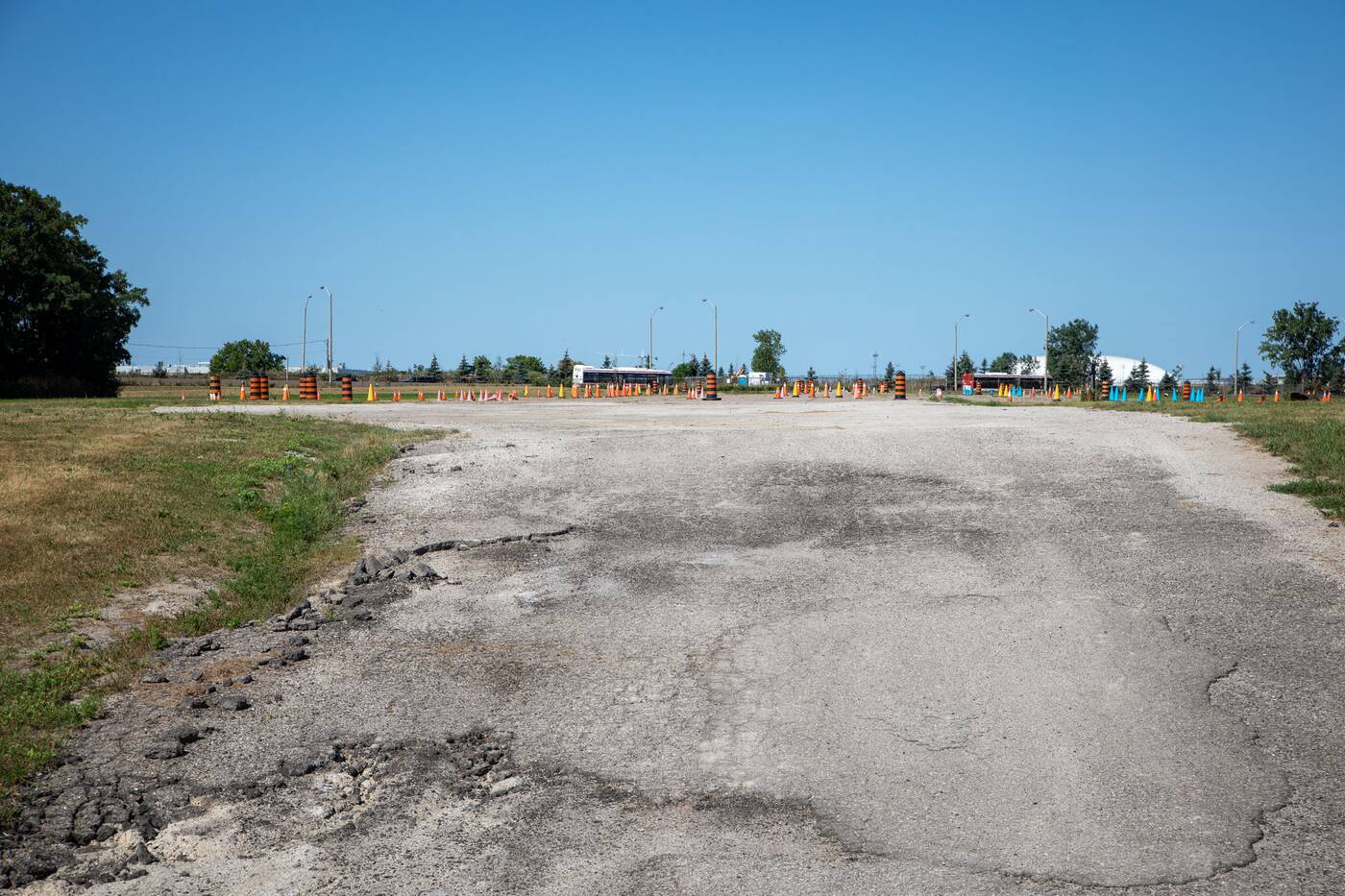 This relic of Toronto’s aviation past may not be around for long, as City of Toronto-managed real estate arm CreateTO pushes forward with plans to redevelop the site with much-needed affordable housing.

Other plans in the works for the west and north edges of the airport include concepts that preserve runway sections into new park space, a strategy that could be replicated here as well. 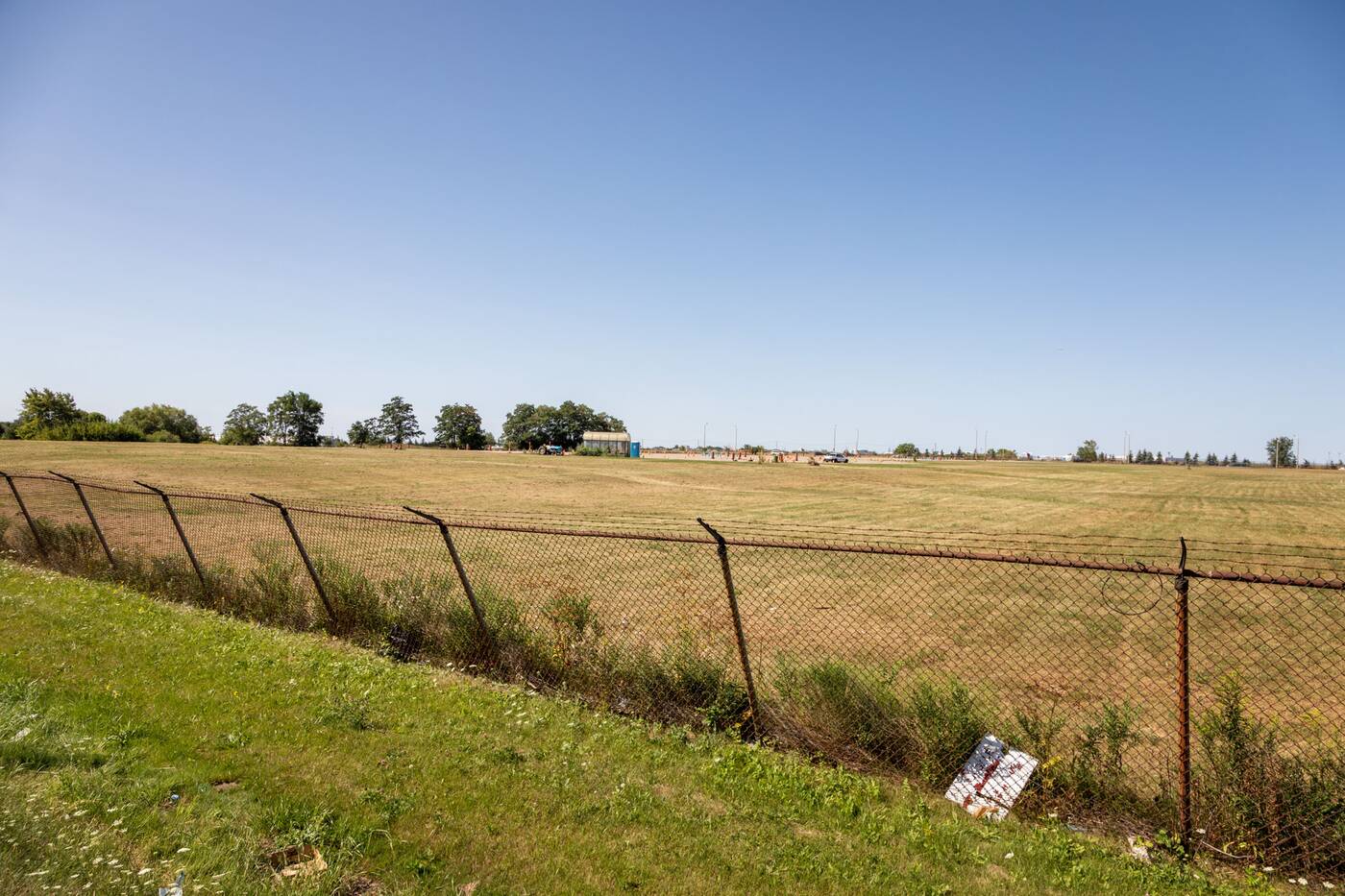 West of the extended Allen Road, other sections of the former runway within the Downsview lands have also been erased. The TTC Wilson Yard Complex was built just south of the runway in 1976.

With the runway out of commission, the TTC expanded their Wilson Yard north in 1996, erasing more of the runway to accommodate the subway's extension to the Downsview area.