9 arrested as Toronto kicks homeless people out of Alexandra Park

Activists, street health workers and members of the general public are livid today as the City of Toronto once again stages a massive operation to evict homeless people from a downtown park.

This time around, city crews have descended upon Alexandra Park at Dundas and Bathurst — a roughly 2.7 acre public space with its own pool, community centre, skateboard park, gardens, ice rink and playground.

As of Tuesday afternoon, the entirety of the park and even some spaces beyond have been cordoned off by orange fencing.

The area literally looks like a music festival with multiple "access points" and guards watching every gate. 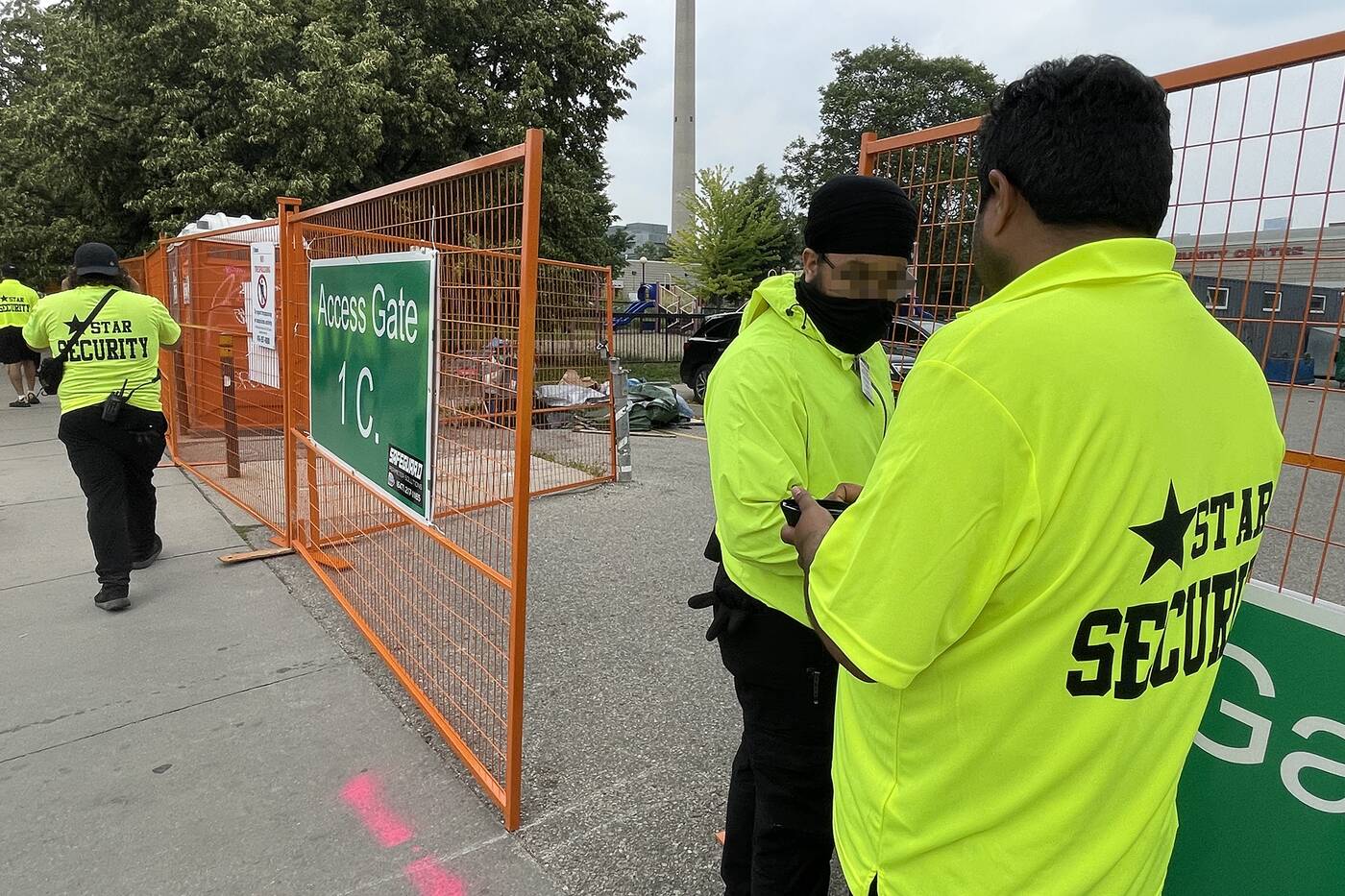 Unlike what happened last month at Trinity Bellwoods, where police and city staff controversially cleared out two large tent encampments, there aren't many protesters present — chiefly because there's nowhere for them to go.

The encampments are set quite a bit back from the road, but the city has erected fences right up to the sidewalk, giving crews ample unencumbered space to carry out what officials call the "restoration" of Alexandra Park.

In some cases, there are multiple layers of fencing to get through to reach the actual encampment site. 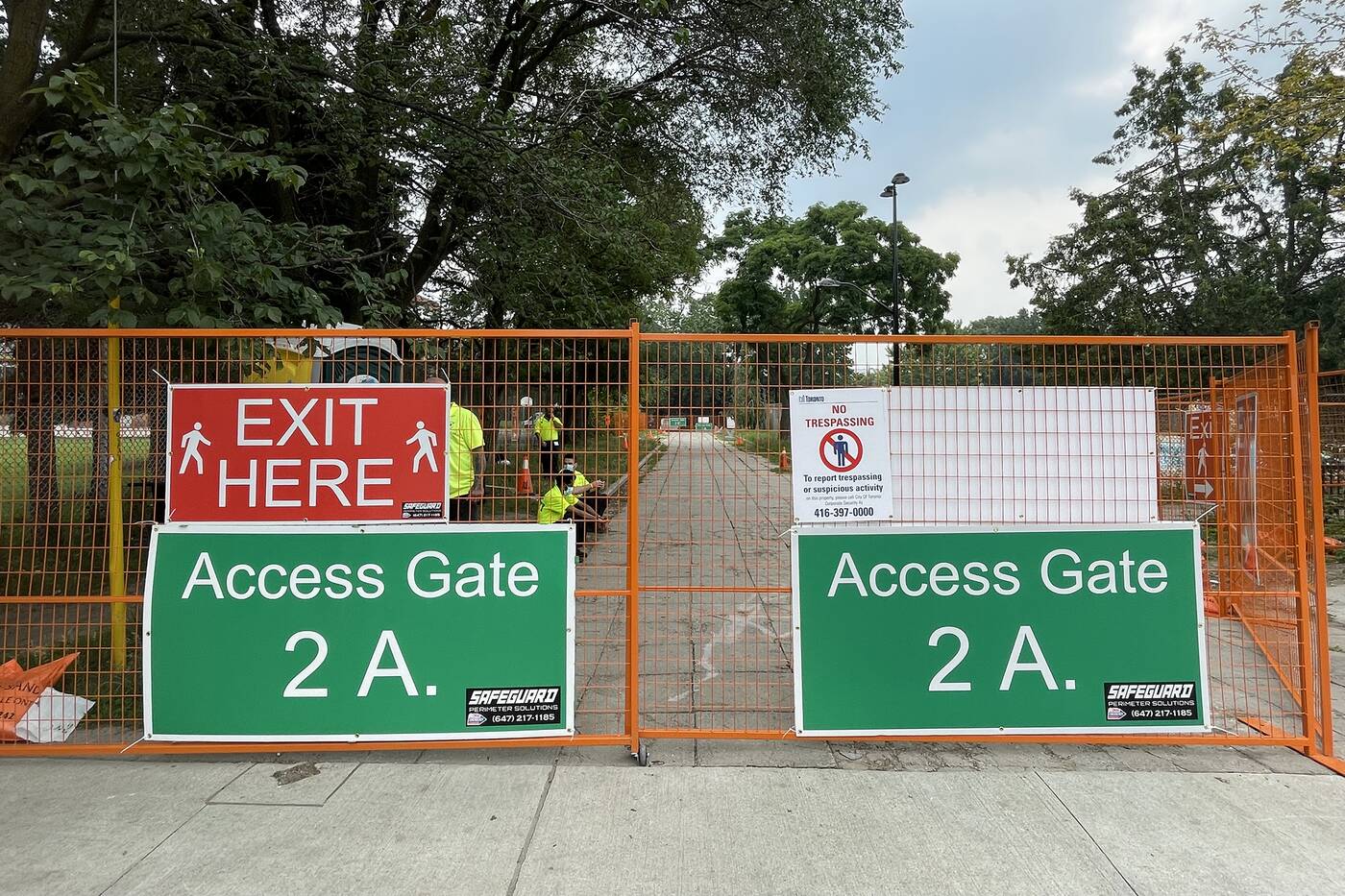 Alexandra Park is completely fenced off with no access to the public or media as city workers clear a homeless encampment - 📹 @laurenonline #Toronto #AlexandraPark pic.twitter.com/xSPm4yeeYt

At least one journalist was reportedly been arrested for trespassing this morning after entering the park to document the encampment's dismantling — an act that many are now arguing is a vital service.

Nine people were arrested in total before lunchtime, according to Toronto Police: one for public intoxication, one for an outstanding warrant, and seven for trespassing.

It is not clear how many of the people living in Alexandra Park are among this group, though the city did announce early Tuesday morning that officers would be onsite to begin "the enforcement of trespass notices that were issued at Alexandra Park on June 12."

Further updates from police regarding the number and nature of arrests are expected later Tuesday afternoon.

The City of Toronto wrote in a statement issued Tuesday morning that 28 to 35 people were living in Alexandra Park across an estimated 60 or more structures, some of them decidedly unsafe due to an increased risk of death from fire.

"There have been 130 fire events in encampments so far this year, including two in the past week. In 2020, [Toronto Fire Services] responded to 253 fires in encampments — a 247 per cent increase over the same period in 2019," reads the city's release.

The city stated when announcing the mass eviction (with zero notice) this morning that all individuals experiencing homelessness in the Alexandra Park encampment were being offered "safe, indoor space, with access to meals, showers and laundry, harm reduction, physical and mental health supports, and a housing worker."

"Occupants will be given time to pack two bags of belongings to take with them," explained the city this morning. "All other belongings will be collected and stored for up to 30 days for future pickup."

What wasn't stored or taken by inhabitants was picked up by dozers on Tuesday afternoon and tossed into large blue dumpsters.

Those dumpsters were subsequently loaded onto trucks and taken away filled with tents, furniture, debris and even some of Khaleel Seivwright's famous Toronto tiny shelters. 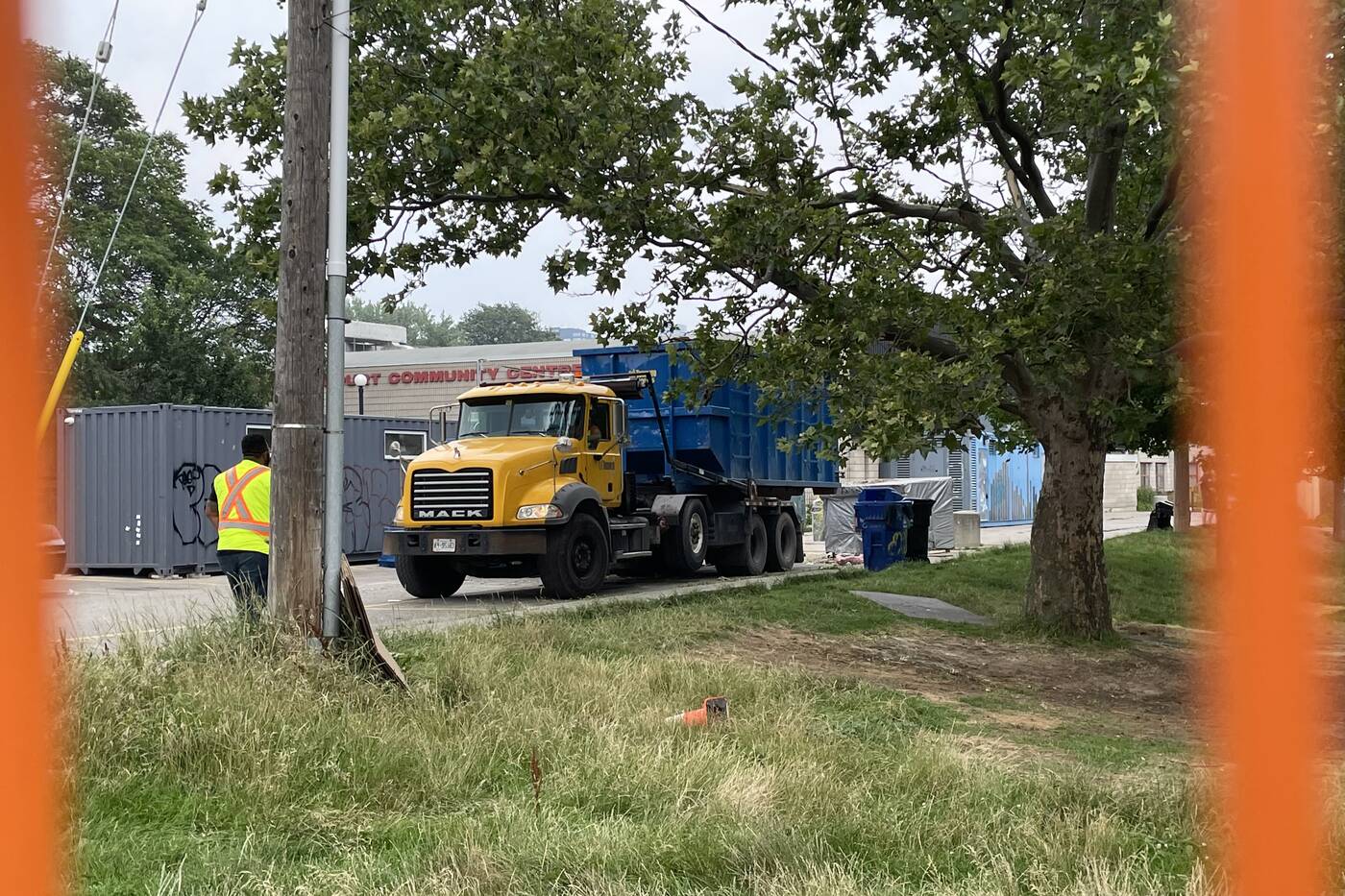 According to the city, seven of the 26 encampment residents found at Alexandra Park this morning accepted indoor accommodations. Another 19 left on their own accord.

It is not clear where those residents went or what happened to their stuff, though volunteers were seen earlier Tuesday helping some people move their belongings before security guards kicked them out of the park.

Private security guards remain stationed all around the orange fencing, just like they were (heck, still are) at Trinity Bellwoods Park.

City crews could be seen early Tuesday afternoon looking on while the construction machines did their work. Members of the Toronto Police Service were also on hand to supervise the operation.

Police are supervising as the City of Toronto uses machines to clear the homeless encampment at Alexandra Park - 📹 @laurenonline #Toronto #AlexandraPark pic.twitter.com/N9PTzN6ZGz

People experiencing homelessness have been living in tents and tiny shelters at Alexandra Park and other public spaces in Toronto since the COVID-19 pandemic first began, out of concern for their own health and safety amid a desperate shortage of shelter beds.

The city announced plans to begin the dismantling of four such encampments this spring, sparking a torrent of backlash and questions about the legality of booting homeless people from public parks (though it should be noted that, technically, under city by-laws, camping in parks is illegal).

So far, they've staged mass operations such as the one observed in Alexandra Park today outside Allan A. Lamport Stadium and at Trinity Bellwoods.

Moss Park is the only remaining park on the list and city officials have stated that they will be moving forward with plans to dismantle encampments at all four designated "priority sites."

Based on what happened with Alexandra Park today, it's unlikely that news crews, advocates for people experiencing homelessness, or even the park residents themselves will have any notice before police and city crews storm Moss Park to tear down tents.