The use of personal protective equipment has skyrocketed in efforts to control the spread of COVID, and that has meant plenty of extra litter on the streets of Toronto.

Environmental scientists, both 29, Justine Ammendolia and Jackie Saturno decided to do something about the face masks, gloves and disinfectant wipes they kept finding on their daily walks through their west end neighbourhood, last March.

Over the course of five weeks from last May to June, the couple visited residential areas, recreational trails, grocery store parking lots and the city's hospital district, picking up and tracking 1,300 pieces of PPE.

"We joked that we swapped in our Pride month for garbage picking," Ammendolia told blogTO.

Since completing the study – the first of its kind in Canada – they have picked up 6,000 more items.

That much detritus poses a massive environmental risk and also puts Toronto's wildlife at potential harm of ingesting or getting caught in masks or other pieces of PPE.

"We can't forget that this is an environment that we share and the last thing we need is a whole bunch of death traps for our animals," Ammendolia says.

Residential areas, hospitals, and grocery store parking lots, which Saturno describes as "a graveyard of PPE," showed to be the hot spots for this type of litter.

"We didn't expect to see piles of masks behind any of these big hospitals that are usually super tightly regulated," Ammendolia says. 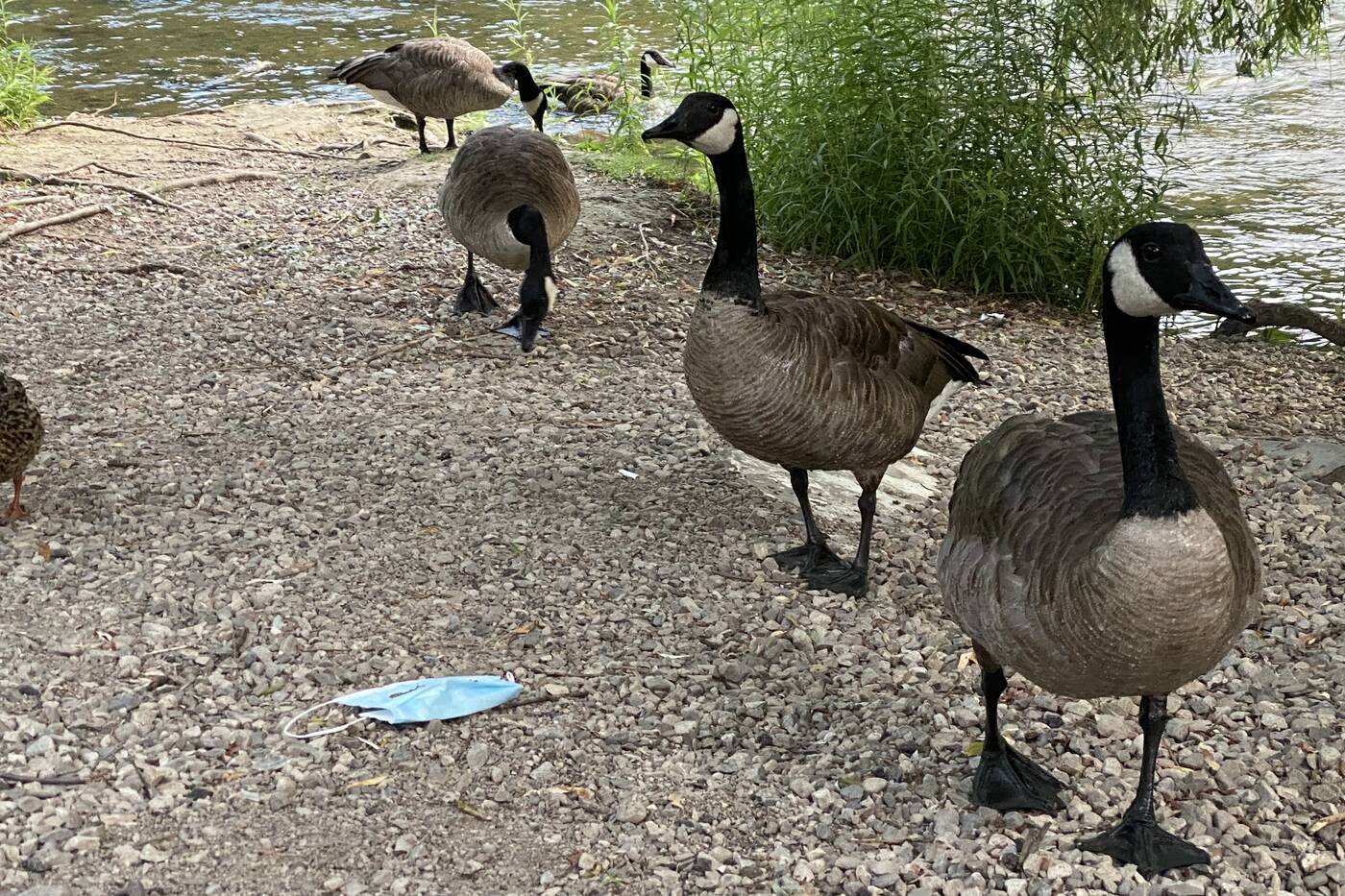 PPE litter puts Toronto's wildlife at potential harm of ingesting or getting caught in masks, gloves or wipes.

With PPE being a relatively new piece of litter in Canada since the start of the pandemic, Ammendolia and Saturno say it really boils down to a lack of education on how to safely get rid of these items.

"We've been told what we need to do to keep ourselves safe, with very limited messaging on the afterlife of any of it," says Ammendolia. "There's plenty of messaging around being nice to Joe on the TTC and wearing your mask, but nothing mentioned about when you're off the TTC and where to put it."

PPE is mostly completely non-biodegradable, meaning it'll likely outlast all of us, and if isn't thrown on the street, it's often erroneously put in recycling instead of being safely disposed of in a separate bag and put in the garbage. And that can contaminate entire batches of recycling.

Ammendolia and Saturno recommend switching out plastic masks with reusable ones and gloves with hand sanitizer in a refillable bottle.

Besides what we can do in our daily lives, they say there's still a lot of work at the provincial level needed in order to tackle this issue.

We're talking separate waste bins dedicated to PPE disposal around the city, as well as clear signage from big corporations like Loblaws and Walmart, so that litter is kept out of the parking lots.

"I mean, what we're doing with the removal part is cute, but it doesn't solve the problem at all, by any means," says Ammendolia.

"It needs to come out of production level, but it's also about demanding better quality materials that aren't going to be there two generations down the road, with people saying, 'Oh yeah, this was from a pandemic back in 2020.'"

Ammendolia and Saturno continue to clean up the streets of Toronto and are currently up for the Future Ground Prize by the David Suzuki Foundation for their efforts.