John Strachan was born in 1778 in Aberdeen, Scotland and educated at St. Andrew's University — a Presbyterian institution. He immigrated to Upper Canada (Ontario) in 1799, settling in Kingston.

In 1803, he converted to Anglicanism and became a priest. Appointed as the rector of the Anglican Church in Cornwall, he established a private school that eventually became the most important school in the town — educating the sons of some of the elite families in the province.

In 1812, he was invited to relocate to the town of York as rector of St. James on King Street East. He wasn't impressed with the offer, but finally accepted after Sir Isaac Brock included the position of chaplaincy of the garrison and also of the Legislative Council.

He moved to York in June 1812, about the same time as the United States Congress was preparing to declare war on Great Britain. Strachan was to play a leading role in events when the American troops invaded York in April 1813.

When Strachan arrived in York, he rented housing accommodations. Unfortunately, in February 1817, it was almost entirely destroyed by fire. Shortly after, he purchased an estate-lot on the west side of town. 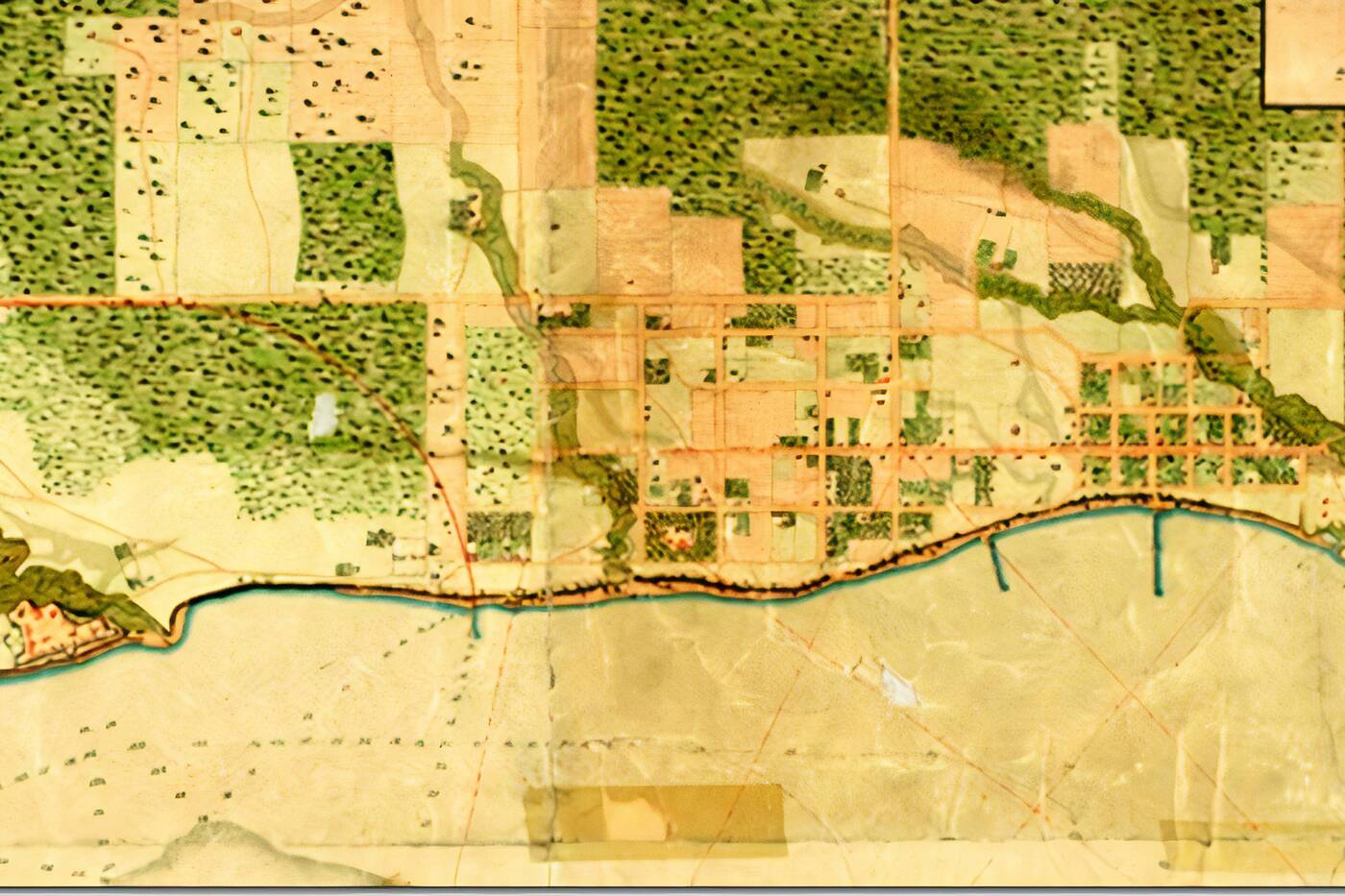 Map of the town of York in 1823, drawn by Lieut. The map shows three of Toronto's lost creeks, which were eventually filled in or contained within the sewer system. On the right side of the maps is Taddle Creek, in the centre is Russell,Creek and on the left is Garrison Creek. The large lot that John Strachan purchased was on Front Street, on the west side of Russell Creek, where it flowed into the lake near today's University Avenue (map from the collection of the Toronto Archives).

The property was bounded by today's York, Wellington and Front Streets, as well as University Avenue. Desirous of constructing a residence that was more resistant to fire, he contracted to have a brick house built.

Today, the site of the house is on the northwest corner of University Avenue and Front Street.

Built between the years 1817 and 1818, Strachan's home was among the first brick houses constructed in the town of York (Toronto). The house was in Georgian Style, similar to the Grange, which today is part of The Art Gallery of Ontario.

The Georgian style originated in Great Britain and was highly popular between the years 1750-1850. It was brought to Upper Canada by the United Empire Loyalists following the American Revolution.

These immigrants had remained loyal to the Crown and wished to reflect British traditions in their architecture, even if it were a log cabin. In the United States, the style evolved into the Adam (Federal) style, as the new nation shunned English terminology.

Construction on Strachan's house commenced in 1817 and was completed by the end of the following year. Its south facade possessed 12 large rectangular windows, plus an added semi-circular fanlight (transom) window above the set of double doors. 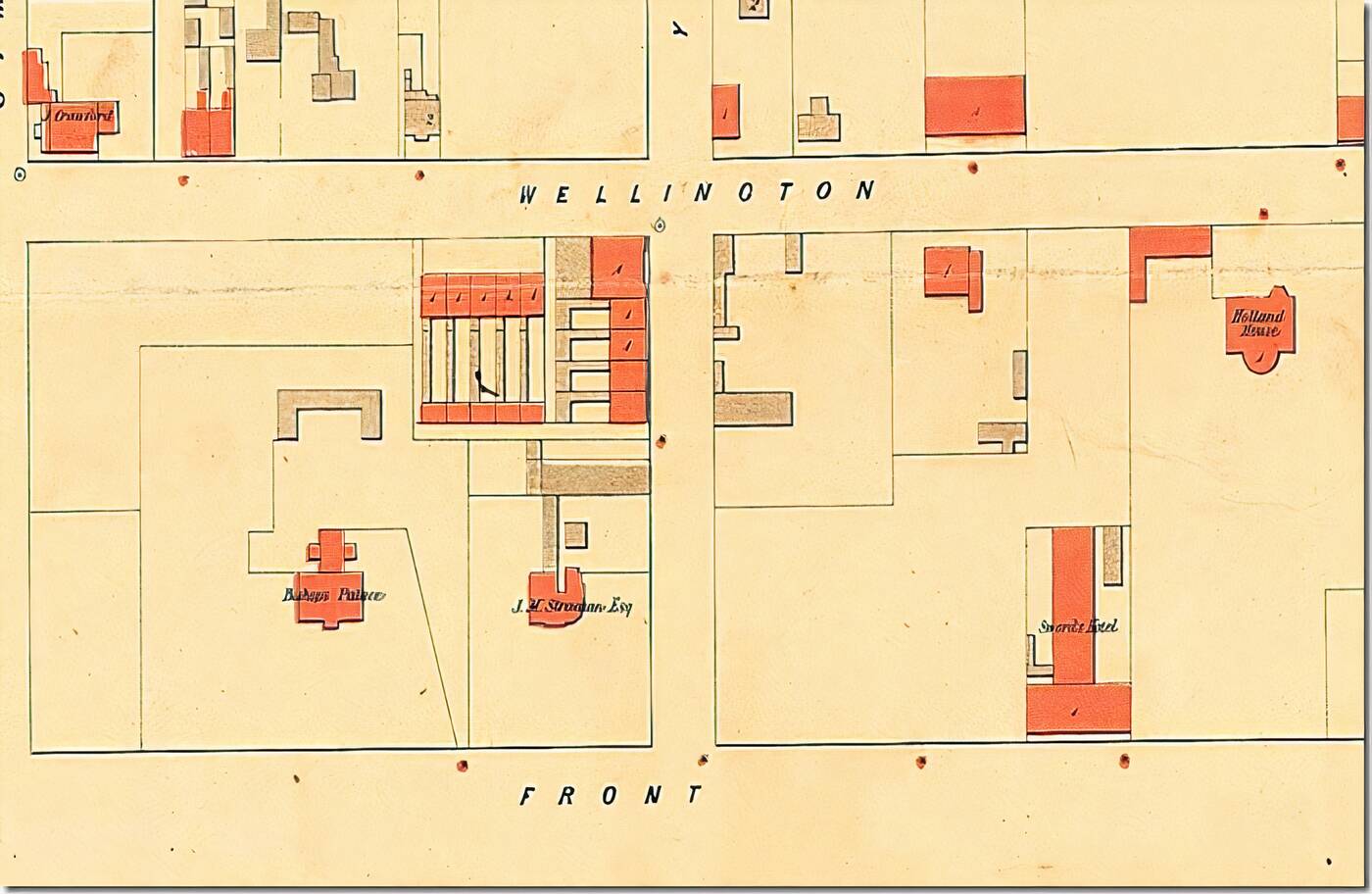 This 1858 map of Toronto depicts the Bishop's Palace on Front Street, and a house on the east side of the Palace. It was the home of Strachan's son-in-law, which was later occupied by his son, James M. Strachan Esq. The lots that were divided and sold in the 1840s by James are shown on the map on the northeast corner of the estate. Map from the Toronto Public Library.

This window allowed daylight into the centre hallway that contained the grand staircase to the second floor. The drawing room (parlour) and dining room were on opposite sides of the centre hall.

There was another semi-circular window in the triangular pediment above the second storey. The porch was in the Greek Doric style.

The symmetrical south facade was impressive with a commanding view of the harbour. Its design was orderly, traditionally British and dignified — reflecting the ideals that Strachan strived to emulate.

However, despite Strachan's importance within the community, the remuneration he received as a clergyman was not generous.

Strachan was appointed the first Anglican Bishop of Toronto in 1839, and the house became the Bishop's Palace. 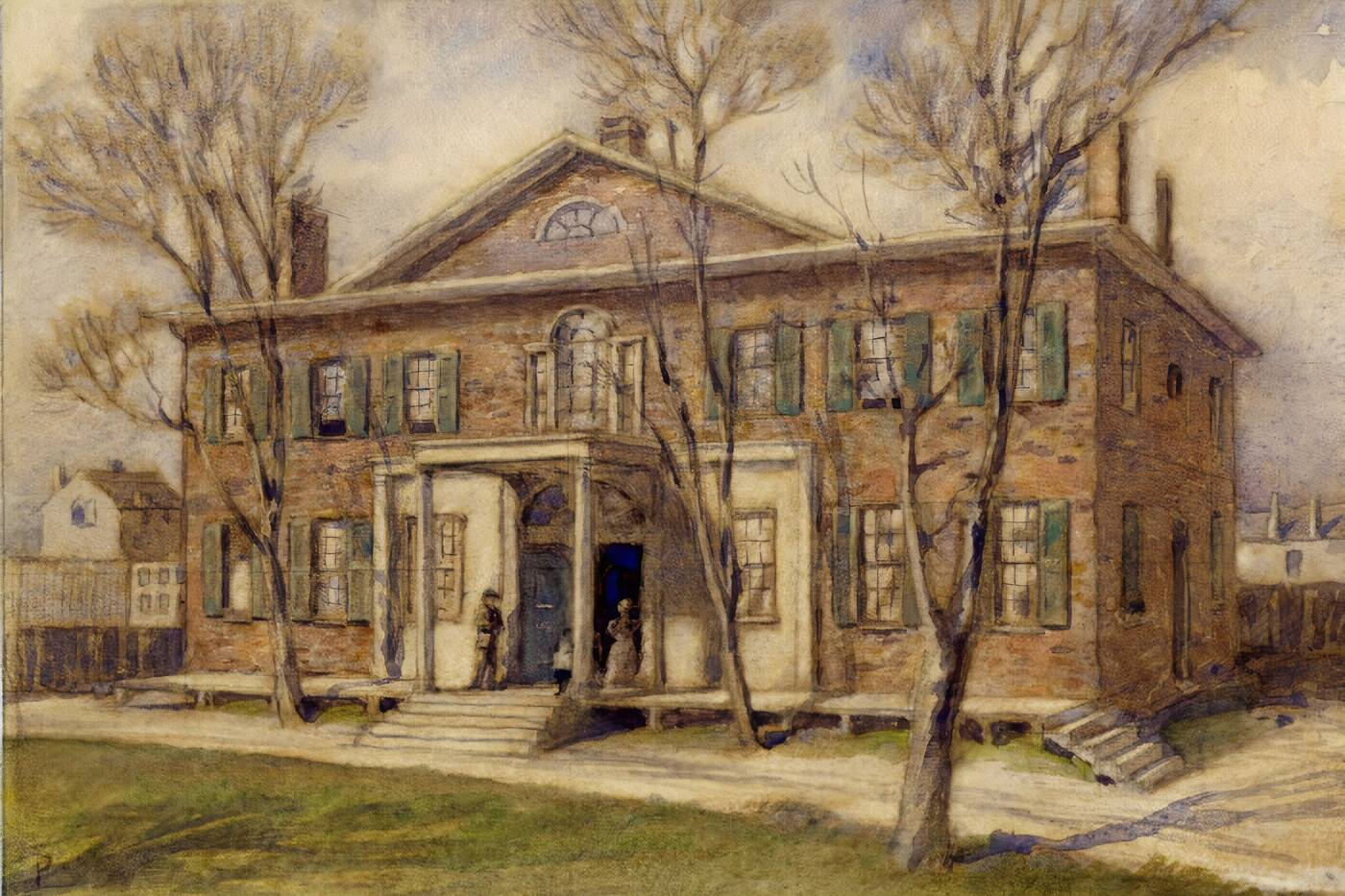 Pen and ink drawing based on a photograph of "The Palace" from 1885. Photo from Toronto Public Library.

Although it was not an exaggeration to refer to it as a palace, if compared to other homes in York, the term actually denoted that it was the official residence of a bishop.

To refer to a bishop's residence in this manner was customary in both the Anglican and the Roman Catholic Churches.

Some people in York expressed the opinion that when Strachan built his house in 1817, he purposefully constructed an impressive structure in anticipation of eventually being appointed a bishop.

In 1832, Strachan gave property on the east side of his estate to his son-in-law, Thomas Jones, who built a house for him and his wife.

The house was later occupied by Strachan's eldest son James, who in the 1840s, sub-divided a portion of the northern part of the estate to create building lots to generate funds.

John Strachan died on November 1, 1867. His funeral procession was one of the largest that the residents of Toronto ever witnessed. 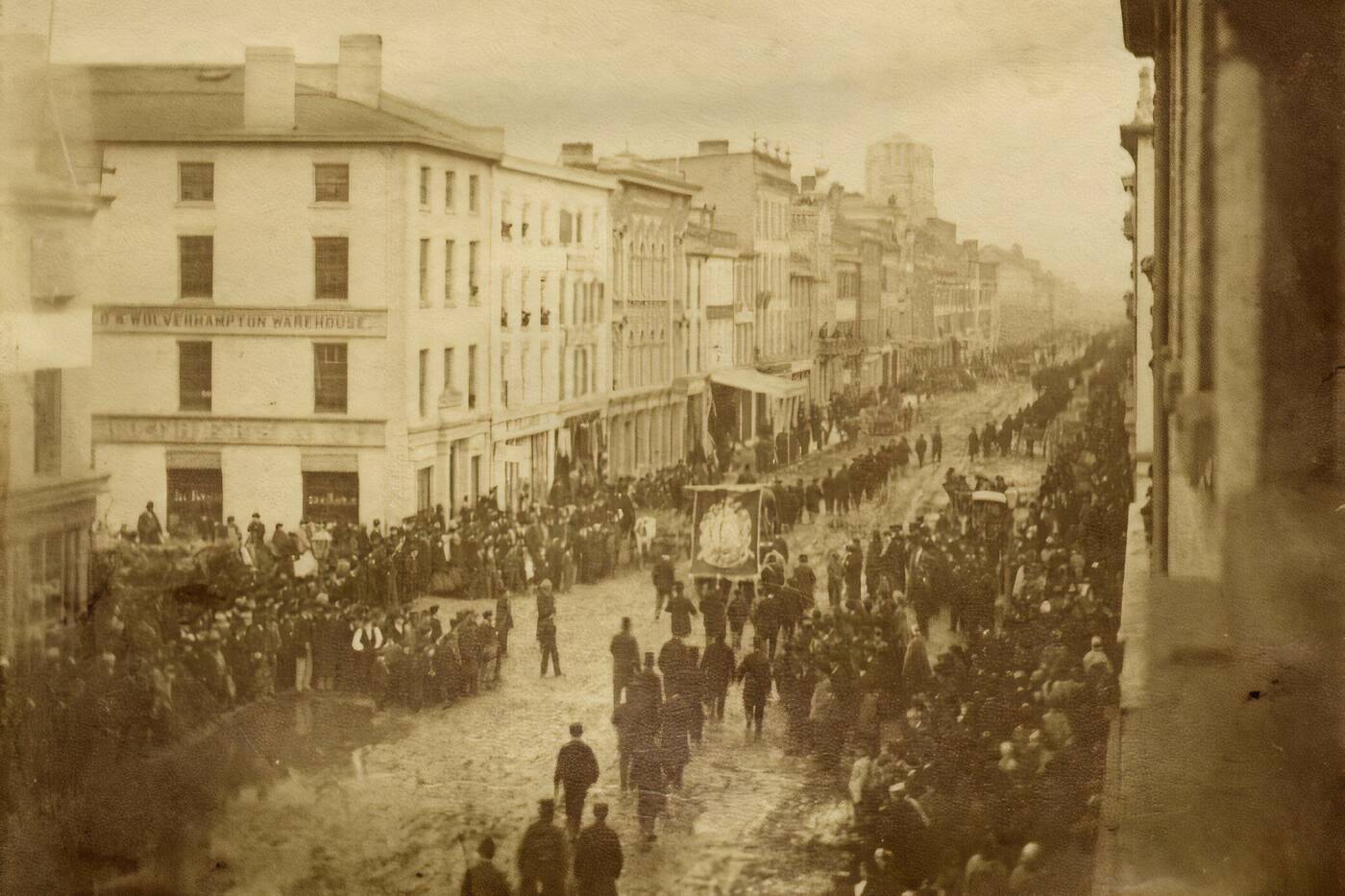 He was buried beneath the high altar in St. James Cathedral on King Street East. A brass plaque was placed over the internment site, and today, sunlight from the stained-glass windows in the sanctuary continue to reflect from its shiny surface.

Sir John Carling purchased the residence, but the area had by now deteriorated as landfill had pushed the lake further south to accommodate the construction of the rail lines.

Carling rented the house to various tenants and it became known as the Bishop's Boarding House.

Though the property on Front Street was no longer desirable for residential purposes, property prices continued to increase as it was ideal for commercial buildings. 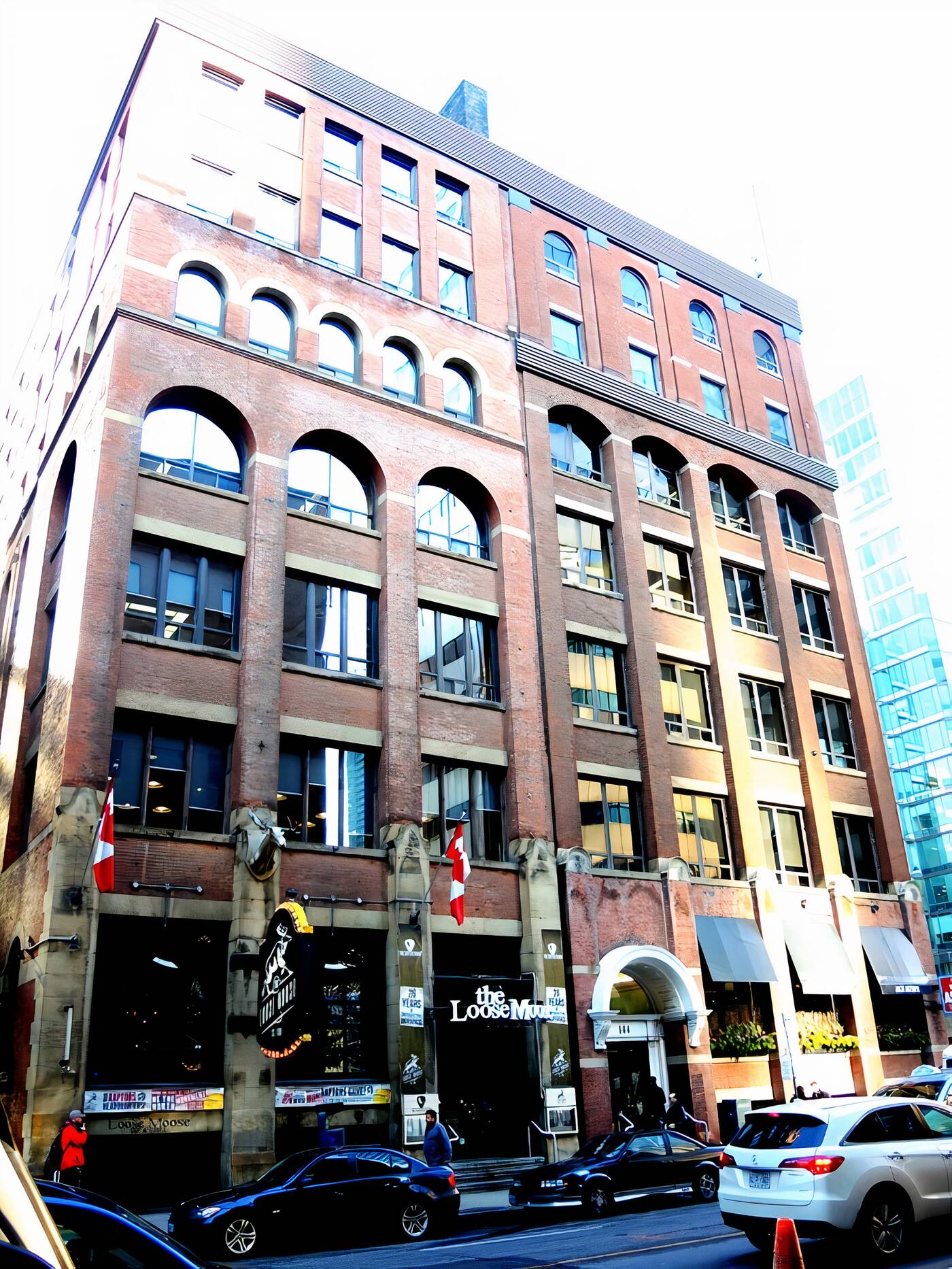 Building that today occupies the site of the Bishop's Palace, on the northeast corner of Front and University Avenue. Photo from Doug Taylor, taken on December 16, 2015.

The house was sold and demolished in 1890, and a seven-storey building erected on the site.

Doug Taylor was a teacher, historian, author and artist who wrote extensively about Toronto history on tayloronhistory.com. This article first appeared on his site on December 18, 2015 and has been republished here with the permission of his estate. The article has been modified slightly.