Residents of a Toronto neighbourhood say they've been blindsided by Metrolinx's plans to build a new subway system beneath their homes.

The Yonge North Subway Extension will extend Line 1 of the TTC eight kilometres from Finch up to Richmond Hill.

What that route looks like exactly has yet to be determined. Two options originally proposed include subway trains moving northward in a relatively straight path, following Yonge Street.

But the latest proposal, dubbed Option 3, has enraged homeowners in Royal Orchard, an affluent community on the edge of Markham and Thornhill.

Say “NO!” to Metrolinx’s plan to tunnel the Yonge North Subway Extension under homes through #Thornhill’s Royal Orchard neighbourhood. Sign the petition and have your say: https://t.co/Th6tjNYguz

This newer proposal would see Line 1's extension divert east off of Yonge Street, running underground just north of Royal Orchard Blvd., taking it beneath homes in the community, and re-emerging above-ground near the Holy Cross Cemetery.

The line would include four stations: Bridge, Clark, Steeles, and a fourth, which is still being determined.

According to a Metrolinx press release, Option 3 would be cheaper and built faster than other options by minimizing excavations, in turn "reducing inconveniences to neighbouring communities."

But the Royal Orchard community is up in arms. So far, more than 1,100 people have signed a petition started by Markham councillor Keith Irish to stop Option 3 from happening.

The Stop Option 3 Committee and the Royal Orchard Ratepayers Assocation has already raised over $13,000 for media campaigns, lobbying and legal fees.

There's also a rally planned for May 15 along Yonge Street to raise awareness about the extension.

"It felt like a bomb was dropped on our head," says Janice Cardinale, a spokeperson for the residents' committee.

"I feel like they’ve invaded our human rights. They had a responsibility to talk to us about it."

Cardinale, who has lived in the Royal Orchard community for a decade, says the community wasn't directly informed until April 7 about the new route. Metrolinx's Initial Business Case, which expands on Option 3, was released on March 18. 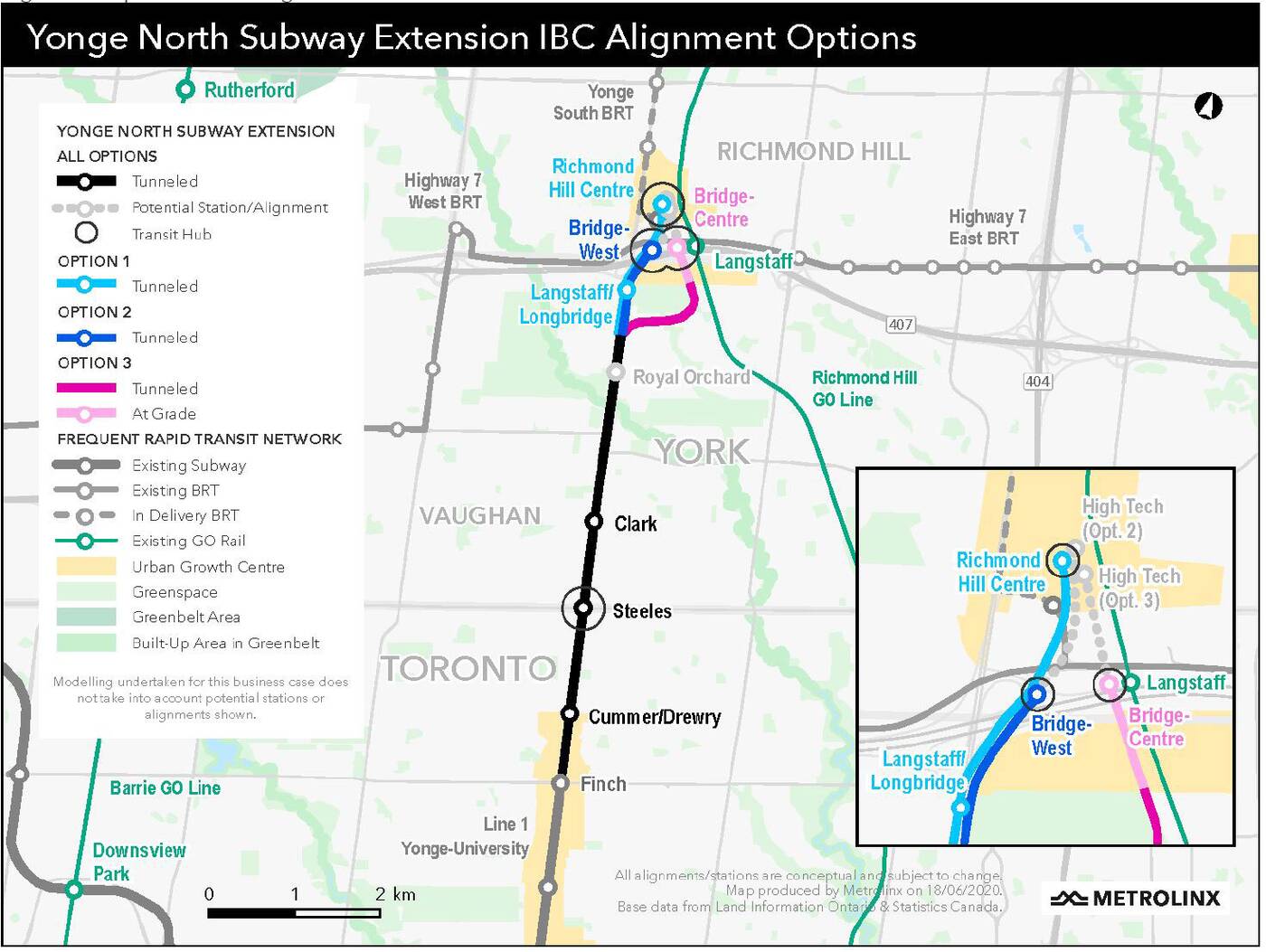 Metrolinx's Option 3 route (in pink) would divert off of Yonge and through the Royal Orchard community. Photo via Metrolinx's Initial Business Case.

Fears about noise, the potential demolition of homes to make way for the subway, and a construction process that is estimated to take seven years at least, has exacerbated concerns about living in the neighbourhood, with fingers pointed at how LRT construction has impacted the livelihoods of residents and businesses along Eglinton.

But they're most concerned about the tunneling, says Cardinale.

"We were presented with Options 1 and 2. Everyone was in agreement in the neighbourhood and all of a sudden Option 3 is going to pass," says Cardinale.

According to Metrolinx, they have no intention to move forward with Option 3 without making sure residents aren't affected by noise and vibrations when the extension is up and running.

Reinforced concrete tunnels will be at least 14 metres below the surface of the Royal Orchard community, Metrolinx spokeperson Scott Money tells blogTO.

"That’s deeper than many sections of existing subway lines in Toronto and deep enough to avoid any direct impacts to homes above, during and after construction," says Metrolinx.

The agency says it will continue to consult with the Royal Orchard community on the $5.6 billion plan.