The Cawthra Family immigrated from Guiseley, Yorkshire, England and arrived in Upper Canada (Ontario) in 1803. They lived in a brick house on the northwest corner of King and Caroline (Sherbourne) Streets.

The following year, head of the family Joseph Cawthra was granted land in Port Credit, but remained there only until 1806, when he relocated to York (Toronto), the provincial capital.

He had once hoped to be a doctor, and because of his interest in medicine, he established an apothecary that he expanded into a general store. It is thought to be the first store of its type established in Toronto.

When the War of 1812 was declared, he sold medical supplies to the British army and amassed a considerable fortune, which he invested in acquiring property.

Joseph’s son, William, inherited the business when his father died in 1842. He closed the shop and concentrated on developing the plots of land in downtown Toronto that had been part of his inheritance.

He lived in a brick cottage near Bloor and Jarvis streets, which at the time was outside the city, in the village of Yorkville. In 1849, William married Sarah Crowther.

She considered Yorkville too far north of the city, and urged William to build a home near the commercial heart of downtown Toronto.

She wanted a grand mansion that would be their home, and contain an office where her husband could conduct his business transactions. 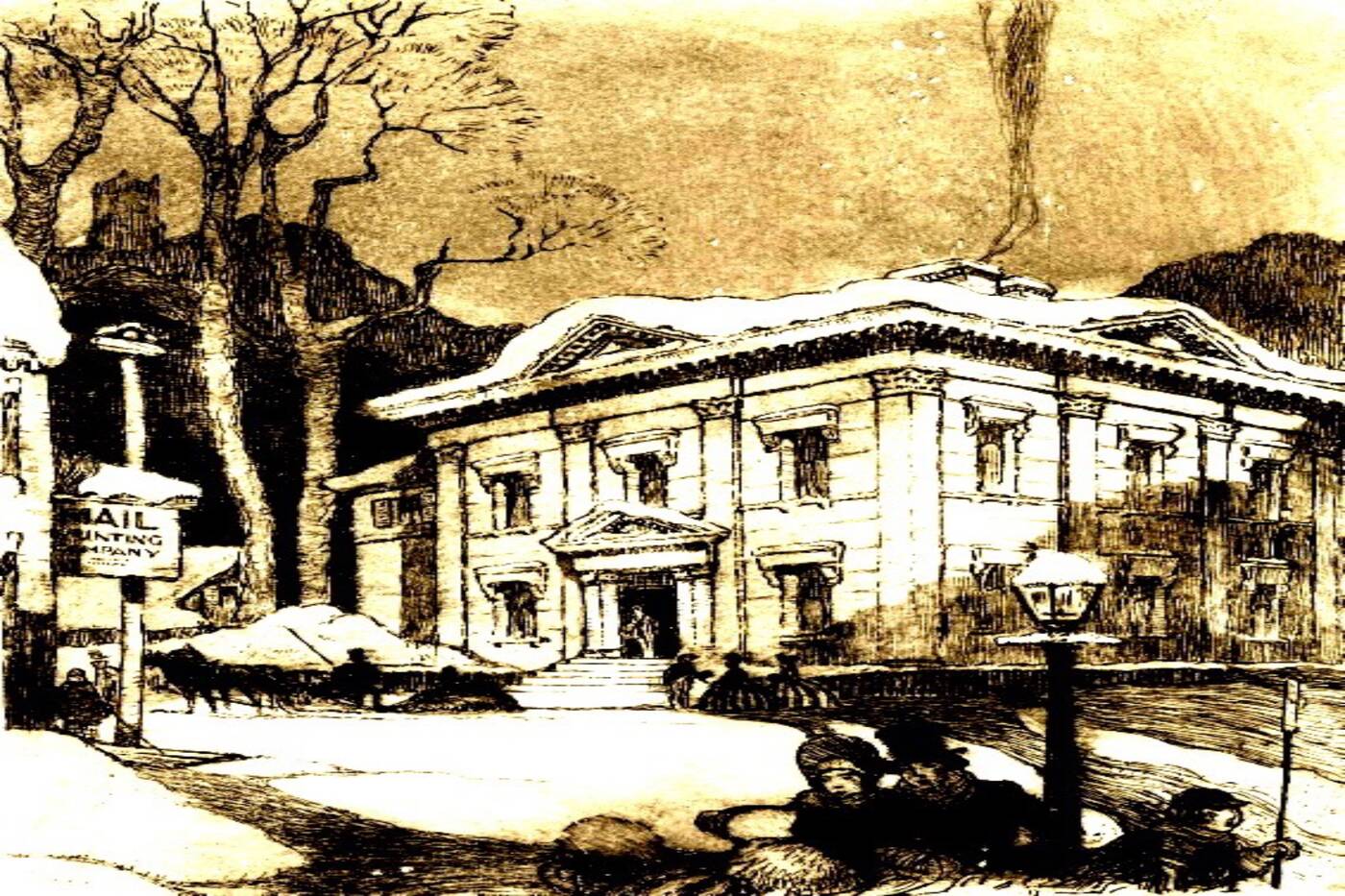 A sentimental Christmas card of the Cawthra House, printed in 1922, depicting the house when it was occupied by the Cawthra family. Toronto Public Library, r- 2132.

In 1851, William purchased a lot on the northeast corner of King and Bay streets. It took up 56 feet on King and extended 146 feet north on Bay.

William was aware that the area west of Yonge Street was developing commercially and that his new house would increase greatly in value. Construction began in 1851, but was not completed until 1853.

Though Cawthra was thrifty by nature, he acceded to his wife's wishes and built a residence that reflected his wealth and prominence within the city. Twice he had been elected an alderman on city council and had also served on the Board of Trustees for the Common Schools.

To design his home, he selected an aspiring architect, Joseph Sheard, who at the time was earning his living mostly as a carpenter. However, the structure was completed by a younger partner in the firm, William Irving.

The home was in the Greek Revival style, the walls constructed of large blocks of light-coloured Ohio sandstone, fitted together to form smooth facades. 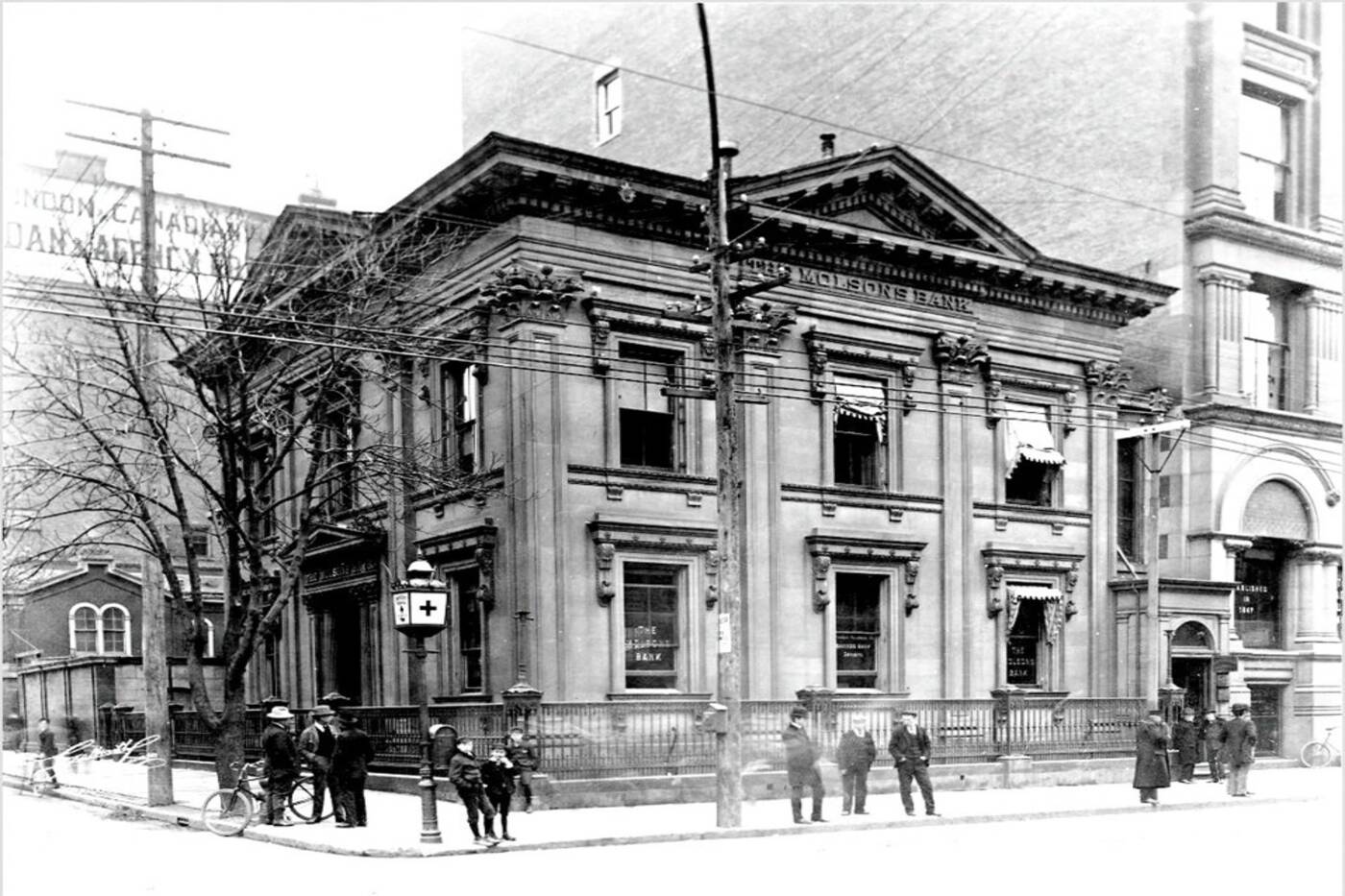 The Cawthra House in 1913 when it was the Molson’s Bank. The view is of the building’s south facade on King Street, with Bay Street on the left. The building to the east of the bank (right) is the Canada Life Assurance Company. Toronto Archives, S 0409, item 0060.

The frame and roof of the house were of hand-hewn-timbers, held together with wooden pegs. The windows and main doorway on Bay Street were surrounded by carved detailing that was richly ornate.

The heavy cornice above the second storey protruded over the street, creating a solid and impressive appearance. The triangular pediment above the cornice added to its resemblance to a Greek temple, with both the cornice and pediment displaying large dentils.

These were designs from ancient Greece that were highly popular throughout most of the 19th century. The facades on King and also on Bay were divided into three sections by pilasters (three-sided columns), topped with Corinthian capitals.

The house was essentially rectangular, with a service wing extending on the north side where the brick stable was located. The mansion was surrounded by a high brick wall. William lived in his sumptuous residence until he died in 1880.

Despite it being one of Toronto’s grandest mansions, no photographs seem to survive of its interior. There is an unconfirmed story that the front door of the house possessed a gold doorknob that the butler removed each night before dark to prevent it being stolen.

His widow remained in the house until about 1885 and then moved to a more luxurious home on Jarvis, opposite a small park that was named after the family. She rented out her former residence.

By this year, the land on King Street, where the house stood, was among the most desirable commercial locations in the city, too valuable to remain as a residential property.

From 1885 until 1907 it was a branch of the Molson’s Bank and from 1908 to 1925, the head offices of the Sterling Bank. The rich detailing on the exterior and the marble-trimmed interior reflected the image that the banks wished to portray. 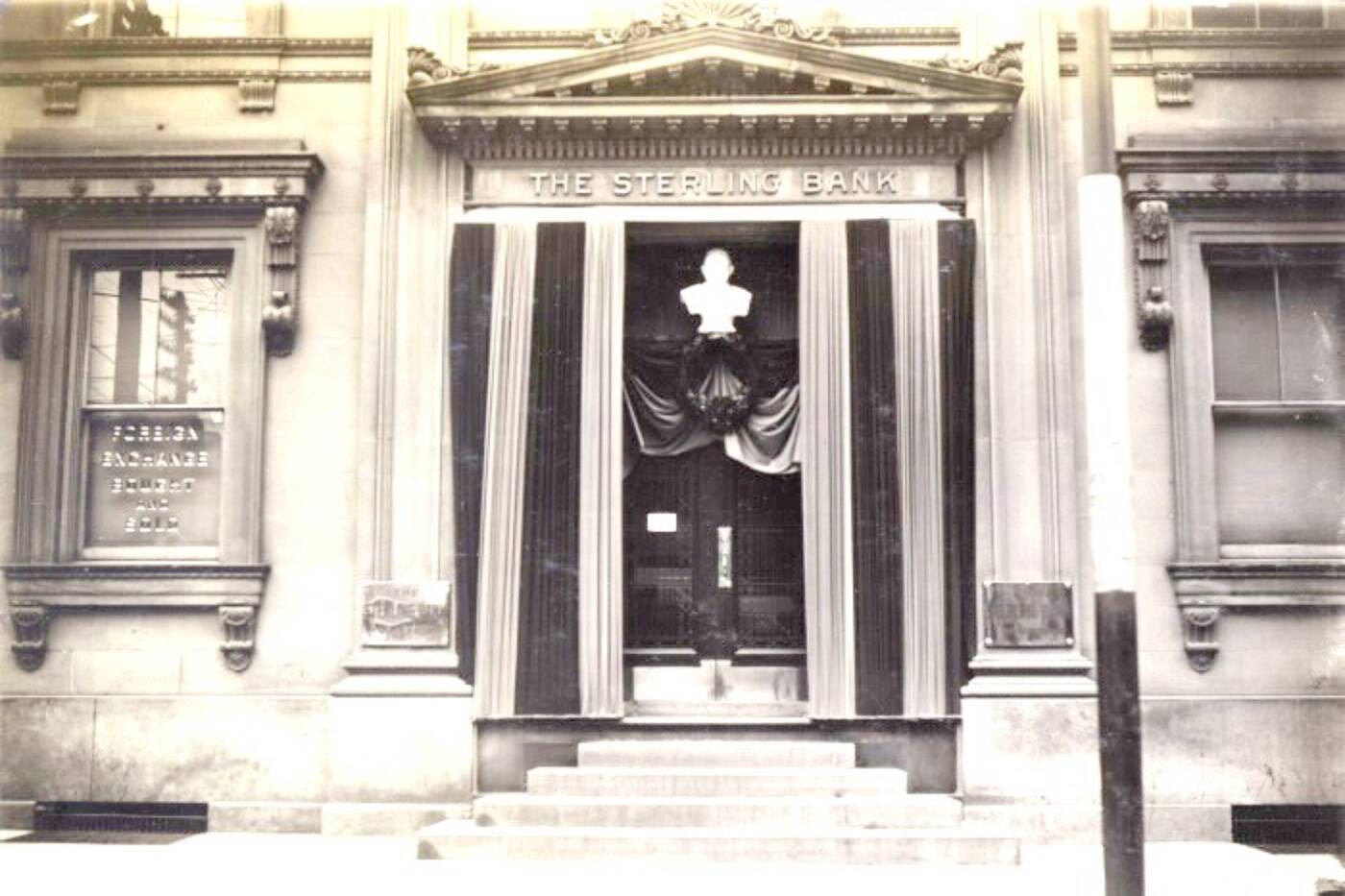 The front door of the Cawthra House in 1910, when the building was a branch of the Sterling Bank, Toronto Public Library, r- 6227.

However, the Canada Life Assurance Company, whose head office was next door on King Street, eventually bought the property and rented it to the banks.

In 1929, the insurance company relocated to a new art deco building on University Avenue, north of Queen Street. 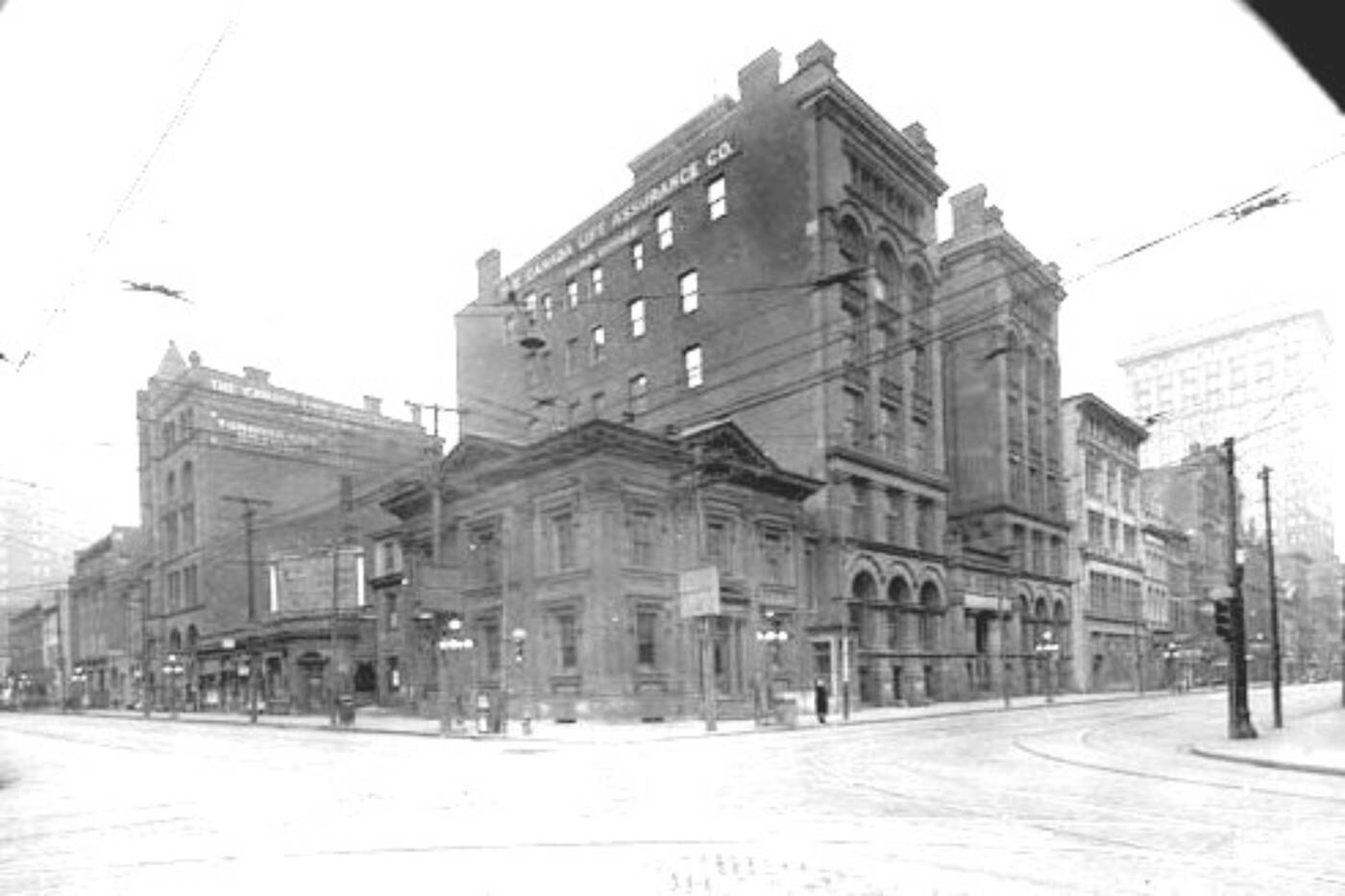 The sites of the old Cawthra House and the Canada Life building were bought by the Bank of Nova Scotia, which wanted to build a 27-storey office tower at King and Bay.

The plans for the bank were shelved because of the Depression, only to be revived in the late-1940s.

Every effort was explored to preserve the Cawthra House because of its architectural merits and historical importance. A member of the Cawthra family offered to pay the cost of dismantling the building and re-erecting on the property of the Royal Ontario Museum.

But the museum refused the offer, and the house was demolished. 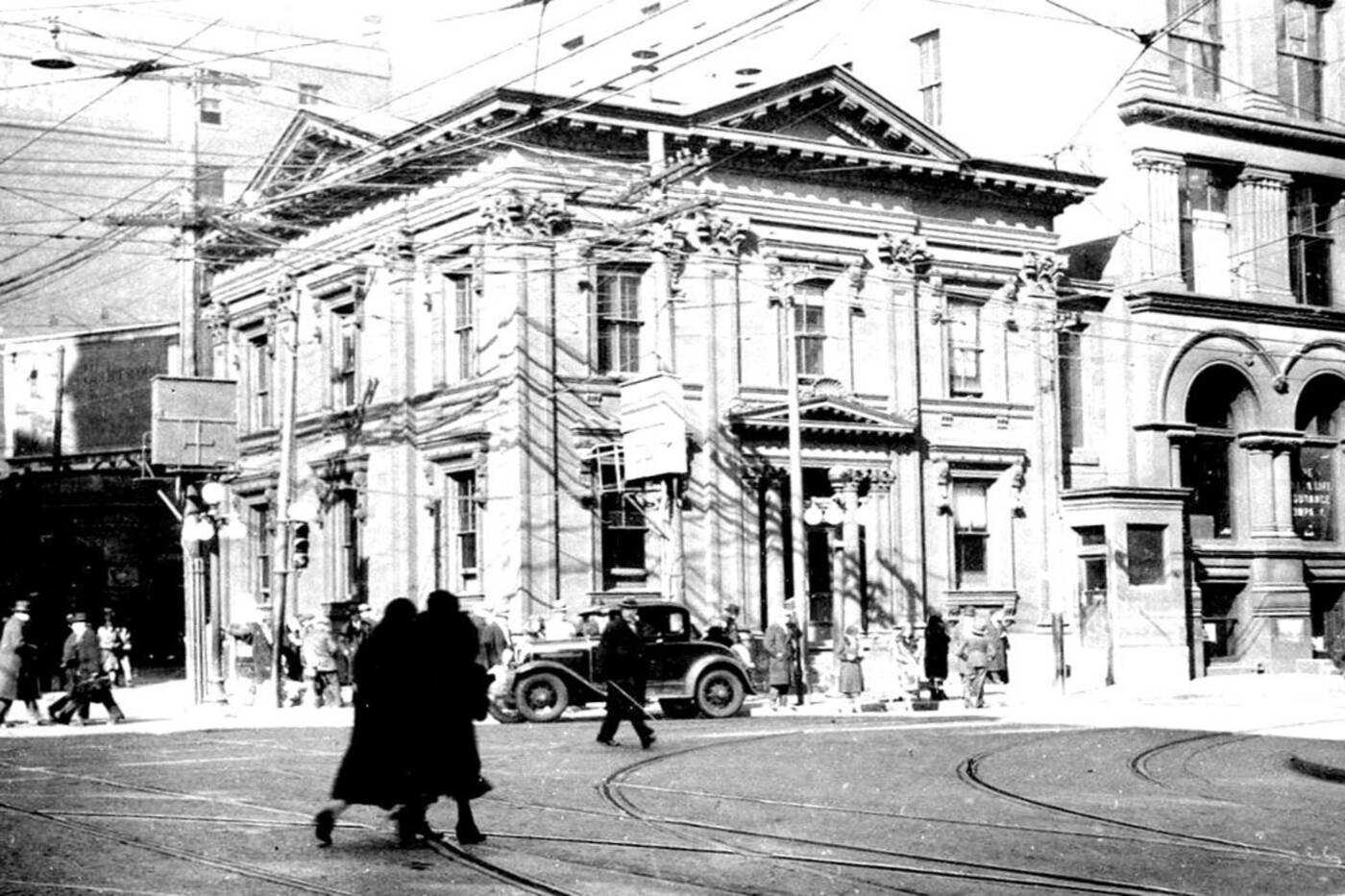 The mantel from the drawing room and the stone columns on either side of the doorway were saved, and placed in the garden of Joseph Cawthra’s estate in Port Credit.

Other parts of the house were rescued by a descendant of William Cawthra, and placed in the backyard of his home in Rosedale. 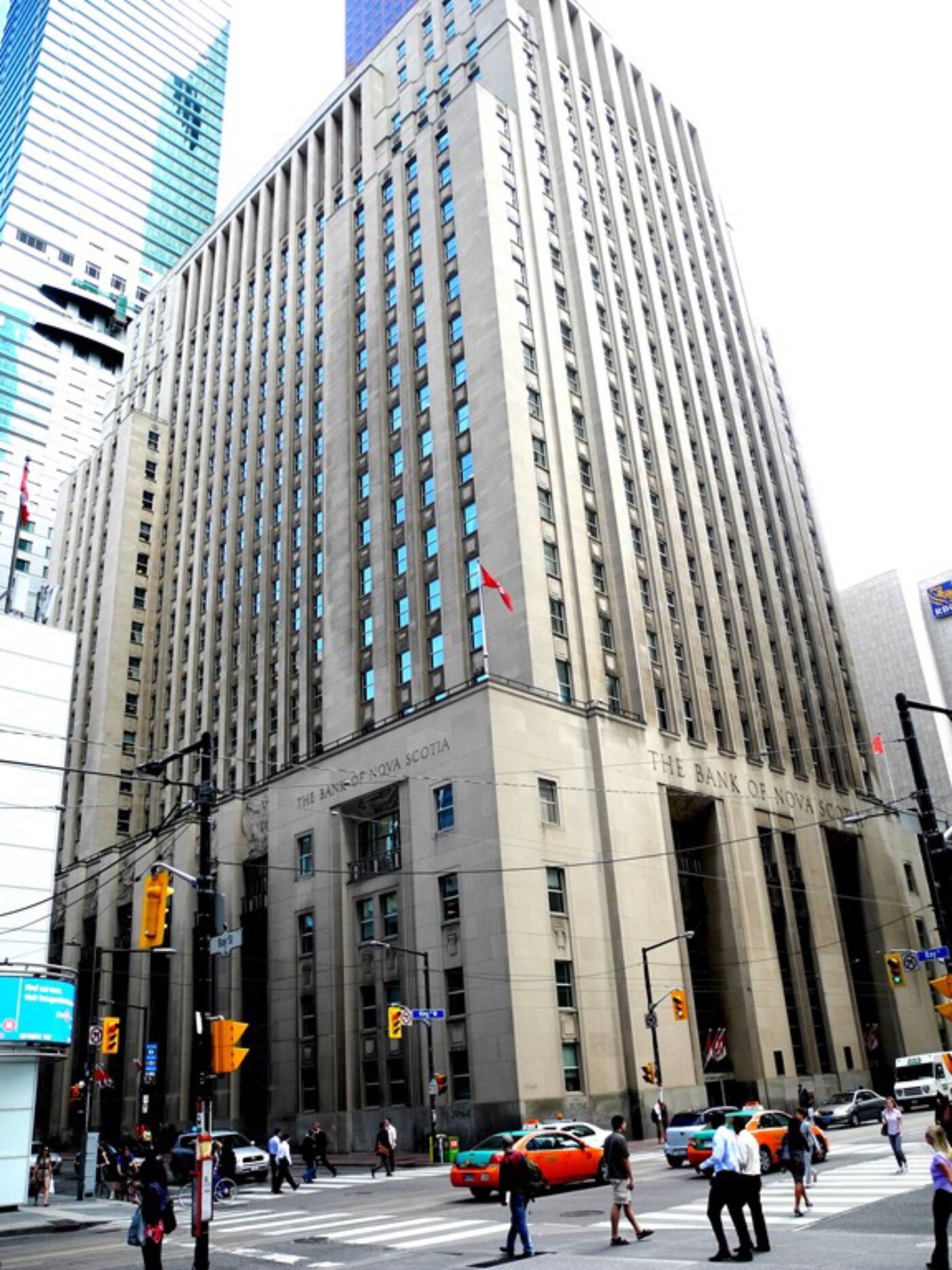 The Bank of Nova Scotia on the northeast corner of King and Bay Streets, occupying the site where the Cawthra mansion once stood.

In 1949, after the demolition of Cawthra House, the cornerstone for the 24-storey Bank of Nova Scotia was laid, and the building was completed in 1951.

Doug Taylor was a teacher, historian, author and artist who wrote extensively about Toronto history on tayloronhistory.com. This article first appeared on his site on February 19, 2016 and has been republished here with the permission of his estate. The article has been modified slightly.