A Toronto home with a waterfront view is a somewhat rare and coveted asset — that is, if we're talking about a southfacing unit in a condo along Lake Ontario, and not a house next to the accidental "lake" that residents of one Toronto neighbourhood have been dealing with for years.

Lake Leaside is the not-so-loving epithet that residents have given to the giant pool of muddy water that has accumulated at a construction site on Wicksteed Ave. near Laird and Eglinton.

The site was meant to become a new shopping centre, plans for which were set into motion all the way back in 2012. But, construction was halted in its early stages, leaving a huge hole in the ground that has since filled up and become an eyesore.

Ward 15—Don Valley West City Councillor Jaye Robinson has been among those trying to get the developer to drain the swamp — literally — and either continue with the project or backfill the hole so it is no longer a hideous hazard.

"It is unacceptable that this property has been allowed to fall into such an egregious state of disrepair for so long," Robinson wrote in a post to a community Facebook group earlier this month in which she called the pit "not only a visual blight, but also a serious health and safety concern." 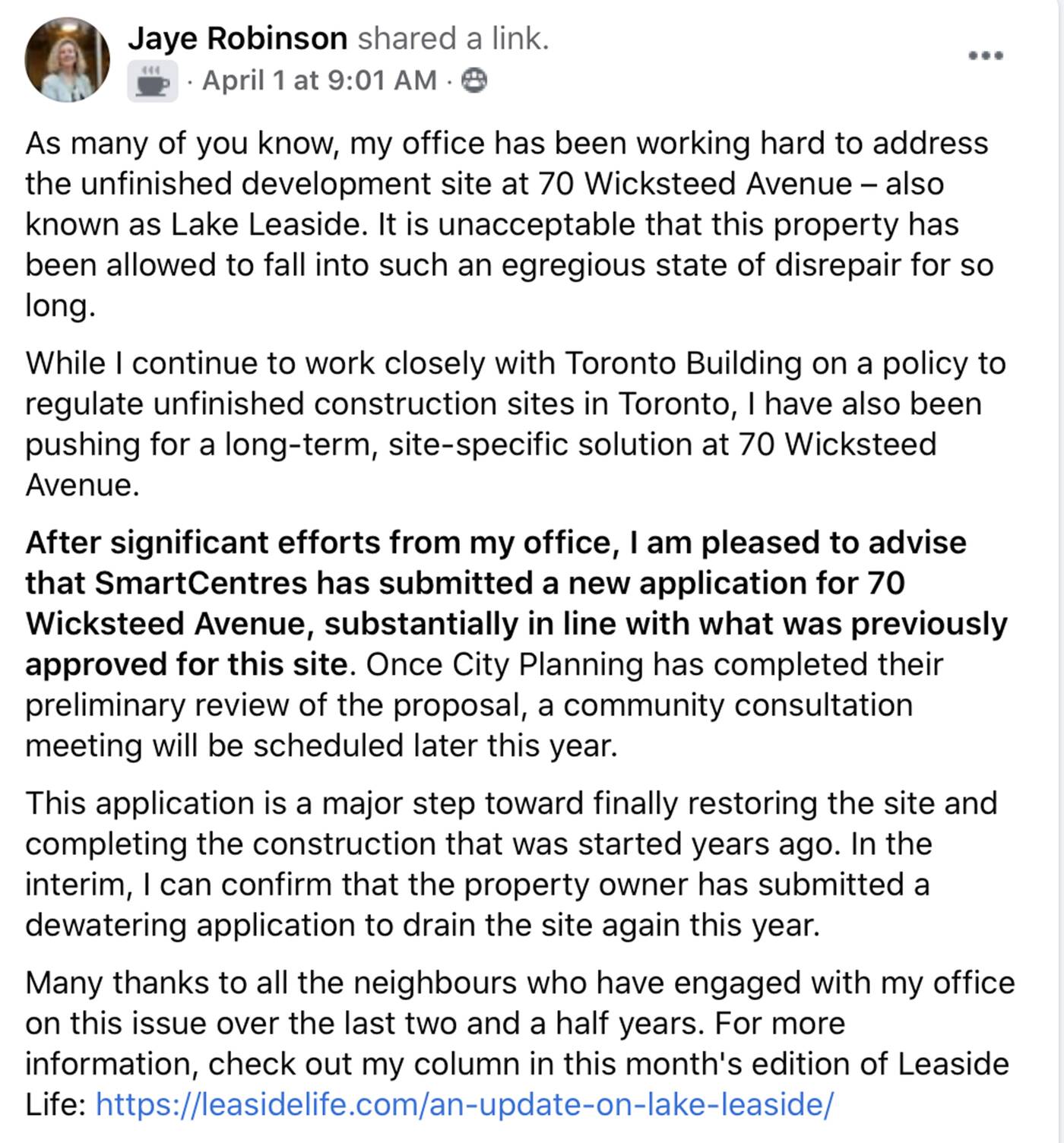 Thankfully, that same post stated that her years of work since taking her post in 2018 have finally paid off: SmartCentres has indeed just decided to return to the site and get to building a plaza once more, and has recently submitted a new application for developing the lot at 70 Wicksteed that is similar to the one they presented almost a decade ago.

As the process gets underway, the site will be drained of water sometime before the year is up.

A community consultation for the redevelopment is also apparently scheduled for later in the year, but it's pretty safe to assume that nearly all will be on board to get rid of the unwanted "lake" as soon as possible.

As Robinson noted in a column on the topic, she aims to work toward fixing the gap that allows developers to sit on projects for so long, leaving land vacant and useless in the meantime, which can clearly be many years.

"Many thanks to all the neighbours who engaged with my office on this file over the last two and a half years," she wrote. "It’s been a challenging issue to address, but the end of the Lake Leaside era is finally in sight."