A perhaps little-known fact about Toronto that might pique the interests of unconvential pet enthusiasts and/or anyone who wants their own farm fresh eggs for breakfast is the city's UrbanHensTO program, through which residents can raise their own chickens.

Started in 2018, the quirky pilot permits people living in four zones of the city to keep up to four hens — no roosters allowed — on their property "for the purposes of enjoyment and egg production," not to eat.

One person in the city is currently seeking a unique kind of relationship pertaining to the ownership of such hens.

"Wondering if there is anyone in Pdale with a backyard who wants to become a chicken mom? (Or dad? Or whatever term you prefer)" starts a recent post in the Parkdale Community Updates Facbook group, which has around 5,600 members and counting.

"So long as you agree, and your neighbours aren't jerks, we can have some fresh eggs (eventually) and a satisfying new hobby." 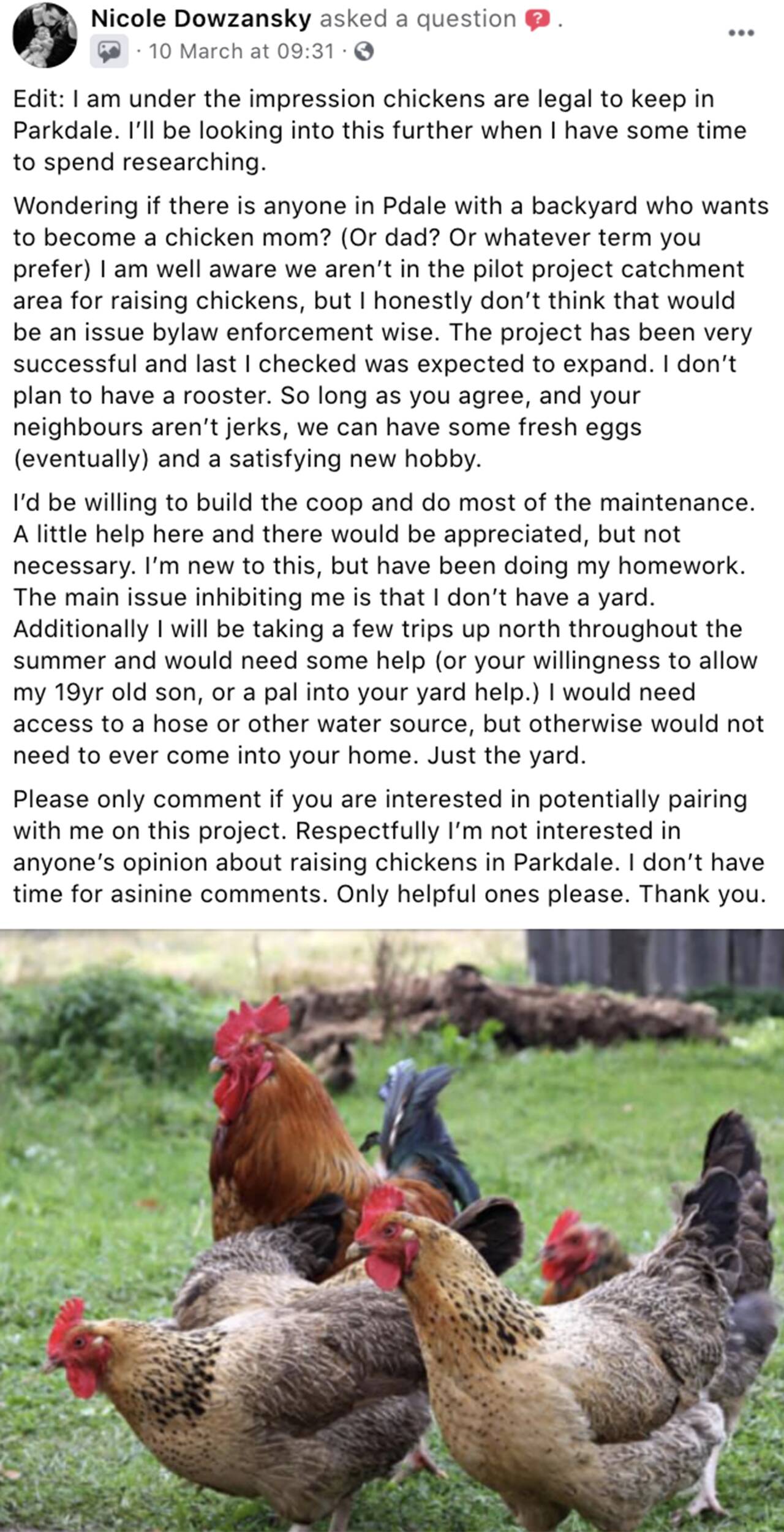 The call for a chicken co-parent comes from local Nicole Dowzansky, a former bar and venue owner who though enthusiastic about the idea of the feathered friends, does not herself have a backyard.

Dowzansky says that she was inspired to look into the program because of the high cost of good quality eggs from happy chickens, along with her concerns for the impacts of eating the way we do and consuming products that come from environmentally devastating and just plain cruel factory farming practices.

"There are things one can do even in a urban environment to promote a permaculture sort of lifestyle. Practicing animal husbandry is one of them," she tells blogTO.

"I also grow some vegetables and herbs each summer. The gratification I get from doing so is unmatched. There's nothing like eating a meal comprised of things you grew, caught or otherwise provided for yourself. It's very rewarding."

Unfortunately, her lack of outdoor space means the need for a partner in her chicken endeavours — primarily to provide yard space, and whichever other obligations they would want to take on beyond that.

Nearly a month into her search, she's already found one likeminded neighbour who has also made the foray into making and growing their own food. Unfortunately, their yard is too small for chickens, who Dowzansky says she would want to be able to root around and peck in the grass.

As such, the duo are now looking into raising quail instead, as they require less space and there are fewer restrictions and regulations around doing so in Toronto. (Technically, Parkdale falls outside of the bounds of hen-keeping anyways, though Dowzansky may still be open to the idea if a suitable yard presents itself.)

Given the excitement the initial post garnered — among the comments were calls for "chickendale forever" and gushes about wanting backyard chickens "so bad" — and the fact that many people are out of work and re-assessing their entire lives amid extended lockdown, the duo probably won't be alone in raising backyard birds in T.O. this summer.

Among the city's rules and suggestions for henkeeping are the fact that owners are not supposed to eat the hens nor give their eggs away to anyone else, are asked seek the assistance of a suitable veteranarian before purchasing the animals, and are advised to get at least two chickens because of their social nature.