Angelina Coccimiglio has an eye for trash.

Having collected handwritten notes she's found around Toronto for nine years now, Coccimiglio has developed somewhat of a knack for finding cool treasures among the many receipts and random pieces of sidewalk litter around the city.

"Trust me, there's no shortage of fun stuff to find on the ground if you're just looking for it," the 32-year-old U of T social work student told blogTO. 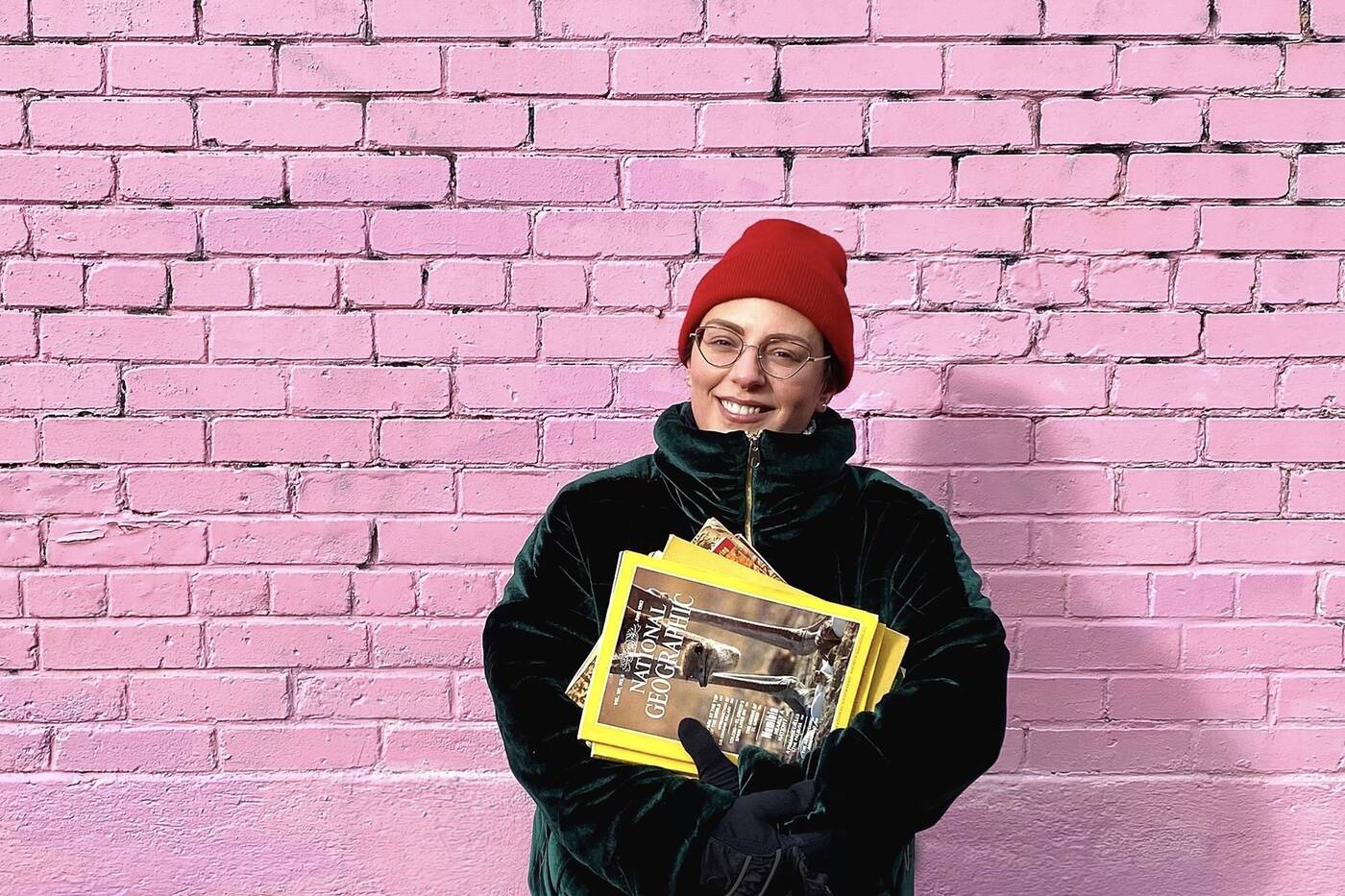 Angelina Coccimiglio holding a recent street find of old National Geographic which she uses for collages.

Coccimiglio can still remember the note that started it all back when she first moved to Toronto from Halifax to study fine arts at York.

"It was on the stairs of the Sheppard subway station and it was a grocery list, but it was in, I think, Arabic," she says. "It was just kind of like this fun little artifact to pick up."

Her almost 10-year-old collection that consists of hundreds of dirty pieces of paper sits in a box just slightly larger than a shoebox and also exists on Instagram as the Eavesdrop Series.

"It's kind of this mode of listening in on what folks are up to. It feels like kind of an intimate preview into a cultural commentary," Coccimiglio says.

"They're not all grocery lists. Some of them are letters, instructions, homework, all kinds of stuff."

One of the most intriguing notes was found recently in March somewhere in the east end. The message: "We would like to talk to you about the couch that caught fire on your porch recently. Please call Dill" was scribbled on the back of a Toronto Police Service business card.

"So many mysterious factors leading to someone leaving that on a business card, then it ending up on the street and then ending up in my hands," Coccimiglio says.

A lot of the other notes Coccimiglio finds are drawings or notes by kids. One of the first ones she ever posted was found around Christie Pits. It's written on a piece of notebook paper by a young writer, by the looks of it, and describes their girlfriend named Coco.

"It's just like this sweet, wholesome, precious little thing."

Coccimiglio is interested both in what’s written down and also how the note has been written whether it's scrawled with a sharpie on the back of an old receipt or elegantly written using a ballpoint pen.

"Those things are interesting to me," she says. "But then also just like the aesthetic of it, some of them are so weathered and worn, or folded in a certain way or just have a certain texture. Just the pure aesthetic of it is really beautiful."

Coccimiglio, who does plenty of art projects and collages in her spare time, has plans to eventually turn some of her collection into physical art pieces to show in a gallery.

"The archiving of them digitally is really just the beginning," she says.

For now, though, she's just enjoying sharing her discoveries.

"I'm so tickled anytime someone's interested in these little artifacts in the same way that I am because I obviously am so deeply fascinated by them."